Encryption arises in the grass, but the elite traditional investment institutions know more about how to enter the field than retail investors, and they are willing to pay for the new things. It can be said that if Harvard, Yale, Stanford and other colleges want to enter the field of encryption, it is better to set up an investment team with themselves, it is better to hand over the funds to Paradigm.

College aura, star team, created less than a year. What kind of organization is Paragigm? The value of the carbon chain will pass this article to tell you the answer.

Paradigm was founded in the middle of 2018, when the market was filled with a mad cow market and a bear market covering the earth. But in this environment, a group of elites gathered together and decided to do a big job. They are Matt Huang, Fred Ehrsam and Charles Noyes.

Paradigm's first founder was Matt Huang, whose story was told by his father, Huang Qifu. Huang Qifu graduated from Stanford University Business School. After graduation, he taught at MIT, Stanford University, and the University of Pennsylvania. In 1989, he obtained a tenure as a tenured professor in Massachusetts. Shortly after obtaining the title of JCPenney's financial professor in 1994, he decided to leave the academic world and enter the investment community. First went to Goldman Sachs, then went to the long-term capital management company as the main partner, engaged in hedge fund management, responsible for the Asia-Pacific business. In the mid-1990s, during the prosperous period of long-term capital, Huang Qifu managed assets equivalent to China's GDP. His opinions will be heard by any central bank governor in the Asia-Pacific region.

As the eldest son of Huang Qifu, Matt Huang stepped up the path of his father, studying at the Department of Mathematics at MIT and going to Goldman Sachs for an internship. Until college, she founded a technology company with her classmates and was acquired by Twitter a few years later.

On February 19, 2014, Fortune exclusively reported on a corner of the US Sequoia Capital is digging Goldman Sachs and Twitter to help manage its sixth phase of the $900-100 million growth fund. Matt Huang is the corner of Twitter that was dug away.

Up to now, Matt Huang's most successful investment is the investment in today's headlines. The investment has grown more than 2,500 times over the six-year period.

Paradigm's second founder is Fred Ehrsam, who is well known in the cryptocurrency market. Fred Ehrsam started as a trader at Goldman Sachs and then joined Coinbase as a co-founder. He then resigned as Coinbase and served only as a member of the board of directors.

Fred Ethrsam met Matt Huang and may also be related to Matt's father, Huang Qifu. After the financial crisis, Huang Qifu announced his retirement due to the miscalculation of the market and the net value reduction. However, after retiring, Huang Qifu was so busy that he and other former financial colleagues and other financial professionals established Starling Ventures in 2011, and Coinbase happened to be one of the projects invested by Starling Ventures.

The company's third founder, Charles Noyes, is an investment director from Pentera Capital. Pentera Capital was established in 2003 by the former Chief Financial Officer and Macro Trading Director of Tiger Fund. In March 2014, Pentera announced an investment center shift to Bitcoin and other digital currency related investments.

The value of the carbon chain is compiled through online public information to organize Paradigm's employee information. As can be seen from the chart below, the small and fine is the style of Paradigm. Even today, the number of employees is still below 10 people. This is similar to Pentera Capital. 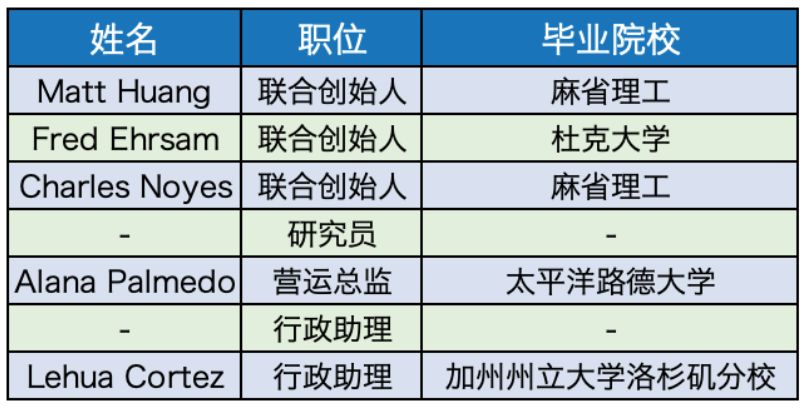 The top universities have begun to turn their attention to the field of cryptocurrency, which is definitely a good thing for cryptocurrencies.

Another investment institution invested by the Yale University Endowment Fund is the more famous a16z crypto than Paradigm.

Harvard University suffered huge losses in the endowment fund because of investment chaos. As a result, the investment department cut half of its employees and replaced the new leadership. The new leadership is now trying to encrypt the currency.

At present, Paradigm has launched its first fund, all from the Yale University Endowment Fund, and invested in the following eight projects:

We can look at the tracks on which these 8 projects are located, as well as other investors in these projects besides Paradigm.

-Uniswap: Uniswap is a decentralized transaction protocol. Allows any user with a network to seamlessly exchange assets with ETH (or ERC20 tokens) through the Metamask wallet. The founder is Hayden Adams, a former mechanical engineer in Siemens in New York. Paradigm has exclusively invested in its seed round financing, amounting to $1 million, to expand the team. Uniswap is also a member of the recent hot DeFi project.

-O(1) Labs: O(1) Labs attempts to rebuild computing systems with encryption and cryptocurrency, and currently develops Coda, a cryptocurrency protocol. His seed round investment was funded by Fred Ehrsam, Polychain Capital and MetaStable Capital, and Coinbase Ventures, General Catalyst and Accomplice participated in the A round of investment. It can be seen from the investors that the project deserves special attention.

-Numerai: Numerai is a company that provides equity strategies for hedge funds and investment managers, using artificial intelligence for modeling transactions. In 2016, it received Series A financing from First Round Capital, Fred Ehrsam and Union Square Ventures.

-Tendermint: Founded in 2014, Tendermint is the parent company of Cosmos, dedicated to the infrastructure of the token economy. The A round of financing comes from Bain Capital and 1confirmation, which is mainly used for team expansion and development of the Cosmos network and ecosystem.

-Tagomi: Tagomi is a cryptocurrency e-broker service provider that provides institutional investors with brokerage services in Bitcoin, Ethereum and other cryptocurrencies. Its co-founder and CTO is Greg Tusar, who is the former head of electronic trading at Goldman Sachs. A total of two funds were raised, totaling approximately $28 million, with investors including Pantera Capital, Collaborative Fund, Digital Currency Group, Elad Gil, Founders Fund, Joe Lonsdale and SV Angel.

-Veil: Veil is a peer-to-peer trading platform based on Augur and 0x for forecasting markets and derivatives. The seed round investment comes from 1confirmation and Sequoia Capital.

-StarkWare: StarkWare is an Israeli blockchain privacy solution provider. A total of four founders are chief scientists and developers in the blockchain field. Eli Ben Sasson and Alessandro Chiesa are both founders of Zcash. This is one of the reasons why Zcash and StarkWare work together. Uri Kolodny is the CEO of several technology companies. Micheal Riabzev has worked in Intel and IBM research laboratories with 14 years of development experience and is a developer of the Zcash-StarkWare system. Intel Capital, which is less common in investment blockchain projects, is also involved in investing in StarkWare, which is also a recognition of Micheal Riabzev's development technology.

Through the above information, we can easily find that there are inextricable links between the co-investors of these eight projects, and most of them are established investment institutions. For example, investors in these projects flashed Coinbase, Union Square Ventures, Pantera Capital, Sequoia Capital, Polychain Capital, and Matt Huang and Fred Ehrsam. Although Paradigm is a newly established investment fund, the three co-founders have let the investment agency exude the taste of veteran encryption investment institutions.

Perhaps this is one of the reasons why wealth flows forever. Encryption arises in the grass, but the elite traditional investment institutions know more about how to enter the field than retail investors, and they are willing to pay for the new things. It can be said that if Harvard, Yale, Stanford and other colleges want to enter the field of encryption, it is better to set up an investment team with themselves, it is better to hand over the funds to Paradigm.

[7].Why Is Harvard's Endowment Jumping Into Crypto?.https://www.investopedia.com/why-is-harvard-s-endowment-jumping-into-crypto-4684672

May 6 madman market analysis: trump or re-launched against BTC to take the upper US dollar?

In line with policy, Block.one hires former head of Congressional Relations to support its blockchain activities