This is the 48th original article brought to you by HeartBit

The original text was partially deleted during translation

Recently, Bitcoin and the entire currency circle have shown signs of picking up. Bitcoin has been shaking from a minimum of $ 3,800 to about $ 7,500.

Especially in these two days, the halving of BCH and BSV is approaching (BCH has halved yesterday, and BSV will halve it on April 10), which brings a little hope to the quiet currency circle.

Three weeks ago, due to the epidemic and the collapse of the global commodity market, the price of Bitcoin plummeted by more than 40% within a few days:

The coin circle has been shocked for 24 hours: behind Bitcoin's 50% plunge, these figures are the highest in history

In the face of this plunging performance of Bitcoin, many financial analysts began to laugh at Bitcoin, which is the ace of cryptocurrency, because it obviously cannot maintain its value in the crisis.

There are also many people in the currency circle who are equally skeptical.

In response, Bitcoin proponents proved (or proven) that Bitcoin is actually a stronger safe-haven asset than stocks and gold by providing some data comparing Bitcoin with other assets.

Only when you are calm can you draw a more accurate conclusion.

1. In this crisis, Bitcoin performed well

An analyst named Willy Woo posted a chart on his Twitter that compares the price movements of the S & P 500, gold and Bitcoin over the past five years.

By comparison, it has been found that the price of Bitcoin has risen tremendously in the past five years, with the highest point increasing by 12200% compared with the lowest point.

Within this framework of increase, Bitcoin's recent decline is not so large. 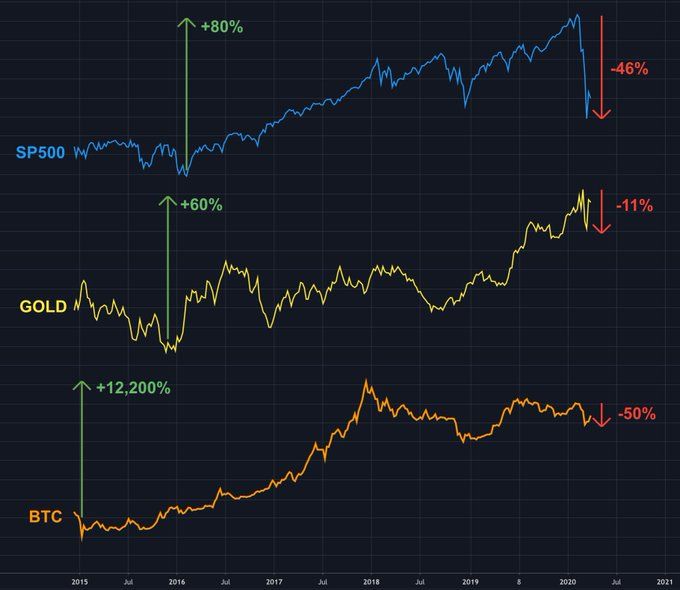 From the graph, we can see that compared with the decline of the S & P 500 and gold, Bitcoin has fallen by 50%, which seems to be the largest of the three.

This is the biggest crisis that Bitcoin will encounter since its birth. This crisis is comparable to the "Great Depression" of the year … This is the first major test of the properties of Bitcoin's safe-haven assets.

For this comparison of Woo, bitcoin critics may point out the fact that bitcoin investors have made little profit in bitcoin investment in recent times.

However, we can find from the data comparison that the continuous investment in Bitcoin in the past few years is still a wise choice.

Because of the recent decline in the global financial market, the US stock market has actually fallen back to the level of 2015, and even if Bitcoin has fallen more, it has maintained a doubled value growth in comparison.

Simply put, Bitcoin's recent decline is not as "tragic" as US stocks or gold.

Meanwhile, another Bitcoin believer, Sylvain Saurel, recently published an article on the social blog Medium, comparing Bitcoin's performance with gold and the stock market over the past 12 months.

In his analysis, Bitcoin once again proved to be the best investment option to date, and none of them.

On the one hand, the stock market represented by Dow Jones and the S & P 500 has lost most of its value, and gold, as a traditional safe-haven asset, has risen 25%.

On the other hand, since the same period last year, the price of Bitcoin has risen by 35%, and from the current point of view, it is ready to break through again.

2. Cryptocurrencies are risky, but technically safe

Others who are skeptical of Bitcoin usually throw the argument that there is no backing behind Bitcoin to support its value, and the rise of Bitcoin's value depends entirely on the interest of its investors.

This argument is only valid to a certain extent, because the value of Bitcoin is not entirely dependent on the interest of investors, but the core is its practicality in the financial system.

The blockchain's peer-to-peer architecture allows Bitcoin to circulate freely around the world without the need for centralized intermediaries.

In addition, through encryption technology, Bitcoin, which exists as an asset, has high security.

Because of these characteristics, Bitcoin has practical value that traditional assets are far from realizing.

In short, Bitcoin and other blockchain platforms have created a new kind of asset for the world, and this kind of asset is increasingly proven to be used in practical applications.

To this day, even the strongest opponents of Bitcoin have begun to recognize the potential value of distributed ledgers because it can make the world more secure and efficient.

Therefore, there is no doubt that investing in bitcoin has been proven to be able to achieve greater returns.

We can speculate that as the usage of blockchain increases, the value of cryptocurrencies will also increase.

Regarding Bitcoin's performance in this crisis, what are your views? Welcome to express your views and discuss with us.