In late March, with the spread of the new coronavirus in more and more countries and regions around the world, people ’s daily behaviors have changed because of the epidemic, reducing contact, keeping distance, and avoiding viral infections. This is reflected in consumer payments. Countries and regions began to accept contactless payment methods to replace the previous contact payment: cash payment and password card payment. Whether this change is a temporary measure or a permanent customization, it will inevitably affect the future payment methods and market structure, and also provide some inspiration for the ongoing development of CBDC.

The contactless payment ceiling for other countries is also gradually increasing: the contactless payment ceiling for Canada ’s MasterCard and Visa in Canada was raised from $ 100 to $ 250 in early April. Australian payment industry self-governing organization AusPayNet announced that the non-contact payment limit during the outbreak has been increased from AUD 100 to AUD 200.

MasterCard also announced its support for increasing the contactless payment limit in the Middle East and Africa.

The contactless card was born in the early 1990s. Its technical feature is to combine radio frequency identification technology and IC chip card technology to solve the problem of passive (no power in the card) and contact-free. As a new electronic technology, it has high reliability (no physical contact with the card reading device, avoiding various failures and damage caused by contact reading and writing), convenient and fast operation (no directionality when using the card, transaction Speed ​​is half faster than contact card), good encryption performance (the card serial number is unique, three-way two-way verification before transaction processing), anti-collision mechanism (prevent data interference, card reader can process multiple cards at the same time), data retention time Long (erase data 100,000 times, save 10 years) and other advantages, but also can be used for one card, you can set different passwords and access conditions on the same card.

Before the epidemic, when using contactless cards, due to security considerations, a certain amount of password-free limit was set for small payments, so you can enter the device without touching the password of the payment terminal. For example, the original contactless card payment limit in the UK was £ 30. According to market prices, a cup of latte ￡ 2, a burger ￡ 7, and a taxi ￡ 20 These are daily high-frequency consumption, which has relatively high time requirements. The use of secret-free functions can increase the speed of payment and enhance the consumer experience. After the epidemic broke out, this security-free limit not only provided the above convenience, but also brought unexpected benefits: Because payments within the limit do not need to contact the password entry device, and the payment processing time is shortened, the crowd focus is reduced, which is helpful to prevent The new crown virus infection makes consumers feel safe and at ease. Therefore, this payment method is welcomed by the government, health departments, merchants and consumers. The increase of the confidentiality limit is just to meet the needs of more people using this payment method during the epidemic.

Non-contact payment in a broad sense should also include online payment. From the selection of goods or services, completion of payment, logistics delivery to home delivery, the whole process can be completely achieved without contact. The vast majority of Chinese netizens have already experienced the peace of mind brought about by the full contactlessness when the epidemic is worst. Now contactless online shopping is also increasingly popular with consumers in many countries and regions around the world.

Noon, a well-known e-commerce platform in the Middle East, joined forces with Visa to provide 10% discount for new customers in the UAE and Saudi Arabia. Since the outbreak of the new crown epidemic, consumers in the UAE and Saudi Arabia have demanded a surge in the demand for home delivery. Noon has developed some preventive measures, such as canceling cash on delivery, accepting only prepaid goods, adding a "contactless receipt" option on the checkout page, disinfecting storage facilities and cargo packaging, monitoring the health of warehouses and delivery personnel, and preventing viruses propagation.

In mid-to-late March, Finnish e-commerce sales surged by 60% due to measures taken by the Finnish government to block the capital area, restrict border traffic, ban meetings for more than 10 people, and close schools, and urged the public to stay at home as much as possible.

According to the monitoring of App Annie, a mobile application data analysis agency, the global shopping app downloads reached 106 million times during the week from March 29 to April 4. Among them, the average daily downloads of Wal-Mart apps increased by 460% compared with January, ranking the United States. Shopping app first. While vigorously promoting online shopping, Wal-Mart also provides contactless services for offline shopping customers. For example, self-service checkout is changed from a touch screen to scanning a QR code, and the procedure for assisting customers to ship goods is changed to a non-contact method.

3. Stimulate the economy with digital currency on the government agenda

The new crown epidemic has given us a direct and perceptual understanding of the "helicopter spitting money" that used to stay only at the conceptual level. Governments of various countries have formulated economic rescue plans for individual residents, but through which channels or payment methods to distribute these benefits to the public, it has become a very real problem.

On March 27, the US House of Representatives voted to pass the $ 2 trillion economic stimulus bill. The 880-page bill regarding direct financial assistance to individuals is: According to the tax return of the filer in 2019 and the information in 2018 (if there is no tax return), it is issued to adults with an annual income of less than $ 75,000 A cash check of 1200 USD, 500 USD per child.

According to Elaine Mag, a Brookings tax policy research expert, as many as 10 million low-income, childless adults in the United States are eligible for government subsidies, but they may not be able to fall off the sky for various reasons. The pie: Because low-income people do not file taxes, the tax department does not have their information, they cannot verify their income, and they cannot find them, even if they send them by check. In view of the experience when similar policies were introduced in 2008, it took 3-9 weeks to issue cheques. The epidemic encountered this time is different from the financial crisis in 2008 and cannot be picked up on site for emergency. In addition, according to a survey by the University of Michigan, in 2008, only 20% of the economic relief provided by the government to individuals used cheques to purchase new assets, 48% paid off existing debt, and the rest were used for savings. Obviously, traditional payment methods are powerless to accurately implement monetary and fiscal policies.

To this end, the initial draft proposals of the two parties in Congress proposed the establishment of a digital dollar wallet, through which the government relief payments using digital dollars as payment means were issued. This is the first time that US lawmakers formally proposed the concept of digital dollars. Although it does not have the conditions for implementation, it has not entered the formally passed bill, but it shows that in the era of rapid development of information technology, the traditional payment system needs to make major changes. As former New York Federal Reserve official and Prosperity Foundation executive Ezechiel Copic said, “Embracing the power of technology and incorporating a mechanism similar to digital dollars into the stimulus response is a much-needed step in the right direction.” The central bank's digital currency not only has the advantages of improving distribution efficiency and financial inclusion, it can bring new weather to the effective transmission and implementation of monetary and fiscal policies through the programmability of smart contracts, especially in response to the new crown plague This special scene.

4. Enlightenment brought by the epidemic situation and non-contact methods to the reform of the official payment system

The Bank of International Settlements Auer and others recently published an article on the new crown epidemic that will have a double impact on the development of future payment methods. First, the epidemic epidemic highlights the importance of central bank digital currency. It should have a unique advantage in broad versatility. Support the inclusion of all levels of society, especially those without bank accounts. There are 1.7 billion people in this category in the world. The future CBDC design must consider the characteristics and needs of these people. According to the World Bank's 2017 Findex report, in developing countries, only 40% of adults or about half of mobile phone users can use their own mobile phones and access the Internet. Those who do not have mobile phones or cannot access the Internet will not only not enjoy the benefits of new payment technologies in the future, but may accelerate poverty due to the digital divide ; second, the pandemic of the New Crown Infectious Disease has stimulated the development of the contactless payment economy. The CBDC design should consider this special scenario of plague. Judging from some current CBDC design schemes, code scanning, near-field payment, and face scanning are all contactless payment methods. But in some scenarios where cash is exchanged with CBDC, have you considered embedding contactless methods? For example, when you use cash to exchange CBDC from a teller machine, or when you exchange CBDC in your wallet for cash.

In addition, the official has always been concerned that private institutions have eroded the payment market and caused serious fragmentation of the market. During the outbreak, it may be intensified by the survival of the fittest. The deputy governor of the French Central Bank Dennis Bo mentioned in a recent speech that the EU has nearly 2 / 3 Bank card payments (especially cross-border transactions) are settled using the international payment methods of Visa and MasterCard, and 18 countries rely entirely on this method to process their domestic transactions. And restricting the use of certain proprietary technologies, such as sensors or payment acceptance software used in near-field payments, will also hinder free competition. In the mobile payment market, the dependence on Apple and Samsung operating systems is very obvious. These are very disadvantageous for the disadvantaged. For example, they have to spend another sum of money to replace the mobile phones that can be used for payment. Maintain a payment solution that takes into account the needs of many types of people, including protecting the existence and use of cash, and issuing new central bank currencies that are indiscriminately oriented to the whole society. Mobile device compatibility should be considered in the design of CBDC. This is the future development direction of the official payment system reform.

Cardano founder: Bitcoin will break through in the future, even breaking 100,000

Looking back at the history of the conversion of bulls and bears, what year is the most striking similarity in 2019?

Coin Bear Xiong: Only the mining pool business is closed, other businesses are normal

Risk capitalist Tim Draper: It is expected that OpenNode will be widely used in the future. 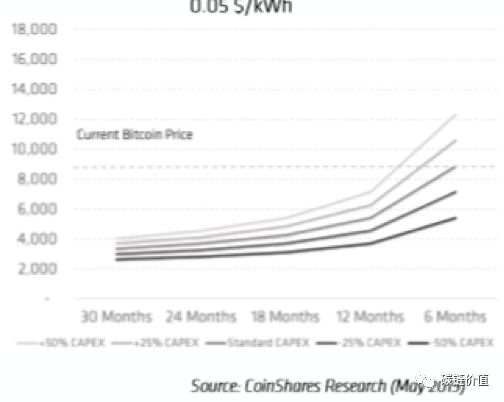