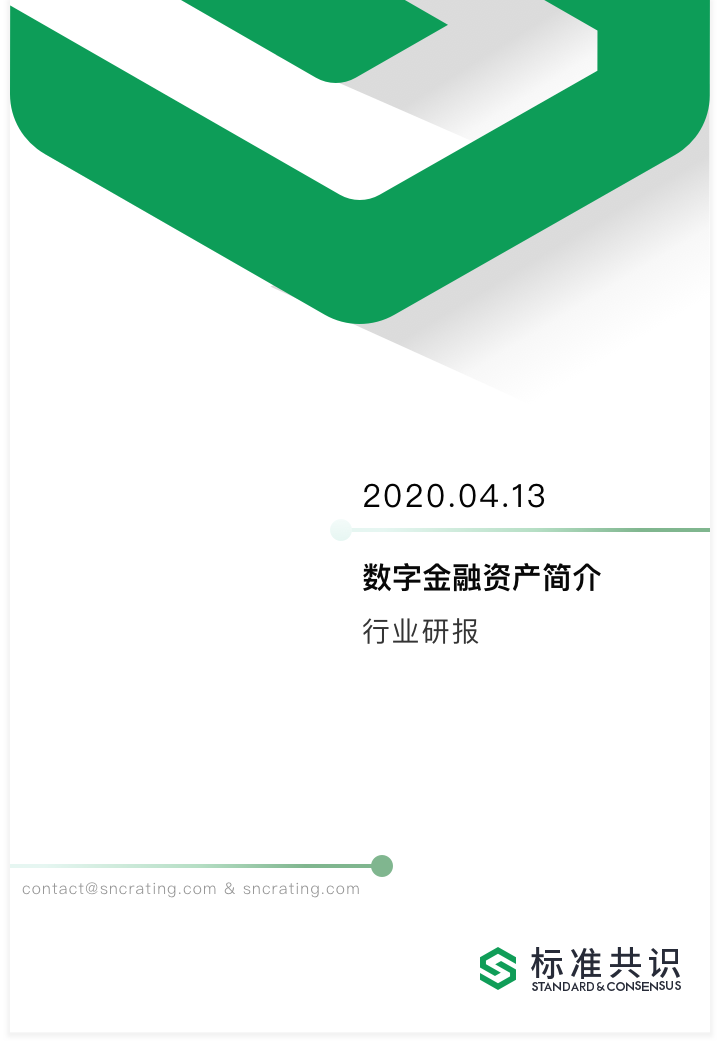 This article will start with derivatives and outline the future trends of the digital financial asset market.

Despite the continued stagnation of the crypto market, tens of thousands of cash predators and fraudulent ICOs appeared in the cryptocurrency market that continued to rise in 2017. In 2018, the strengthening of cryptocurrency supervision in various countries made ICO gradually come to an end.

One of the advancements is the introduction of cryptocurrency derivatives, which is a brand new financial product series. The degree of similarity between the cryptocurrency market and traditional financial markets will be higher and higher. In this wild west market, only by establishing rules first can we help the market continue to grow.

This is where the traditional market can learn from the cryptocurrency market. In fact, the industry has begun to move closer to mainstream financial markets, one of which is crypto derivatives. Derivatives have proven to be useful in the stock market, and even the financial crisis has not diminished its popularity: for example, according to research by the Milken Institute, between 2003 and 2012, The quarterly growth was approximately US $ 3.7 billion.

Back in the context of cryptocurrencies, the value of derivatives comes from the foundation of cryptocurrencies. In other words, it is a protocol to buy or sell a specific cryptocurrency at a fixed price at some time in the future. Its most popular form—Bitcoin Futures—was launched on two US exchanges. In December 2017, the bitcoin futures launched by the Chicago Mercantile Exchange (CME) and the Chicago Board Options Exchange (CBOE), two leading and diversified derivatives markets in the United States, largely eliminated Bitcoin as the Internet edge Stigma of assets and Ponzi schemes. 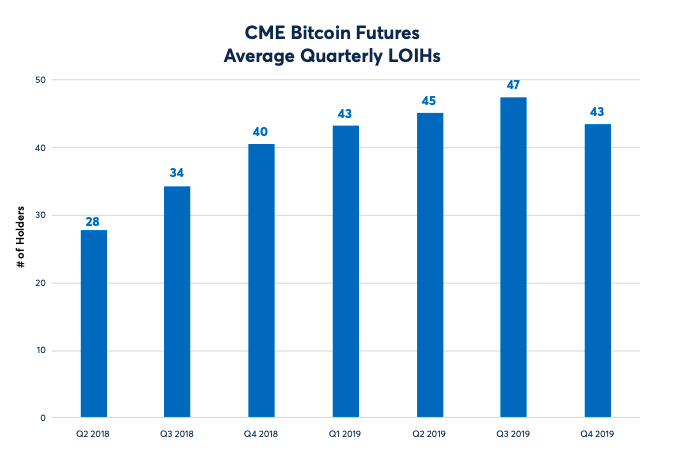 It is worth noting that the demand for such products has not only remained unchanged, but also growing: in fact, June 2019 was the month with the largest trading volume since the Chicago Mercantile Exchange launched bitcoin futures. Nearly 300,000 contracts were transacted within 31 days, an increase of 27% from the previous month and an increase of 73.69% from March.

Since then, the exchange has applied to the US Commodity Futures Trading Commission (CTFC) to double its position limit. The company also recently confirmed that a new tool will continue to be launched, namely Bitcoin futures options.

Because derivatives represent a maturity of risk management, derivatives are particularly important for institutions: they reduce risk exposure and protect them from the high volatility of cryptocurrencies (volatility affects blue chip investors and businesses It is a huge red flag). In addition, they allow traders to offset potential losses through "put options" and hedging.

In 2018, the crypto futures market really took off. Compared with the level in 2017, the capacity of the encryption market has increased by 10 times-2017 is generally regarded as the peak of the encryption market. According to data compiled by skew and Bitwise, the current transaction volume of Bitcoin futures and other permanent swap instruments is on average 10 times higher than the underlying Bitcoin spot market. 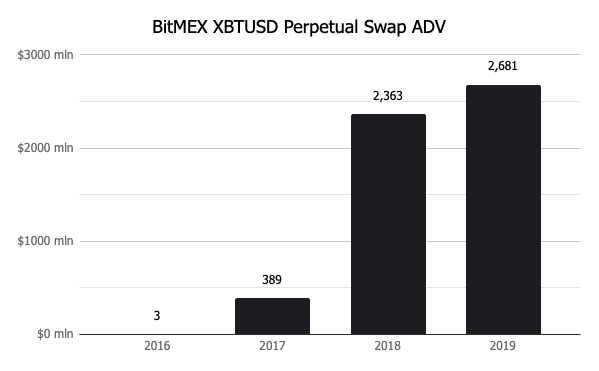 Reasons for the popularity of derivatives

In hindsight, the reason for the popularity of derivatives is relatively simple. As the market entered a long downturn from 2018, market participants began to look for ways to profit or hedge from falling prices. The growth of the futures market comes from the demand of the short market.

The fact that Bitcoin is highly volatile has always been a consensus in the circle, so many people think that Bitcoin is not suitable as a monetary transaction medium. This triggered a wave of "stable currency" projects in 2017 and 2018. Structurally speaking, Bitcoin's inelastic supply function is not interested in demand or supply shocks-all adjustments are made through prices, resulting in volatility.

This logic is but not necessarily correct in practice. For example, this view also applies to gold, which is one of the least volatile assets. According to data from the Federal Reserve of Saint Louis, the average daily volatility of gold in 2019 is 0.6%.

There are many factors that cause asset volatility. One of them is its market structure. Scholars have extensively studied the impact of the development of the derivatives market on the volatility of underlying assets, and agreed that derivatives help stabilize prices.

This is especially true for options, because when investors seek to generate additional income, the flow of funds is usually dominated by call option coverage (selling call options to cover the underlying position). As these markets continue to grow, Bitcoin's volatility will structurally decline.

Derivatives represented by options are financial contracts between two or more participants, which are derived from basic assets. More specifically, it is an agreement to buy or sell a certain asset at a predetermined price in the future-whether it is stock or cryptocurrency. Derivatives themselves have no intrinsic value or direct value; the value of derivative contracts is purely based on the expected future price changes of relevant cryptocurrencies.

There are three common types of financial derivatives:

Swap: A swap refers to an arrangement in which the two parties exchange a series of cash flows in the future, usually based on interest-bearing instruments such as loans, bonds, or notes. The most common form of swaps is interest rate swaps. This involves converting future fixed-rate cash flows into floating-rate cash flows between two different counterparties.

Futures: Financial contracts where the buyer is obliged to purchase assets or the seller is obliged to sell assets (such as commodities) at a fixed price and a predetermined future price.

Option: A financial contract in which the buyer has the right (but not the obligation) to purchase an asset, or the seller sells an asset at a predetermined price for a specified period of time.

The role of derivatives

The fundamental reason for the existence of derivatives is to reduce the risk exposure of individuals and companies and protect themselves from fluctuations in the price of the underlying asset.

For example, a rice farmer may be trying to ensure the sale of products for the next season. Since the price of rice fluctuates with changes in market conditions every day, the farmers who grow rice are keen to determine the harvest price for the next year so that he can be protected from daily price fluctuations. Companies also need to use derivatives to reduce risk exposure. A bakery trying to buy wheat flour from farmers will use a derivative contract to "lock in" the price of wheat flour for that year. This ensures that the baking company can predict the budget for the current fiscal year and protect itself from fluctuations in wheat prices. It is these derivatives contracts between buyers and sellers that can be traded in the derivatives market.

Investors can also use derivatives to protect their portfolios. This is also known as "hedging", which means taking measures to offset potential losses. Derivatives are an important risk management technique for institutions and investors. The concept of hedging is similar to buying insurance for your portfolio. Hedging can avoid the headaches or worries you may encounter during the investment process. Having a policy that uses derivatives can ensure that you manage your risk well.

The easier way to go short is to use derivative contracts because it is cheaper and "capital efficient." If someone believes that the price of cryptocurrencies is unsustainable, or will soon experience a downward trend, they can sell derivatives contracts on the open market to anyone who does not think so.

Since the transaction is conducted on the basis of margin trading, the derivatives exchange has been carefully designing a spot price index, which is derived from the price of a physically larger physical exchange. The index is used for settlement when the contract expires and determines when to start margin call. This was a smart way to prevent manipulation of crypto derivatives contracts that were not so liquid at the time.

However, with the exponential growth of the derivatives market, we have now entered a period where the underlying spot exchange is much smaller than the derivatives exchange-spot transactions account for only 10% of the total. At this time, attempts to manipulate basic exchanges with poor liquidity to gain some profit in derivatives trading will appear.

This was most evident in early May 2019, when a relatively small order on the bitcoin physical trading platform Bitstamp triggered a wave of bitcoin liquidation, leading to a decline in the entire market. Another compliance issue caused by derivatives is also the most important risk that ordinary traders need to pay attention to when choosing derivatives.

Driven by mining companies, with the support of physical delivery and option contracts, corporate hedging capital flows are taking off. The Mexican government has spent US $ 1 billion in 2019 to buy put options to hedge its 2020 crude oil production. The size of cryptocurrency derivatives will also double as more players participate in the spot. In the highway of compliance and financialization of the cryptocurrency market, the derivatives market is a stop for all practitioners.

Analysis: Risks and Opportunities for…

DApp trading volume fell by nearly 40% in the third quarter