On-chain data scan in March: Where did all these USDTs go in a single month with more than 1.3 billion additional issuances?

In the previous two articles, we analyzed the overall data situation in March from the macro perspective of big data on the chain, and then analyzed the on-chain data trends of the three exchange giants of Binance, Huobi, and Okex. Characteristics of data behavior. In addition, in March, there was an on-chain data behavior that caused industry attention and controversy, that is, USDT, to be precise, a crazy increase in ERC20 USDT, then what is the overall size of ERC20 USDT in March, these USDT Which exchanges mainly flow into it? At the end of the March summary, let us review the crazy March of USDT.

From a pure technical point of view, the first ERC20 USDT issuance in March occurred on the afternoon of March 5, when TEDA issued an additional 200 million ERC20 USDT. However, from a business perspective, this is actually a process in which TEDA has announced the exchange of USDT on other chains with the Binance Exchange to the ERC20 standard. The total amount at that time has not changed, so we do not take this "Additional issuance" is included in the overall issuance in March.

After the completion of the "additional issuance" of the switchover on March 5, immediately after 11:49 in the evening, TEDA has actually issued an additional 60 million ERC20 USDT, which kicked off the prelude in March. With the sharp decline in bitcoin on March 12 and the rapid increase in the over-the-counter USDT premium, TEDA's additional issuance of USDT this month is showing an accelerated acceleration.

From the process of TEDA's successive issuance of ERC20 USDT in March, we can see that the 3.12 plunge was not the only factor that contributed to TEDA's accelerated issuance. Less than 7 days before this, TEDA issued 4 additional totals of 240 million USDT, and even fell 3.12 It was issued one more time before the official opening. Throughout March, TEDA issued a total of 1.32 billion ERC20 USDT, from the initial 60 million USDT to the later 120 million USDT. The scale of single additional issuance is also expanding.

As of the end of March, the flow of these USDTs has been tracked in 5 layers in order to explore the trend of relevant USDTs during this time period. Since TEDA has also issued additional activities on March 30, relevant analysis will follow up on this additional issuance. Omissions on the cover.

What about the 200 million ERC20 USDT switch mentioned earlier? Whether it will be counted in the relevant analysis. Judging from the actual situation, the relevant USDT entered the Binance Exchange at one time after the additional issuance and before the substantial issuance this month, so it will not affect our analysis.

In the end, we made statistics on the main 2206 clear transfer operations of the receiving party for the exchange, with a total amount of 1024355775.63 USDT. 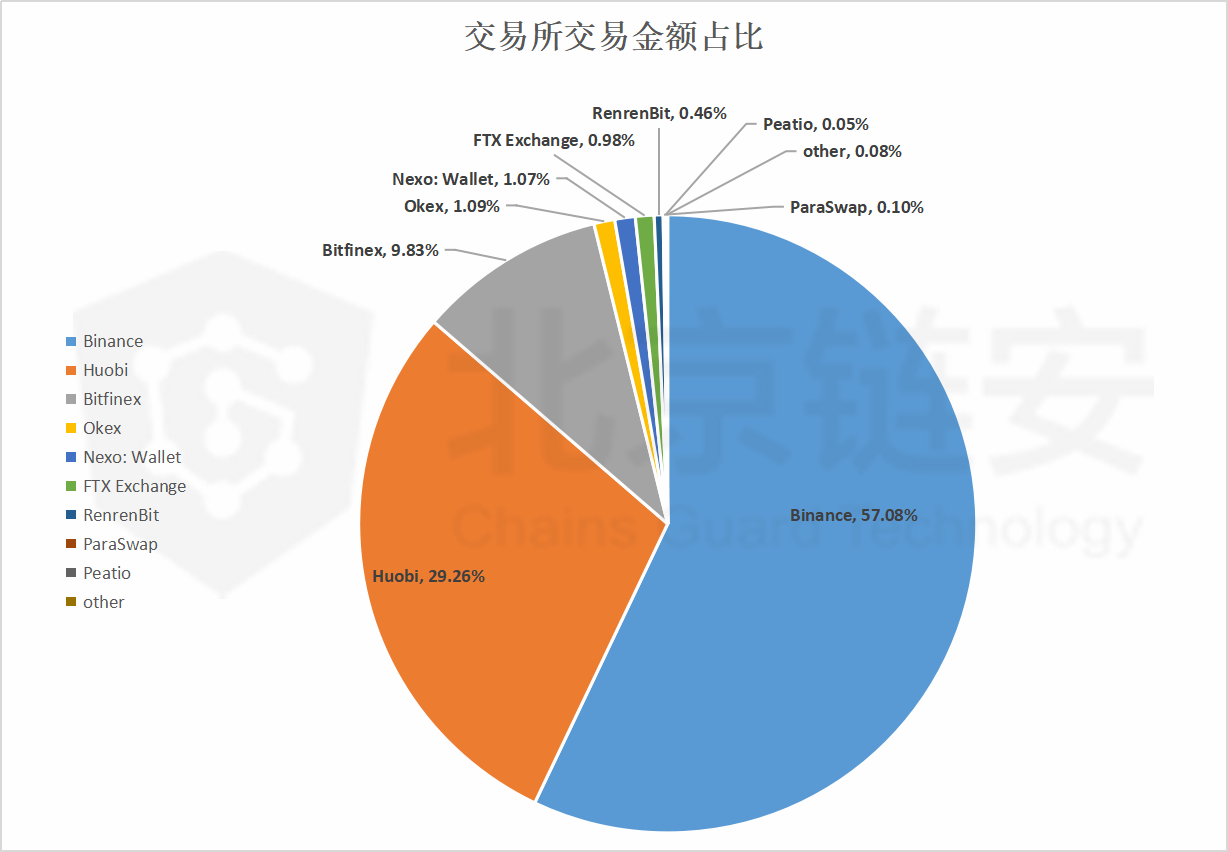 This additional USDT is mainly distributed to Binance, Huobi, and Bitfinex, an exchange affiliated with TEDA. The sum of Binance and Huobi accounted for 86%, which is also in line with our summary in March. In the second part of the analysis, Binance and Huobi are the most active forces in the trading market. From the point of view of Huobi, users in the developed OTC trading market have strong demand for USDT, and as a lively traded Binance, USDT is more needed to meet user needs. We have also found many large USDTs before Both the issuance and switching are related to Binance. It is after trading on these two major exchanges, especially after buying mainstream currencies such as Bitcoin and Ethereum, investors may withdraw coins to other exchanges or services to participate in such transactions as contract transactions, pledged loans, and financial management. Waiting for business.

For the large-scale additional issuance of ERC20 USDT in March, is it market demand? Or is it a collusion by multiple forces? In this regard, we do not evaluate, just present some data, I hope to help you judge and invest.

Disclaimer: The above data is analyzed by the Beijing Chainan ChainMap system based on the public information on the Bitcoin network chain. It is only for data research and analysis and does not guarantee absolute accuracy. We welcome all parties in the industry to testify and discuss together.

Analysis | The logic behind…