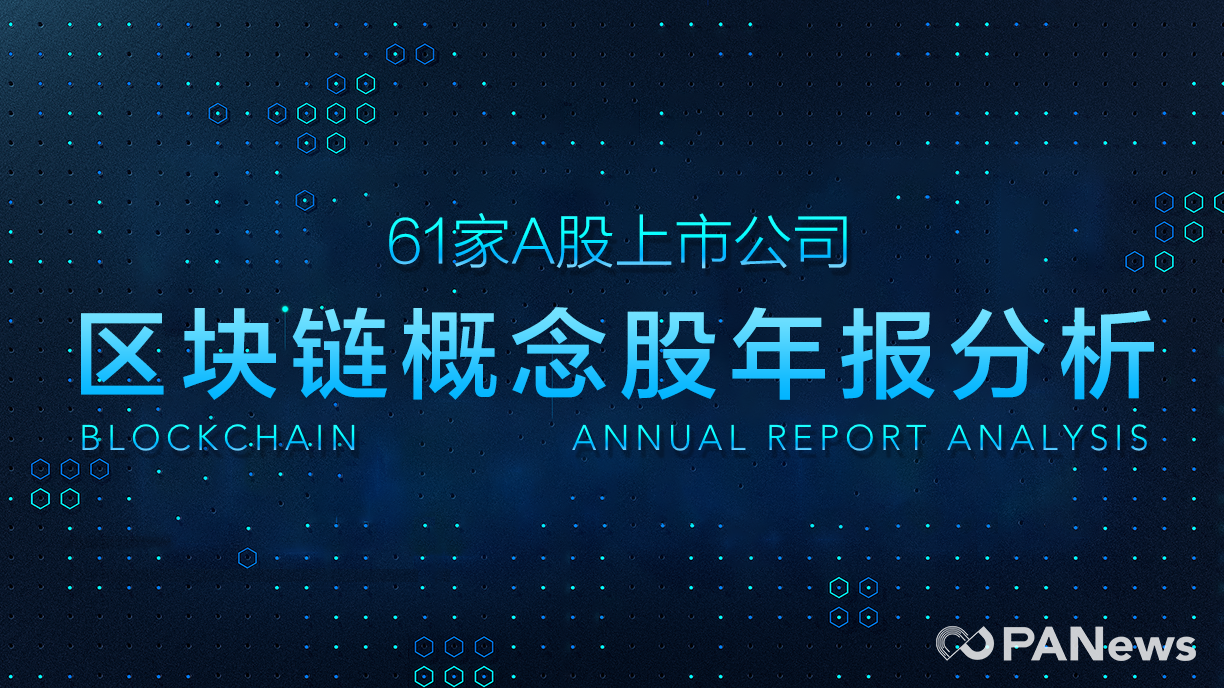 Although the media is the industry with the widest blockchain in addition to computer applications, the 50% blockchain concept media companies are losing money, and the most profitable companies are still light asset companies.

Judging from the total revenue and net profit performance of 61 A-share blockchain concept stocks, 46 companies achieved profitability in 2018, accounting for approximately 75.41%. The remaining 15 companies accounted for a loss of approximately 24.59%. In contrast, according to the published 2018 annual report of the Shanghai Stock Exchange and the Shenzhen Stock Exchange, about 90% and 85.48% of listed companies achieved profitability. The A-share blockchain concept stocks are significantly lower than the overall performance of listed companies. 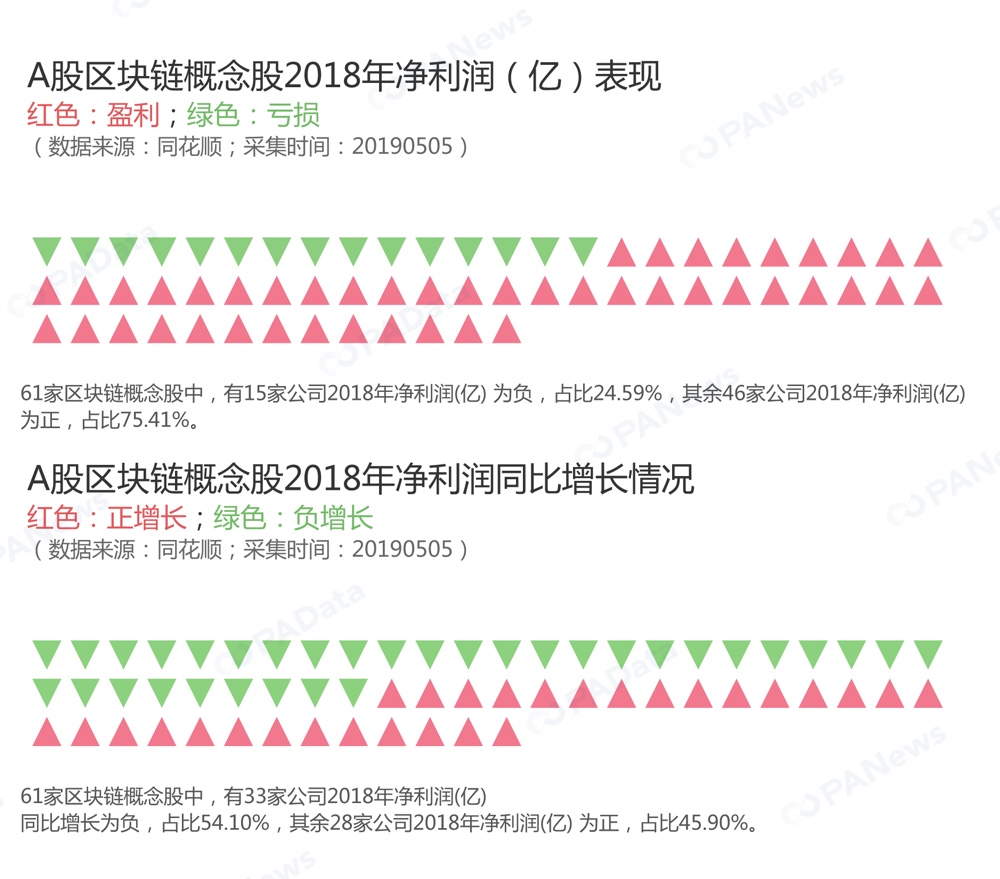 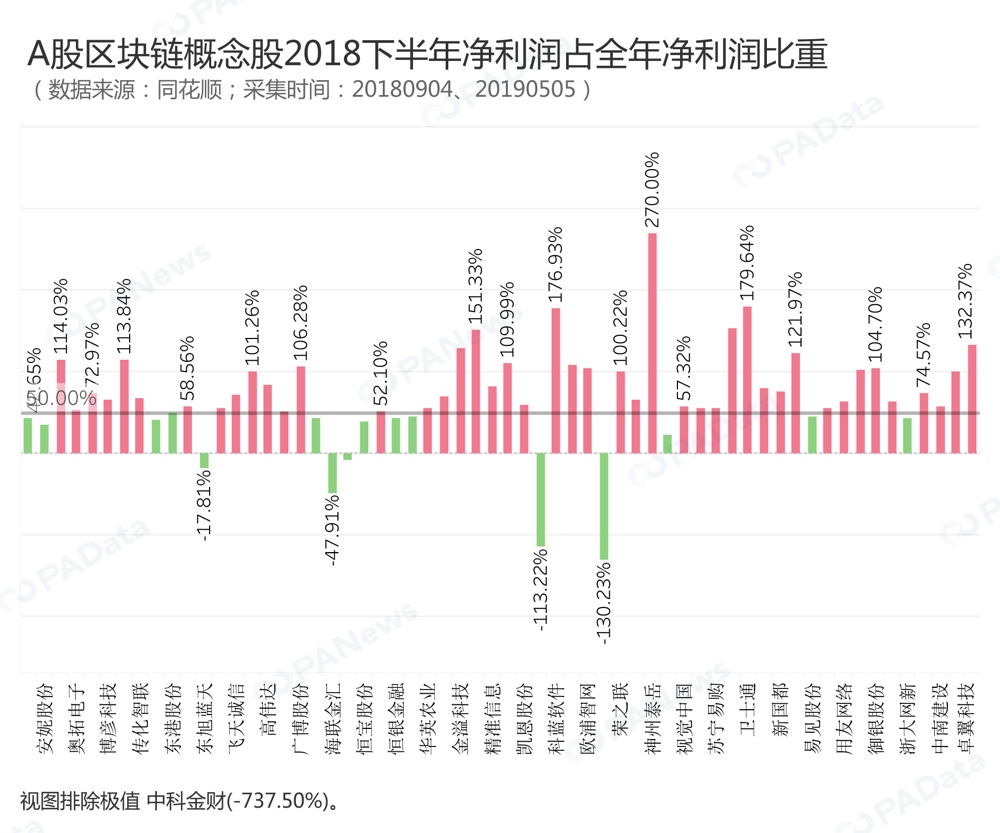 80% of computer application companies earn half of media companies' losses

In contrast, the media industry, although there are already eight companies in the blockchain chain, but four are losing money, and the profits of the four companies are relatively meager. 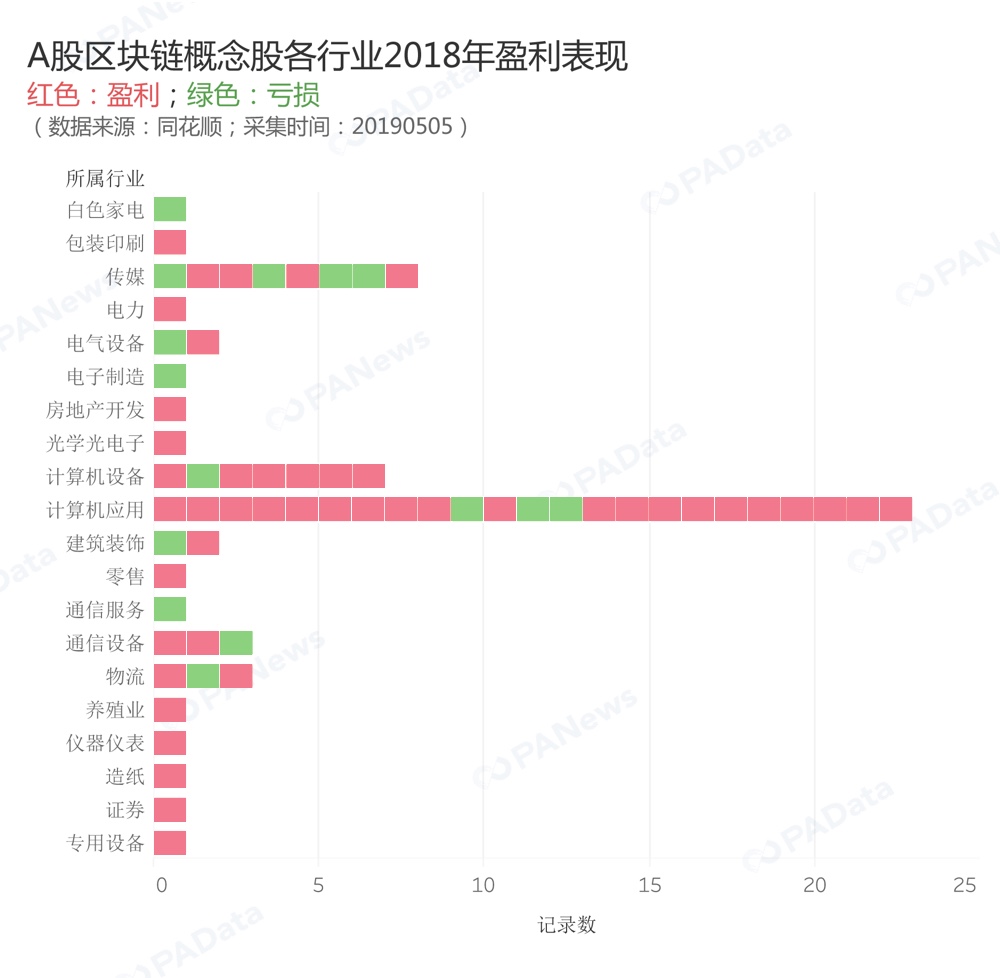 In addition, the power and logistics industry is also often mentioned as an industry scenario where blockchain technology can be applied. Although there are not many enterprise chain blockchain businesses in the two A-share listed companies, there are only one and three However, the industry's profitability is relatively leading among the concept stocks. One power industry company Dongxu Blue Sky achieved a profit of 1.12 billion in 18 years. The two companies in the logistics industry saw the shares and Chuanhua Zhilian achieved profitability in 18 years respectively. Billion and 8.2 billion. 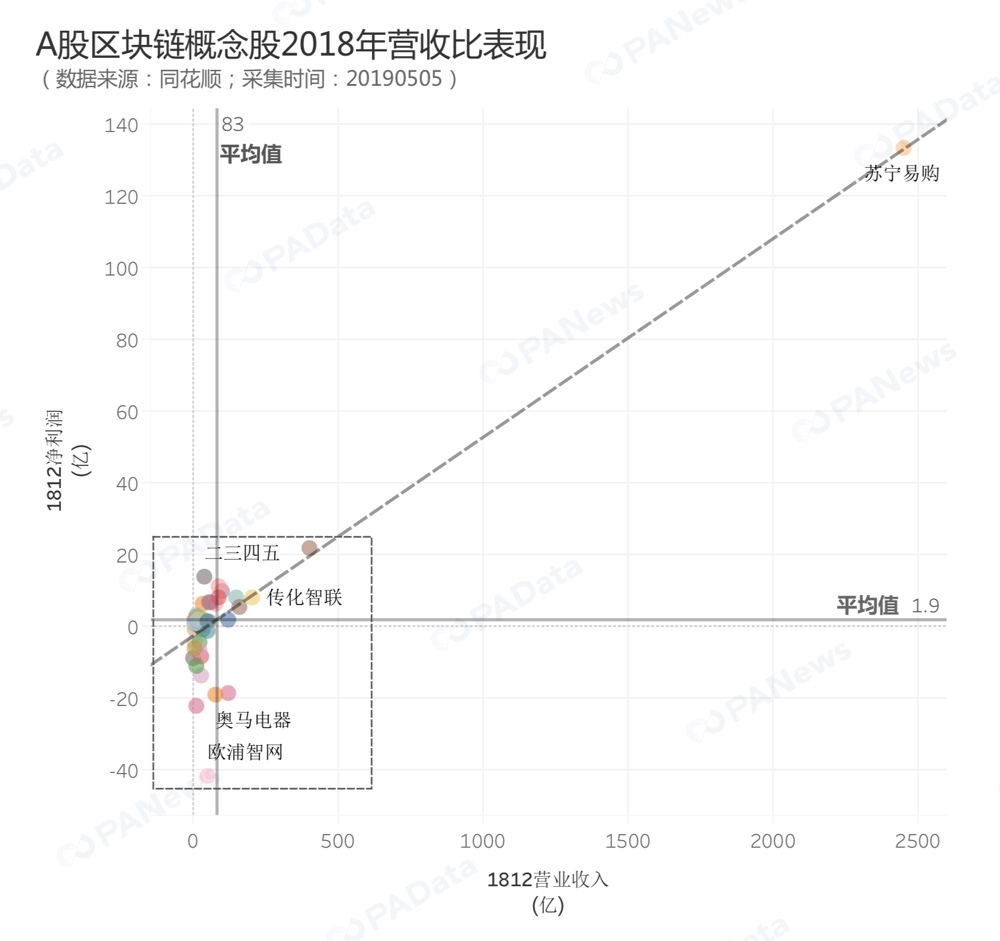 However, Suning Tesco, which has a large plate and large volume, is actually “heterogeneous” in the blockchain sector. Most blockchain concept stocks are mainly small-cap stocks. Therefore, a large number of enterprises were gathered in the lower left corner of the above figure. In order to more clearly observe the performance of these enterprises, PAData removed the extreme value of Suning Tesco and made a partial enlargement. 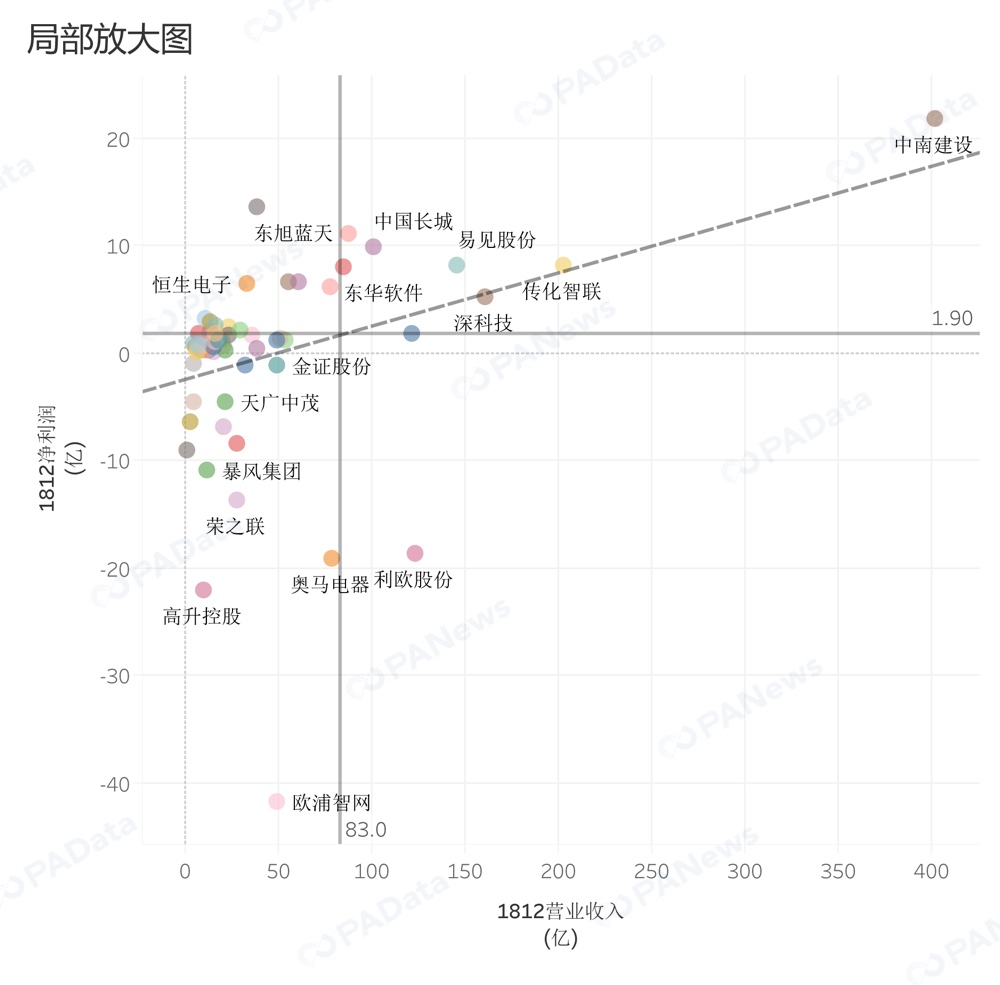 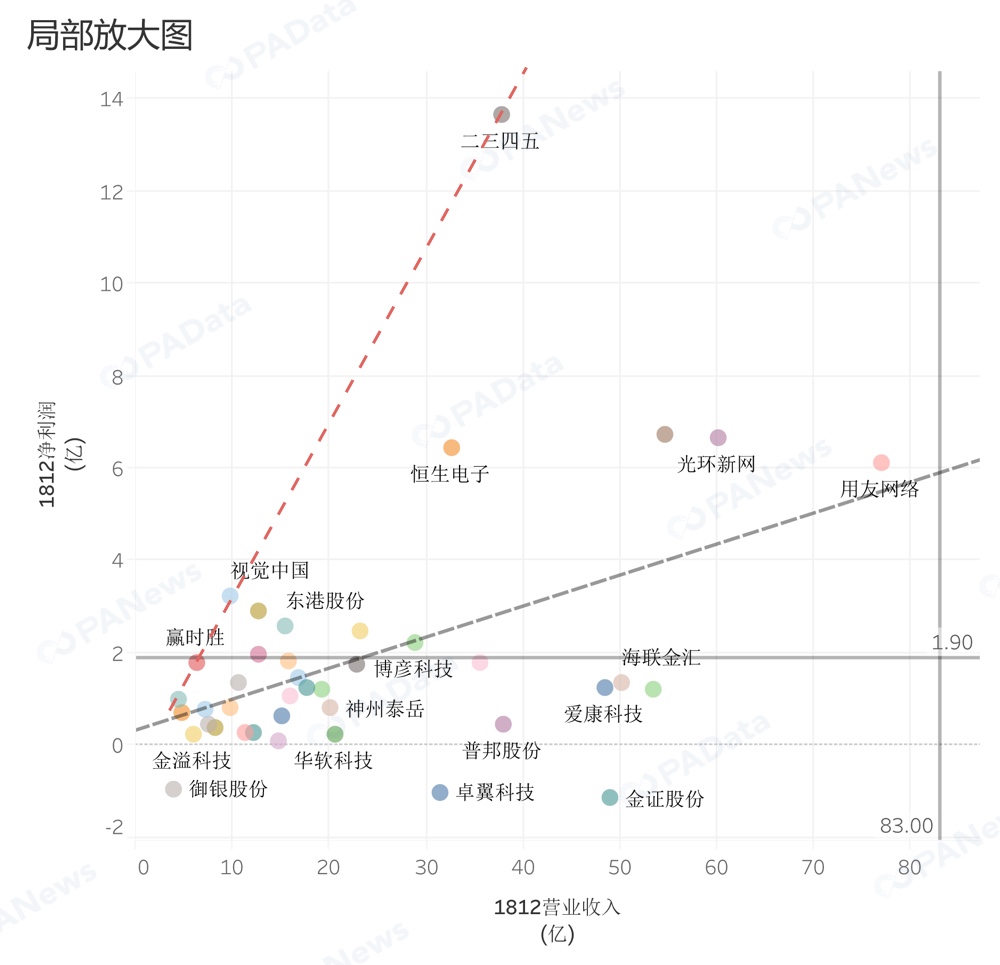 In the analysis of the mid-year report, PAData proposed that in terms of profitability and net profit performance, most of the current blockchain segments are lightweight companies based on computer applications and media industries. This view is still established in the annual report.

As can be seen from the above figure, although the traditional industries (real estate, logistics) represented by Zhongnan Construction, Chuanhua Zhilian and Yijian are strong, their cost is far higher than that of computer applications and media. Lightweight companies such as the industry, so they are dwarfed in terms of net profit.

At present, the highest net profit margin of the entire sector is still 2345, reaching 36.22%, becoming the most profitable and most efficient enterprise among the A-share blockchain concept stocks. Secondly, it was the visual China that was caught in the public opinion storm some time ago. The net profit rate reached 32.49%, and the third place in revenue capacity was win-win, and the net profit rate was 27.86%.

If you connect the three points of 2,345, Vision, and Win-Win in the partial enlargement, you can find that the slope of this line (the red dotted line in the above figure) is much larger than the entire plate (except Suning Tesco). Outside the line of correlation between operating income and net profit (ie, the grey dotted line in the figure, but not strictly statistically significant). This also explains from the side that the gap in corporate profitability in the entire A-share blockchain concept is very large.

Bloomberg: Cryptocurrency market may fall during Spring Festival due to slowing demand