"If bitcoin is to be used on a large scale in the future, it may be necessary to consider how to reduce carbon dioxide emissions." As one of the earliest cryptographic enthusiasts on the Internet to publicly mention bitcoin, Hal Finney has been born since the birth of bitcoin in 2009 , Began to pay attention to the latter's energy consumption and carbon emissions. However, since the development of the project, the problem is still unresolved, and it has become a point that Bitcoin is often criticized by the outside world. 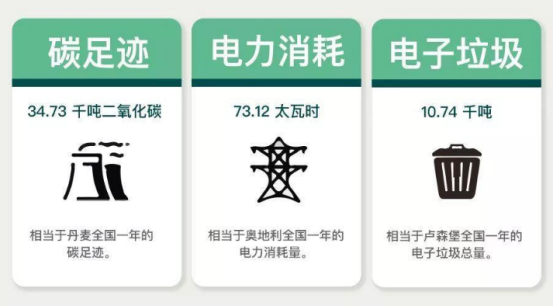 Image source: "Shocking: How much energy does Bitcoin consume"

Many people who are skeptical about the field use this to criticize Bitcoin, but once the blockchain of Bitcoin is started, it will not be easily stopped; unless the system crashes, can not continue to achieve profitability, or everyone is cruel to change mining Algorithm, otherwise the energy issue will always be around Bitcoin. However, compared with the data that looks scary, the issue of electricity consumption, whether its carbon dioxide emissions have a potential impact on the climate, is the focus of most experts' eager discussions.

From the current data, most of the mining equipment of the Bitcoin network is concentrated in China, and most of them rely on thermal power to maintain their work. Although industry players, including Bitcoin company CoinShares, have pointed out that about half of China ’s mining equipment is located in Sichuan Province, using cheap hydropower to mine bitcoin; but it is well known that the generation of electricity from renewable energy sources is often unstable. Problems, we still have to use thermal power to fill vacancies when necessary. For this reason, some people think that "the Bitcoin project almost entirely relies on coal to provide fuel for it."

The energy demand of Bitcoin miners is constant, and according to the current development trend, the demand will be gradually. But the truth is not as bad as we have seen or imagined; even in the worst case, when all the electricity used to mine Bitcoin is generated by burning coal, the emissions generated by running the network are far less than global carbon dioxide. 1% of emissions (data from: LongHash).

Past review: ( 72) How many times has Bitcoin been declared "dead"?
Upcoming next issue: (74 ) The Ponzi scheme scamming to make fortunes is actually the "evangelist" of Bitcoin's dark moments
The collection of story series you do n’t know about Bitcoin will be updated continuously, so stay tuned …

Stop it! The data tells…