From the perspective of installation and use, DC / EP operation is no different from the general APP, which is very in line with residents' usage habits and completely avoids the problem of higher use thresholds for cryptocurrencies such as Bitcoin. From the perspective of anonymity, the central bank DC / EP requires real-name registration. The use of DC / EP digital wallet requires the input of name and ID number. DC / EP requires real name registration, which is far from the anonymous transaction attribute of cryptocurrencies such as Bitcoin.

On the evening of April 14th, screenshots circulated in multiple communities showed that the Agricultural Bank of China is conducting internal tests on the central bank's digital currency DC / EP wallet. According to insiders of the Agricultural Bank of China, "People's Bank and the four major banks, as well as Ali and Tencent are the first stations of the central bank's digital currency internal testing. The pilot work will be carried out in Chengdu, Suzhou, Xiong'an and Shenzhen. Chengdu will start first The merchant of the application is Taikoo Li. "

Later, some media gave a test link, and provided DC / EP personal wallet operation guide and DC / EP wallet screenshot. The report said, "A person close to the central bank said the above test wallet is true, but only for customers in the white list."

If the news is true, this internal test will undoubtedly become a milestone in the history of the central bank's digital currency development.

01From "Waiting Out" to "Starting Internal Testing"

In fact, as early as August 10, 2019, Mu Changchun, the deputy director of the Central Bank's Payment and Settlement Department, said: "From 2014 to the present, the central bank's digital currency (DC / EP) research has been conducted for five years. "Call for it". "Then on September 6, he officially became the director of the Central Bank Digital Currency Research Institute.

The sudden outbreak in 2020 accelerated the pace of the central bank's digital currency rollout. At the beginning of March, the National Development and Reform Commission ’s research conference said: “The epidemic is a catalyst for the digital economy, and rapid, comprehensive, and accurate data collection and analysis is a prerequisite for efficient decision-making. In the post-epidemic period, the country may increase investment and procurement efforts. Central Bank figures The currency may be accelerated to become a special 'special fund' that can be controlled throughout the process. The central bank's digital currency may become an option for the 'new version of four trillion' directional stimulus, or it will be accelerated. "

A screenshot of the Agricultural Bank ’s internal test that was circulated on April 14th has confirmed various previous statements and conjectures.

Central bank digital currency has the characteristics of contactless payment. During the epidemic, many people worried that cash would become a carrier of virus transmission, and collective disinfection of cash even made people remember. In addition, compared to cash, in the "post-epidemic era", digital currency is more conducive to the government directly "spilling money from helicopters" and stimulating negative interest rates. In extraordinary times, the government's attitude towards adopting new technologies is more radical than before.

The basic knowledge of DC / EP will not be elaborated here. Readers can check Mu Changchun's speech and Yao Qian's series of papers. Here we mainly analyze what new information of the DC / EP is revealed in the screenshots circulated this time.

First of all, from the perspective of installation and use, DC / EP operation is no different from the general APP, which is very in line with residents' usage habits and completely avoids the problem of higher usage thresholds for cryptocurrencies such as Bitcoin. To use DC / EP, you only need to download the APP, complete the registration, set the password, and finally bind the bank account to pay. In addition, Mu Changchun once stated that DC / EP can be paid offline. "Dual offline payment" means that both the revenue and expenditure are offline and can also pay. In short, as long as the mobile phone has power, even if the communication network is broken, payment can be achieved. For example, in disaster-stricken areas where communication is paralyzed during an earthquake, underground supermarkets without a network, or airplanes, tools such as bank cards and third-party payment cannot be used in these scenarios, but DC / EP and cash payments are still available. 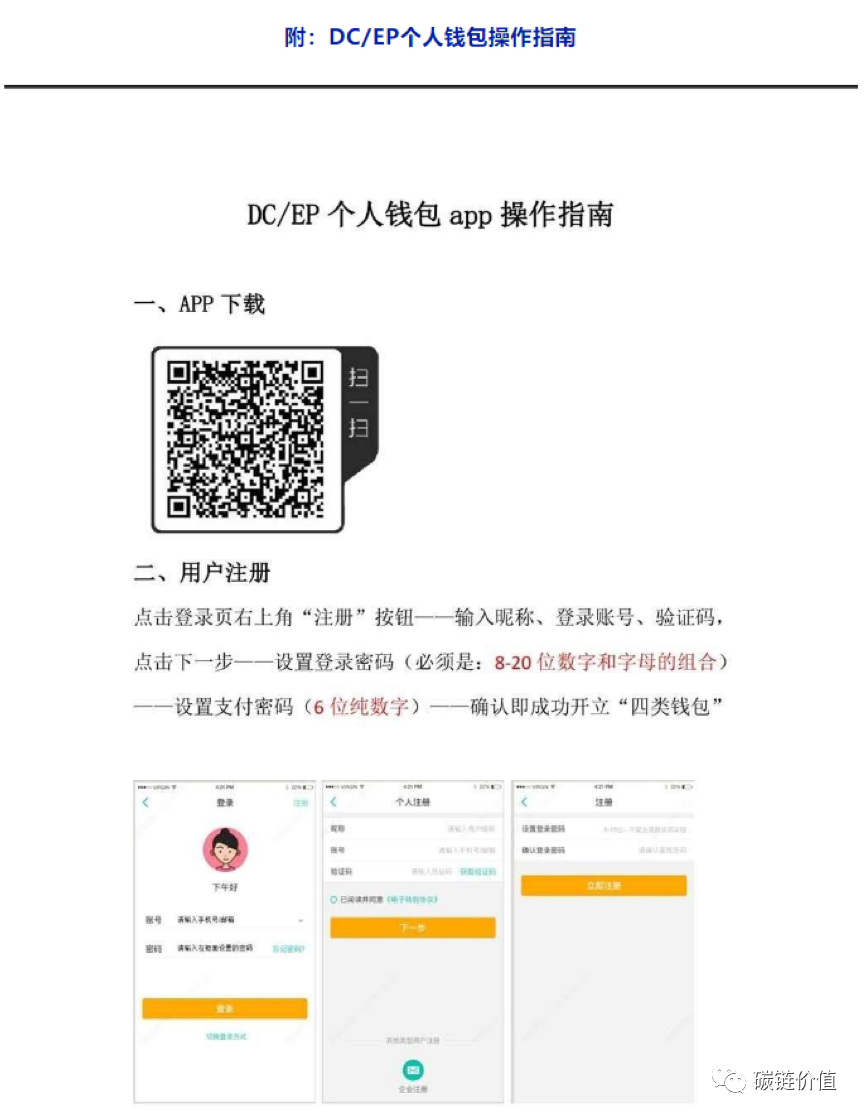 Secondly, from the perspective of payment process, there is no obvious difference between DC / EP and Alipay and other third-party tools, which is in line with the mobile payment habits that our residents already have. Users can realize the functions of scan code payment, remittance and payment collection by binding bank cards. Residents can exchange bank account assets into DC / EP through the APP, and use digital wallets for digital asset query and other operations. Wallets are divided into four categories, which should be similar to the security protection measures set by bank cards for different amounts and different usage scenarios. Earlier, Mu Changchun pointed out that DC / EP has controllable anonymity. He pointed out that Internet payment and bank card payment are closely tied to the traditional bank account system, which cannot meet the public's demand for anonymous consumption, and it is impossible to completely replace cash payment. As long as you don't commit crimes, you want to make some consumption that you don't want others to know, we still have to protect this privacy. The controllable anonymous central bank digital currency can solve these problems. It can not only maintain the properties and main value characteristics of cash notes, but also meet the requirements of portability and anonymity. The author speculates that this controllable anonymity function may be realized through the design of four types of wallets. For example, a small amount of anonymous payment is passed through a type of wallet, and the bound bank card is upgraded to a type 2 wallet. At this time, a larger amount of money can be operated.

Through the above interpretation of the central bank's DC / EP, readers will naturally ask: What is the difference between this and our daily use of Alipay and WeChat payment? After the introduction of central bank digital currency, will financial instruments like Alipay be replaced?

"Some people may ask, will DC / EP affect the status of Alipay and WeChat? Our answer is: No. Because Alipay and WeChat are also paid in RMB, in fact, they are paid in commercial bank deposit currency. After the introduction of the central bank's digital currency, it was only replaced with a digital renminbi, that is, the central bank's deposit currency. Although the payment tools have changed and the functions have been increased, the channels and scenarios have not changed. "

In December 2019, Wanxiang Blockchain Chief Economist published an article "Preliminary Analysis of the People's Bank of China Digital Currency / Electronic Payment" in the domestic journal "New Finance". The article first combed the core features of DC / EP, and then passed The comparative analysis of the third-party payment before and after "disconnected" concludes:

The author has specially compiled Mu Changchun's lecture notes, and based on the public information at that time, made a function comparison table between payment instruments such as banknotes, DE / CP, Alipay and WeChat. In addition, although Yu'ebao and Qiaotongtong belong to the category of monetary funds, they can also be used for daily payments, so they are still put in the table for comparison.

According to the previous public information, the central bank's DC / EP does not pay interest to users holding currency. It is still unknown whether the legal currency exchange DC / EP and DC / EP exchange legal fees will charge a fee (can be understood as a negative interest rate). Assuming that there is no handling fee, considering that there is a one-thousandth handling fee for Alipay balance withdrawal or WeChat change withdrawal, plus the forensic, anonymous and dual offline payment functions of DCEP, then what tools will the public choose to pay What? This is very worthy of observation. In fact, under the "currency revolution" brought about by emerging technologies, everyone is "crossing the river by touching stones".

However, considering that Ali and Tencent may be among the first list of institutions allowed to operate DCEP assets, the future functions of Alipay and WeChat may also change. We will wait and see.