The epidemic may unexpectedly become the biggest promoter of the country's digital currency. At present, all countries in the world are vigorously promoting their national digital currency projects.

China is no exception. In early April, the regulator pointed out that it is necessary to unswervingly advance the research and development of legal digital currency (DE / CP). Affected by this, digital currency related concept stocks rose collectively.

At the same time, the internal map of the DC / EP wallet APP of the Agricultural Bank of China, which has been circulating online recently, has also caused heated discussion.

It uses the whitelist system just like last year's ICBC DE / CP wallet. A bank insider said, "The major banks are increasing the number of whitelists on a large scale."

The much anticipated central bank digital currency DC / EP may soon fall to the ground.

On April 3, the People's Bank of China held a video conference call in Beijing, which was related to the national currency, gold, silver and security work in 2020.

The meeting summarized the achievements since 2019, including "stable development of legal digital currency."

"Strengthen the top-level design and unswervingly advance the research and development of legal digital currency." For the future planning, the meeting pointed out.

The outside world commented on this: "DC / EP is just around the corner."

The outflow of the DC / EP wallet test chart from Agricultural Bank of China further confirms this. The entrance to the wallet is a QR code. Scan this QR code, you can download the DC / EP wallet APP, users can complete a registration, you can open a four types of wallets.

The download page shows that the IOS version is the enterprise version of the APP. After installing it on the mobile phone, you must choose to trust the Agricultural Bank of China enterprise certificate in the system settings. 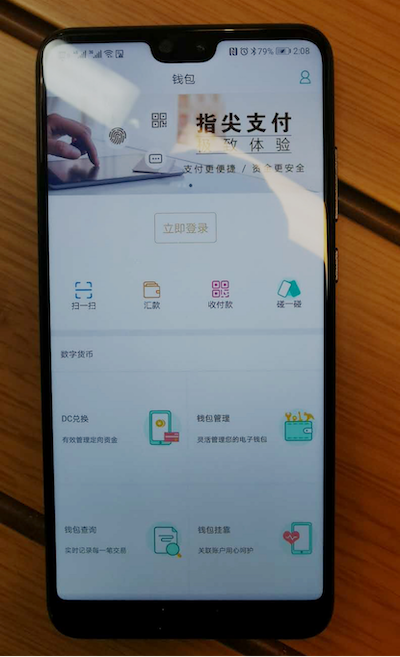 Open the DC / EP wallet, you can see four basic functions related to payment in the user interface, which are "sweep", "remittance", "receipt and payment" and "touch".

The first three functions are very common in Alipay and WeChat payment.

The fourth function is not uncommon. It refers to placing the mobile phone close to the NFC collection device to complete the payment. In 2018, UnionPay launched the cloud flash payment APP "touch-and-touch" payment, Huawei Pay also has this feature.

In addition to the basic payment functions, the DC / EP wallet also has a "digital currency" column with four functional options.

Among them, the DC exchange function means that the money in the bank card can be exchanged for digital currency and stored in the wallet.

At present, the DC / EP wallet of Agricultural Bank of China is still in the internal testing stage. Four outlets in Shenzhen, Xiong'an, Chengdu and Suzhou are open for testing. Only users in the white list can register for use.

In fact, this is not the first time information from the DC / EP wallet has flowed out. In October 2019, screenshots related to ICBC's digital currency wallet were released.

At that time, some media asked ICBC for verification, and the response was: the wallet is not yet open, only tested in Beijing, Guangzhou and other places.

"Each bank has recently increased the number of whitelists on a large scale. ABC has a leak incident, and we have also been required to do related confidential work to prevent the leak." A bank insider said to a blockchain.

There are various signs that DC / EP is really not far from us.

The stock market with a keen sense of smell naturally moves.

In the previous week, the A-share digital currency sector has ushered in a wave of ups and downs, and related concept stocks have risen collectively.

The digital currency sector is becoming a hot spot for A shares.

Under the heat, some companies are following the hype, which has caused regulatory attention.

For example, on April 8, Zhongzhuang Construction Company and its chairman, president and others were criticized by the Shenzhen Stock Exchange.

Capital State reported that the cause of the incident was November 1, 2019. The company claimed in a platform response to investor consultations that “the central bank's digital currency working group met with the head of the Zhongzhuang Construction Blockchain segment in Shanghai” He said that the two parties "have conducted in-depth communication on the research and development, access and testing of digital currency in the field of architectural decoration."

This reply was rumored by the central bank on the same day.

The accelerated landing of DCEP will not only stimulate the stock market, but also the currency circle.

A currency circle player said that DC / EP will accelerate ordinary people's understanding of the digital currency industry and allow more people to enter the market.

However, more people hold the opposite view.

"If DC / EP triggers a new round of speculation in the currency circle, then obviously, a new round of blows will come soon." Xiao Le told a blockchain.

At the beginning of April, the official website of Mutual Gold Association once again issued the "Reminders on the Risks of Participating in Speculation of Overseas Virtual Currency Trading Platforms".

The epidemic is becoming a powerful promoter of the accelerated landing of DC / EP.

This is because, first of all, the national digital currency can solve the problem of currency liquidity during the epidemic.

"An interesting assumption is that if the United States issued digital currency before the epidemic, it may be possible to avoid the collapse of US stocks caused by this liquidity crisis." Zhang Beilong, deputy general manager of FunChain Technology Beijing Branch, told a blockchain.

This is because the current electronic payment in the United States is not perfect, and people mainly use credit cards and cash. At the beginning of the outbreak, because of fears that the bank would close in the future, a large number of Americans went to the bank to collect cash.

Zhang Beilong said that in this way, many dollars "from M1 to M0."

M0 refers to cash in circulation, that is, cash circulating outside the banking system; M1 can be understood as M0 plus demand deposits of commercial banks.

And Tsinghua professor He Ping also recently stated in a blockchain online dialogue column "One Talk" that the epidemic may be an opportunity for DC / EP.

This is because, affected by the epidemic, all countries will have a lack of liquidity, and there is an external demand for RMB.

At this time, if China can extend its generous hand to provide loans, subsidies or exports to countries around the world, it can promote the internationalization of the renminbi.

In this process, DC / EP can undoubtedly play an important role.

Secondly, the national digital currency can also prevent epidemics-if cash is used, it may further spread the virus.

Therefore, the Bank of England, the Bank of Canada, and the Bank of China have all adopted sterilization and quarantine measures for banknotes; while countries such as India, the Philippines, and Georgia are developing in the direction of contactless payments.

After the epidemic is over, DE / CP will also be of great use.

On March 3, at a meeting of the National Development and Reform Commission, more than a dozen experts and scholars concluded that after the epidemic, the country may increase investment and procurement, and the central bank digital currency may accelerate the launch, becoming a special controllable process. specific fund".

China is at the forefront of financial technology.

If it can be successfully launched in 2020, DC / EP will become the world's first digital currency with legal currency properties.

Now, one of the biggest concerns of blockchain practitioners is how DC / EP will use blockchain technology.

The answer will be announced soon.

* Some interviewees in this article are pseudonyms.