On the evening of April 9, Jia Nan Yunzhi, who landed on Nasdaq less than half a year, issued his first "transcript."

Judging from the performance of last year, Kanan Yunzhi's revenue not only fell back to the 2017 level, but the net loss was a record high.

Although Jianan Yunzhi explained in the financial report, the main reason for the company's full-year revenue decline in 2019 is the decline in the price of mining machines caused by the decline in Bitcoin prices.

But in fact, the impact of currency price fluctuations is not the root cause of its loss. The larger bottleneck currently faced by Jianan Yunzhi is that competitors such as the Shenma mining machine will come up later, and because the 7nm chip mining machine has been unable to mass produce, 8nm chips With insufficient supply of production capacity, Jianan Yunzhi is missing the best time for "mining shift".

In the 2019 prospectus, Jianan Yunzhi's performance once showed signs of recovery. 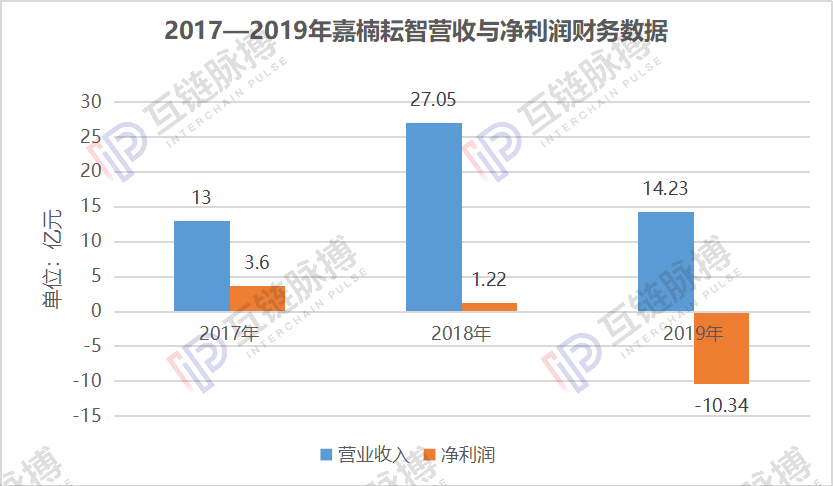 Why did Jianan Yunzhi's "performance change face" so quickly after going public?

In the financial report, Jianan Yunzhi gave two explanations: One is the substantial increase in revenue costs in the fourth quarter of 2019. The increase was mainly due to a write-down of 729 million yuan in inventories and advances. This is due to the fact that the price of bitcoin has fallen sharply throughout the issuance of financial statements, leading to a decline in the demand for mining machines and the price of mining machines.

This means that in the fourth quarter of last year, Jianan Yunzhi cleaned up a large number of products at low prices. In fact, since the beginning of 2019, Jianan Yunzhi has been destocking. According to Wu said that the blockchain previously reported that the inventory of Jianan Yunzhi at the end of 2018 was 585 million yuan, and the inventory at the end of 2019 had dropped to 196 million yuan. Analysts believe that a large amount of dumping inventory is one of the main reasons for its revenue level decline.

In addition, in terms of supplier prepayments, upstream chip suppliers' fabs generally give priority to customers who pay in advance. After the chip supplier of Jianan Yunzhi changed in the fourth quarter of last year, in order to speed up greater computing power. For mass production of machines, Jianan Yunzhi needs to pay more advances to the new upstream fab, which further increases quarterly operating costs.

In addition to the increase in operating costs, another explanation given by Jianan Yunzhi is that in 2019, Jianan Yunzhi spent an additional RMB 247 million in equity incentive fees.

However, the inter-chain pulse noticed that in addition to the above two internal factors, in terms of external competition, the challenge that Jianan Yunzhi had to face was that in 2019, the rapid rise of Bit Weishen Ma mining machine robbed many mines. Market share.

The sales director of Shenma Mining Machine Zhang Wencheng revealed at the event hosted by the Yinyin mining pool earlier this year that the company's flagship product WhatsMiner M20 series sold about 600,000 units in 2019. Computing power.

In addition, according to Wu said that the blockchain reported at the end of last year, in 2019 Jianan Yunzhi's revenue was only a quarter of the Shenma mining machine, and about one tenth of Bitmain. If the reported revenue data is true, Jianan Yunzhi ranks second among the world's three largest mining machine giants and will probably be shaken.

However, the greater challenge facing Jianan Yunzhi is that due to the delay in launching its 7nm chip mining machine and the insufficient supply of 8nm chip production capacity, Jianan Yunzhi may have missed the best time for "mining shift".

Not only that, Jianan Yunzhi's A10 series products have returned to the 16nm process chip. According to its prospectus, its latest product, the A11 series, does not use 7nm chips, but uses 8nm chips that are suspected of Samsung.

However, due to the trade war between Japan and South Korea since the second half of last year, the photoresist has been embargoed by Japan, and Samsung's chip shipments are very limited, or it will affect its large-scale mining machine shipments. At least for now, the A11 series miners on Avalon's official website are no longer in stock.

More importantly, Bitmain has almost monopolized 7nm mining machine chip production capacity. According to industry sources, TSMC and Bitmain have signed a secret betting agreement on 7nm chips, and their 7nm chip production capacity is no longer available to other mining machine manufacturers. And this is the main reason for the chip supplier changes in the second half of last year.

For the 5nm process chip that Jianan Yunzhi has high hopes for, TSMC is currently taped out, but since the four iphone 12 series phones that Apple will launch in the second half of this year also use the TSMC 5nm process, it has already covered TSMC three Two-thirds of 5nm production capacity. In addition, some professionals said that the chip taping process is relatively long, and it may take 12 months for the chip to reach mass production. Therefore, it may be difficult for TSMC to provide sufficient 5nm chip production capacity in a short period of time.

But it is worth noting that at the moment when Bitcoin is halving for the third time and the Sichuan flood season is coming, the entire mining industry is also entering an inflection point. The era of depleted mining machines is coming.

For Jianan Yunzhi, if the chip technology research and development capabilities and large computing power mining machine shipment capacity can not keep up with competitors, it may miss this round of "mining shift" the best time.

Chinese cryptocurrency, from the center…

Babbitt Column | Where will…

Survey: Asia will become the world's leading digital currency company base in the next 10 years