With the rapid development of cryptocurrency, government agencies and investors around the world are paying more attention to central bank digital currency (CBDC). It has to be said that CBDC has become one of the most promising applications of distributed ledger technology (DLT). .

In order to assess the applicability of blockchains in future payment systems, many CBDC projects have been launched in countries around the world. Financial Market Infrastructure (FMI) is an important institution responsible for providing clearing, settlement and recording of financial transactions, as well as a trusted third party between financial institutions, and uses centralized distributed ledger records and tracking transactions.

FMI operators have shown a keen interest in technologies that improve FMI efficiency, and three CBDC DLT exploratory projects have been launched to date. For such future payment systems, people usually assume some benefits.

It is speculated that by increasing settlement automation, the back office costs of the financial sector can be reduced, and there will be further advantages in terms of information reliability, traceability, and shorter settlement time. However, so far, the CBDC DLT project has shown that the technology is not mature enough to achieve these improvements.

The importance of FMI to financial stability is self-evident, balancing many of the major risks. These risks include governance and legal risks, credit and liquidity risks, settlement risks, and operational risks.

While maintaining the benefits of DLT technology, FMI must also achieve appropriate transparency and privacy for system participants, which leads to a series of trade-offs, especially between system privacy, flexibility, and scalability. .

The CBDC DLT project deserves attention and research because it brings us closer to determining the core value proposition of DLT. With the further development of the central bank's digital currency, we will continue to update this basic report.

The term "cryptocurrency" has similarities to the existing currency issued by the central bank, and vice versa raises another question as to whether cryptocurrency should be treated as currency.

The world's oldest Swedish central bank has said: "Currency theory and how to create an effective monetary system can be understood through the specific problems that society has tried to solve in history."

There are different definitions of money, and modern definitions have evolved to address many of the pain points involved in previous barter trading systems.

Linking money to the value of potential goods, which are usually metals, metalism is named after it.

A core point of metalism is that limited metal supply and rising mining costs have led to natural inflation limits. Bitcoin found inspiration from metalism and incorporated similar digital restrictions into the total supply of Bitcoin.

Charterism is another theory that defines money. According to Chartalism, the value of money comes from its status as a legal currency issued by a country. Therefore, Chartalism gives the state an indirect responsibility to maintain the normal functioning of the monetary system.

On the basis of charterism, functionalism dominates the interpretation of modern currency. According to functionalism, money must meet three functional criteria in order to be considered a currency. That is, means of payment, value scale, and storage means.

The payment method means that the goods can be actually paid by the money to the seller in exchange for the goods, thereby avoiding the use of the goods or services to repay the seller.

As a unit of account, money must be a recognized measure of value for different goods and services.

As a means of storing value, money should have price stability, and people's decisions about consumption or non-consumption should not be affected by fluctuations in monetary value.

The central bank is usually responsible for ensuring that the currency can perform these three core functions. The central bank's often set inflation target is one of the examples, the purpose of which is to maintain the currency's preservation function. At present, the world's major central banks generally believe that cryptocurrency should not be regarded as currency, because most cryptocurrencies are neither linked to the value of tradable goods nor issued by the state.

In addition, cryptocurrencies are difficult to meet some standards related to functionalism, such as the need to easily determine the value of money, the currency is widely accepted in payments, the currency must be durable, and exhibit price stability.

Of course, this does not mean that the cryptocurrency cannot be issued by the state (actually some countries have already issued it), nor does it mean that it cannot be linked to the physical value.

However, in order to treat encryption technology as a retail payment instrument and adopt it on a large scale, it must meet functionalist standards. The road to price stability, adequate price transparency, and widespread acceptance among buyers and sellers is long and difficult.

In order to establish a retail payment system, CBDC has entered the field of vision as a substitute for cryptocurrencies such as Bitcoin. The proposed retail CBDC not only has the potential to meet functionalist standards, but also addresses some of the problems in the modern economy, especially the over-reliance on privately-provided retail payment infrastructure.

The CBDC-driven Retail Payment System (RPS) has been proposed as a solution to many problems. Some of these problems are related to the cost of using cash, and some are related to cash shortages. It should be noted that CBDC RPS can be designed without DLT, and DLT is just one of the possible underlying database infrastructures for such systems.

Today, some countries have considered CBDC RPS as a way to reduce cash use, with the aim of reducing the financial and environmental costs associated with handling cash and avoiding the black economy triggered by cash.

According to the data, the use of cash in countries such as Sweden has fallen sharply in recent years. In Sweden, cash currently accounts for only 1% of GDP, while Europe's average is 10%.

According to the survey, more than half of Swedish retailers said they will stop accepting cash by 2025 at the latest. In response, the Bank of Sweden said that a sharp drop in cash usage and cash supply could make it difficult for the public to obtain risk-free funds from the central bank and increase the integration of financial infrastructure between private digital retail payment systems.

These may lead to a less efficient and more fragile payment market and lead to a decline in trust in the monetary payment system.

The CBDC RPS is considered to be the solution to the above two major problems. Here, we take the example of digital dollars.

A "digital dollar" platform allows the public to hold digital dollars issued and guaranteed by the central bank. The platform will interact with external systems such as users (through the Internet, bank cards, the Internet of Things, etc.), settlement systems, internal support systems, ATM companies, payment service providers. 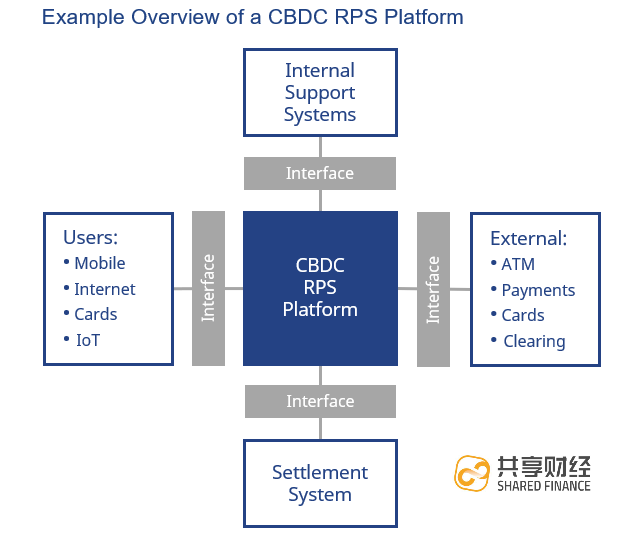 The cost associated with this “digital dollar” may be very small compared to the processing cost of the cash dollar, and the digital dollar can provide traceability to the central bank to limit black market transactions.

The digital dollar will also provide the public with a guaranteed RPS that, unlike most existing RPSs, is not privately operated.

There are two main methods for designing CBDC RPS. One is account-based (held in the central bank's account) and the other is value-based (stored in an application or bank card). Both require an underlying register to track transactions and ownership, which means usage is traceable. Here, DLT is considered a possible choice.

It is expected that CBDC RPS will attract more attention in the future, but still need to consider whether the digital dollar should carry interest when designing RPS? Should it be based on accounts or based on value?

Digital dollars can make bank runs easier, but is it desirable? Strong demand for digital dollars (especially interest-bearing US dollars) may also deplete the funds of commercial banks, resulting in a decline in credit capacity. These will bring a new set of potential risks to the financial system and must be carefully evaluated.

Currently, value-based, interest-free dollars appear to be the most likely proof-of-concept candidate currency. In the words of Deutsche Bank's 2018 report, it is still difficult to find a compelling reason for consumers to voluntarily switch to encrypted euros.

The Wholesale Payment System (WPS) has a broader and faster prototyping than the CBDC RPS, probably because more cost savings can be achieved with the CBDC WPS.

In addition, the interests of private financial institutions and central banks are generally consistent during the development of CBDC WPS.

The Wholesale Payment System is a settlement system that can handle large amounts of real-time payments between banks and across countries, as well as related clearing. It is managed by the central bank and integrates various globally recognized standards.

CBDC WPS considers how to use digital currency to improve the efficiency of WPS. Here, we use the following simplified example to summarize.

In this proposed system, the bank holds a special deposit account at the central bank. The bank can deposit funds from the bank's RTGS account into the deposit account, and the deposit balance is reflected in the digital currency wallet on the approved blockchain system.

Such a system can be designed around the DLT, and the details of the system depend on the digital bookkeeping technology chosen. The most commonly considered options are Corda from R3, Fabric from Hyperledger, and Quorum from JP Morgan, which will be covered in a later section.

So far, several WPS proof-of-concepts have been developed, and after testing it has been proven that DLT can perform transactions at a rate that matches the capacity of existing RTGS, and is final.

The CBDC WPS system is usually at the expense of limited privacy or system resiliency, which needs to be further optimized to achieve a more efficient trade-off between these aspects.

Of course, we need to point out that a mature CBDC WPS should include liquidity management and credit extension. The concept of both functions already exists, and we will not go into detail here.

As more and more participants in the financial market consider introducing DLT-based systems, the complexity of interoperability and the potential of new business models are also rising.

(This article is a compilation of financial original compilation, please indicate the source and author)