The blockchain reshapes the cross-border payment business, absorbing the world's wealth flows to the United States through bank tokens linked to the US dollar, helping the US to continue to stabilize US dollar hegemony.

In fact, not only Bank of America, but since last year, a large number of overseas banks have entered the market. In addition to patent applications, they also issue bonds, settlement currency, and letters of credit based on blockchain.

The Odaily Planet Daily conducted an inventory of the blockchain layouts of eight major overseas banks, including Bank of America, HSBC, and JP Morgan Chase, and found that the eight major banks had a total of 84 applications on the blockchain.

Previously, finance was once considered to be the best application scenario for blockchain. It is believed that the blockchain will revolutionize the life of financial institutions and may impact the existing business functions of traditional banks.

Obviously, the blockchain has become the high ground for the eight major overseas banks to compete. This implies that centralized financial institutions are aware of the risk of stopping. Before the change, centralized banks are adapting to the frontier trends and self-revolving.

Overseas banks flock to the blockchain,

According to the World Bank's market capitalization rankings made by Relbanks in 2018, the Odaily Planet Daily selected eight overseas banks that are widely explored in the blockchain business and ranked among the best in the world in terms of market capitalization, namely JPMorgan Chase and Bank of America. , Wells Fargo Group, HSBC Holdings, Citigroup, Mitsubishi UFJ Financial Group, Goldman Sachs Group, UBS Group.

Among the top eight overseas banks, JP Morgan Chase was the first overseas bank involved in the blockchain field. It applied for bitcoin-related patents to the US Patent Office as early as 2013.

After the inventory, the Odaily Planet Daily found that the eight major overseas banks began to expand the experiment of blockchain application direction around 2018.

In terms of the exploration direction of the blockchain of the integrated bank, the trade finance field is an application treasure that the banks are eager to eat, mainly used in the three aspects of letter of credit, trade financing and cross-border payment.

According to rough statistics, among the 84 blockchain businesses of the eight major banks, 33 are related to trade finance and payment, accounting for 38%.

In addition, JPMorgan Chase, Citibank, Mitsubishi Group, and Goldman Sachs have all tried to use the form of issuing digital currency to explore the direction of payment, in order to transform the pain of centralized finance in the payment settlement field.

When banks experimented with different applications of blockchains, HSBC almost rushed to trade finance. This is also determined by the history of HSBC.

From the initial stage, trade financing is a major feature of HSBC.

A century ago, HSBC was founded in Hong Kong. The real name of HSBC is Hong Kong and Shanghai Banking Corporation. The term "HSBC" is also given by Hong Kong people. On the one hand, it is a symbol of "rich remittances"; on the other hand, people hope that the international exchange business of the bank can flourish.

In the early days, HSBC's main business was to provide trade finance. The bank had funded frequent cross-border business activities between China and Europe.

In the early 20th century, HSBC provided financial services to Asian governments and was an important bank for the UK government to open accounts in China, Japan and Singapore.

HSBC has always been the main force in the trade finance business. According to statistics, in 2017, HSBC's revenue from trade finance reached US$2.52 billion, making it one of the largest banks in the global trade finance sector.

It is reported that in trade finance, banks provide services such as letters of credit, financing mechanisms, and financial management of customers. They use paper documents for a long time.

According to the Odaily Planet Daily, there are currently 15 blockchain applications open to HSBC, 13 of which are in trade finance. 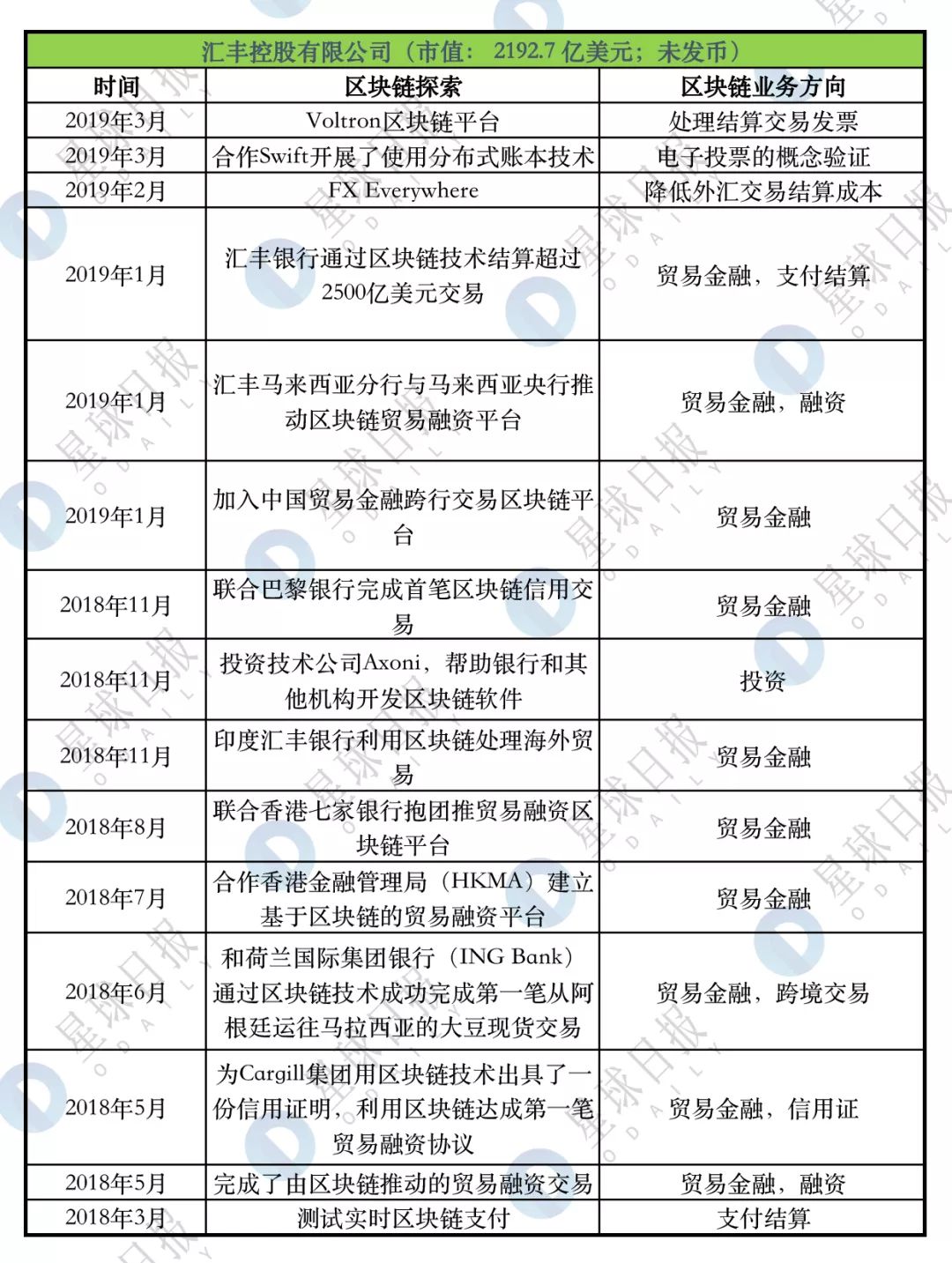 Compared with other banks that started blockchain applications between 2015 and 2017, although HSBC started a little later, the promotion is not small. According to statistics, HSBC invested about US$200 million in blockchain technology in 2017 and is expected to reach US$400 million in 2019.

In May 2018, HSBC opened the first letter of credit for a soybean trade in the agricultural giant Cargill through blockchain technology. The corda platform of R3 used by HSBC was officially put into commercial use at this time. .

With the blockchain, trade finance is paperless, and transaction time is reduced to hours. HSBC believes that the use of blockchain technology will reduce the risk of letters of credit and other fraud, helping to improve bank efficiency and reduce trade financing errors.

The test of the head army HSBC has aroused widespread concern in the industry. Some people think that HSBC is making a life of its own. The Financial Times said that this would have a huge impact on the $9 trillion trade finance industry.

In response, HSBC acknowledged that it said that in the next few years, the blockchain will significantly reduce traditional trade finance activities.

Vivek Ramachandran, then head of HSBC's trade finance business, also said that the technology (blockchain + trade finance) is ready for commercial application, and the next step is to encourage more participants to join the agreement.

Subdividing some, cross-border payment is a blue ocean in the field of trade finance.

There is no doubt that cross-border payment is a big cake with a huge market space.

The report found that 92% of the $1 trillion cross-border payment market is B2B payments, while 90% of B2B payments are made through banks. At present, the SWIFT channel is used uniformly among banks, and the cost is not small.

At the same time, cross-border transfers also require a lot of manual reconciliation, and cross-border payments through SWIFT often take between 3 and 5 days.

The high cost and long settlement time are the most painful pain points of current cross-border payments.

For banks, blockchain technology is likely to help solve the cost of cross-border payments, subverting the current moat set by SWIFT.

The core role of blockchain technology is to reduce costs and increase efficiency.

The McKinsey report "Blockchain: The Subversion of the Banking Game Rules" states that the application of blockchain technology in B2B cross-border payment and settlement services will reduce the cost per transaction from approximately $26 to $15, of which approximately 75% is the payment network maintenance fee for the intermediary bank, 25% is the compliance, error investigation, and foreign exchange exchange costs.

Everyone wants to carve up this tempting cheese.

The eight major banks in the Odaily Planet Daily have tried to apply blockchains in their payment business. To this end, JPMorgan Chase, Citibank, Mitsubishi Group, and Goldman Sachs have also tried “currency”.

On the one hand, it is a fierce market competition atmosphere, on the other hand, the more serious reality is that cross-border payment business is not good.

In 2019, after JP Morgan Chase launched a large-scale JPMcoin for payment settlement, Citigroup announced that it would suspend its citicoin plan and abandon cross-border payments to become more adept in the field of trade finance.

Citi’s move was explained indirectly to the outside world, but it was tried, but after all, there was no cake for cross-border payment. The traditional pattern set by SWIFT was difficult to shake. 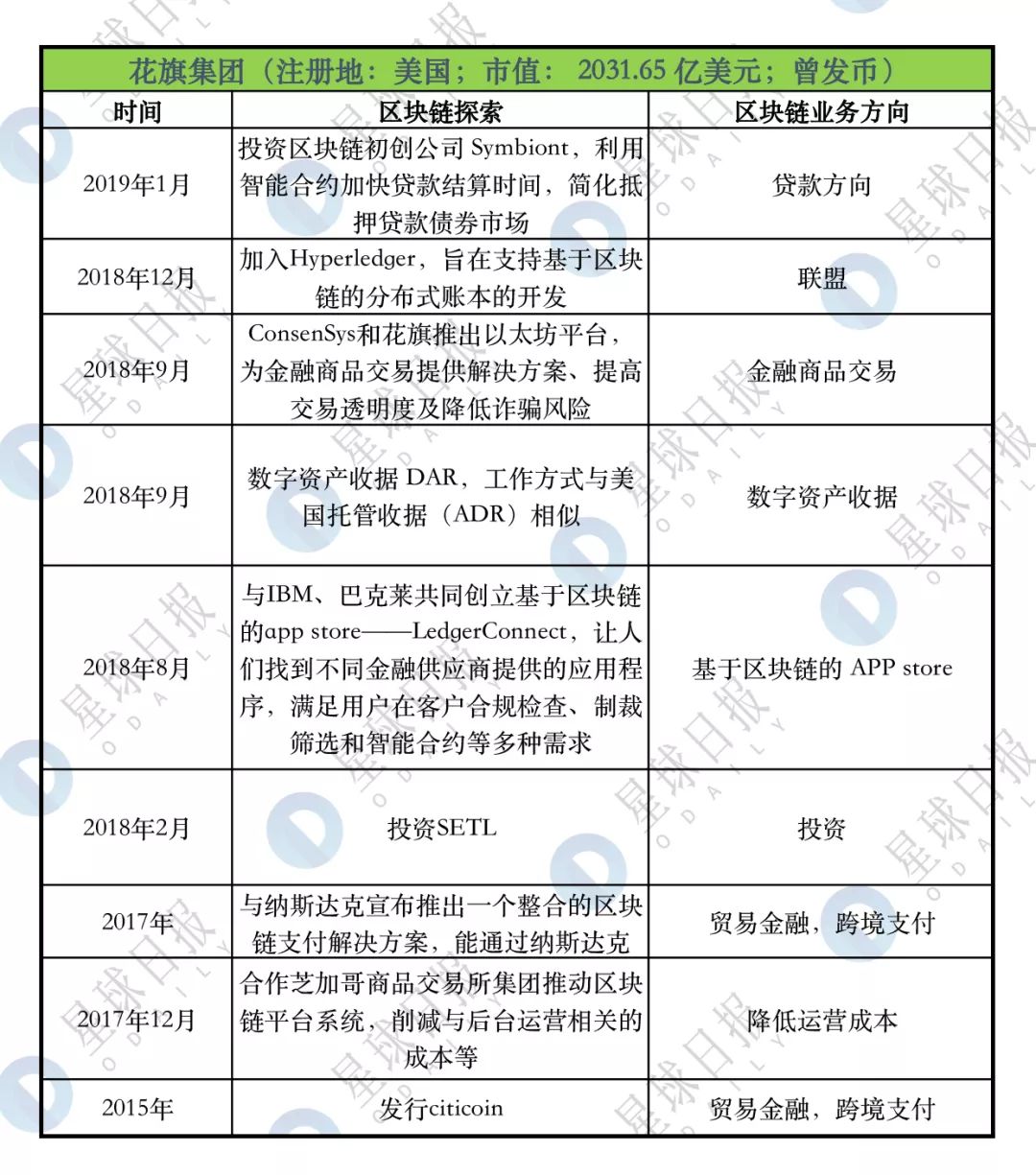 And JPMorgan Chase still has the heart to challenge and subvert SWIFT's hegemony. What is the intention?

In fact, before the launch of JPMcoin, JPMorgan launched the IIN, an interbank payment platform based on its own private chain “Quorum”. Under this program, JPMorgan Chase has formed a coalition of 185 banks, owned by JPMcoin. The initial landing application scenario.

As one of the largest financial services institutions in the United States, with both financial strength and a large pool of talent, JP Morgan Chase may indeed be the leader in this transformation.

Why are Bank of America keen on blockchain?

Although most of the above are in the stage of trial or demonstration, regardless of the final effect, the banks in the United States will almost certainly see the business of adding blockchain technology.

Why do US banks “hug” the blockchain?

The banking financial system is the economic lifeline of a country. Behind the “preferential” blockchain of Bank of America is the consideration of the profound political, economic and technological factors of the US government.

Since the Second World War, the United States has established an international monetary system with the US dollar as its core and holds the global financial dominance. However, with the strengthening of the world's political multi-polarization trend, especially the rise of the third world countries, the US's financial hegemony has been loosened. Moreover, the global trade dollar settlement system, especially international remittances, requires a dedicated network of banks, which is costly and time consuming.

The emergence of the blockchain has made the United States see an "opportunity."

The blockchain reshapes the cross-border payment business, absorbing the world's wealth flows to the United States through bank tokens linked to the US dollar, helping the US to continue to stabilize US dollar hegemony.

Second, the United States, which is good at playing currency games, certainly will not allow a trading market to be free from its own control. Bank of America actively lays out the blockchain, and by tying up with the US dollar, the cryptocurrency market is included in the network of the US financial market, and then competes for pricing power in the future cryptocurrency market.

Finally, blockchain technology has the potential to “fundamentally change” the trust and security issues of online trading, or become an important force in guiding the fourth industrial revolution.

The US government recognizes the huge potential of the blockchain. Just like the Internet concept of 1993, even if most people don’t know much about it now, after ten years, it’s completely impossible to imagine a society without blockchain technology. How to work.

(Note: This picture shows the blockchain layout of Mitsubishi, Goldman Sachs and UBS)