The short-term rapid pull-up has made ETH a short-term focus currency, and analysts have said that there is still a surplus in the short-term upside momentum.

CoinGape analyst: ETH breaks through the key resistance, the bottom support does not break, the acceleration can be expected 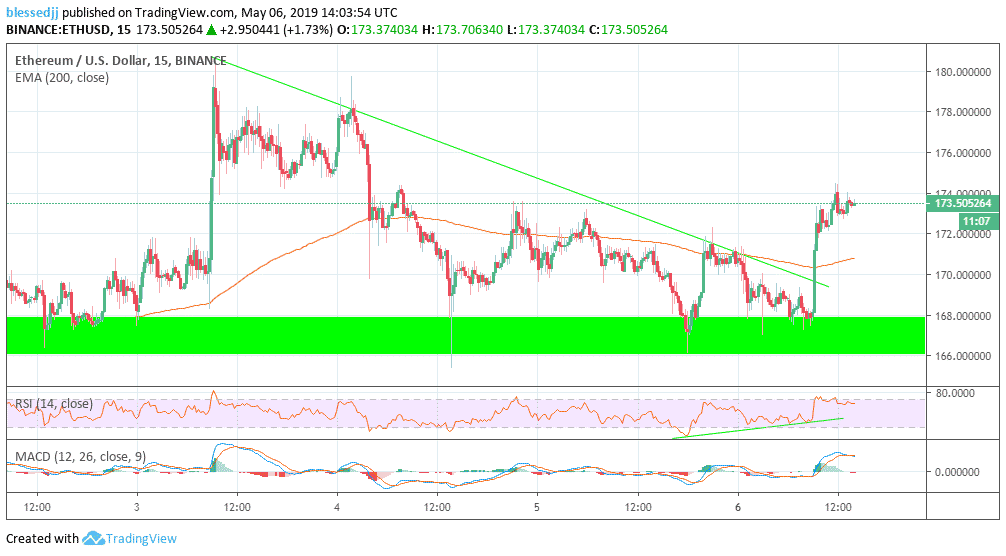 CoinGape analyst John Isige's latest analysis pointed out that ETH's shock concussion at the beginning of this month came to an end in yesterday's session. The market broke through a short-term surge and completed an effective breakthrough in the recent downtrend line resistance, although it is currently short. There are overbought callback expectations for the cycle technical indicators, but considering that there is still a 15-minute 200-period moving average support bond near the trend line, as long as the price is stable, the support area is not broken, and the recent surge of the surge has been difficult to reverse. The further increase target can be seen above 180, and the strong resistance is seen at 200.

NewsBTC analyst Aayush Jindal's latest analysis pointed out that ETH steadily rose after breaking through the previous small-scale downtrend channel on the previous day. The support rate of the 100-hour moving average has not been able to "match" the price. After the market broke through the 170-line, the wave of treads confirmed that the market's further gains were consolidated. Although the current price was temporarily frustrated by 180, as long as the support can be maintained in the process of correction of the indicator correction, the further increase potential still exists. The strong resistance above looks at the 200 integer line.

FXStreet analyst Tanya Abrosimova's latest analysis pointed out that ETH futures may be approved by the good news, ETH has made a very strong increase in strength since the European market yesterday, the 1-hour-level moving average system bullish signal is quickly completed, while the price is still It has been pushing the upper and lower rail openings of the Bollinger Band upwards. Although it has been frustrated in the upper rail of Bollinger, the short-term uptrend is temporarily difficult to fall. As long as the price holds the 172-174 regional support, the callback will still hit a new high.

Ethereum World News analyst Rachel Lee's latest analysis pointed out that EOS has been operating within a relatively standard equilateral triangle structure during the recent half-month decline and low-level shocks, and confirmed again with the recent wave of rebounds. After the effectiveness of the lower rail of the triangle, the strength of the lower support is considerable. As long as the price of the short-term indicator is stable, the lower bound of the structure will not break, the possibility of achieving an upward breakthrough in the future will be very high, and the structural upper trend line After the resistance is broken, a new round of accelerated growth is expected to start.

The latest analysis of Tradingview's Pento_Investment pointed out that although there was no violent rise in April, BCH's current round of rebound was also a considerable increase. The protagonists of these two days are Ethereum and Bitcoin, but now the currency circle is full of flying, and BCH is gradually advancing to 290 US dollars. Both the trend and the moving average are long positions. Opinion: See more, but many people may not be able to have the right points to enter the market. After the rise, the price fluctuation will be even greater, so short-term operations still need to pay attention to stop-loss.

Analyst: ETH will show strong resistance after rising to $ 440

Japan: A manual on cryptocurrency regulatory proposals has been developed and will be submitted to the G20 Summit Leader