The stolen stolen 7000 bitcoins allowed the risk of the centralized exchange to be exposed again, and everyone turned their attention to the Decentralized Exchange (DEX). It is theoretically safer for decentralized exchanges to keep assets and private keys for users. However, it does not mean that there is no problem.

Philip Daian , a well-known smart contract developer and a Ph.D. student at Cornell University in the United States, recently published a paper pointing out that arbitrage robots on decentralized exchanges can be used to raise transactions as high-frequency traders in traditional trading markets. The gas fee method gives priority to the location of the block and the priority execution of the order, and obtains arbitrage gains through operations similar to the " preemptive trading " in the traditional trading market. As human beings, they will be at a disadvantage when dealing with these arbitrage robots. 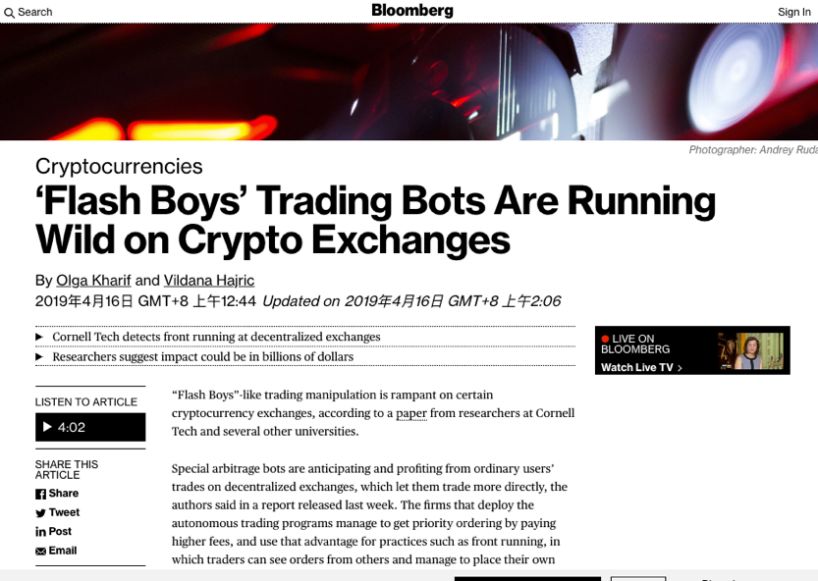 The results of this study have attracted the attention and reports of mainstream commercial media such as Bloomberg, and have also raised concerns about decentralized exchanges.

What is the preemptive transaction

The so-called "preemptive transaction" refers to the important information that will change the transaction price in advance, and profit from trading before the market.

In the simplest case, if a trader gets a message before the open market: an institution will buy a large amount of BTC in the next second, then within this second, the trader can buy the BTC first, and wait until the institution orders a large amount. At the time of purchase, the BTC on the market may rise because of the large number of purchase orders, and the trader can sell the BTC to the institution at a higher price at this time.

A successful preemptive transaction can have a very large return and a low risk, because before the trade, the trader has been able to determine that there will be a counterparty at a point in time in the future, and a certain profit can be obtained from the trade.

A simple analogy is used to further explain that each transaction is a runway, each trader is an athlete prepared at the starting point, the market information is the referee, and the first athlete who rushes to the finish line will make a profit. Then the legal preemptive transaction is that the referee shoots. All the athletes hear the gunshots at the same time and start running together. The fastest athletes are the first to rush because of their own strength. The illegal preemptive transaction was that the referee secretly made a gesture to the No. 3 athlete. The gesture was planned in advance. At this time, the No. 3 athlete started running because the other athletes did not know the secret number, so they rushed after the No. 3 athlete. 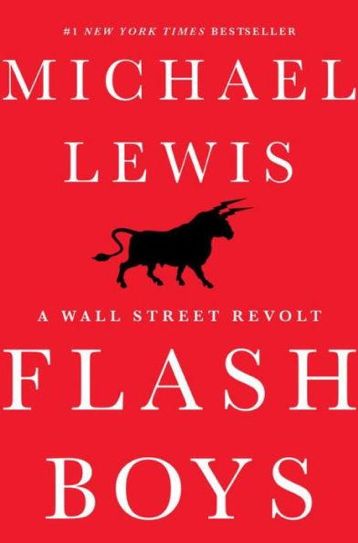 It is worth mentioning that the high-frequency preemptive transactions described in the book are not illegal. The reason is that high-frequency traders use their own software and hardware equipment to obtain public information at a faster speed, make faster judgments, place orders faster, and make transactions in front of other "athletes". Lee.

Although this practice is legal, it does not conform to "morality." The reason is also very simple. In the absence of supervision at all, high-frequency traders can buy servers closer to the exchange through their own financial strength, can lay faster cables, and hire more advanced programmers to write. Faster software, some of which are designed to grab public information before trading with ordinary traders. Throughout the process, high-frequency traders did not conduct economic analysis through market information. They simply engineered the transaction process efficiently and took the upper hand in this zero-sum game. This approach is the ultimate in shearing, without any benefit to the entire market, and the result is that the cost of ordinary traders is rising.

The preemptive transactions in centralized cryptocurrency exchanges are more like traditional financial markets. We are not specifically discussing here. Because most centralized exchanges lack supervision, preemptive transactions can be seen as insider trading, and players who get insider information ahead of time for various reasons become the biggest profiteering party.

If you look at it from another angle, you can even think of the exchange as a preemptive transaction, because this is a typical operation team to get information before the user to make judgments, and to cash out.

The pre-emptive transactions of decentralized exchanges are more complicated and there has been discussion in the market.

All of this looks good, but due to the technical nature of trading on the smart contract chain, preemptive trading has been rampant in decentralized exchanges.

Researchers at Nelson Daian, Steven Goldfeder, and Tyler Kell at Cornell University recently published a paper that found that arbitrage robots on decentralized exchanges can use decentralized centers like high-frequency traders in traditional trading markets. Part of the weakness of the exchange, gaining arbitrage gains. The paper points out that these arbitrage robots give priority to the location of the block and the priority execution of the order by raising the price of the transaction gas. By preemptive trading, the ordinary trader is at a disadvantage when dealing with the robot.

Philip Daian is currently a Ph.D. student in the computer science department at Cornell University, but has emerged in the field of distributed systems and cryptography. In 2017, under the direction of Elaine Shi, he published a paper entitled " Snow white: Provably secure proofs of stake" and made great achievements in smart contract security.

To make it easier to understand the findings of the Philip Daian team, let's first list the features of the decentralized exchange :

Based on these characteristics, smart players can find a process of moving bricks to cover the spread :

Based on observations, Philip Daian and the research team concluded the following conclusions :

At the end of the article, through the simulation, the paper also analyzed two important blockchain protocol layer security vulnerability risks. However, since this article only discusses arbitrage logic, it will not be elaborated here.

How to solve the problem of preemptive trading?

In fact, it’s not just arbitrage robots that cause bidding. This vicious bidding can even happen between a few normal users. Due to the limited flow of blockchain, when many people try to trade, they will naturally raise the fee slowly. Just like the traffic increases every time the bull market rises, the transaction fee on the chain will skyrocket.

This seems to be an inevitable shortcoming of the current decentralized chain trading.

In the traditional trading market, the problem of preemptive transactions is also being explored. Brad Katsuyama, a character in the book "The Flash vs. A Wall Street Uprising", has established a new stock exchange called Investors Exhange in recent years. The core design of the exchange is guaranteed by new rules. Information can reach the user in the same period of time, thus preventing large customers from preemptive trading through engineering speed.

It is worth mentioning that Chanan seems to want to use the same system design to counter the unfair preemptive transactions against retail investors (details in the official document https://docs.binance.org/anti-frontrun.html) .

Just as the community explores decentralized governance, we seem to realize that simply translating information transparency and fair distribution of rights does not solve all problems. It is very likely that we still need a decentralized regulatory mechanism to allow users to protect their own interests through management mechanisms. Of course, how this is combined with the concept of "decentralized" encryption world is still a long road of exploration.

Opinion: Is the long tail…

The second "uprising" of the… 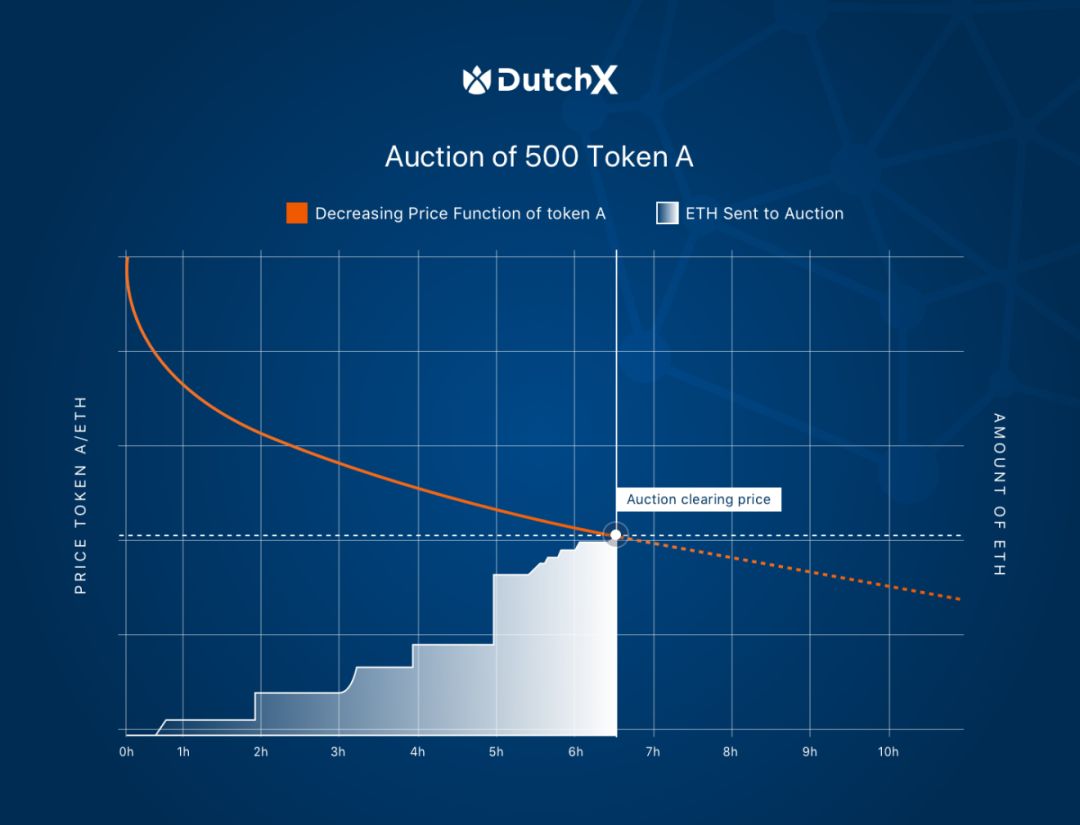 Former Researcher of the Institute of Finance of the Chinese Academy of Social Sciences: It is of little significance for the central bank to issue digital cryptocurrencies

Viewpoint: With the blessing of blockchain, etc., digital transformation of the supply chain has become inevitable

Market Analysis: Bitcoin faces the test of the 15th moving average of the sky, and the key points are coming!