Recently, the chain of pulse statistics A shares, Hong Kong stocks, US stocks, nearly 90 listed companies that have disclosed blockchain business, including BATJ, Anne shares, Sifang Jingchuang, Hang Seng Electronics. Through their publicly published annual reports and announcements, find out what these companies doing blockchain business are doing? To what extent has it developed? According to the statistical information, the blockchain map of Chinese listed companies is drawn: 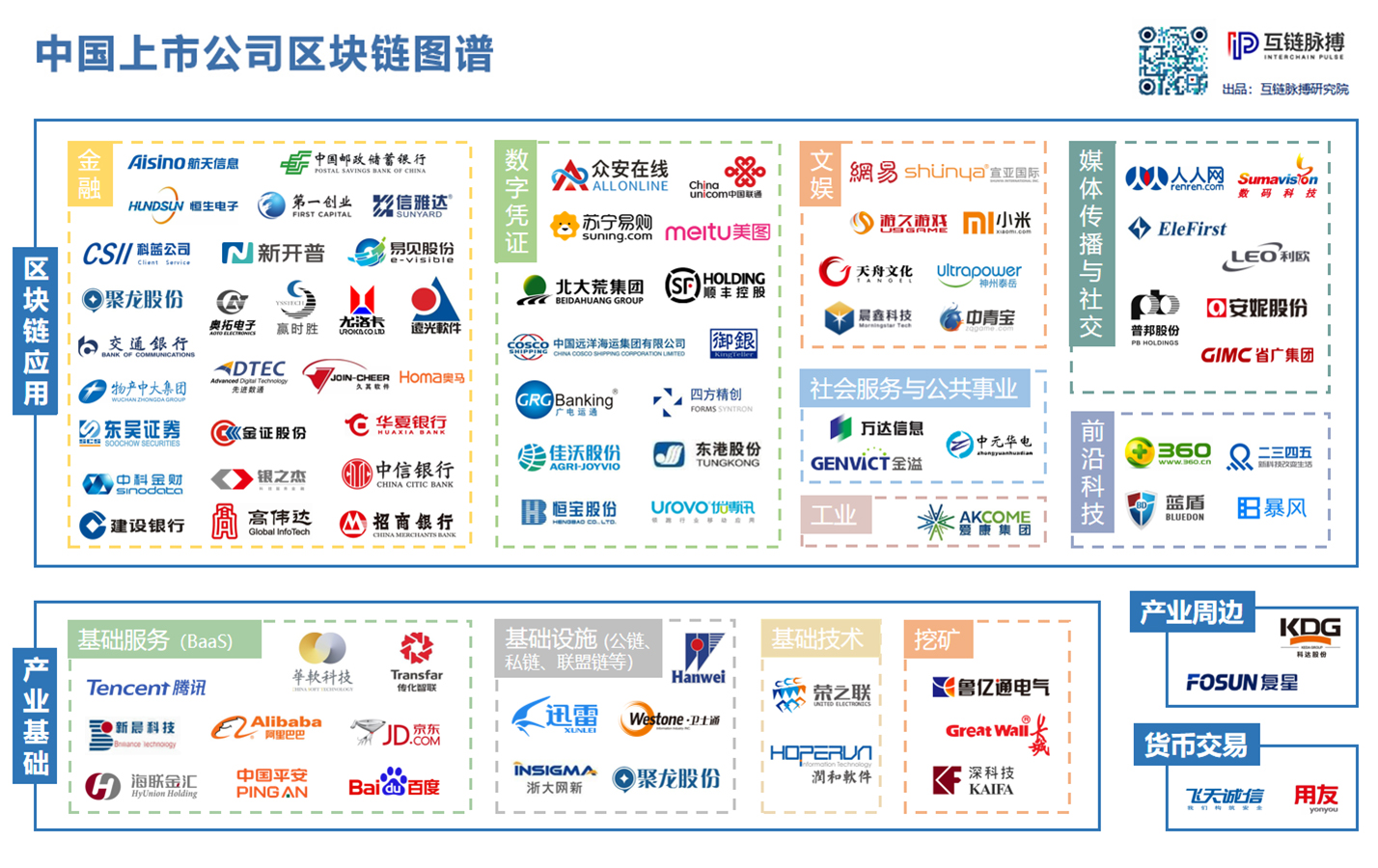 Mutual chain pulse observation of 88 domestic listed companies involved in blockchain business, the main listed place is the Shenzhen Stock Exchange. There are 76 companies in the A-share market, accounting for 86%; there are 6 Hong Kong stocks and US stocks, each accounting for 7%. The main business of each company involves financial, software and information services, and communication. In the practice of blockchain business, it focuses on four areas: blockchain application, industrial base, industrial periphery and currency trading. 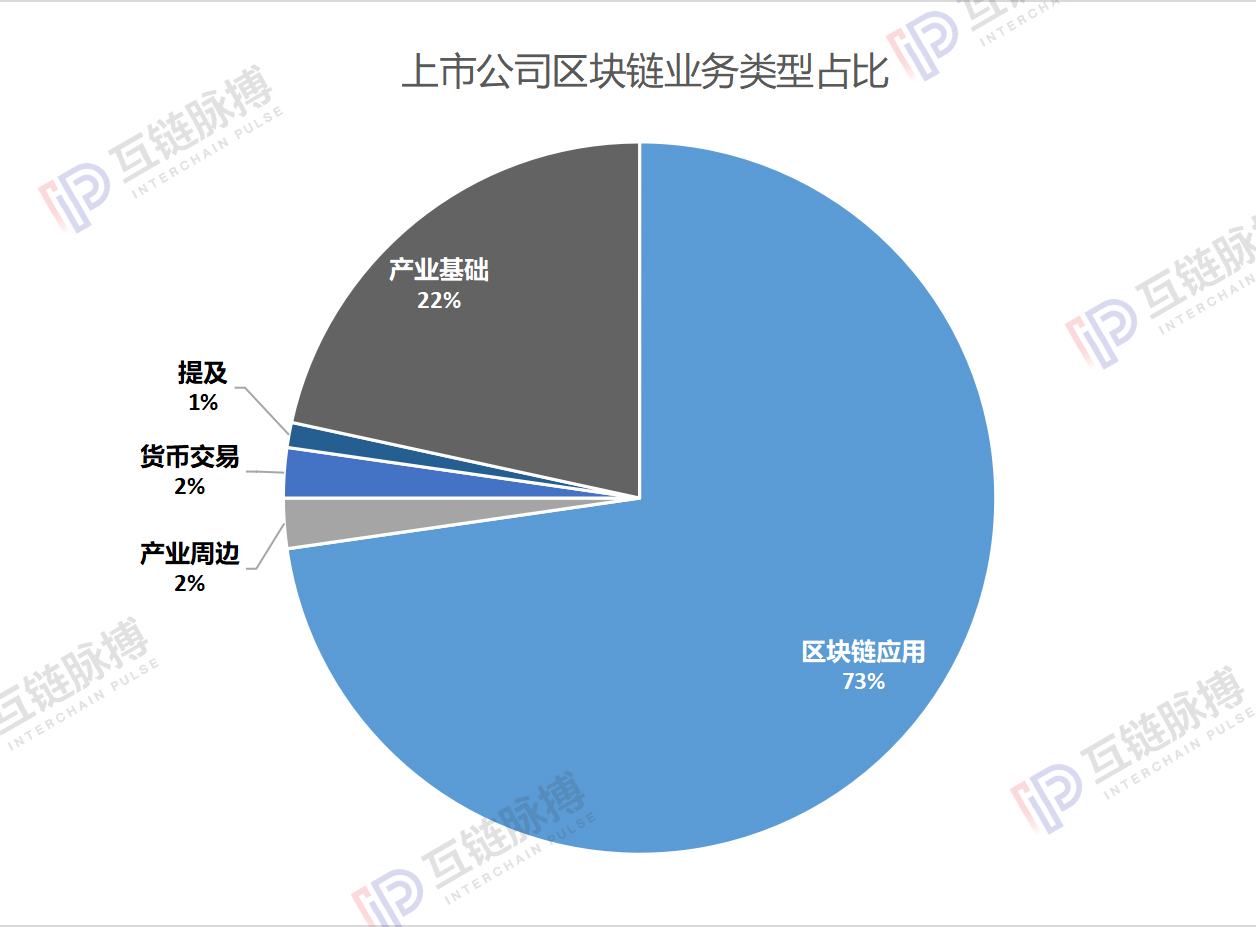 Among them, Keda and Fosun International belong to the investment field in the industrial peripheral areas.

The blockchain business of Feitian Integrity and UFIDA Networks is in the field of currency trading.

According to the annual report of Feitian Integrity, in September 2018, the company released the JuBiter Blade, a new generation of digital currency cold wallet hardware products; UFIDA previously used Bodang technology for 10 million RMB. Bochen Technology was originally positioned as a blockchain technology standard and solution provider, but some commented that it has gradually transformed from blockchain technology company into an exchange company. 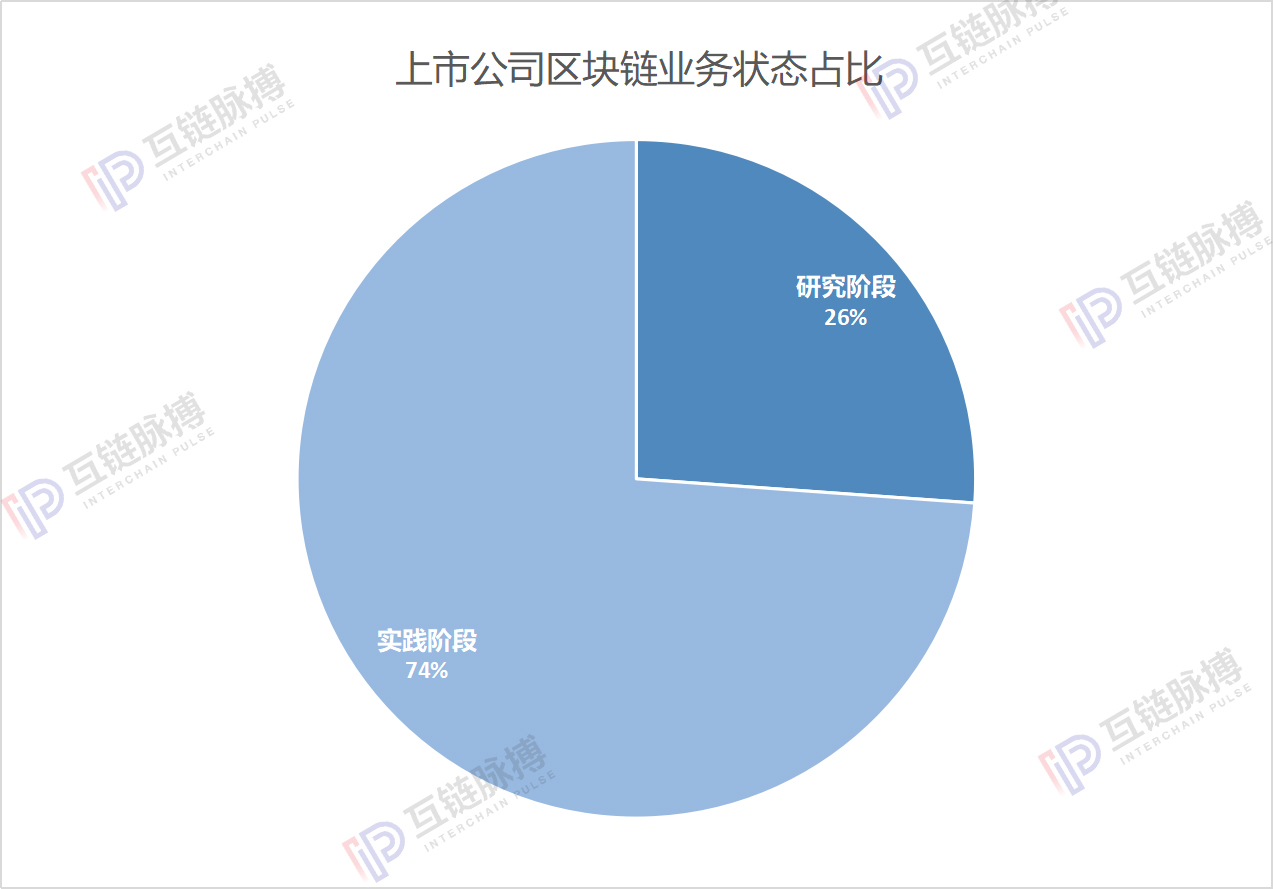 In its 2018 annual report, Jinzheng Co., Ltd. stated that the company vigorously carried out exploration and research on emerging technologies such as cloud computing, big data, artificial intelligence and blockchain based on the Internet and mobile Internet; digital technology also revealed in the annual report, the company Digital rights management techniques based on blockchain are currently being studied. 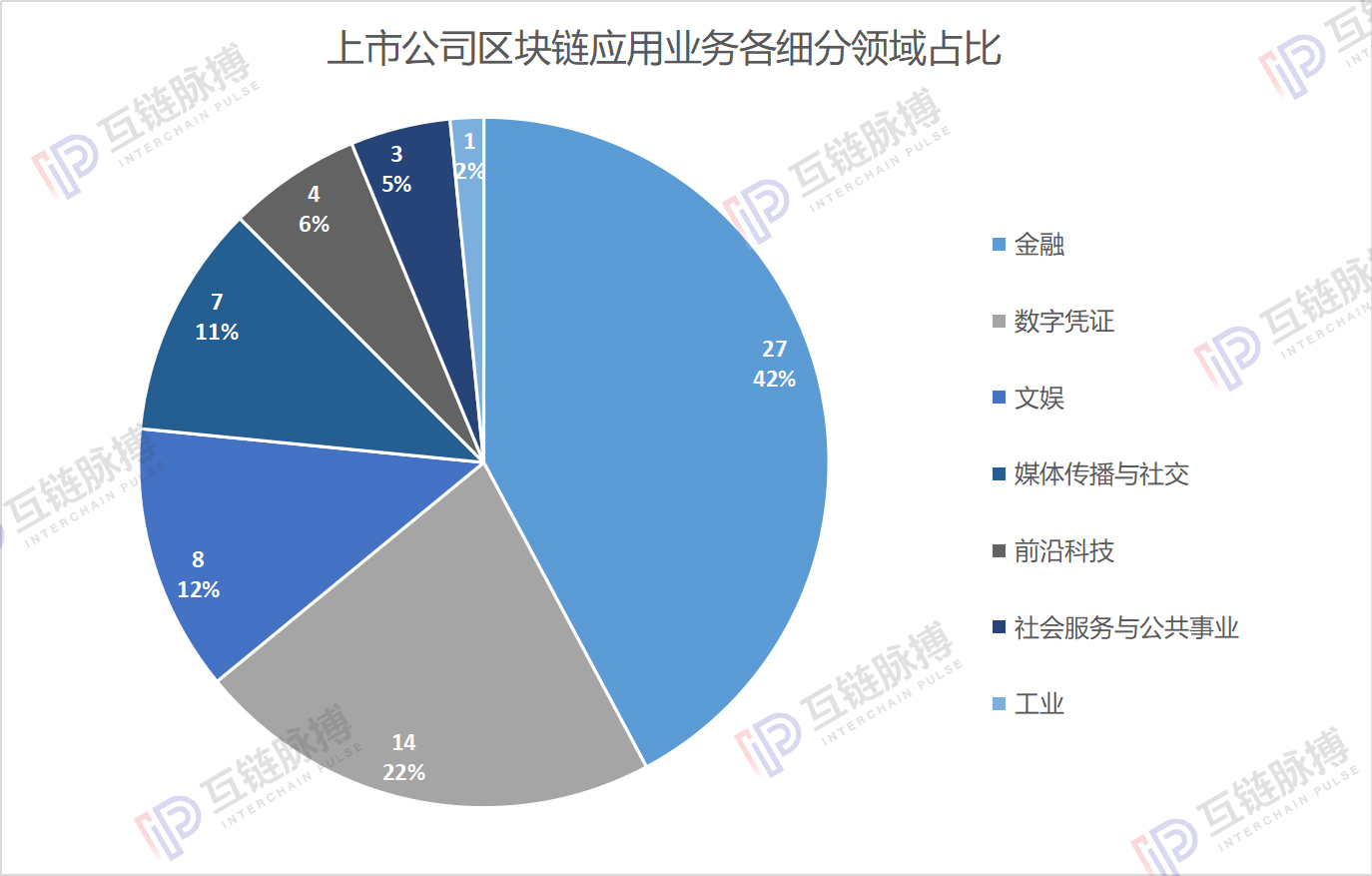 Therefore, based on the financial application field, the inter-chain pulse has been divided into two sub-divisions, which are mainly divided into 11 sub-areas such as banking, payment, securities, insurance, asset management, asset certification, and supply chain finance. 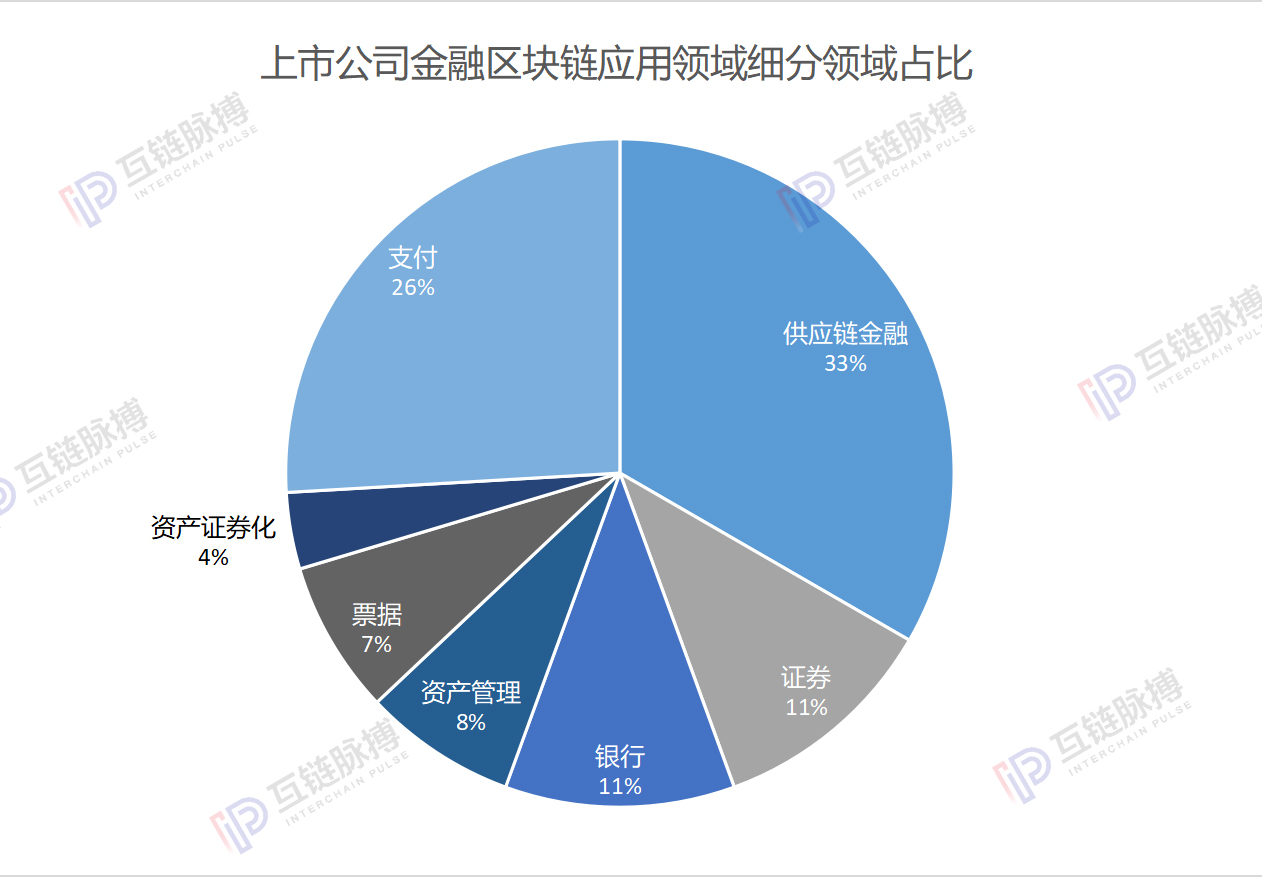 Among them, part of the bank: the 2018 annual report of the Postal Savings Bank shows that the bank actively develops the smart, convenient and safe blockchain Forfeiting asset trading platform, and continuously optimizes the function of the online supply chain financing platform; CITIC Bank released the first “Zone” The blockchain + supply chain pilot innovation project and the joint industry have established the largest blockchain cooperation ecology among domestic banks; Huaxia Bank Annual Report pointed out that the use of blockchain technology is actively carried out, and the blockchain is piloted in the Xiong'an Group construction project. + Business cooperation model of the supply chain.

In addition, the payment field in the financial sector is also the focus of the development of listed companies, with 7 related explorations (26%). For example, the annual report of accurate information shows that the company has newly invested in the operation and maintenance payment platform based on blockchain technology in the field of big data; Kelan Software has cooperated with Tencent Financial Cloud in 2018 to develop the application of the city commercial bank bill of exchange blockchain, and the bank draft Digitization, realizing bank bill of lading information and query function; Julong has launched a RMB circulation management solution based on blockchain technology.

Among them, companies focus on both traceability and digital identity authentication. Eight companies including Suning Tesco, Zhongan Online, Beidahuang, and SF Holdings have practiced in the traceability of blockchain. 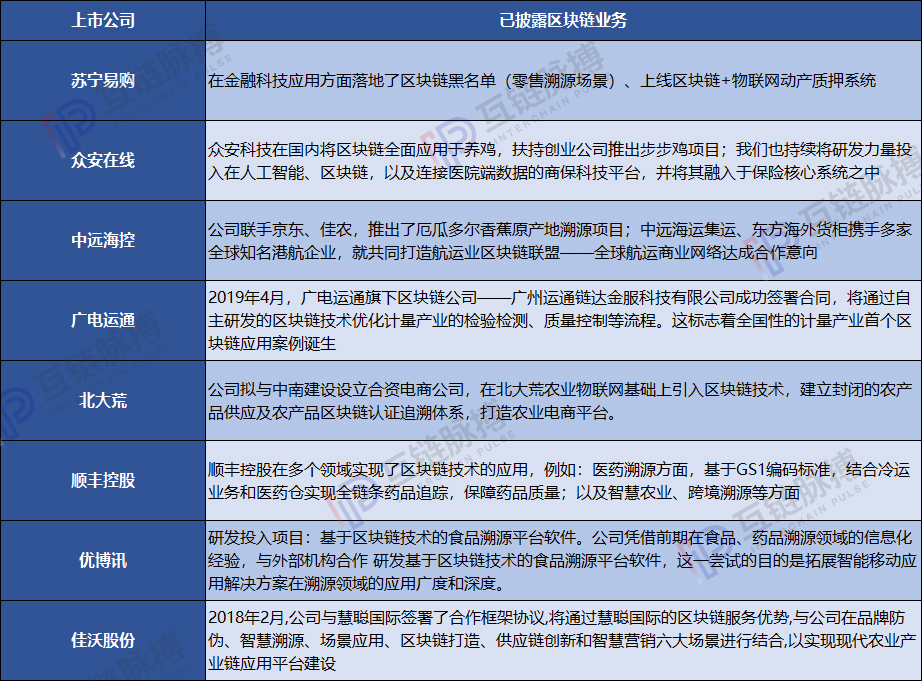 Four companies, including Meitu, China Unicom, Sifang Jingchuang and Yuyin, are promoting the development of blockchain in digital citizenship and digital identity authentication.

Mutual chain pulse observation, in addition to the financial and digital vouchers field closely integrated with blockchain technology, the entertainment field including game category, as well as the media communication and social field are also the main directions for the development of listed companies, accounting for 12% respectively. 11%.

While most companies develop blockchain applications, some companies are also building industry bases, including basic services, infrastructure, basic technologies, and mining. Most of these industries are based on traditional Internet companies, such as BATJ and other areas of the BaaS platform in the basic services. Thunder actively deploys the public chain in the infrastructure field. As a result, the inter-chain pulse breaks down the basic service area into six aspects: media, market-related, enterprise services, BaaS, security protection, and quantification. However, the nine listed companies that belong to the basic service sector are all concentrated in the BaaS platform. This includes not only Internet giants such as BATJ, but also companies such as China Ping An, Xinchen Technology, and Chuanhua Zhilian.

According to the 2018 annual report of Hailian Jinhui, its company independently developed the blockchain bottom layer framework and excellent chain system, based on the excellent chain system of “excellent chain cloud deposit certificate platform” and “blockchain-based cross-border factoring financing”. The credit management platform has been put into operation. Huasoft’s annual report also revealed that the company has independently developed a “simplified chain” platform using technologies such as blockchain, which can seamlessly link core companies and their upstream and downstream asset parties and various financial institutions and other financial institutions to help enterprises finance. development of. 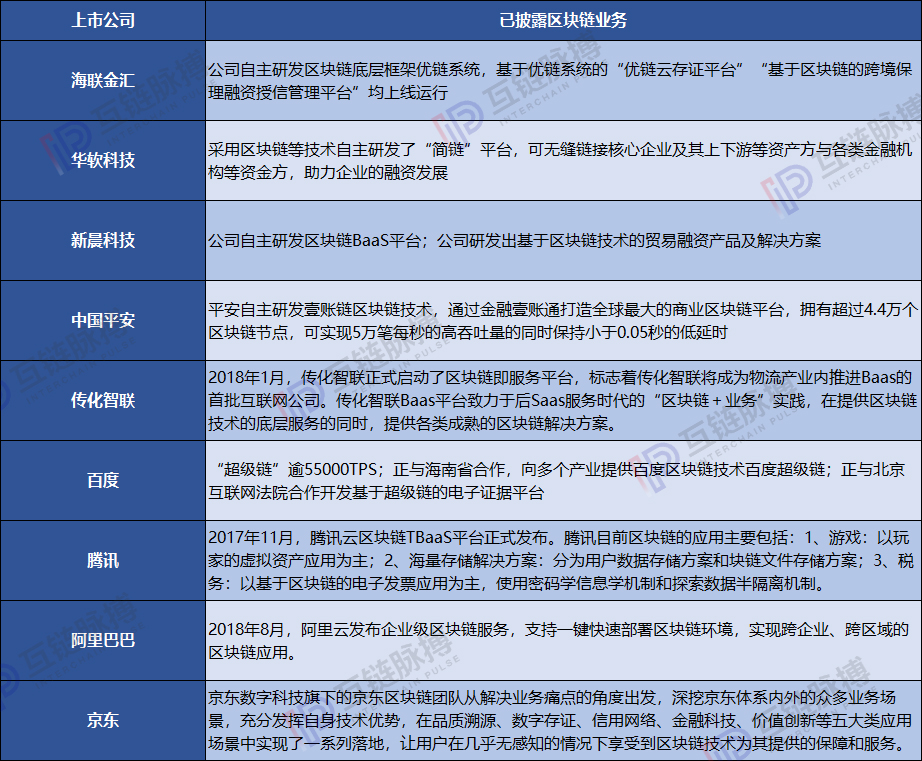 In April 2018, Thunder released the world's first blockchain application with a million-level concurrent processing capability – Thunderbolt. In this annual report, Thunder also mentioned the blockchain business: By providing high-performance blockchain underlying technology services to the market, Thunder has become a leading company in the blockchain industry.

Shen Technology has previously said that the company is one of the largest manufacturers of bitcoin mining equipment products in China, and is currently also negotiating cooperation opportunities with China Bitcoin in artificial intelligence applications; and the main subsidiary of Luyitong acquired Jianan Zhizhi The product is a self-developed digital blockchain computing device with an ASIC chip as its core.

PricewaterhouseCoopers report: emerging technologies such as blockchain and 5G have become a force to be reckoned with