On April 22nd, the EOS node EOS Nation initiated a proposal to destroy the 34 million EOS (specific value 34171037.4625 ) in the eosio.saving account. According to the market price, this part of the fund is as high as 1.1 billion yuan.

On the morning of May 8, after obtaining approval from 15 of the top 21 outbound blocks, instructions were executed to destroy this part of EOS.

Eosio.saving Why does the account exist? Why did you accumulate so many EOS? What is the story behind the proposal to destroy EOS? After the adoption, what impact will it bring to EOS?

On the EOS main web, there is a mysterious system account: eosio.saving, before the destruction, the EOS in this account is as high as 35,747,738. 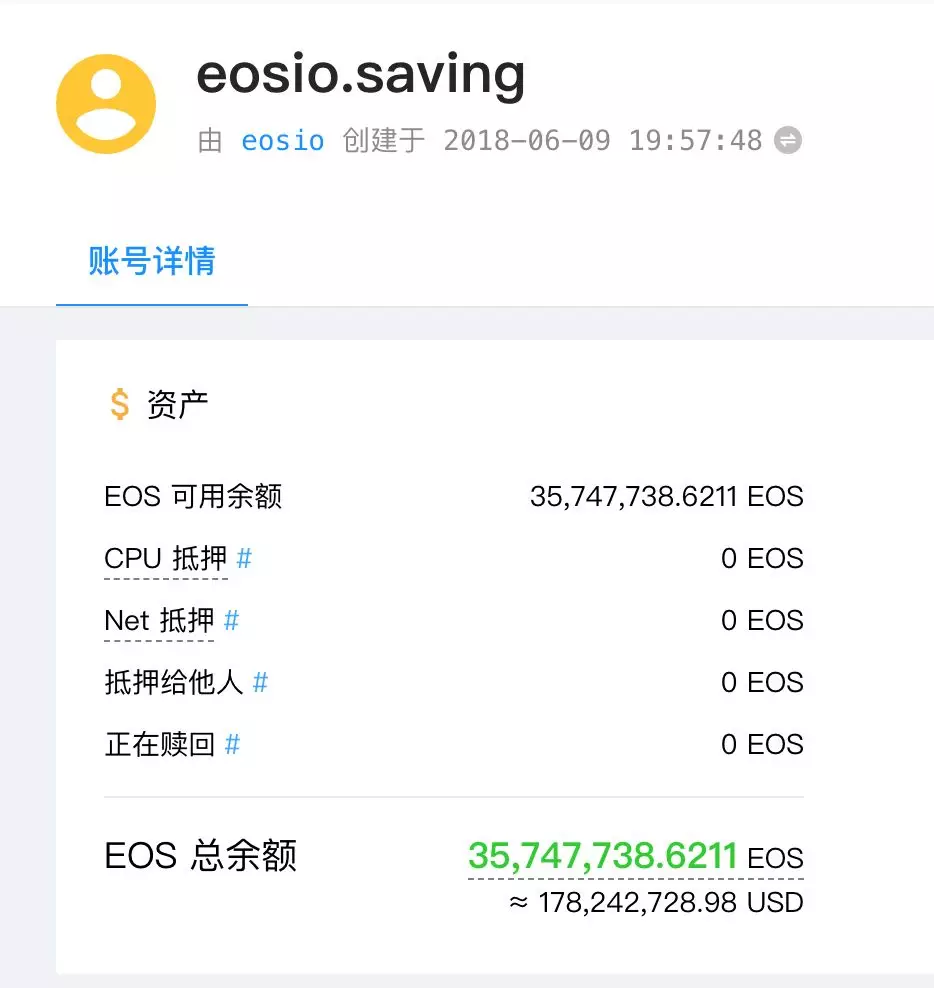 How to deal with and allocate this part of the funds has always been one of the hot issues in the EOS community. The most popular opinion is to destroy. So, why did you design this account?

The story begins with the first edition of EOSIO's white paper two years ago.

2. The original intention of the design of eosio.saving

The funds in eosio.saving are originally allocated to the community to fund applications that benefit the community.

The first edition of the EOSIO Technical White Paper, released in July 2017, mentions:

In addition to assigning additional EOSs to give block nodes for incentives, users can also choose to support three community benefit applications. These three applications will receive financial support. In the EOS annual inflation section, the remaining components are allocated to the three community welfare applications, except for the rewards assigned to BP.

Later, in the second edition of the EOSIO technical white paper released on March 16, 2018, this part was modified in wording. It is no longer a three community welfare application, but a worker proposal system (Work Proposal System). ). However, the purpose is also consistent and financial support is provided for proposals that benefit the community.

How is the accumulation of up to 34 million EOS?

Although this part of the original plan was used for distribution to the Workers Proposal System (WPS), the community has not agreed on the allocation and use of this part of the funds. In addition to the sound of destroying this part of the funds, the initiative to develop WPS has been attracting attention in the EOS community since the main online line. However, the WPS system has not been officially launched. In addition, the community has also proposed the EOS Public Development Fund (CDF) program evolved from WPS (however, it is understood that this proposal has received little attention and support in the EOS community. Due to space limitations, No longer open).

After the EOS main online line, the eosio.saving system account assumes the responsibility of storing unallocated inflation funds. This part of the funds has never been used since the account was activated to destruction. 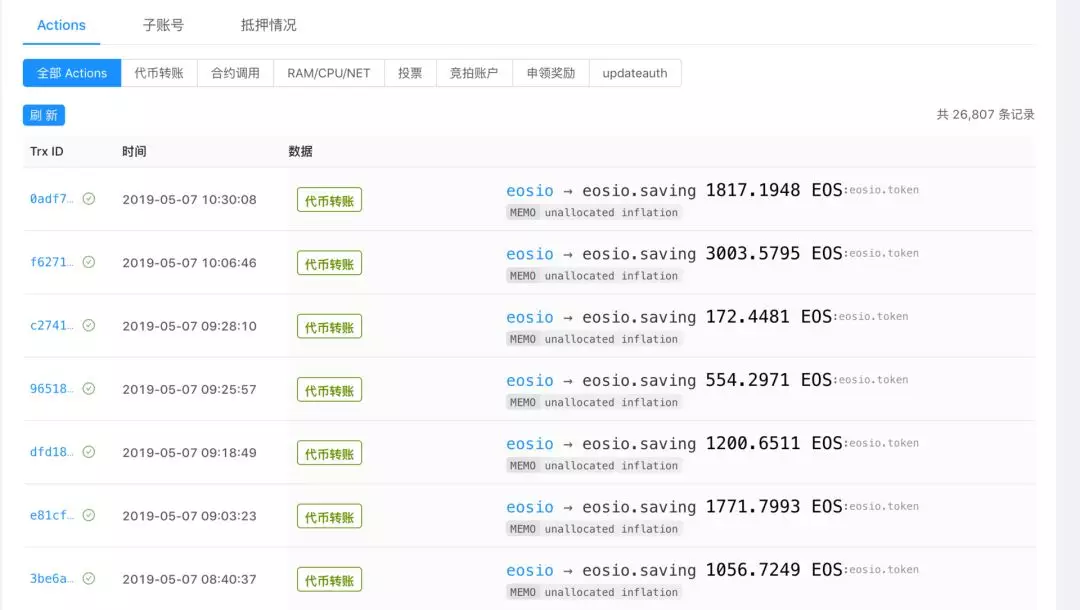 Looking at the EOS browser, we can see that the eosio.saving account continues to receive transfers from eosio. So how is this process going?

Each time the block node claims a reward, the EOS system will issue additional shares in proportion. As mentioned above, the current annual EOS inflation rate is set at 5%. 1% of them were used as incentives for the EOS Super Node (including Block Nodes and Alternative Nodes); the other 4% were transferred to the eosio.saving system account.

This is a bit of abstraction, then let's look at a concrete example. The figure below shows the corresponding record when the EOS42 node (the account number is eos42freedom) claims the reward. EOS will issue additional shares and transfer the unallocated inflation to the eosio.saving account. 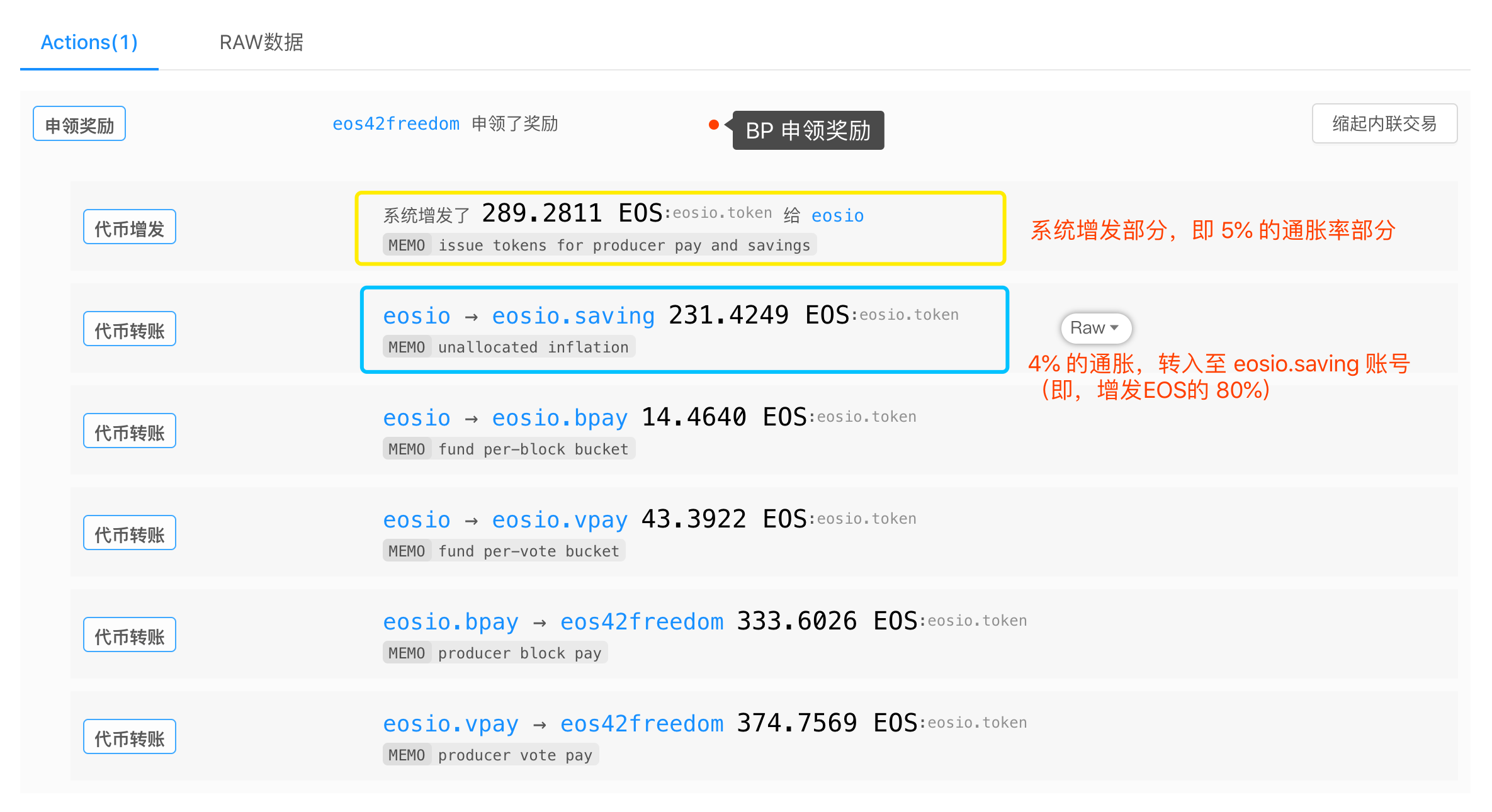 If you are interested in continuing the analysis, you can see that when EOS42 initiates a claim, there are the following processes:

On April 22nd, the EOS node EOS Nation launched a proposal on the main network, proposing to destroy the 34 million EOS (specific value 34171037.4625 ) in the eosio.saving account.

On the EOS main network, the multi-sign proposal initiated by the block node needs to obtain approval from at least 15 out-of-block nodes of the first 21 out-of-block nodes to enter the execution phase. More complex proposals are often divided into multiple parts, and a series of proposals are initiated and submitted to BP for approval. The proposal to destroy 34 million EOS is divided into two parts:

Step 1: Release an announcement in accordance with EUA regulations

According to Article 7 of the EOS User Agreement (the latest version of the EOS Convention), all proposals involving changes in the status of tokens in the EOS Network Asset Account require a proposal to be issued on the eosio.forum referendum contract. Describe, inform the EOS community about the changes and impacts.

After this step is passed, the announcement is posted to the eosio.forum contract, which means that at least 15 of the first 21 out nodes have agreed to the change, agreeing to destroy the 34 million EOS in eosio.saving.

On the morning of May 7, the proposal passed the approval of 15 of the first 21 EOS nodes for the first time. However, at the time of execution, due to insufficient resources of the contract, the execution failed, and BP re-launched the proposal.

On May 8, EOS Nation re-launched the proposal, which was approved.

2. How to destroy after the proposal is approved? 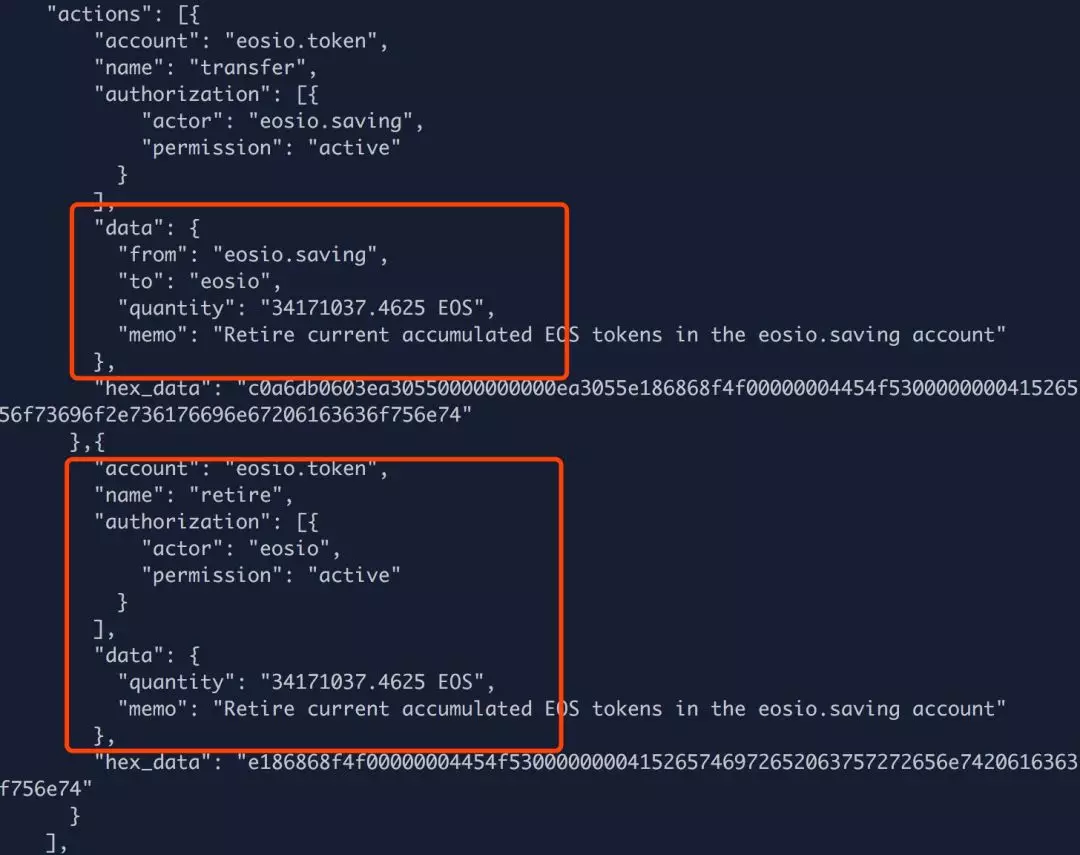 The destruction process is briefly described as follows:

Thus, the 34 million EOS in eosio.saving is destroyed.

Yves La Rose, one of the EOS Nation team members who initiated the proposal, said earlier in the telegraph group that after destroying EOS in eosio.saving, if the community has a real need for this part of the fund, there are more than 100,000 per day. EOS will continue to import into the eosio.saving account and still be able to meet these needs. In addition, Yves also mentioned that it is possible to initiate a second destruction proposal in the future.

On May 5th, BM stated in the telegraph group that it is strongly recommended to cancel 4% inflation and destroy EOS in eosio.aving. He believes that inflation will only be considered when BP's costs increase.

On April 24th, EOS node GreyMass wrote an article entitled "Inflation, Centralization, and DPoS" for this proposal, arguing that for the important issue of EOS inflation, more in-depth discussion is needed. . The paper argues that one needs to consider the potential impact of avoiding the centralization problem caused by the allocation of inflation, and one of the solutions is to balance and avoid a single group such as BP as the sole recipient of network rewards. In other words, GreyMassz fears that if the bonus is only allocated to BP, there is a danger of a centralization trend. (See: https://blog.greymass.com/eos/@greymass/inflation-centralization-and-dpos )

On May 3, Youtube blogger Coin Talks Crypto sent a message about EOS inflation. The article argues that it is necessary to balance another inflation source with 1% inflation allocated to BP. Assigned to non-BP community developers and creators (see: https://www.colintalkscrypto.com/article/inflation-on-eos.html )

Impact of the first destruction of EOS 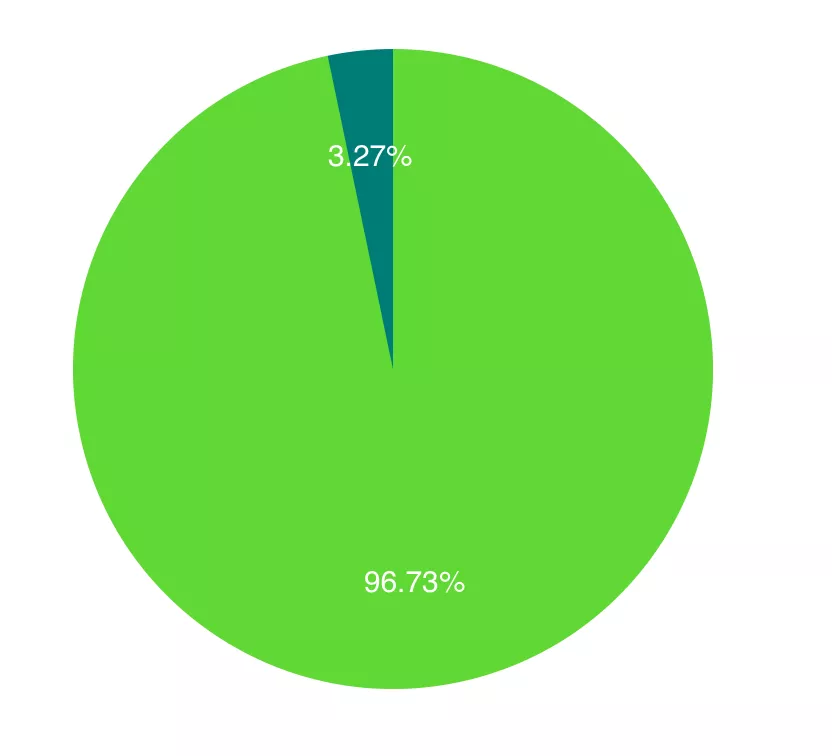 More than 44 million have been issued. After the EOS destruction proposal in eosio.savings, 34 million EOS will be destroyed, and the total EOS circulation will be around 1,010,589,358 EOS.

This means that the current EOS circulation will be reduced by about 3.2%.

For the holders, the reduction in the total EOS circulation has caused a change in the EOS liquidity, which may lead to an increase in EOS expectations . However, since the impact on the digital asset trading market is diversified, EOS The impact of circulation does not constitute a sufficient condition for EOS to rise. In addition, half a month after the launch of the destruction proposal on April 22, the expectation of a reduction in EOS circulation has been known and digested by the market in advance.

On the other hand, the destruction of the 34 million EOS in eosio.saving will also affect the revenue of the EOS block. After the implementation of the proposal, the reward of the main network BP will be reduced by about 3.2%. This is because the design mechanism of EOS inflation, because the proportion of BP rewards is fixed, the reduction of the total circulation will result in a corresponding decrease in the block node reward.

Further discussion of the inflation mechanism of EOS in the EOS community.

The proposal only destroyed the 34 million EOS in the eosio.saving account at one time, and did not modify the mechanism of the EOS issuance.

So, will the follow-up launch a proposal for the destruction of EOS funds in eosio.saving? On this issue, EOS BP and the community have not yet reached a consensus. Since there are still 100,000 EOSs entering the eosio.saving account every day, if there is no community-approved plan for allocating this part of the funds in a short period of time, there is still a high probability that the proposal will be initiated and destroyed by eosio. Funds. If the community has a proper plan to spend this part of the funds, although the 34 million EOS was destroyed, the eosio.saving account continues to accumulate funds enough to meet the demand.

At present, the existing node release code publicity, it is proposed to make institutional changes to the EOS main network inflation mechanism, the inflation rate is directly set to 1%, and no longer injected funds into the eosio.saving account. If the proposal can be launched and passed, I believe the EOS community will give an answer in the future.

The eOSio.saving account has completed the destruction of 34 million EOS, which is equivalent to a 3.2% reduction in the current circulation of EOS tokens, which directly reduces the total liquidity of EOS.

In addition, the EOS R EX deployment on May 1 was launched, and in the REX fund pool, more than 56 million EOS have been accumulated so far. This part of the funds will be locked, which will further reduce the circulation of EOS tokens.

Although these advances have an impact on the EOS market price, we cannot accurately estimate it. However, behind these proposals, we can see the continuous exploration and development of the EOS community. Perhaps this is where EOS is more valuable than the proposal for asset destruction in EOS REX and eosio.saving.

Message Mining No. 226 : * * What effect do you think will be destroyed in one time? **Welcome to share your opinion in the message area.

* * "Declaration : This article is the author's independent point of view, does not represent the vernacular blockchain position, and does not constitute any investment advice or advice. 』**