On May 07, 2019, Beijing time, blockchain security company Zeppelin issued a security warning to DeFi star project MakerDAO on Ethereum, claiming that there is a security breach in its governance contract, and hopes that users who have locked the voting will unlock MKR as soon as possible. . MakerDAO's developer Maker also confirmed the existence of the vulnerability and launched a new governance contract, claiming that the vulnerability has been fixed.

After the security threat was exposed, PeckShield tracked the transfer of MKR tokens and issued a warning to the community several times, calling on MKR token holders to immediately transfer the MKR tokens of the old contract. Up to now, most of the MKR tokens have been transferred, and there are 2,463 MKR tokens (worth about $1.28 million) in the old governance contract to be transferred.

On May 07, the independent research by PeckShield found that the existence of the vulnerability (we named itchy DAO), specifically: due to some defect in the voting mechanism (vote(bytes32)) implemented by the governance contract, Vote for a slate that doesn't exist yet (but includes a proposal that is voting). After the user votes, the attacker can maliciously call free() to exit, to reduce the legitimate votes of the valid proposal, and simultaneously lock the voter's MKR token.

Here we publish the details of the vulnerability and the attack method, and hope that other DApps that reference this third-party library contract can be fixed as soon as possible.

In the design of MakerDAO, users can participate in their governance mechanism by voting. For details, please refer to DAO's FAQ.

Here are the details about itchy DAO. Users can lock and vote for MKR on their hands with lock / free: After lock locks MKR, one or more proposals (address arrays) can be voted on: 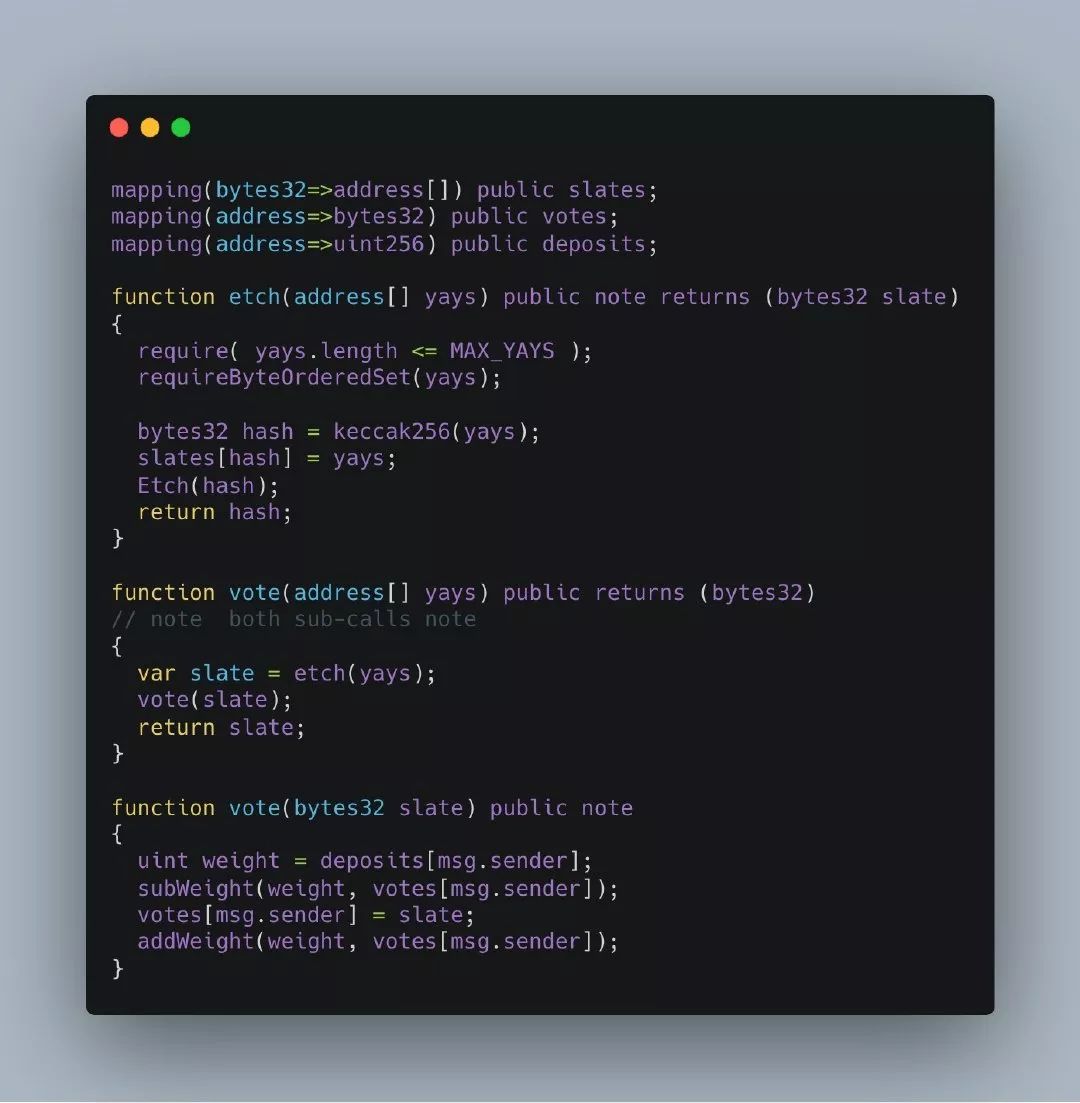 Notice that there are two vote functions, the difference between the two is different (address array and byte32),

The vote(address[] yays) will eventually call vote(bytes32 slate), whose general logic is as shown below: 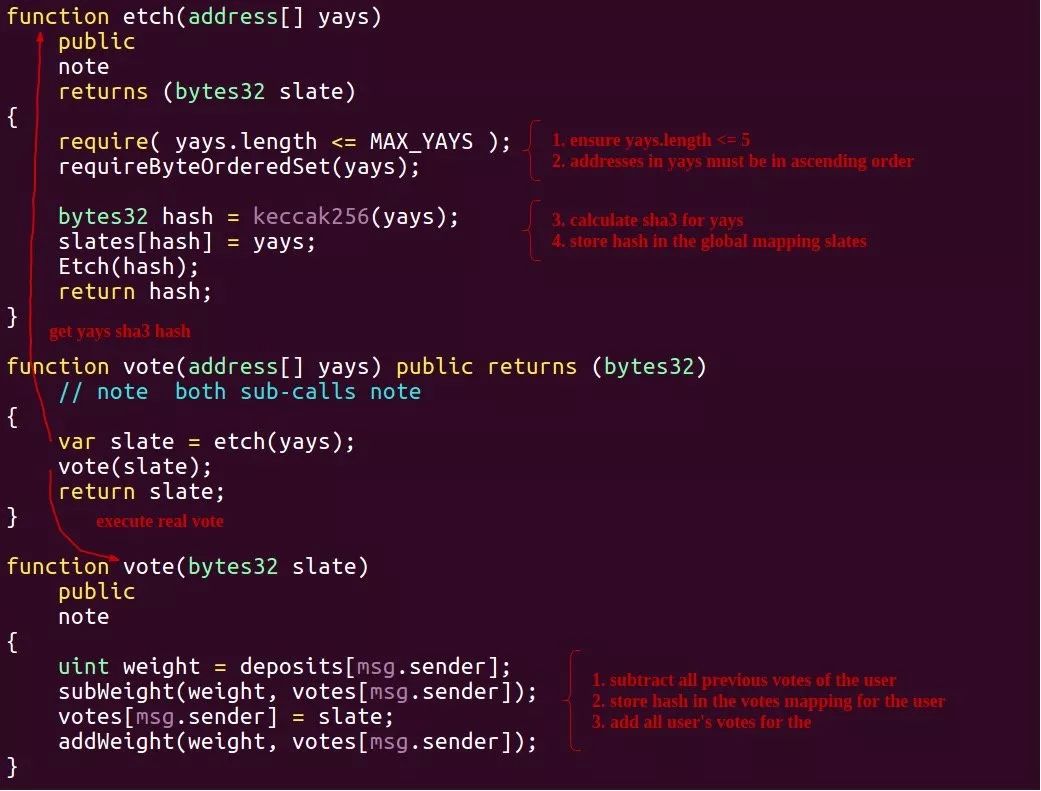 To put it simply, the two votes are the same, and finally call addWeight to put the locked ticket into the corresponding proposal: 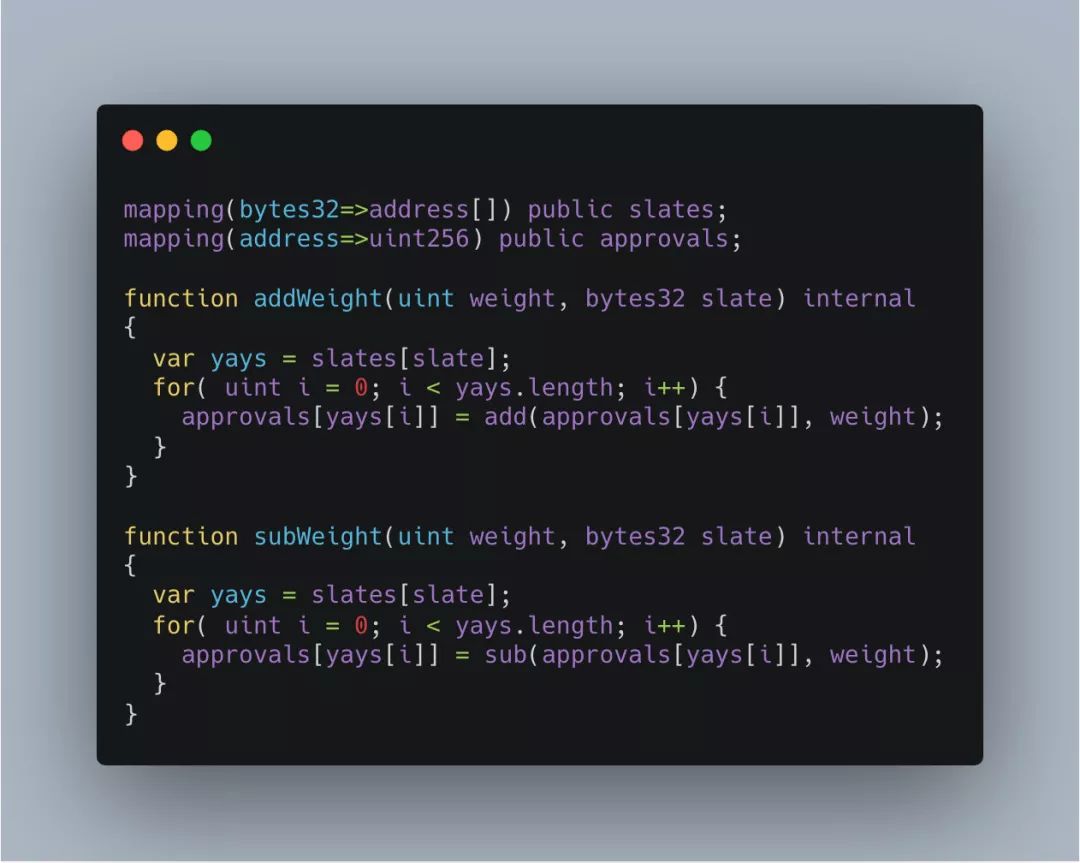 Unfortunately, due to the mistakes in the design of the contract, the attacker has the opportunity to maliciously manipulate the voting result through a series of actions, so that the locked MKR cannot be taken out.

Here we assume that there is a hacker who has never voted to start an attack: From the above analysis, we understand that hackers can cause the following possible effects through this attack:

Second, because the hacker pre-deducted part of the votes, the real voter may not be able to unlock the lock