A few days ago, Erik Finman, the youngest millionaire in the history of Bitcoin, posted a video on Twitter, saying "bitcoin is dead".

His main concern is that Lightning will turn Bitcoin into Visa and MasterCard (the US credit card giant) and hand it over to Silicon Valley, not to miners, all-nodes and ordinary users. 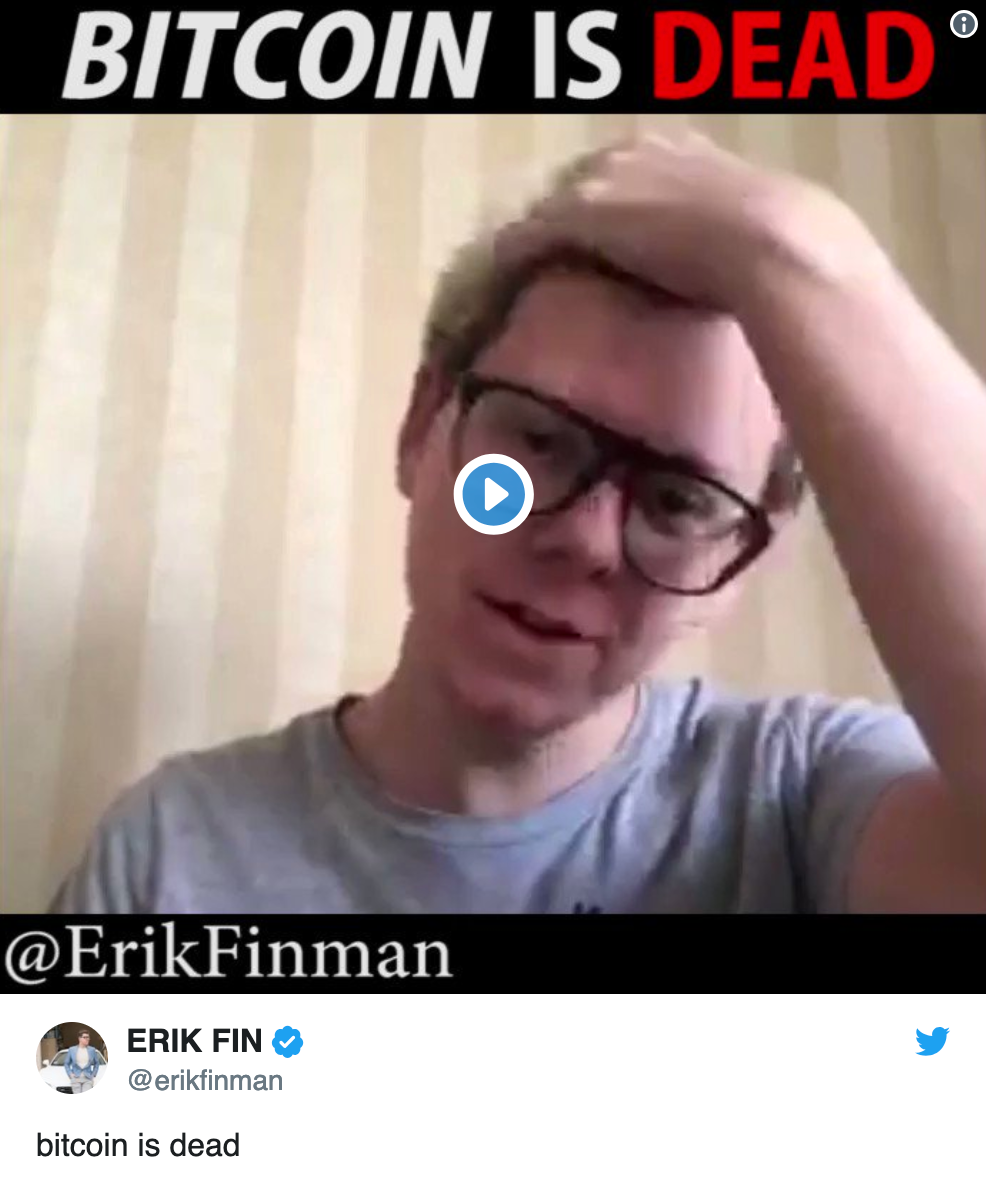 Except for Bitcoin itself, all other cryptocurrency related things will cause discussion. If there is support, there will be opposition. One of the main concerns in the argument against the lightning network is that "the lightning network will make Bitcoin lose its centralization."

So how important is decentralization, and even the lightning-free network does not have much "centralized" new technology that will be questioned enough to decentralize?

Supporters of Bitcoin, the traditional currency circle has a tonality: any project that is not decentralized than Bitcoin will be attacked in the name of centralization. The meaning of this sentence is that all cryptocurrencies can be "centralized" by Bitcoin supporters.

If you are on overseas forums and Twitter, you will be used to seeing what they are accustomed to:

If Bitcoin is the decentralized benchmark, then their claims are true.

The starting point of all cryptocurrencies has a "decentralization", which is also the first attraction of Bitcoin: Bitcoin does not belong to a person, a company, a country, it belongs to everyone who owns it.

It can be said that no one thinks that decentralization is not important, so why is decentralization important? Especially for newcomers who have not experienced the previous round of the bear market, it may not really understand why people in the currency circle are “decentralized”.

Let's talk about V God who started the business with a decentralized banner.

V God wrote in a relatively early article that decentralization has three advantages:

1. Fault tolerance: Decentralized systems are unlikely to stop working because of a local accidental failure because it relies on many components that work independently and is more fault tolerant.

These three features are actually well understood. For example, if you want to attack a financial institution, you can get the headquarters with a cannon, but attack Bitcoin? You need to buy computing power to bomb the bitcoin network, but the calculation of 51 attacks can also be done through hard forks, and the anti-attack is very high, which is why bitcoin is safe from zero to zero. The reason, because the cost of attacking Bitcoin is very high, this cost is not simply "money", but also includes the target of attack and the way of attack.

This is the understanding of V God, but it is a good description of why we need to decentralize.

So what's the problem with the centralized world? Take Buffett, who has been attacking Bitcoin all the time, to give an example.

Buffett called Bitcoin a "dream", "liar". Of course, this is nothing. He used to say that bitcoin is a "rat medicine".

Barry Silbert (DCG boss, introduced in the coin circle really big) back to the road:

"Buffet invested in Wells Fargo, which was fined 93 times for fraud and other abuses of power, and was fined a total of $14.8 billion since 2000. If bitcoin is a "swindler," I would rather use Bitcoin." con man"." 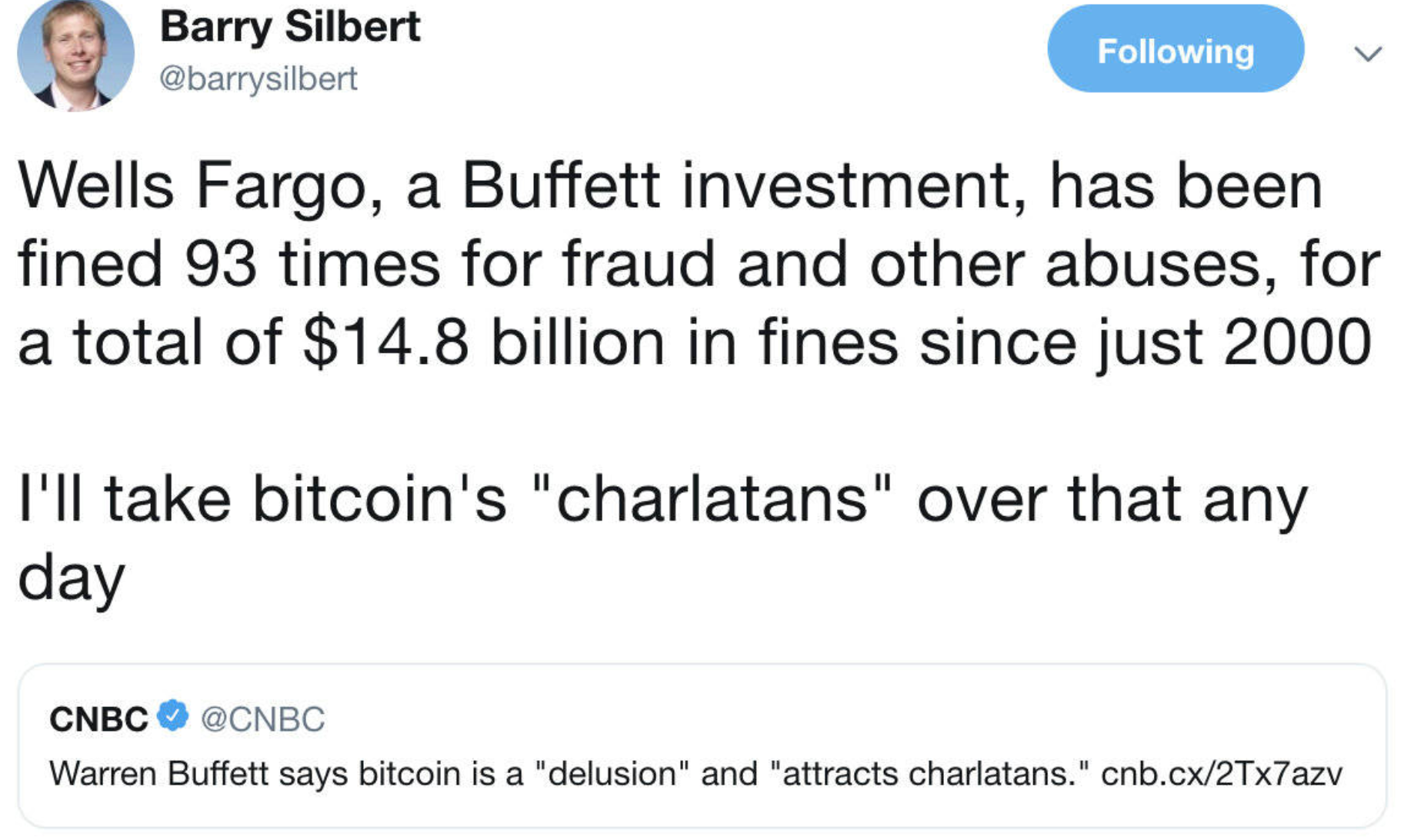 The biggest problem with a centralized financial institution is that if you have a problem, you have no way.

And the data proves that he always has problems. Even in the capital world, there has been a "convention" of the economic crisis for some time, because in the past 100 years of rapid development of capitalism, many economic crises have occurred. The most serious of these times seems to have happened in the capitalist base camp of this new era in the United States.

And is there a way to counter the crisis that will come out one day and soon after the constant super-currency and expanding debt brought about by “centralized financial institutions”?

Born in the most recent financial crisis, "decentralized" bitcoin is one of the best attempts.

In the Bible of the Encrypted World, the "Introduction" in the first section of the Bitcoin White Paper, it is easy to see what Nakamoto thinks. The first essential thing of an electronic money that should belong to this era is that "no need for any Tripartite agency":

In fact, it is what we said, decentralization.

With regard to decentralization, the understanding of Chang Yu (Babbit, the founder of the original chain) is:

“Decentralization means the degree of freedom for everyone to participate in the consensus. He has the power to participate and the power to quit. Under the premise of code open source and symmetrical information, the degree of freedom of participation and decision-making means fairness. It can be seen that decentralization is not a new word. He is actually the invisible hand of Adam Smith (author of The Wealth of Nations): free competition in the market."

But in fact, not everyone thinks that decentralization is very important. For example, Li Xiaolai wrote in the article: " About decentralization, most people still misunderstand: the so-called decentralization is not "destroying all". In the real world, this is actually the case: from "there is only a small number of large centers", slowly evolved into "a large number of smaller centers."

So is the “decentralization” that cryptocurrency supporters and practitioners hang on their lips every day?

I think it is still very important.

Imagine everyone working hard in a certain game rule. If someone can change the rules of the game and easily get the game props, how unfair is it?

But isn't this the world we are now? So why should we pursue decentralization, because the ordinary people in the centralized world are too weak, and the world should not be like this.

Guo Haibin: Joint operation is the core of the game, which is very practical for the relationship between the current exchange and the project side.

Review: the main opening average price of 6823 US dollars