Quote analysis: When you choose to operate frequently, stepping on the air has become a nail

Bitcoin ushered in an adjustment after breaking through a new high of $7,500 yesterday, and regained its warmth after a short break on the $6,800 front line.

Other mainstream currencies also followed the big brother's footsteps to carry out high-level shocks. After Ethereum rebounded to a new high, it also fell back to the 190-dollar line. The Litecoin grapefruits performed more similarly. After the retaliatory rebound, they rushed back and forth. Bitcoin cash was extremely strong and continued to surge. The meaning.

Q: Is it still empty?

Answer: Ask God in the short term, the long line has been slow.

Q: How do you make a profitable operation?

Answer: Set a vote, buy it in batches according to your own habits. If you have money, you can buy it. If you buy it, you will not see it. If you can't even make the simplest investment, it will be necessary to go to the air and lose money.

A lot of people complained: Wow, the bitcoin has gone up, and the bitcoin cash has skyrocketed and it has gone empty. Why don’t you tip it early and lose a lot of money!

If I can know in advance that bitcoin and bitcoin cash are so high, then I should sit down with Buffett now and eat steak at the world's top restaurants.

The difference between amaranth and trader is: the leeks can't hold hands, I want to watch the operation of the Stud God all the time, I am afraid of stepping on the air, fear of loss, all kinds of sun gain, floating profit is not only floating loss, but also long time to find myself fundamentally Did not make money. The trader also has a time to watch the disc, but the operator's watch is 100% energy and execution, and can make mechanized judgments when there is a change in the disc surface, without personal feelings.

Many people have a question: the trend of the past, why long-term coins will make money more than frequent short-term operations?

If you don't do short-term, you can't speed up compounding. If you do long-term, you can only make a big chance. Most people are not convinced if they can predict how much they can earn in advance and know their future outcomes. Others change 100,000 to 10 million, and my 20,000 can only change 200,000. There is no way to turn over.

This is the greed of human nature.

If a white person who has just entered the market can always be ten times as fast as a high-speed compound interest, then there is no poor person in this market.

I have said many times that the premise of doing high-success rate trading is that his mentality is stable and he can concentrate on his own strategy and not waver. Once greed crushes the senses, it will make frequent mistakes, consuming its own principal in the constant chasing and stopping losses until it is exhausted.

The fixed investment has solved this problem very well. The average price of the equivalent French currency is bought at intervals. If the market declines, the cost of opening the position can be lowered. If the market rises, it can avoid all the time. Although this process is not bought at the lowest point, but for the long-term target income several times, the short-term 10% or even 20% fluctuations have almost no essential difference, and stabilized their investment mentality.

High-speed trains with cryptocurrencies will not stop, they will only go further and further. Many people who wait and see are either empty or empty forever.

If you don't have short-term trading technology, then you will vote, cross the bulls and bears, and avoid various bullets. After crossing the Long March Road, you are the general. 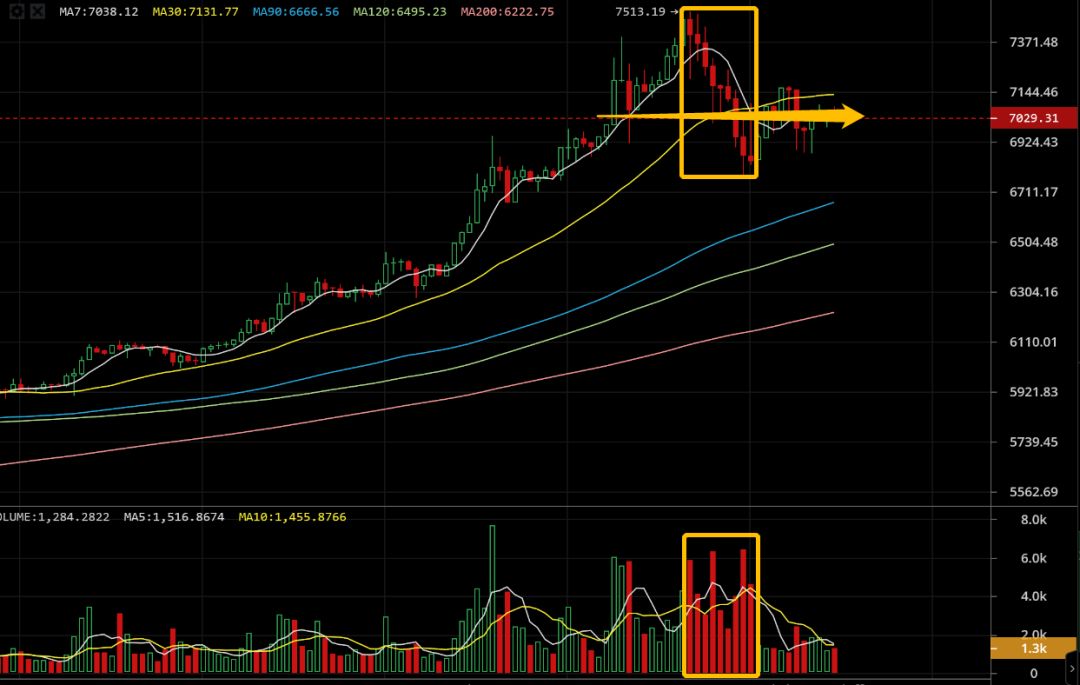 After the new high of 7,500 US dollars, the profit-taking plate and floating-funding cleaning were carried out, and at the same time, a large number of soldiers chasing high were eliminated, which reduced the weight of the car.

Judging from the current pull-up posture, the short-term apex is basically established at $7,500, but the bullish trend remains unchanged. In the case that the bullish trend does not change, there is still a chance to continue upward after the shock, but it is still not recommended to short, but should be bargain-hunting.

On the short-term: in the face of the loss of rationality, any technical suppression has completely failed. Now that it is a game of human nature, it depends on who beats the drums and runs fast. No one knows if he is a short-term pick-up man. Then guess, get off the bus and find that it has skyrocketed, get on the train again, get on the car and get off again. Repeatedly, there will always be a day of trouble.

On the long-term: Bitcoin has risen modestly and steadily, and the short-selling self-sufficiency fuel has pushed the price up, and the stagflation of the mainstream currency has also ushered in a later period. Everyone must patiently build a position in batches, waiting for the market to give us a huge reward.

The operating point of view remains the same: if you are afraid of stepping on the air, you can continue to vote, break up the positions you want to buy, buy a little every two or three days, continue to buy, and average the cost of opening a position. Both the emptying and the chasing are diluted, and the mentality is naturally good. 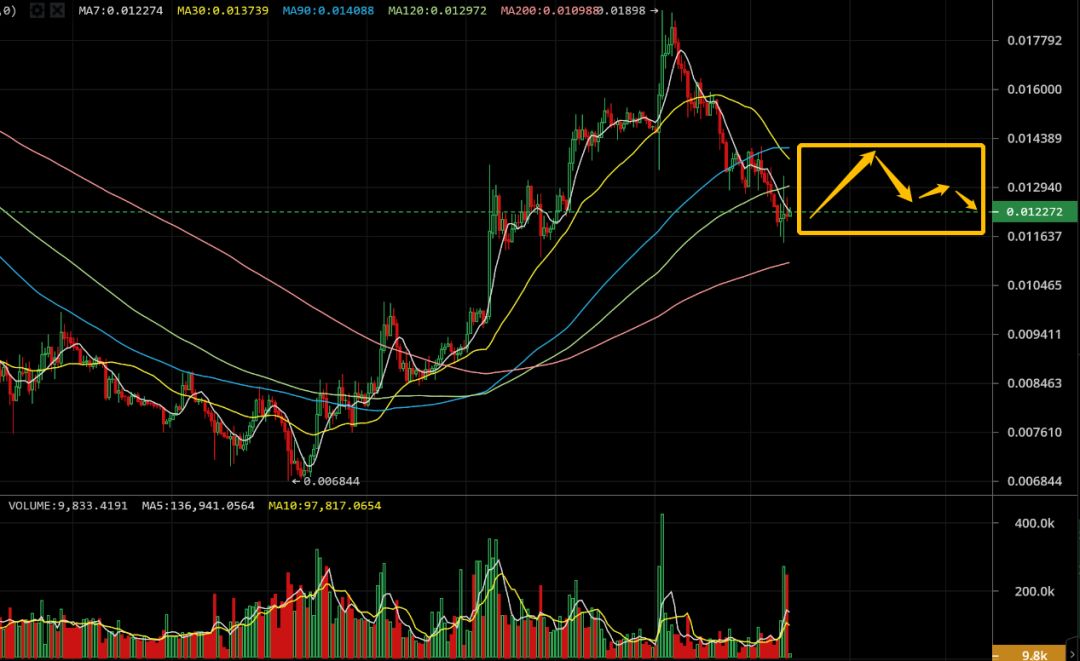 The LTC/BTC exchange rate continued to fall, and the first phase of adjustment was basically completed. The market outlook can expect a decent exchange rate rebound.

Wright was suppressed for a month and a half, and it was indeed oscillated for a while at a high level, and there is currently no inverted signal in Bitcoin. If bitcoin is stable at a high level, other major currencies will have a strong impact, so we should be cautiously bullish.

Everyone should pay attention to guessing that the market is only doing a short-term probability expectation , not as a basis for trading. Seeing the weekly K level, the V-shaped reversal pit will be filled sooner or later. After this wave of madness, the probability will still be a feather.

Litecoin is the veteran of the altcoin and has a strong consensus ecology. If you have a long-term belief in Litecoin, you can refer to Bitcoin's investment model and make a vote.

Milk has been for a long time, Zhou K graphics is very very beautiful, long-term bottom, the space is huge. The short-term ups and downs are really just a flaw in the way of price growth, even the waves are not. This year's bullish trend is still on the way.

The $190 has been stabilized, and the range of up and down $10 will create a lot of short-term trading opportunities. The concept is still to see more, do more on dips, rallies and lighten up, long-term positions remain unchanged. Leverage is reduced and your mind is stabilized.

Although the bulls are strong, they must also keep their positions to prevent a sharp drop and leave a long-term position. The market is ever-changing and anything can happen. We have made an Ethereum's rising expectations based on the long-term, but we must also do short-term fund management, and we can't open a large leveraged stud. When we let our list survive to Ethereum, we can witness our accumulation of wealth.

The current note of not taking notes: trend trading as long as the fixed investment pulls low cost, the lower the more you buy. In the long-term view, the 150-170 US dollars are not essentially different, because the front-end 240 US dollars and 450 US dollars two long-term target position profit space is huge, as long as the stable currency, the profit can be expected.

Yesterday, the high shocks consumed almost. Now the EOS/BTC exchange rate seems to have rebounded, but the strength is less than the Litecoin, and the willingness to fund is still not strong. Unless the news comes out of a good milk, it is still adjusting the market. For the time being, whether there will be a big Yang line to break the silence, and then make a position plan.

The high level shock continues for a while, and we complete the second pull of the premise a few days ago. If the technical side is stabilized, the follow-up has a new high foundation. Of course, the pits of the weekly K-level V-reversal should be filled sooner or later, and the hot money must be cashed out to give yourself a vaccination.

Grapefruit has a strong community influence, and the promotion of public chain technology will continue to push the price of coins up. The bull market idea is still a fixed vote, leaving a good position to prevent a sharp drop. One of the three major chains of the blockchain, if the community is not hot, the number of codes can be continuously updated, and perhaps beyond Ethereum is not a mouthful. 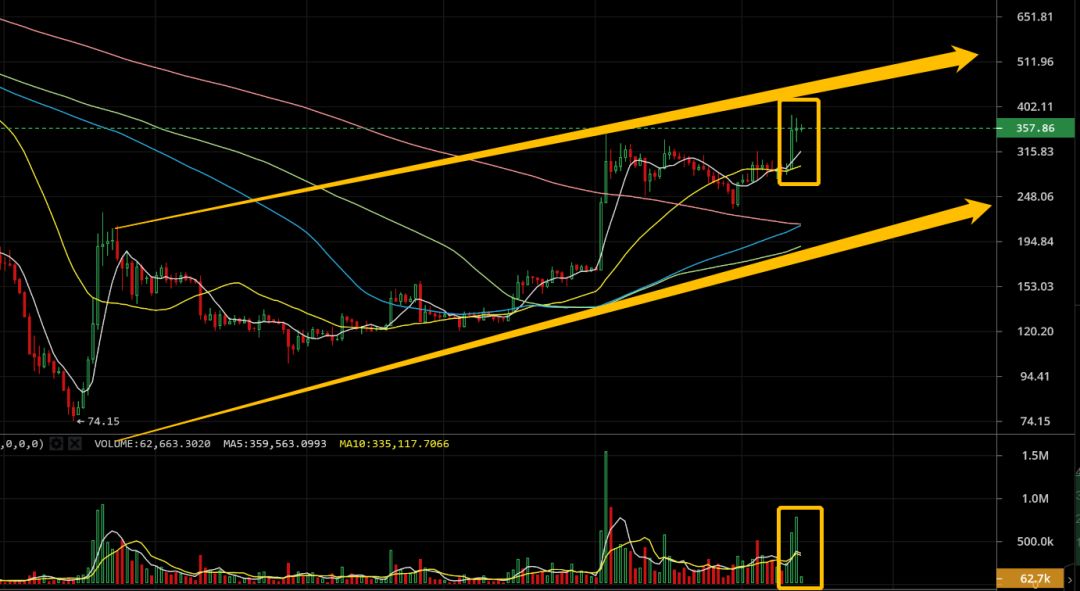 The impact of this big sun line and the bottom can establish the willingness of the main support. The early period of waiting for danger has come to an end, we can start to open the position.

The 360-dollar line is currently the effective pull-up position. This position consumes a large amount of time after a long period of time.

Bitcoin cash fluctuations are very large, so big that people think it is altcoin, and it is precisely the strong mainstream currency, so it is necessary to pay attention to position speculation, to avoid mental imbalance.

The double return of value and price will boost the long-term rise of Bitcoin cash.

0.29 US dollars to 0.33 US dollars continued to fluctuate, the range is very narrow, there is nothing to analyze, has been playing stand-alone games, it is really very boring.

Anyone who likes Ripple is waiting for it to pull up and see who can get longer.

When the market has no chips to cut, it may be a wave. You can buy a little bit, not too much.

As in the previous few days, the fluctuations in these days have been very clear: the BNB pattern is going bad, and the adjustment will continue. HT and OKB also completed the high profit-taking disk, and then the big probability is the shock adjustment market.