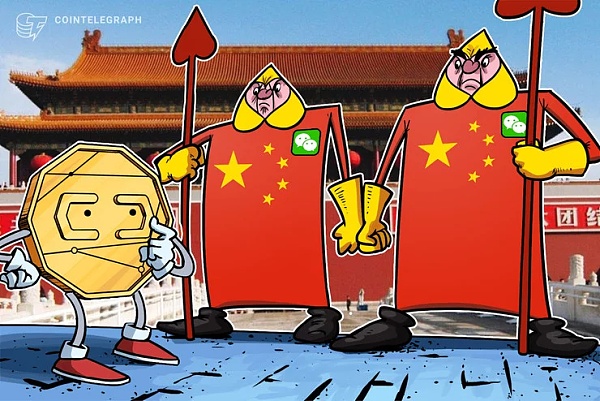 This tweet contains screenshots of policy changes, suggesting that users engaged in cryptocurrency transactions will be terminated using their WeChat accounts.

Dovey Wan is concerned that since most over-the-counter transactions occur on WeChat, "this may affect local currency liquidity to some extent." WeChat is a popular instant messaging and payment service provider in China, featuring the integration of small game apps.

The new regulations will take effect on May 31, stipulating that “merchants may not engage in illegal transactions such as virtual currency ” and may not issue tokens, sell pornographic works or gamble online.

Zhao Changpeng, founder and CEO of the large cryptocurrency exchange currency network, commented that he believes these restrictions are imposed on users by WeChat. In addition, Zhao also stressed that the new policy formulated by WeChat may bring many problems to cryptocurrency investors in the short term, but it is beneficial in the long run. He explained:

"This will cause inconvenience to the use of cryptocurrency traders in the short term, but in the long run, it is this restriction on freedom that will encourage people to use cryptocurrencies. This is not a bad thing."

Finally, he pointed out that without these restrictions, the user experience provided by WeChat payment services will be difficult to surpass.

According to reports, WeChat Pay has a daily transaction volume of more than 1 billion, and as of the end of last year, its total number of users reached 1.098 billion. According to tech news media TechNode, the app is also popular among the elderly, with 98.5% of Chinese users between the ages of 50 and 80 using WeChat.

As Cointelegraph reported last month, Guangzhou, the main city in China, has issued a business license for the use of blockchain and artificial intelligence technology.

At the end of January, it was reported that the main competitors of WeChat Pay, Alipay and WeChat Pay, required the crypto exchange FireNet to remove its payment service from its over-the-counter trading platform.

A YouTuber sentenced to 50 years in prison for kidnapping and blackmailing $ 100,000 for BTC ransom

Data: 62% of Turks are positive about the future use of cryptocurrencies