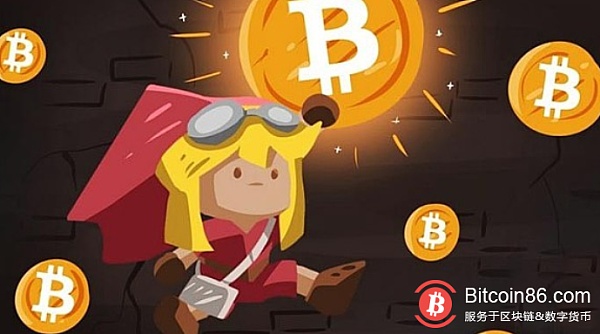 After a few days of rising, the cryptocurrency market has fallen sharply today. 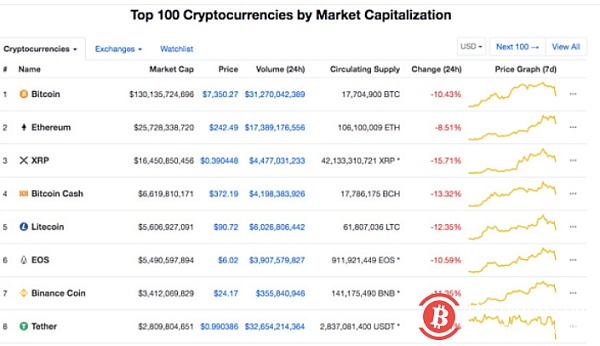 After falling below 10%, Bitcoin fell instantaneously, and Bitstamp once fell below $6,200. What is the market outlook?

Another rising token is Chainlink, and the reason for the rise in the token may be related to the news. Chainlink (LINK) CEO Sergey Nazarov announced that the ChainLink main network will be launched on May 31.
Digital currency fell, analysis is considered a normal callback

Why did the cryptocurrency suddenly fall today? Most of the analysis is considered a normal callback.

"Bitcoin has risen from 5000 to 8,000. This process has not been adjusted back. This kind of skyrocketing is a common situation at the beginning of the bear. The main reason for this BTC crash may still be affected by the news, just the highest in New York State. The court ordered Tether not to transfer money to Bitfinex within 90 days. In addition, Bitfinex and Tether executives and employees stopped lending the Tether reserve to Bitfinex. In the short term, the investment strategy is still to open positions on dips, and Bitcoin is expected to continue to create in the second quarter. The new high in the year." Digital currency brokerage 1Token analysts believe that this downturn belongs to the normal correction of the market.

OK Research senior researcher Li Lianxuan analyzed: "This is a normal callback in the market. See the chart below. We can see that the 14-day RSI line has been above 70 this week, indicating that the market is already overbought. Then the RSI line (pictured yellow) The deviation between the line and the price (the blue line in the picture) indicates that the market has reversed." 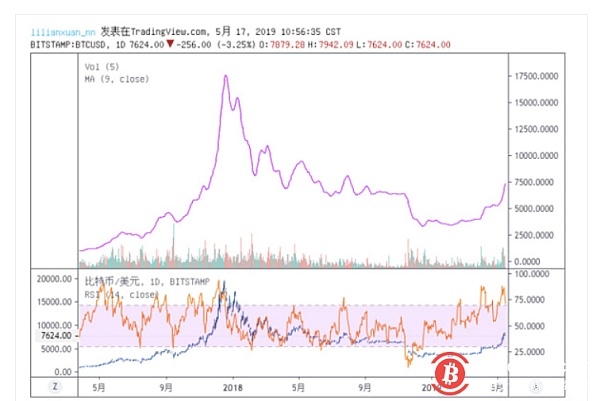 After falling below 10%, Bitcoin fell instantaneously, and Bitstamp once fell below $6,200. What is the market outlook?

The future analysts of the blockchain asset management platform also said that today's market decline is a normal correction. Previously, BTC pulled from more than 6,000 US dollars to 8,300 US dollars, there is a callback demand from the daily level; in addition, BTC faces strong resistance around 8500 US dollars, it is difficult to break the resistance level in the short term.

Token panda COO Shao Qiqi, a digital asset fund sales platform, believes that the market crash was mainly due to the early profit-taking and the re-establishment of the policy.

COO Linda of the small whale pool on the digital asset management platform also believes that today's decline is a normal correction after short-term overbought. "The top five XRP, LTC, the profit of some funds, and the short-term funds in the high-level panic. We do not think it is good to do the analysis, but also look at the volume and price indicators."

Is the bull market just a flash in the pan?

As for how the market will perform, Linda believes that there will be some shocks in the price in the short term, but the downtrend will not continue, so investors can open positions on dips.

Shao Yuqi also believes that prices will be in a volatile trend in the short term. "The contract is not recommended for long and short, there is no clear trend."

OK analysts believe that the next short-term trend of BTC needs to pay attention to the short-term long-short boundary line near 7870 US dollars. If the price falls below this price, the probability will probably test the range of 7100-7400 US dollars. The first time the currency price touches the range is expected to appear. Fall back.

"Of course, it can't be said that it is a flash in the pan. According to Dow Theory, the trend is going along a series of peaks and troughs. You can't say that the trend has reversed because the price has entered the trough."

"My point is that this round of rising trend is basically ending, and the future price will fluctuate at the price of 7000~8000 US dollars." He added. “When we can't see the short- and medium-term trend of the market, it is recommended not to enter the market, empty positions, and wait and see.” (Star Daily)