Half a year's increase of 150%! After the big rise, investors confessed to the inner entanglement

As of 12 o'clock on the 21st, after a small correction, Bitcoin prices are still strong, now reported at 7922 US dollars, compared with the end of last year, the stage bottom of 3155 US dollars, an increase of 150%.

The long-lost surge has caused Bitcoin's global market capitalization to return to $140 billion again. On social media, discussions about "Whether Bitcoin can get on the bus? When will the bull market open? When will it crash?"

At present, "fixed investment" and "speculation band" are the two main means for investors to fight in the financial market. Old player Yang Ming (a pseudonym), although he is bullish on Bitcoin for a long time, still hopes to get more benefits from short-term fluctuations. However, the recent short-term decline of more than 16% of the market gave him a lesson.

Investor Yu Jianye (a pseudonym) has developed a “fixed investment plan” with lower risk. Three months ago, he released the plan on a wealth management software, and the overall return has exceeded 80%. Ironically, he did not strictly implement the plan. "I always hope to make more money through 'high throws and low sucks', but unfortunately it is counterproductive."

Although the earnings were not as good as expected, Yang Ming and Yu Jianye agreed that the most important thing for investment is risk control.

Investors tangled after the big rise

On May 17, Bitcoin hit a market high of 10 months three days ago, and the highest daily decline of 14.2% (AICoin data) once again caused the market to panic.

On the well-known old cryptocurrency exchange Bitstamp, BTC's decline was very exaggerated, falling from $7,940 to $6,652 in half an hour, plummeting to 17%.

The news that Bitcoin fell sharply was quickly posted on the day's Weibo hot search. On the public opinion field, the outside world is still questioning Bitcoin. Wang Zhian, a well-known media person, wrote that “bitcoin is a casino and has no intrinsic value”. As of now, the tweet has nearly 1,000 comments, and the number of people who like it is over 600.

Among the discussants, there are many "outsiders". They believe that investing in bitcoin belongs to the first-time visitors who enter the market after harvesting. Whether to make money or not is only related to the order of admission. Other factors are just representations.

From the historical trend of Bitcoin, this statement seems to be not unreasonable.

From the time node, the sooner the player enters, the highest theoretical gain. However, Wang Chao (pseudonym), who has four years of experience in the currency market, told Honeycomb Finance that early investors in Bitcoin had a high probability of not having a high return.

"For so many years, I have been telling people around me that buying Bitcoin can make a lot of money, at least it is recommended that there are hundreds of people buying coins, but in fact, there are few who stick to it. There are many people every time they go back or skyrocket. Was 'washed out'."

Today, Bitcoin has risen from $5,300 in early May and set a stage high of $8,343. Even the recent currency-losing incident in the currency has failed to pull it down. Compared to the phased bottom of $3,155 at the end of last year, Bitcoin has soared 150% so far.

However, according to the current price of BTC 7922 US dollars, there is still a 60% drop from the historical high of 20,000 US dollars. The investors who entered the last round of bull market, if they get it now, will definitely lose money.

It can be seen that the profit of the speculative coin does not necessarily mean “first come and then come”, but it is especially important to grasp the timing of admission. So, after this round of big rise, is the bull market coming?

Recently, BitMEX CEO Arthur gave an answer in an interview with the media. "Bitcoin has rapidly rebounded from last week's decline to $8,000. This is a sign that the market is currently on the rise. The bull market is real." In the middle, Arthur has publicly predicted that Bitcoin will reach $50,000 in the next two to five years.

At present, "fixed investment" and "speculation band" are the two main means for investors to fight in the financial market. Some investors have made it difficult. In the end, is the short-term operation pursue continuous profit, or is it now starting to build Bitcoin, waiting for the bull market to arrive?

For the "new high" after the bitcoin price continues to rise or continue to fall, Wang Chao said frankly. In October last year, he chose to clear the price at the price of Bitcoin around $7,000. Now he is missing this wave and he is entangled in whether to re-buy.

The short-term "coin" is most afraid of taking the time

Unlike Wang Chao's entanglement, since the beginning of the year, Yang Ming has replaced some of his savings with Bitcoin and started his "band" career. “Although I’m bullish for a long time, I still hope to get more coins from short-term fluctuations.”

As a veteran player with a financial background, he believes that “holding the currency” is the best investment method for most people. "The masters say that the coins are not sold, and in theory they should indeed be squatting, but it is difficult to hold back in practice."

Yang Ming said: "After the Bitcoin hit an all-time high of $1,300 in early 2017, how many people know that the unprecedented bull market is still behind?"

For a long time, the large fluctuations in the price of coins have left the impression that Bitcoin has left on the currency. In response to this feature, Yang Ming believes that band trading is an effective way to invest in Bitcoin. “Although it is not the most profitable way, flexible investment can effectively avoid market risks, preserve capital strength and cultivate a sense of disk.” 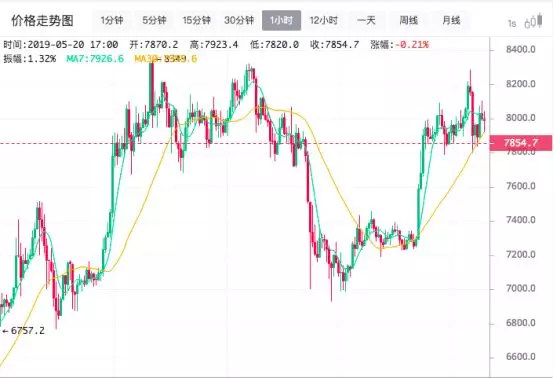 To put it simply, the so-called band operation is to buy high-selling and low-buy in each round of the market to earn more bitcoin. "But it is not easy to grasp in practice."

In February of this year, when Bitcoin rose nearly $4,000 from a low of $3,400, Yang Ming chose to sell some of the bitcoin and used the contract for "hedging." The deal increased the amount of money in his hands by about 4%.

“Hedging” is simply referred to as “hedging”. When a trader buys (or sells) the actual goods, he sells (or buys) the same amount of futures on the futures exchange to preserve the value. For example, Yang Ming, if there is a BTC in the spot, he will sell 1 BTC in the contract. If the price of the coin falls, the currency in his hand will increase.

This does not mean that nothing is wrong, "the biggest risk of speculation and hedging transactions is going on."

In May of this year, he opened a contract hedging when Bitcoin broke through $7,000. Later, the price of the currency broke through 8,000 US dollars. Yang Ming chose to close the hedging. However, bitcoin fell below 8,000 dollars again. In this way, Yang Ming calculated the account and found that the coin in his hand was nearly 10%.

In this regard, he said that the band trading is a kind of "dancing with Zhuang" behavior, the risk is very high, not suitable for small white investors, "a little careless, the currency will be less and less."

In Yu Jianye's mind, the most important thing for investment is not the rate of return, but the risk control. At the end of 2017, he entered the currency circle, and since the beginning of the year, he has developed a set of “fixed investment plans” with lower risks.

His cautiousness stems from the experience of buying Bitcoin for the first time. "At the end of November, when I bought Bitcoin, I earned it. I had good luck and good income. So I continued to increase my position and I played with chicken blood every day. The money comes too easily. As a result, the price of the currency is lost in one day, and the income is directly cleared."

Later, Yu Jianye understood that it is possible to use time to smooth out short-term fluctuations in the currency price and thus obtain long-term gains. After a year of frequent trading, there was no revenue, and he quickly thought of setting up mainstream currencies such as BTC, ETH, and EOS, and “closed eyes” positions.

Three months ago, he released his own fixed investment plan on a financial software, and the overall return has exceeded 80%. “The average amount of money is divided into 50 shares and bought every 10 days.” As of now, more than 50 people have joined the program.

Ironically, it is still difficult for him to strictly enforce this fixed investment plan. "Every time the price of the currency has risen, I want to sell it first, and then pick it up at a low price. I hope to buy more coins through 'high throwing and low sucking', but unfortunately it is counterproductive."

Since the beginning of this year, his return on investment in bitcoin is around 30%, which is not far from the return on fixed investment. Now that Yu Jianye intends to return to his plan, "the operation is useless."

However, the premise of a fixed vote is that you believe in bitcoin. "You have long been optimistic about the mainstream currency such as Bitcoin and Ethereum. If you have decided to invest in the altcoin from the beginning of last year, you may not be able to return to the day of retirement." Yu Jianye said.

He admits that the timing of the fixed vote is very important. "If I started to invest in Bitcoin in 2018, then my position cost will gradually decrease, but I may not be able to make money until now; if you start to vote from the beginning of this year, Although the cost of holdings is gradually increasing, bitcoin has risen and the overall profit is good. Therefore, the timing of the fixed investment is very important."

"In fact, everyone can specify their own fixed investment plan, either weekly or monthly. But first you have to decide when to start voting. Finally, it is to stop the bag for security." Yu Jianye said Before the profit, the so-called rate of return is nothing but book wealth. ”

At present, Yu Jianye has a book profit of about 30%, but he does not intend to leave the market. "There will continue to be fixed investment. In the long run, there is still room for growth in Bitcoin."

For the frying band, Yu Jianye has a heart, "short-term operation, too professional, and play does not turn."

This article comes from the public number: Honeycomb Finance News

Jameson Lopp: From the time of work and rest, Oban is not likely to be Nakamoto.

Yang Zhen, member of the Standing Committee of the National People's Congress: electronic archives should use techniques such as blockchain to ensure the authenticity of information