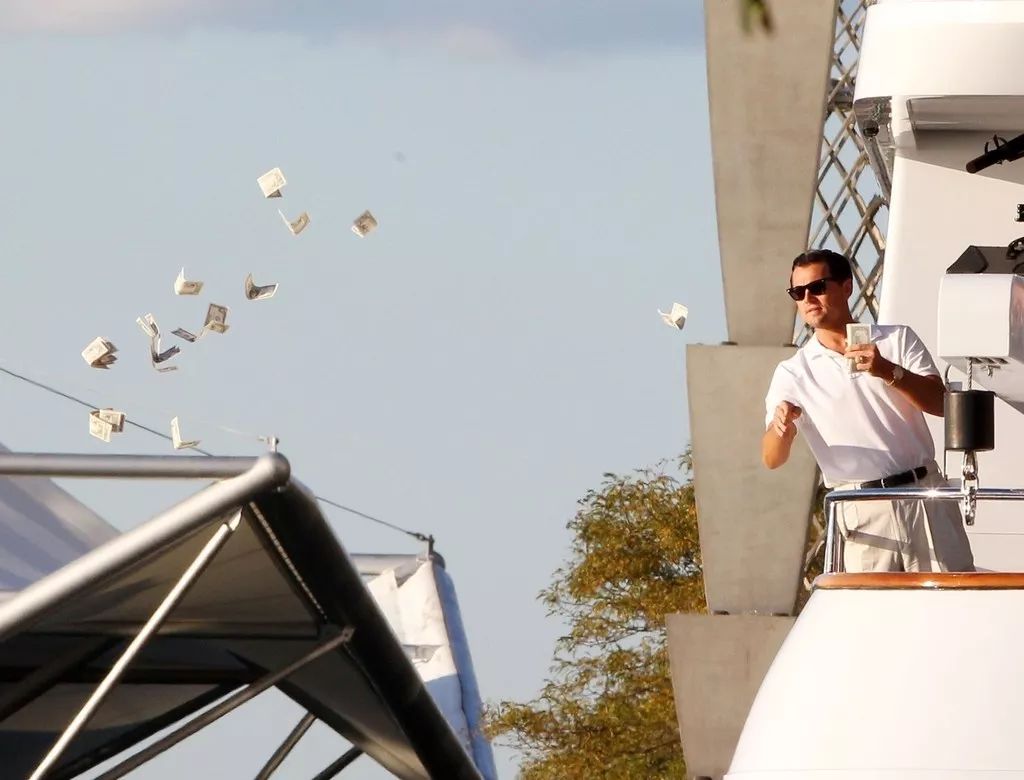 Recently, Bitcoin has not only surged in price, but also has strong institutional momentum. 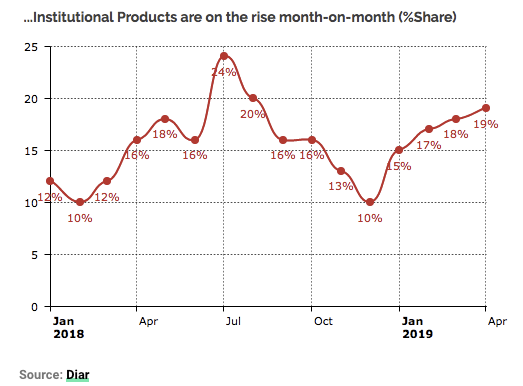 It has been said that institutional funds have been in the market for a long time. Today, we take the Bitcoin Trust Fund (GBTC) as an example to look at the changes in institutional investors' demand for bitcoin from a data perspective.

The Grayscale Bitcoin Trust Fund (GBTC) is a $1.4 billion closed-end fund that invests in Bitcoin, so it can be used as an important indicator of judging agency entry.

GBTC allows investors to invest in Bitcoin through traditional investment instruments such as stocks. Grayscale's bitcoin is hosted by the cold wallet provider Xapo and then charged a 2% fee.

This is a lucrative industry. According to Block estimates, in the past three years, Grayscale has received a management fee income of 52 million from the GBTC fund; $14.9 million in 2017 and $27.3 million in 2018. 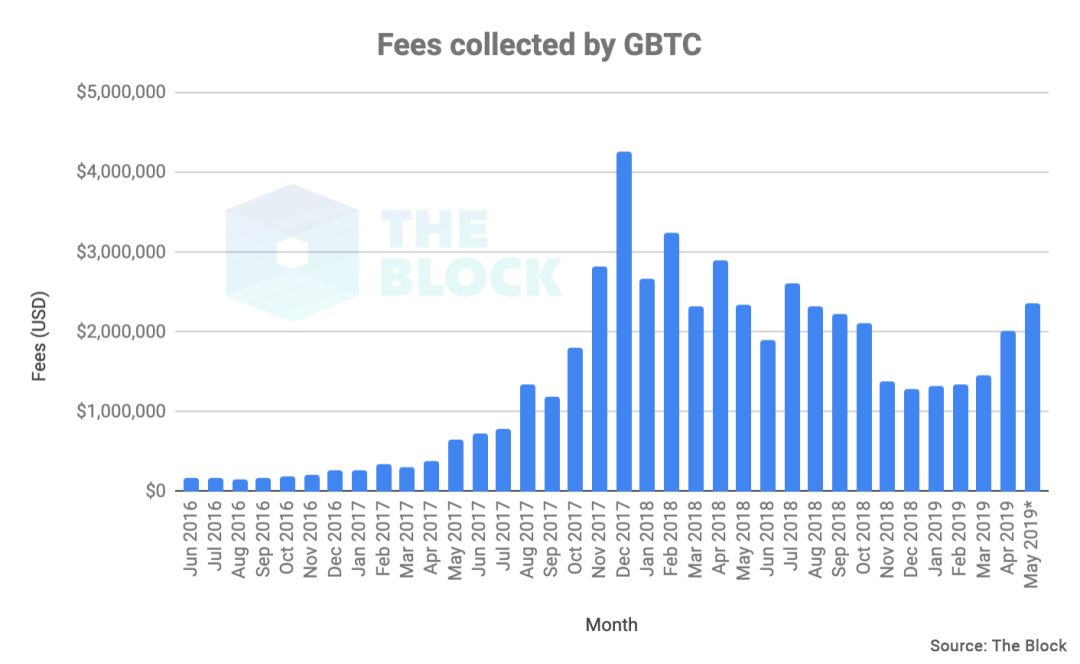 As can be seen from the chart below, Bitcoin prices have increased by 135% since December 15 last year, jumping to the highest point in nine months. Since the beginning of February, the price of GBTC has risen by 124% and reached its highest point in eight months on Friday. 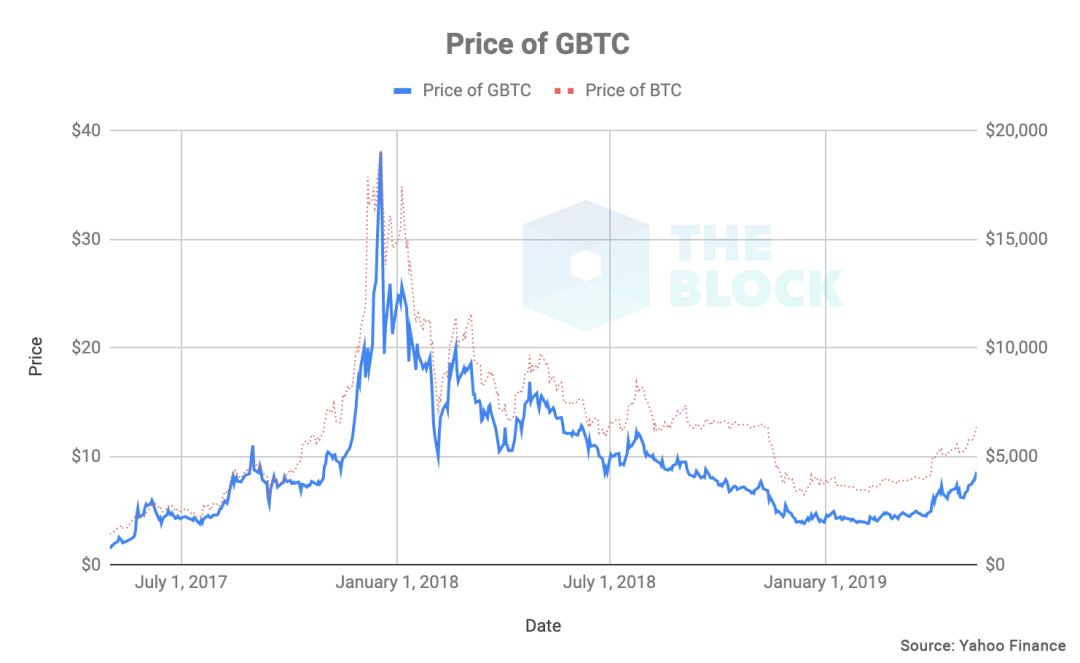 Last Friday, the asset size (AUM) under the management of GBTC, the value of all bitcoins in the fund, reached $1.42 billion, the highest point in 10 months. As of the end of April, Grayscale held 225,638 bitcoins, equivalent to 1.3% of the total circulating supply of Bitcoin. In April of this year, the market share of bitcoin managed by the GBTC fund reached the highest level in history. Bitcoin inflows, or the proportion of Bitcoin in GBTC holdings, reached an all-time high in April, indicating an increase in institutional demand. In fact, the bitcoin inflow in April (11,236 bitcoins) is equivalent to the sum of the inflows in the previous four months.

If we put bitcoin inflows in dollars, Grayscale's bitcoin holdings in April increased by nearly $58.2 million, which was almost $60.8 million during the peak bull market in December 2017. 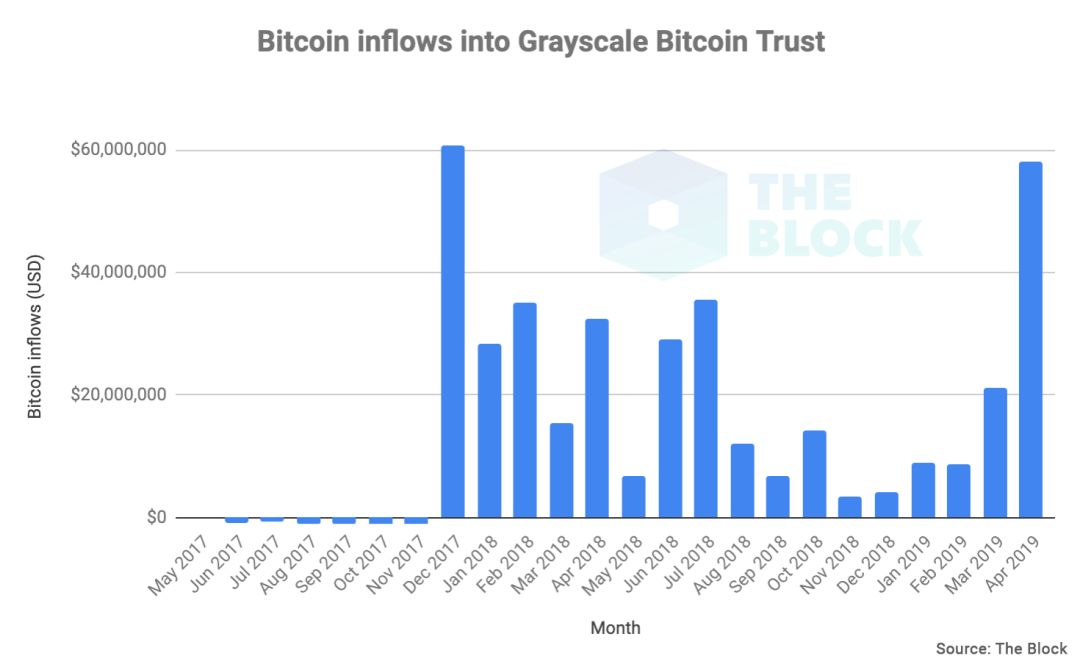 Another interesting indicator is the relationship between GBTC's stock price and net asset value (NAV). 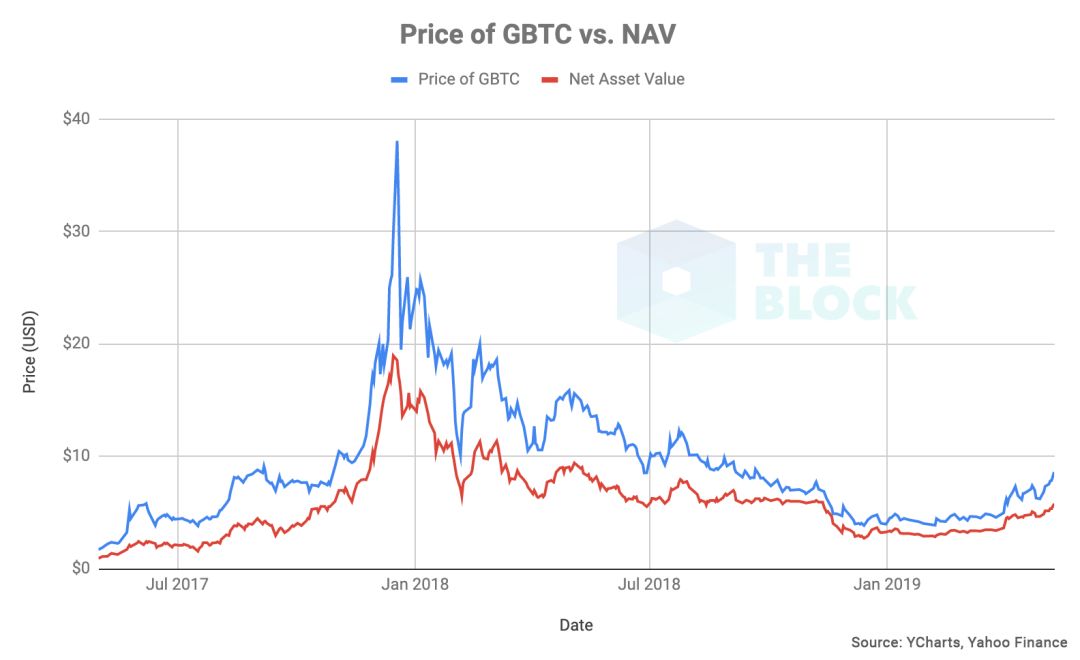 The share price of GBTC is higher than the net asset value (NAV), which means that investors are willing to pay a higher price to invest in this fund than to buy bitcoin directly. This is because the price of GBTC is determined by supply and demand, and most investors prefer to hold a kind of securities instead of “physical” bitcoin. 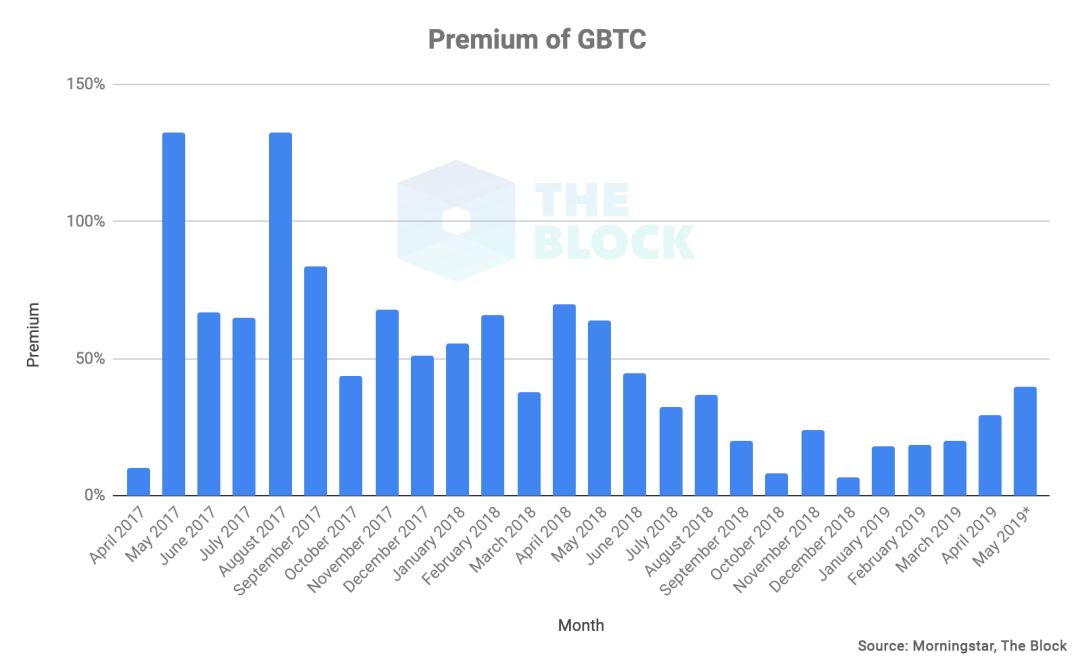 The rise in the share price of GBTC means an increase in demand for GBTC fund shares, which also means that institutional investors are increasingly interested. Historically, the premiums for May and August 2017 have exceeded 100%. The current premium is close to 40% and has been rising since December last year. This shows the transformation of the market environment.

A similar trend can be seen from the monthly trading volume of GBTC. Although the volume of transactions in May is still much lower than in early 2018, it has shown a clear upward trend in recent months.

By analyzing the GBTC data, it can be seen that this trend has reversed in the past few months. The fund currently holds 1.3% of the total circulating supply of Bitcoin and hit a record high of 11,236 bitcoins in April.

If bitcoin inflows are adjusted to US dollars, bitcoin was added in April to nearly $58.2 million, close to the $60.8 million added in the peak of the bull market in December 2017. In addition, with the increase in institutional demand, GBTC's share price premium has also increased in the past seven months. The same trend has occurred in the volume of transactions, and the volume of transactions has begun to increase.

Putting this question alone, why are investors willing to pay such a high premium?

On the one hand, GBTC allows traditional institutional investors to use their most familiar traditional investment tools (ie stocks) to understand bitcoin price movements and make investment decisions. In other words, investors don't have to understand the process of buying Bitcoins, and they don't have to worry about how to securely store and manage their private keys.

In addition, some individual retirement accounts (IRAs) and some broker accounts can also hold shares in GBTC, which is equivalent to opening up some institutional investment scenarios. Therefore, it is justified that investors are willing to pay such a high premium compared to the spot price of Bitcoin.