According to Reuters, the US Securities and Exchange Commission (SEC) issued guidelines on Wednesday to help market participants determine whether digital assets qualify for securities under the federal securities laws and require registration with regulatory agencies. The US Securities and Exchange Commission has strengthened regulations related to the initial issuance of digital assets and digital currencies. To help determine whether a digital asset is a security, the SEC said it and the federal court are studying whether the asset has any of the characteristics of an "investment contract." The prospect of a digital currency is likely to be the main cause of this surge.

Today's market is fluctuating and faltering. Is it futures? I don't think so. This is a normal cleaning and floating float action in the face of a sharp rise in the market. The market's trading volume has not shrunk, indicating that the market's ability to undertake is strong enough, and the bears will not come out to suppress morale for the time being. Such as the rainbow's long, the enthusiasm of the currency market was completely ignited by the BTC's one with the big Yang line, which is very hot, will not turn off in a short time, according to informed sources, this time the rise of Wall Street. I still remind everyone that it is a rotating market. If the mainstream currency is once again rapidly rising, in the case of insufficient capital, it will definitely form a siphon effect on the small currency. I am optimistic about whether the target in my hand is the fund. The main direction of the attack to avoid only earning money does not make money.

Yesterday, the BTC rose to a maximum of $5,277, but we saw that the macd indicator in the one-hour time-sharing chart showed multiple deviations. After the two deviations, the price of the currency began to change from up to down, and then it may be shocked and repaired. Deviation of the indicator, waiting for the 5 antennas to move up, the support below is around 4,800 US dollars, the average line is long, the gold crosses above the zero axis of the macd indicator, the kdj indicator has signs of a dead fork, the indicator indicates that the deviation is also a turbulent trend The price of the coin broke through the boll's online track and remained above the upper rail. The strong features were obvious. The previous view was maintained. After the shock, it continued to bullish to $5,900. It is still ready for both hands. We take half of this big Yangxian line. As the exit point, the break will leave. 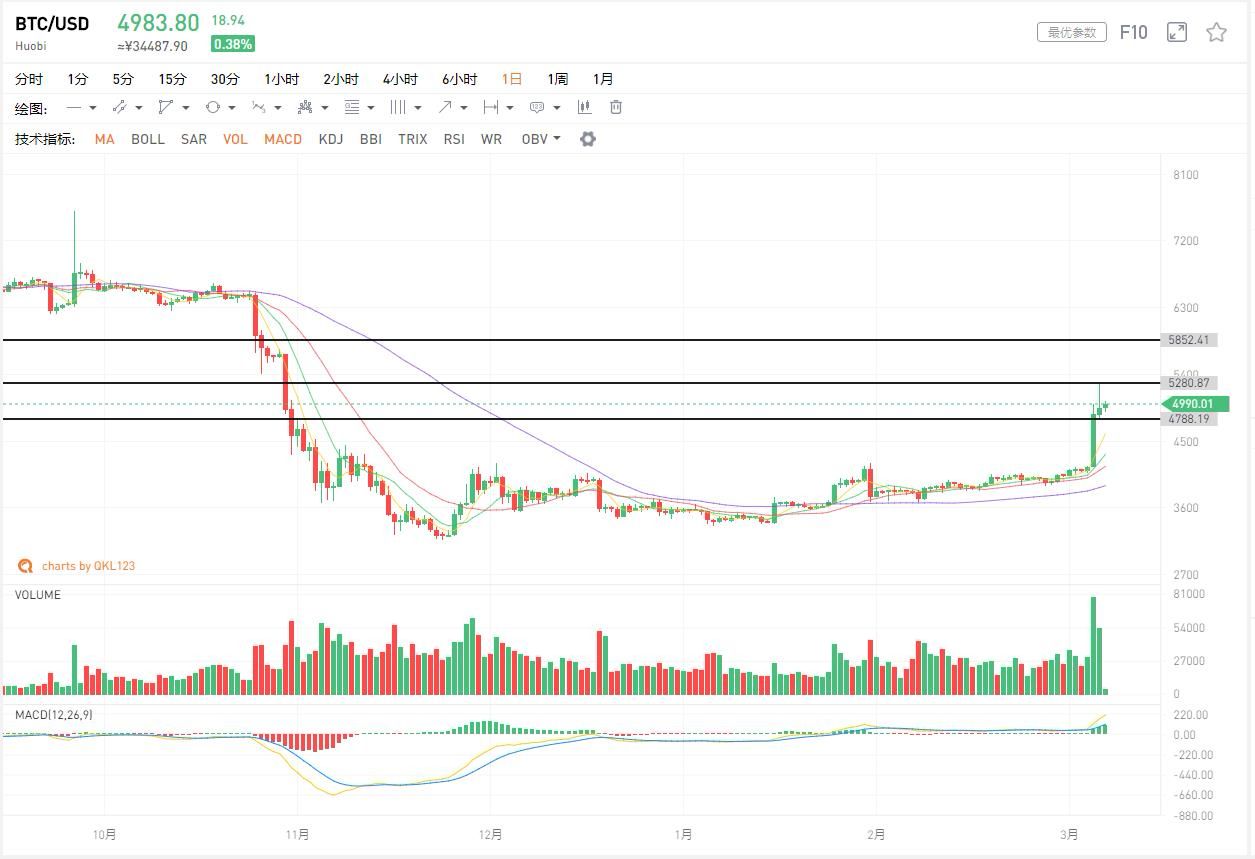 Under such a strong market atmosphere, ETH still failed to break the pressure level of 166-170 US dollars, but we saw that the trading volume is very large. Although the start of this target is relatively lagging, it may not be a leading product, but it may not be a leading product. According to the principle of quantity in the first price, breaking through this range should also be a matter of recent days. Pay attention to the observation that the breakthrough failure may return to the important support level of US$127, and it will leave if it falls below. 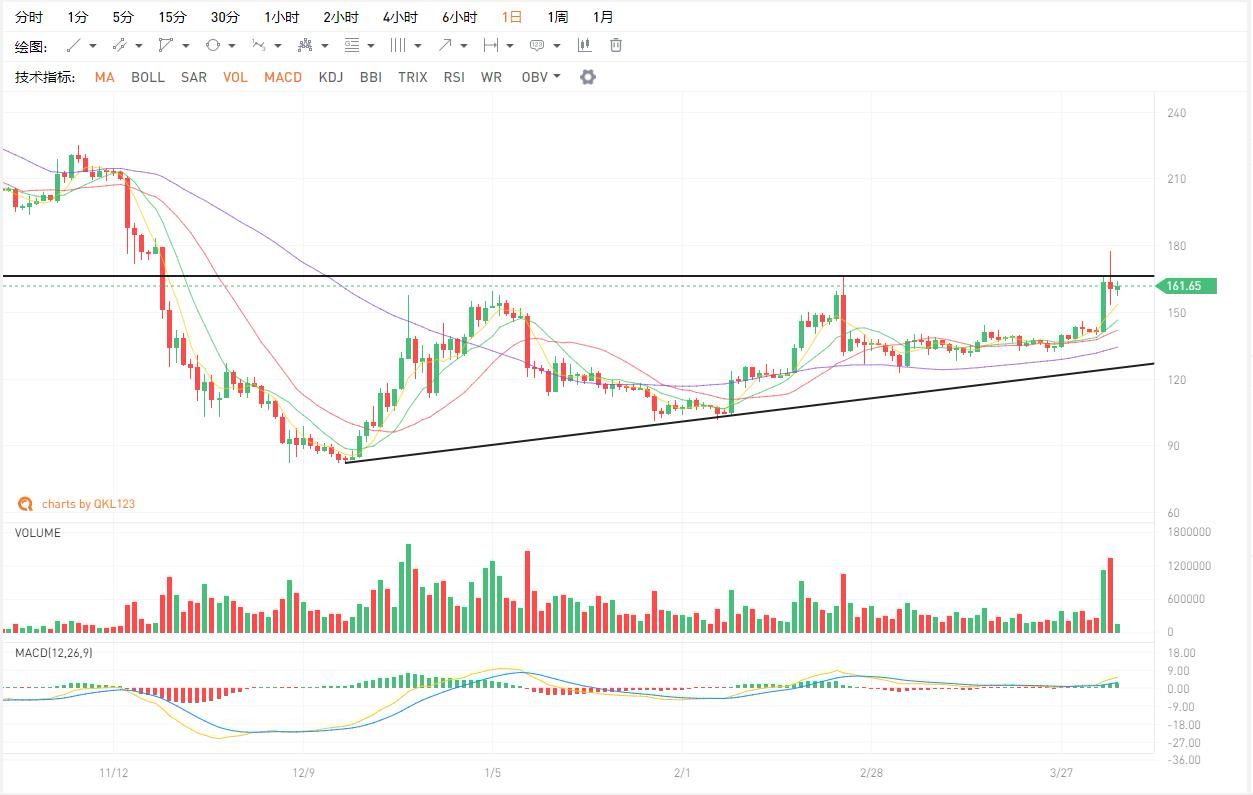 The trend of XRP is a bit similar to ETH, and it has not been able to form a breakthrough. There was a heavy shock yesterday. I think it is a good thing to have a heavy shock at the bottom. This can scare away the unsettled small scattered. We still prefer the target. A breakthrough is made up, and it may be very fast. It is expected to be tomorrow or the day after tomorrow (welcome to face), the macd indicator will return to the zero axis, and the golden fork will diverge upwards, the moving average will diverge upward, the trend will be upward, and the defense will be broken. 0.3 dollars left the market to wait and see. 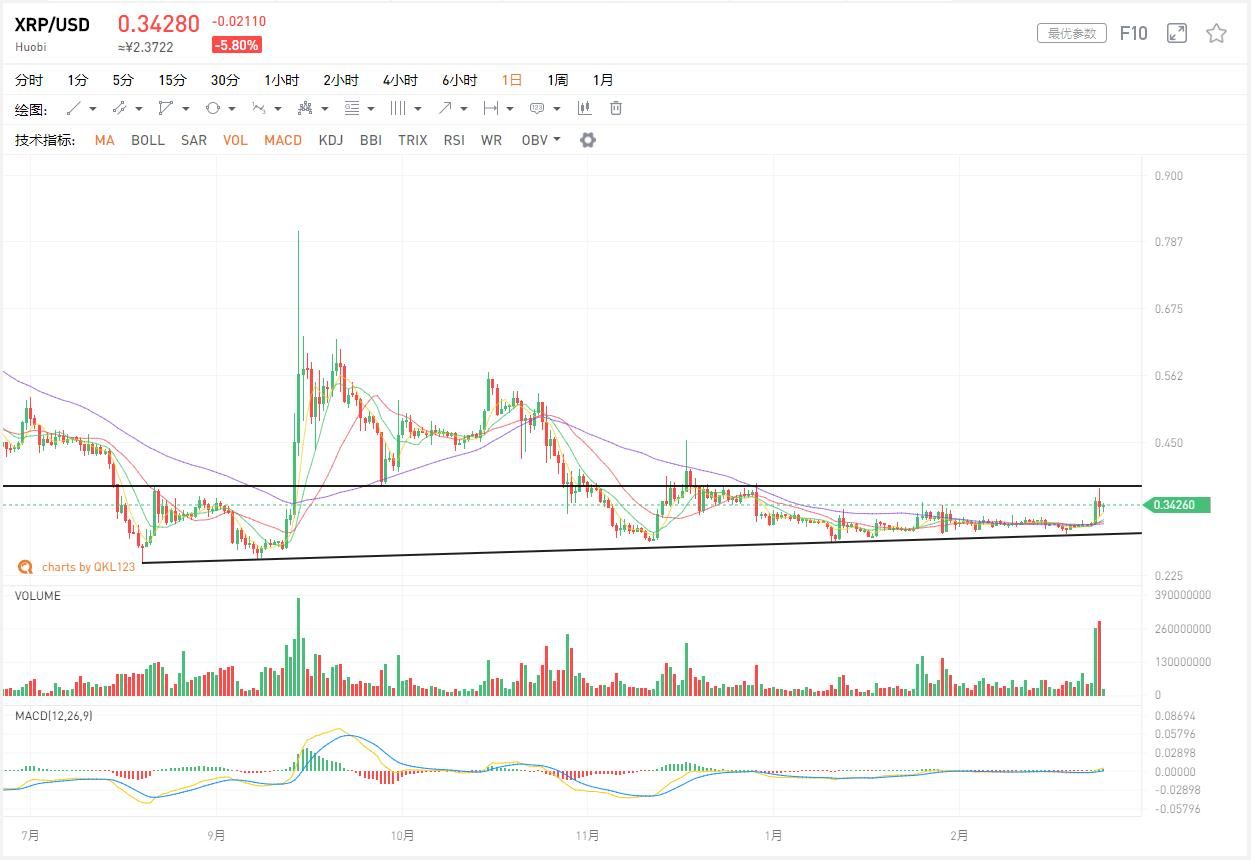 The BCH market value ranking has risen to the fourth place. The position of the fourth child is quite robbed by many people. Relying on the amazing increase in recent days, the target is popular in the whole market. It is good to have a big gold master father. The point of view, its next target is at $410, the space is large enough, and currently faces the pressure of $310. The pressure point will cause shocks, but in the end it will pass the pressure point, and the volume below will be large enough. I think The pressure point before $410 is a paper tiger. There is no need to panic. The support below is below $226. The probability of breaking below the support point is very low. At this point, pay attention to low suction. 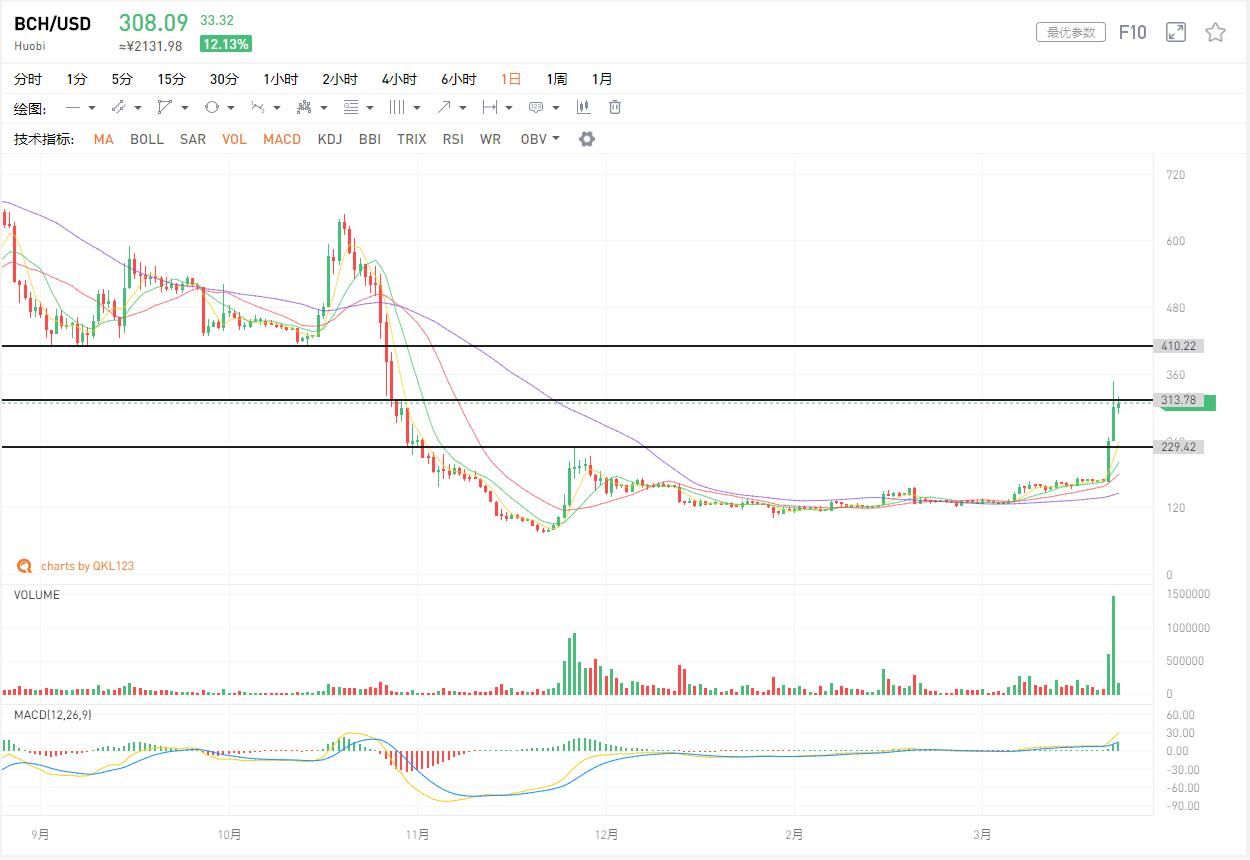 LTC is currently under pressure of $90, with support under pressure. The target's support is around $75, and the pressure is around $90. It is expected to fluctuate for a few days around $75-90, effectively falling below $75. Staying on the sidelines, breaking through $90 continues to bullish to $110. 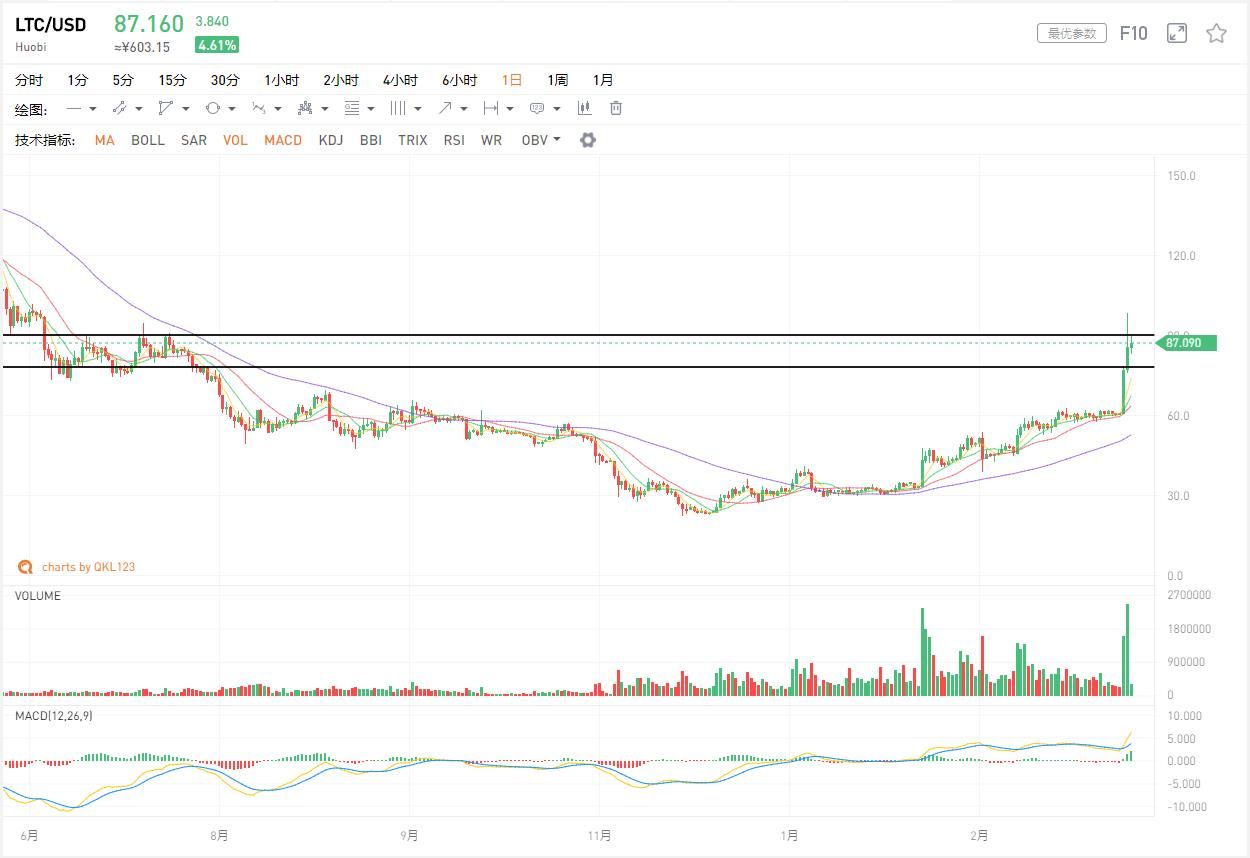 EOS maintains yesterday's point of view. Yesterday we mentioned that the target may fluctuate upwards. The pressure on the left side is relatively high and the rhythm is not too fast. The pressure above is around 5.8 USD and the support is at 5 USD. We expect it to be In the range of $5-5.8, after a period of shock, in the direction of selection, if you break below $5, you need to lighten up the position, and you may return to the important support level of $4.4. 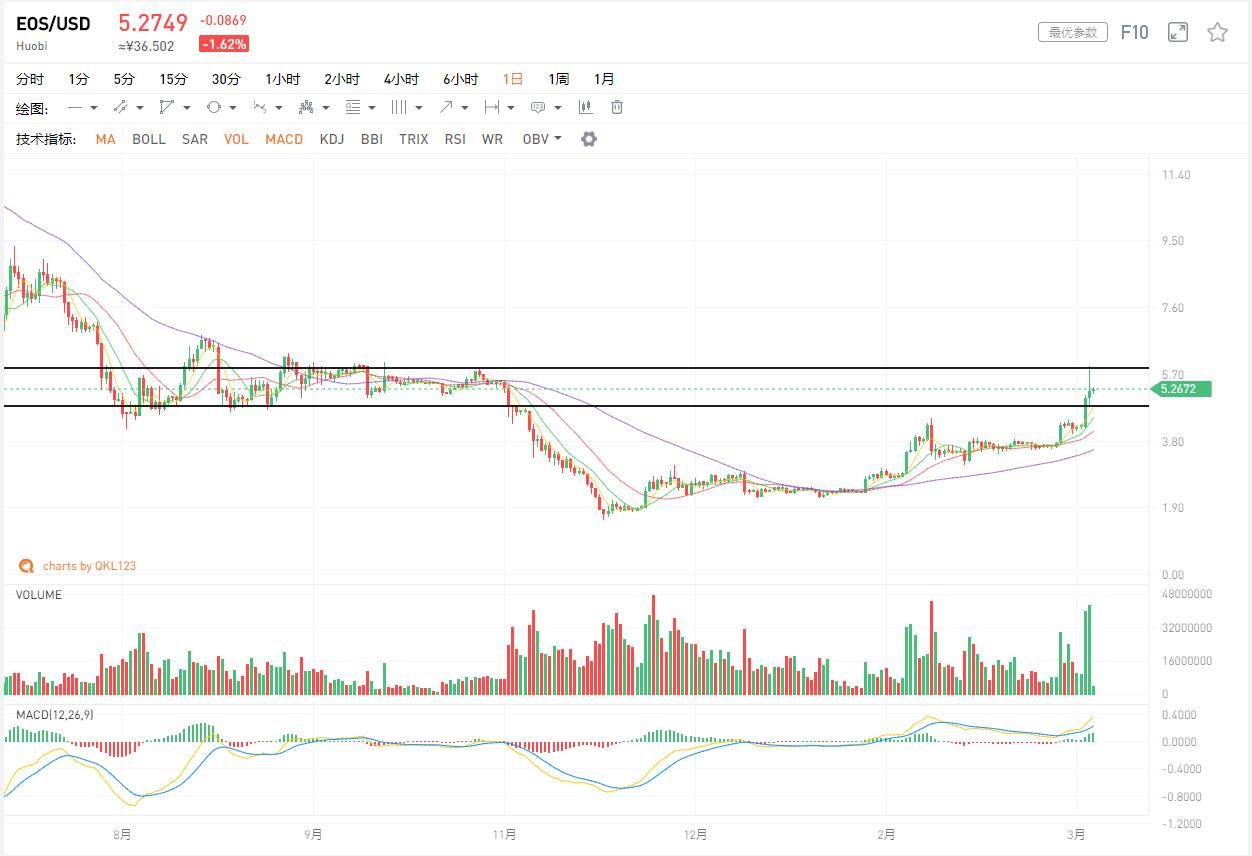 Earlier we mentioned that TRX has constructed a large head and shoulders. At present, the right shoulder has been basically completed. Yesterday, trying to break the neckline has not been successful, but we believe that the breakthrough is a matter of time, marketing genius like Sun Boss. How can I miss such a feast, the macd indicator reaches a strong area above the zero axis, the moving average system diverges upwards, and the volume is effectively enlarged. After breaking through the neckline, it can actively do more, set a stop loss, effectively fall below $0.022. Departure. 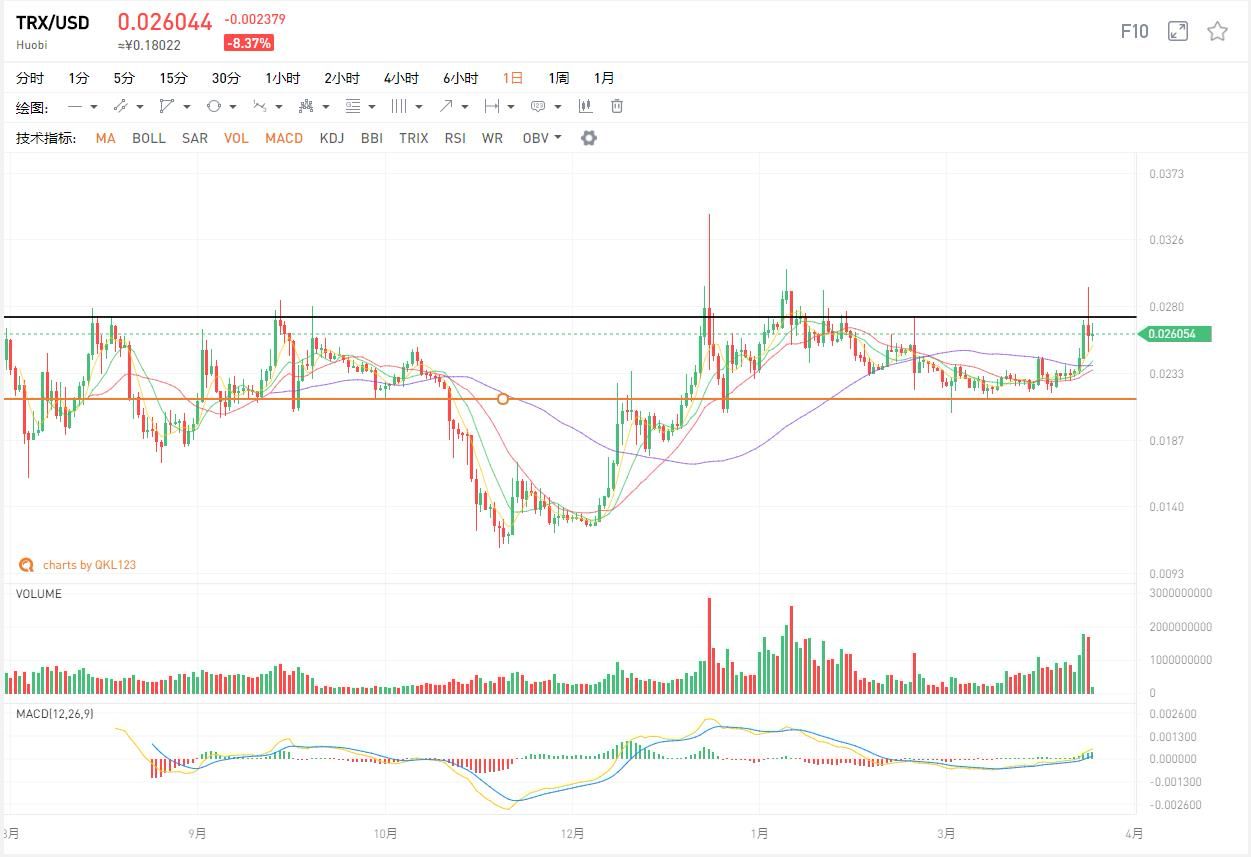 The limelight of the platform currency has been taken away by the mainstream varieties, but why should we pay attention to the trend of the platform currency, because the trend of the platform currency indicates that this wave is a bull market or a rebound, we see that the leading BN is already near the new high, assuming HT also oscillated sideways around the new high. When BTC rested, they broke through the new high and then pulled up. Did you say that the bull market will come? But without breaking through, but going down, there is no such thing as a bull market. The market is just a rebound. Don’t expect it. Today, HT follows the market volatility. It has not yet fallen below 5 antennas, or 5 antennas as the target. The signal of strength and weakness, once again fell below 5 antennas to lighten up the position, effectively fell below 2.4 US dollars, pay attention to leaving the market, has not yet exceeded the pressure of 2.8 US dollars, effectively break through the 2.8 US dollar rising space to open, top trend is not optimistic, 5 antenna head down, may fall further, and pay attention to the second target (in mid-April) listing performance of the hot money preferred channel.