Looking back at the pull-up process of Bitcoin since April, we can clearly see that before the two pull-up points on April 2 and May 3, the trend of BTC is a horizontal arrangement of a small series of small k lines, and the center of gravity In the gradual improvement and the pull-up day, the breakthrough in the resistance zone was completed. It is worth noting that after April, there was some bearishness in the market, and bitcoin showed a relatively large drop, and mystery buying once again put the bitcoin price up. Previously it was the Bitfinex event and the currency piracy event, the most recent being the 5000 sell orders on the Bitstamp exchange. Although the recent slump is much larger than in the past, we must also consider the current high prices, and some long-term forces themselves have profit-taking requirements. If we push according to common sense, the market panic caused by such a decline on May 17 can completely lower the price, and after a slight rebound, there will be a second drop, often creating new lows. But the fact is that on May 19, a big Yangxian line will return the bitcoin price back to 8000. Such buying power is by no means a consistent act of several ordinary investors, so as many commentators have said, institutions are entering the market. 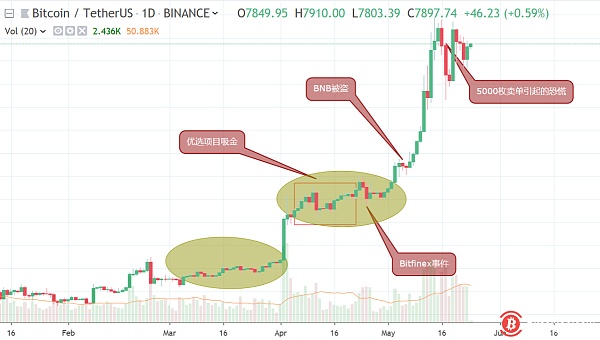 Yesterday's early release was very panic, but the gradual pull back at night indicated that the support under 7500 is still very strong. Yesterday, I was unable to fall out of the double head, so today I am going to the triangle. As for the price that will break through the triangle, the probability of an upward breakthrough is greater in probability. But the world is unpredictable, please wait patiently for the market direction. In operation, it has maintained its usual practice. The 20-day line is the line of glory, leaving the line offline and holding it online.

Ethereum had a good news yesterday. Grayscale launched an Ethereum Trust and was approved by the US Financial Supervisory Authority for an off-market public offer.

In general, for over-the-counter trading instruments, investors often only hold the notes of the company that issued the product rather than the physical assets behind the real holding of the notes. In this case, the credit risk faced by investors is only for the trust company that issues the product and avoids the theft of digital currency transactions and the credit risk of the exchange. For many individuals or organizations that want to enter the cryptocurrency market, this is a good opportunity to test the water currency market. Through the trust product, investors can better discover the intrinsic value of the cryptocurrency and obtain possible income. This product may be an important over-product for attracting more investors into the currency market in the future.

From the price point of view, ETH did not appear a big change, the overall is still fluctuating with the fluctuation of BTC. In 4 hours, it fell below the lower edge of the wedge-shaped finishing interval and was temporarily short-selling in the short term.

In terms of platform coins, BNB has become the most powerful of the entire mainstream currency after hitting a record high. In the last two trading days, the upper impulse has been attenuated. When the BNB temporarily took a break, HT also began a round of gains. From the daily line, through the two consecutive days of rising, the current price is very close to the previous high of 3.11, if you can effectively break through this high point, there will be opportunities to enter. (CoinNess)

When Veil, which had been invested by Sequoia and other institutions, was out of service, did DeFi encounter the first Waterloo?