The Blockchain Explorer API is available for queries to check the validity of the transaction. However, in the blockchain world, uncertainty calculations such as API requests or random number generation are not possible. In fact, if two nodes calculate different versions of "reality", the blockchain will fork, so I have to find a solution.

Oraclize can execute API requests from smart contracts. I will explain how their services work, but for now, you should remember that they provide a reliable way to extract data from the outside world. With this great technology in my pocket, I have built a functional proof of concept Dapp that allows you to exchange Ethereum with Bitcoin and Stellar Lumens you find on Etherswaps.co. But before that, I will give you an overview of how Bitcoin works.

As you can see, the exchange of tokens on a distributed exchange is performed in 3 easy steps:

In theory, as long as the verification data is public, one can even use the system to exchange fiat money with Ether or any other ERC20 token. Although it can't be considered completely safe, it shouldn't be used in production, it should only be used on the test web, but it does have some interesting features.

We will create an offer in the smart contract and pay it to Bitcoin for exchange of Ethereum.

Go to http://etherswaps.co and connect to Dapp using Metamask. Then add my local blockchain instance as a custom RPC at http://blockchain.etherswaps.co. You can also use Ropsten Testnet, but at this point the verification is much slower.

If you use my blockchain instance, import one of the following private keys, which already has 100 ethers stored, but use them as they are;)

Continue to create a quote and enter the desired bitcoin address, bitcoin amount (Satoshi) and quoted E-dollar amount (Wei). The label will automatically display the latest price. Use this bitcoin address 1mfjvqrgryfvngsqjvt3xcahdwmcwairyq and define to lock 2 Ethereum for 0.08876 BTC.

Therefore, you should type the following:

The MetaMask page will pop up and you can confirm the details of the transaction.

It's important to mention that you should only use the "new" bitcoin address without any prior transactions, otherwise the malicious party may send the wrong transaction hash and apply for your Ethereum for free! Fortunately, if the address has received any previous transactions (currently disabled for testing), the site will automatically check for and throw an error.

Next, we send 0.007 BTC to the address and submit a transaction Hash to declare the Ethereum. Fortunately, I have done it, you can see that the transaction here just sent 0.007 BTC to our address.

Go to the market page and select the quote you just created. Ideally, you should be redirected and the correct quote should be highlighted. When you click on it, a mode will pop up with more details, allowing you to enter a trading hash of the Bitcoin transaction.

Then use MetaMask to confirm the transaction. In the background, the transaction of the underlying smart contract is sent. It uses Oraclize to execute an API request to check if the transaction has sent the corresponding amount to the relevant bitcoin address. If this is the case, the Smart Contract will pay the deposited Ethereum to your Ethereum address. After approximately 30 seconds, you will receive a notification indicating that the amount has been paid.

Building an Etherswaps Distributed Exchange: I used the following techniques:

Let me take a deeper look at how smart contracts work, how Dapp interacts with them, and what security vulnerabilities exist.

Let me show you a simplified version of the smart contract that doesn't have any security mechanisms to give you a good idea of ​​how it works. You can find the complete contract code here. As I mentioned, it has not been fully audited and should not be used for production in any way. 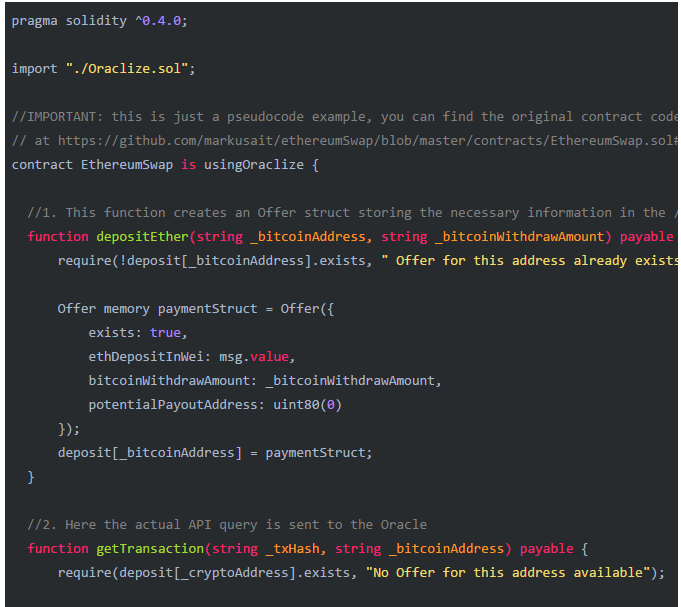 With this concept, you can integrate any other currency as long as you have a trusted public API to find the transaction. To fully understand the last part and how to integrate other currencies, we need to understand how Oraclize runs in the background. 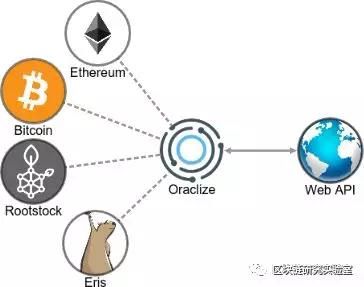 Essentially, Oraclize runs a node that monitors a special smart contract that receives queries for API requests. When another smart contract invokes a particular function using an API query, the Oraclize node notices it and executes the API request. Create a proof of authenticity, then they call the __callback function in the smart contract and pass the result of the API request as input to it. You can test your Oraclize queris on this site in advance.

All in all, Oraclize provides a reliable and reliable way to extract data from the outside world.

Some words about React and Web3

I am used to React to build client-side Front-end and Express for the backend. Using the JavaScript Web3 library, the front end can interact with the contract, allowing users to use Metamask and receive notifications when the transaction is complete. For testing, I recommend using Ganache's web3 provider. I also strongly recommend that you always check that you are using the correct version of Web3. There are some major changes in the 1.0 release, and using the wrong version can lead to some very strange bugs.

All in all, Web3 is a fairly new library, and relying solely on it to display smart contract data is still not very intuitive and simple at this point. Therefore, I use MongoDB with the Express API to store the data provided locally.

While this makes it more focused and leaves a security hole, it can still be easily replaced with a decentralized IPFS file storage system.

Of course, centralized data storage is not the only security hole. In addition to the common problems of double-spending attacks, smart contract vulnerabilities may also occur because the contract has not been fully audited. However, I would like to point out three security aspects.

This allows all users to create multiple items with the same address.

Finally, another important aspect is that the Block Explorer data may be inaccurate or the server may be down. Although the server that is not available is not a problem, because the transaction hash can be committed later, there is still a lot of trust in the Block Explorer service, which leads me to the previous topic:

As with any financial service, you still need to trust when interacting with it. In fact, anyone who uses Ether Exchange must trust the following four aspects:

As you can see, this decentralized exchange is not immune to trust. People still have to trust different parties. However, it effectively reduces middleman and transaction costs while providing a simple and inexpensive way to exchange tokens on the blockchain. Smart contracts are verified asynchronously, and they are more fragmented than any major exchange or even other decentralized exchanges.

Bitcoin has finally returned to $8,000, but why is it not recommended to chase?