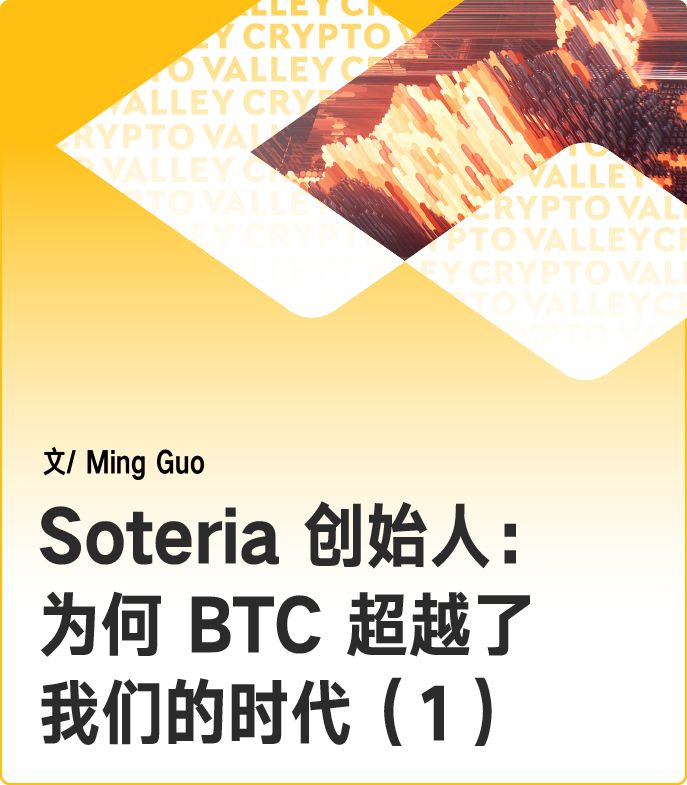 The author of this article, Ming Guo, is the co-founder of the blockchain star project Soteria.

Soteria was initiated by three technical experts with extensive experience in distributed networks, trusted programs and cloud operating systems. It built UTXO-DAG under the framework of Nakamoto's consensus, implemented system expansion, applied Mimble-Wimble protocol for privacy protection and tailored books; in addition, it extended UTXO to support smart contracts in formal languages. The project integrates a variety of cutting-edge results and is committed to building infrastructure for a self-sustaining decentralized economy.

The original title of the article is "Bitcoin is Alien Technology and it's not meant for our time" (BTC is an alien technology, but not suitable for our time). This article is compiled exclusively by Encrypted Valley and will be published in three phases. This is the first one.

Ten years ago, BTC founder Satoshi Nakamoto embedded a message in the creation block: "The Times 03/Jan/2009 Chancellor on brink of second bailout for banks" (January 3, 2009, the Chancellor of the Exchequer On the verge of implementing the second round of bank emergency assistance.)

This message is concise, and it is full of hope afterwards. It appears on the surface only for the Great Depression caused by the financial crisis, and actually points to the end of the centralized system that has existed since the birth of human civilization.

On the 10th anniversary of the birth of BTC, we don't need to explain the way the technology works to discuss this topic, because you already have the entire Internet. Since its inception, BTC has attracted more and more enthusiastic and loyal followers. In the past few years, the BTC has reached the point where no one knows, no one knows, so that when aliens come to Earth, it may not be able to avoid being bombarded by BTC-related news.

When I first came into contact with BTC, I didn't know how to use it. BTC is both a "substance" and an idea, but it is a very unique idea, unlike anything we have known before. BTC is like a thing that has something outside the world, a higher dimension, and a lot of "morphology." This is my feeling for many years.

Among all the "forms" of the BTC concept, what I like most is "distributed", "anti-censorship" and "no-confidence consensus"; of course, some people will say that the latter two are the natural result of the former.

"Distributed" is a concept that has not been fully explored. This concept is very subtle and feels like a zero-dimensional "meta-concept". It seems that most people can "understand" it naturally, to explain things, and not to be explained.

There is a new world hidden behind it. Moreover, this may really be our future.

But first, let's go back to the BTC.

Since the creation of the BTC, it has gradually gained fame and has received widespread attention. People want to replicate a great, sacred idea, so we have witnessed the first digital asset boom.

Whether it is good or bad, BTC, like Helen in Troy, dispatched 1,000 ships. In the end, digital assets brought some happiness and many tears.

In 2013, the price of BTC rose by a factor of 100, and then began to experience a chain collapse.

In 2017, we experienced the second wave of digital assets driven by Ethereum. In 2018, the price of BTC soared from $2,000 to $20,000, and prices rose tenfold in the short term. In this speculative boom, many types of digital assets have emerged, but in less than a year, the value has plummeted, falling by as much as 90% or more.

In the spring of 2019, the total market capitalization of all digital assets (where BTC accounted for a large share) was only about a quarter of the market value of large technology companies such as Apple or Microsoft. As the market cools, people's minds begin to calm down.

Now, it's time for us to think more, instead of sitting on an emotional roller coaster to chase the endless “FOMO” (Fear of Missing Out, fear of missing opportunities, a typical pathology of speculative addiction).

In thinking about the two major trajectories of BTC – prosperity and depression, we have to notice an obvious dualism: distributed moral education VS. Fallen speculative addiction. It is this wonderful dualism that makes BTC a potential forging world or the power to smash it.

In order to build a new world, we need both good and bad. The struggle between them drives human progress.

As of now, BTC has existed for 10 years. It is time to conduct a realistic test of this phenomenon. What have we learned? Maybe this question is too broad. But obviously, every digital asset that has been designed (even the one that is terrible) deserves to be studied as a case.

How did BTC change us? The answer to this question may be instructive on how to shape the future.

Since the birth of BTC, two people have flocked to it: idealists and pragmatists. There is of course a third faction: people who support both camps, which may include BTC creator Nakamoto.

Idealists are more concerned with the possible social impact of BTC: distributed, anti-censorship, no-confidence consensus, and often as an effective tool, hoping to compete with financial institutions with far-reaching influence.

Pragmatists believe that BTC is a new business opportunity and tool that can simplify and solve many difficult business problems. In fact, as described by Nakamoto, many of these problems are caused by financial institutions, which have triggered financial crises.

Nakamoto said in the famous BTC white paper that the obvious use case of BTC is as a simple and inexpensive payment system. However, these three factions used BTC as a speculative tool and eventually pushed it to the mainstream.

Since the collapse of the digital asset market in 2018, many have turned to the idealist camp, that is, BTC should be a revolutionary tool, a near-rebel progressive tool, rather than a selfish tool designed by speculators for short-term gains. . I used to have this feeling.

But now, after I realized how strange and multidimensional the BTC idea was, my thoughts changed.

What BTC has brought to us over the past 10 years is a bigger, more diverse world, projected in our turbulent world. We should be humble and seriously learn everything BTC and other digital assets bring to us.

I began to realize that “less ethical” use of BTC and other digital assets, such as long-term holdings for profit mining or purely for speculative purposes (known in the industry as HODL), is in a completely different economic framework. Forecasting and reflection are the blending of the decentralized economy and the current centralized economic system that have not yet been realized.

This prediction reflects the shortcomings of our world, not the world represented by the BTC.

In other words, BTC is a foreign technology that is not suitable for our time.

From another perspective, if the BTC is an alien experiment that began 10 years ago, what is wrong now?

The problem is compatibility, not out of control speculation.

People like to compare BTC to the Internet and treat BTC as the next Internet. This seems to be the root cause of BTC and digital assets being abused in many places.

Just as Internet innovation revolves around the “upgrade” of existing business models, people copy this model into BTC and other digital assets, hoping to achieve rational speculation.

Speculative activities that were out of control in the second digital asset boom were not driven by BTC but by ETH. It can use smart contracts to make the flow of other digital assets as simple as clicking a button, just as a web browser can make online business more viable than earlier Internet products such as email.

In general, this statement is true. In other words, ETH and all other existing digital assets (except a few private ones) are in principle not fundamentally different from BTC.

So far, we have hardly seen any convincing evidence that BTC or any other digital asset is really being used in our current economy. Some BTC use cases do exist and are growing rapidly, such as cheaper international remittances. But what have the digital assets achieved in the massive revolution of the past 10 years compared to the rise of Internet companies?

Many people may point out that today you can pay for coffee and beer with BTC in many parts of the world. However, even in the field of digital payments, BTC is not worth mentioning compared to payment instruments in the era of WeChat payment and Alipay.

Although WeChat Payment and Alipay are a single system that is extremely concentrated, it does radically change people's payment habits at the social level.

Other use cases are also very suspicious. Many people try to use blockchain technology in existing business areas such as healthcare, supply chain and e-commerce, but the support principle is rather weak. When the blockchain technology is placed outside of the digital asset context, it is more like a document-based database with some clever but unnecessary encryption attachments, especially in the commercial world.

This is a cool technology, but not as revolutionary as many people claim.

Of course, building a new infrastructure for a revolutionary technology does take time, but there will eventually be many speculative tools in these projects, suggesting that the reasons for their existence are hollow.

what does this mean? I believe that the proliferation of out-of-control speculation of BTC and other digital assets is the result and performance of distributed technology that is simply incompatible in China's economy.

In short, BTC does not match our current centralized economic model.

However, please do not consider the above conclusions as a disappointment to BTC. Quite the contrary – recognizing that BTC is incompatible with our current economic model is actually a real relief for us. It can free us from the invisible shackles. Until now, I realized that we can use BTC and other digital assets to make real innovations.

We need to sort out the cognition from the beginning.

I have seen many people who have truly believed in digital assets, and their potential to correct the world's mistakes is moving. They painstakingly tried to fundamentally eliminate the great characteristics of BTC: distributed, anti-censorship, and no trust consensus – until regrettable.

For many people, the current digital assets represented by BTC are no longer considered a great innovation, but a deadly killing.

Many people think that finding a way to build new things after the market crash in 2018 will make digital assets alive. Compromise is a necessary condition for survival. Relatively speaking, seeking regulatory, BTC ETF approval and participation in IEOs seems to be much easier.

But I don't agree. I think it is much better to walk and explore in the desolate wilderness than on a flat road leading to a dead end.

Ok, where do we start?

As mentioned earlier, the key is to explore the rich world behind the concept of decentralization, rethink and examine everything we know, beyond technology and speculation, and delve into the centralized and distributed dual world.

Reddit will accept cryptocurrency rewards, this time without robots