In March 2019, global blockchain applications began to heat up.

According to the incomplete statistics of the Inter-Chain Pulse Institute, in March 2019, 60 blockchain application projects were disclosed globally, an increase of 15.4% from February. From the perspective of industry distribution, blockchain application projects are still concentrated in the fields of finance, government affairs and traceability, but compared with the past few months, the proportion of projects in the three major sectors is declining. This means that blockchain applications are moving beyond the areas of government, finance and traceability.

According to the statistics of the Mutual Chain Pulse Institute, in March 2019, the blockchain application projects disclosed in the three major areas of government affairs, finance and traceability accounted for 18%, 15% and 12% respectively.

In the field of government affairs, China has promoted the fastest application of blockchain. In addition to blockchain electronic invoices, commercial registration, real estate information registration, and judicial depository evidence collection are becoming hotspots in the government field.

For example, Guangzhou Industrial and Commercial Bureau plans to pilot the “blockchain + commercial service” model in Huangpu District and explore the creation of a shared “registration network”. Chongqing has issued the first electronic business license based on blockchain technology in March, and since then The newly registered business licenses are all added to the government blockchain. The “Real Estate Integration Service Platform” created by Ping An City using blockchain technology has been launched in 28 cities across the country.

In foreign countries, the application of blockchain in the field of government affairs mainly focuses on government election voting. For example, the Russian ruling party, the Russian Party, has applied blockchain technology to electronic voting and counting votes, and Denver, Colorado, also plans to use the blockchain system to store and track votes in the May municipal elections. 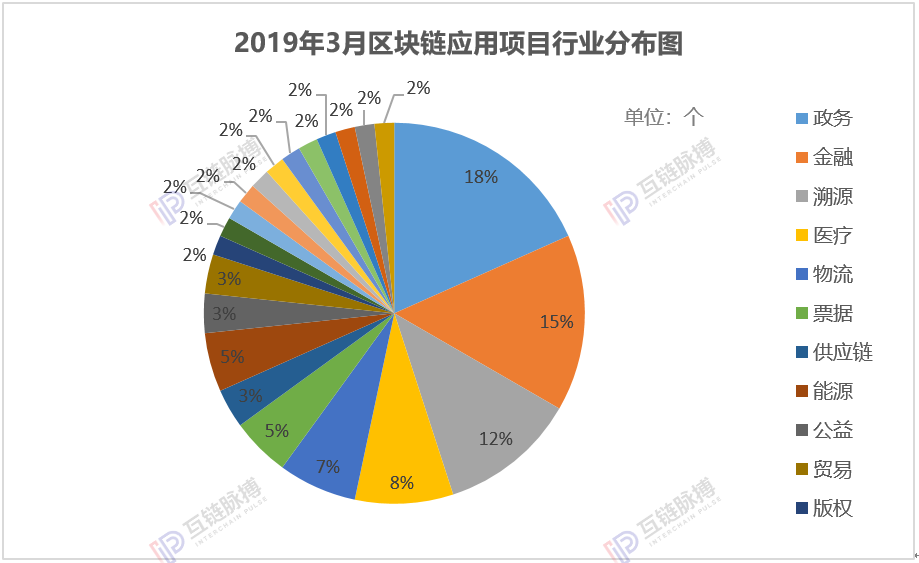 In addition, e-banking acceptance bills, certification mortgages and settlement of repo transactions are becoming new directions for the application of pilot blockchains in financial institutions.

For example, the blockchain electronic billing system developed by the Agricultural Bank of China and the Xiong'an Group has been able to support the group's implementation of the e-banking acceptance billing business in the blockchain fund management platform; Deutsche Bank and Deutsche Börse have successfully used distributed ledgers. The technology enforces a legally binding settlement of repo transactions, while the Spanish stock exchange BME plans to introduce a blockchain system for certification mortgages by the end of the year.

In terms of traceability, food, alcohol and luxury goods are the main application areas.

In addition to the above three areas, the number of blockchain applications in the medical, logistics, supply chain, energy and trade sectors has also increased.

For example, in the medical field, IBM has built blockchain technology platforms in Japan and Israel, respectively, for drug supply, medical data exchange, and counterfeit drugs. In China, Ali Health and Alipay and Wuhan Central Hospital built a "future hospital" based on blockchain and other technologies have also been officially launched.

In the past 24 hours, the entire network has exploded a total of USD 77.012 million

Vitalik: The results of personal adventures can sometimes benefit the entire group.