At present, almost all bank-type state-owned enterprises are more or less involved in the business of blockchain. The inter-chain pulse is summarized in the article "Decisive battle blockchain financial battlefield Chinese financial institutions action map", Industrial and Commercial Bank of China, China Construction Banks and other practices in the field of blockchain finance. Therefore, in recent days, Mutual Chain Pulse has hereby counted the list of non-banking central enterprises involved in blockchain business, and detailed the blockchain practice of various enterprises in recent years.

As of April 2019, there were 97 central enterprises managed by the State-owned Assets Supervision and Administration Commission of the State Council. According to the inter-chain pulse statistics, a total of 19 companies explored and developed the business in the blockchain field. In other words, nearly one-fifth (19.58%) of the current state-owned enterprises are implementing blockchain-related practices.

The future is already early than imagination

In recent years, the future led by blockchain technology is gradually expanding in front of us, and the practice of central enterprises in the blockchain field seems to be earlier than our imagination.

Since 2009, the number of domestic blockchain enterprises has continued to grow, and the chain of links has observed the “White Paper on China's Blockchain Industry Development”. In 2014, the number of new blockchain companies was the largest in a single year.

Following this wave of enthusiasm, China Unicom, one of the three major operators, has also joined the blockchain technology innovation. Since 2015, China Unicom Research Institute has been developing research on blockchain related theory and technology, open source software, distributed storage, consensus algorithms, and applications. It is reported that China Unicom has served in various international standards organizations and open source communities such as ITU-T, 3GPP, GSMA, ONF, etc., leading and jointly leading a number of international standards and forming a stable team of standardization experts.

China Mobile, which is also one of the three major operators, applied for blockchain-related patents in 2016. According to the patent application of the State Intellectual Property Office of China, China Mobile Communications Corporation announced two application patents related to the blockchain in June 2018, all of which were submitted in November 2016.

With the layout of China Unicom and China Mobile in the blockchain field in 2015 and 2016, more central enterprises engaged in blockchain practice emerged in 2017.

The State Grid began to deploy in the blockchain field in 2017. The State Grid Zhejiang Electric Power Company set up a research and development team in September 2017 to jointly develop a blockchain platform with independent intellectual property rights with the State Grid Information and Communication Industry Group. In November of the same year, State Grid submitted a patent application related to the blockchain to the State Intellectual Property Office of China. Officially announced in April 2018.

In December 2017, the "White Paper on the Application of Blockchain Technology", which was prepared by the State Grid Zhejiang Power, was officially released to the outside world. The first blockchain technology project of the State Grid Corporation of China – "Blockchain Technology in Energy" Internet Application Research. The project studied the application of blockchain in finance, payment, points, finance, internet of things, deposit certificate, etc., and proposed the real-time IoT communication technology standard based on blockchain for the first time in the world. The standard was in 2018. May was established in the International Telecommunication Union ITU.

Also in December 2017, China Sinochem Corporation successfully completed the pilot of China's first single blockchain crude oil import transaction for crude oil import business from the Middle East to China. As a supporting technology for this application, blockchain technology has successfully improved the efficiency of crude oil trading execution and optimized the transaction financing cost by 20% to 30%.

The so-called wave is between the micro-small, with the deduction of time, the early exploration of the blockchain field of various enterprises has gradually landed.

Among them, electronic invoice is the main application of aerospace information blockchain technology. The aerospace information selection alliance chain method is used to construct the electronic invoice blockchain circulation and integration application platform. The platform has been piloted in five regions of Hubei, Shandong, Beijing, Inner Mongolia and Ningxia, and progress has been good. In April 2019, the list of publicity demonstration projects for network security technology application released by the Network Security Administration of the Ministry of Industry and Information Technology also included the “blockchain-based electronic invoicing system” project of Aerospace Information Co., Ltd.

In June 2018, the first “blockchain-supply chain” subcontractor financing business in China was in the CCCC First Air Navigation Bureau (China Communications First Construction Engineering Co., Ltd., a wholly-owned subsidiary of China Communications Construction Co., Ltd.) The first phase of the interception channel of Rongdong District of Rongcheng District of Anxin District was successfully completed. It is reported that the business utilizes the data traceability, behavioral norms, and fund management functions of the blockchain platform to realize the penetrating management of infrastructure construction projects in Xiong'an New District, and to provide services and commodities for the construction of Xiong'an New District through financial services. Financing.

In July 2018, the subsidiary of COFCO Group will trace the source of high-end tea cakes based on the root chain. Later, consider introducing blockchain technology in the tea supply chain to achieve the management goal of reducing costs and increasing efficiency. 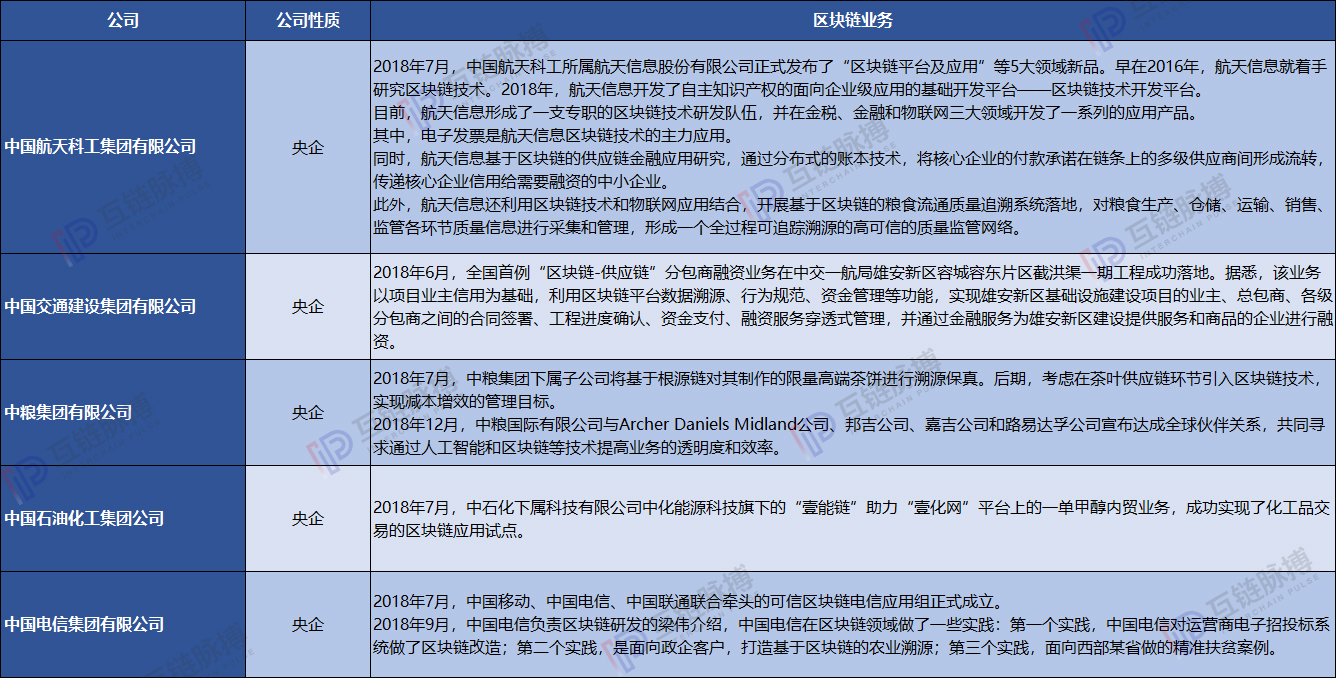 In addition to early development and deep exploration, the inter-chain pulse has also observed that cooperation with Internet giants such as BATJ is also a feature of the central enterprise to explore the blockchain.

In June 2018, the general manager of China Railway Corporation met with Ma Yun, chairman of the board of directors of Alibaba Group. The two sides conducted in-depth discussions and reached consensus on how to use big data, cloud computing, blockchain and Internet of Things technologies in the development of China's railway industry.

National power can be expected in the future

This year, China Mobile, the State Grid, and Chinese ships have continued to carry out relevant practices.

China Mobile conducted an exploration of the blockchain token model. At the beginning of 2019, China Mobile tried to show the value of the blockchain to ordinary consumers by integrating blockchain technology into ordinary household products. The company has developed a water purifier with built-in computing chips and IoT modules. Xiao Yi, director of China Mobile's IoT product marketing market, said that the smart device is different in that, according to the time and frequency of the consumer's use of the product, they will get a blockchain token called PWMC, and then they can It is redeemed for a replacement filter or for other items.

Not only the scope of central enterprises, but also state-owned enterprises are gradually exploring accordingly:

In January 2018, SAIC and the blockchain project also came to cloud Elastos to cooperate in the application of blockchain technology in the central control system to identify the identity, connect and control other systems in the car, and build a unified software development platform for smart cars. .

In August 2018, Taibao and the Jingdong Group jointly announced that the first electronic project for the realization of special invoices for value-added tax using blockchain technology was officially put into operation. 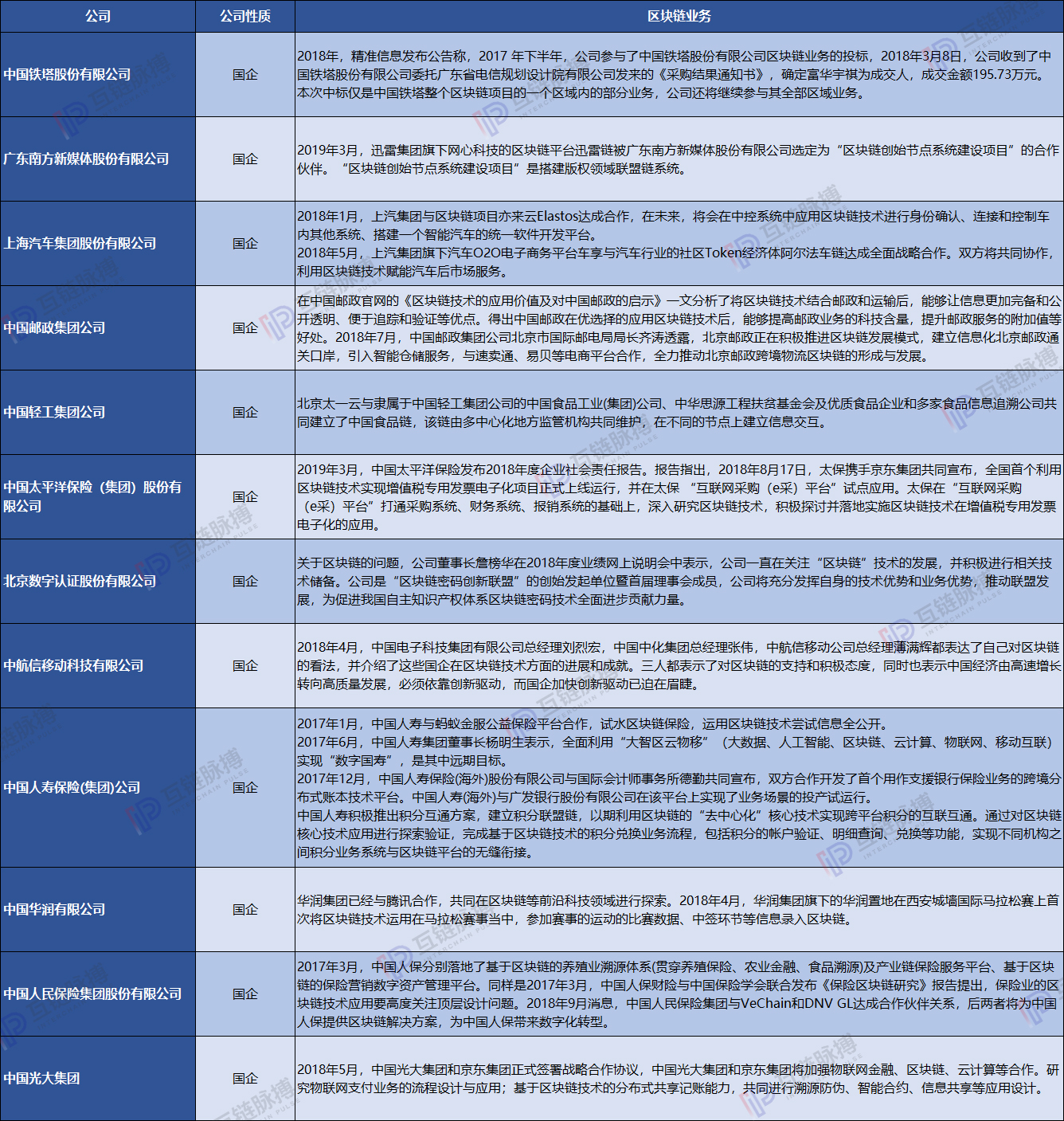 The blockchain practice of central enterprises and state-owned enterprises is increasingly promising.

In 2019, Zhejiang Commercial Bank will make full use of new technologies such as blockchain to create a "self-finance" platform for enterprises

BM: True decentralization is not what most people are after.