The alternation of the bulls and bears in the digital currency market is so sudden. It was still a bear market years ago, and it has become a bull market in less than half a year. If you think that it is not a bull market now, you have misunderstood the bull market.

There is a saying in the stock market that "only a bull market will have 10 times the currency", and Eastern Communications has achieved a legend of 10 times 10 months, so when everyone thinks the market will stop at 3000, it will rush. It went up to 3,300 points, although it fell below, but the market has indeed gone out of the bull market, but the cow's color is not enough. Perhaps most people still stay in the 17-year bull market illusion, the emergence of thousands of coins, a hundred times a lot of coins, just buy a coin can make money. In fact, such a grasshopper era has become history.

This year, BNB has turned 10 times, EOS has turned 6 times, Bitcoin has nearly doubled, and the main currencies have been turned several times, and the real bull market is real.

A survey conducted a few days ago found that the investors who entered the new market had higher returns than those who entered the market early. The main reason is that newcomers dare to play. After all, last year's bear market has left many old leeks without temper, and they are more cautious before making any decisions.

Now we must emphasize two points. First, the market has entered the bull market, and the possibility of continuing to attack is very high. Don't do it right with the market. Under no obvious negative conditions, don't easily go short. Second, the market bull market is always inadvertent. At the beginning, when you find out that it is a bull market, you may have begun to go downhill. Finally, try to seize this opportunity to make money. The trend of this circle is very obvious. If you can’t make money this time, once the callback is turned on, Will become very uncomfortable.

My point is that in the short term, I will look at the short term and maintain the original judgment. Since I have already pulled it here, it is a high probability that Bitcoin can touch 10,000 US dollars. Therefore, if you call back to the 5th line, you have to dare to buy it. In.

The following analysis of the trend with indicators: 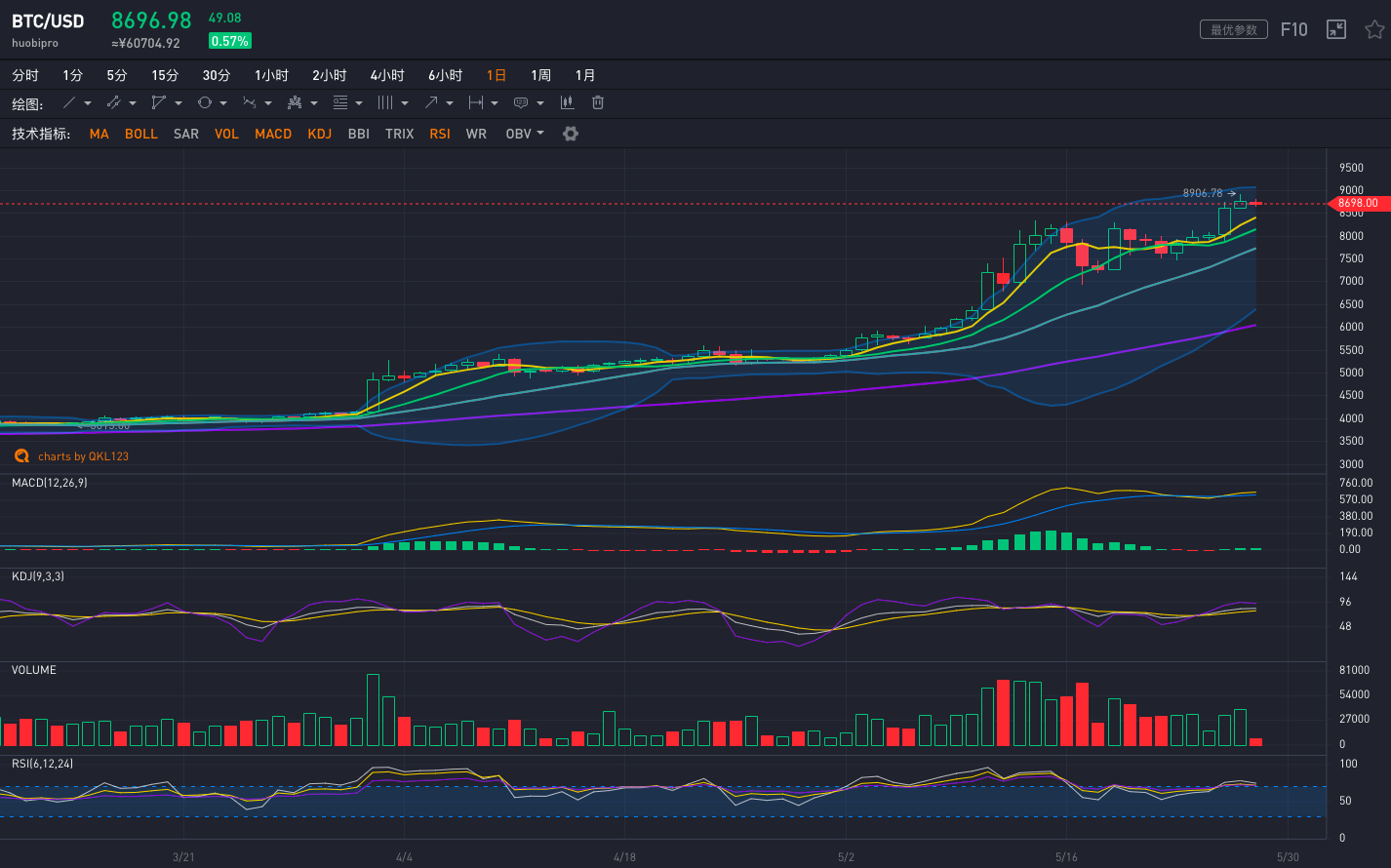 After the bitcoin rose, it entered the callback stage again. There have been several such cases. The depth of the callback is still very small. The buyer’s power is too strong. Under the stimulation of outside news, no one is willing to throw down the chips. The volume is also shrinking.

In fact, a closer look can be seen, the rise is heavy, the callback is shrinking, so as long as the callback does not increase the amount can be safely held, once the volume is not too late.

In terms of indicators, Bitcoin and the bullish trend, the buyer's strength is very strong. The MACD started to attack again, and the green column increased in a short time, and the DIF and DEA fluctuated at a high level. KDJ is still at a high level. Although it is weak for a short time, it is still at a high level and there is no exhaustion. The RSI is also above 80, and the buyer is very strong. The Bollinger line is up, the lower and middle rails are pulled high and can be intervened during the callback phase. The point is near the 5-day line, around $8,300. This wave of ETH has not increased much, but recently V God sent news of the upgrade, so ETH may have a good increase in the later period, you can focus on it. However, 1CO does not rise, and the value assessment will be discounted.

From the indicator point of view, MACD showed signs of adhesion, long and short contests have not ended, but the green column began to increase, the market is expected to go well; KDJ appears to be bonded, the position is low, RSI is near 80, the buyer's market. The Bollinger Band is in a flat state. The late trend of ETH is worth looking forward to, and there is a greater possibility of creating a new high. EOS has been greatly affected by the impact, and it has risen sharply. It has broken through the high point of 8 US dollars and has no investment value. I believe that it will fall back later. The next pressure is at $10. There is nothing to analyze on the indicator. All of them have been disrupted by two big Yangxian lines. They are in an overbought condition and have a strong upside. But at this time, the possibility of falling back is high. Coupled with the good news is approaching, it should be based on high positions.

On the whole, the market will continue to oscillate and accumulate power, and it is more likely to continue to rise in the later stage. You can wait patiently for the next wave of market.