In the second quarter of this year, it was troublesome for Bitfinex and USDT.

The Bitfinex and USDT parent companies, which have long been questioned about manipulating the market, confusing funds, etc., were brought to court by the New York State prosecutors at the end of last month. With the exposure of relevant documents and media, behind-the-scenes pushers behind the “normal flow” of the two funds have gradually surfaced. According to the US Department of Justice's published documents, the two defendants, Reiginald Dennis Fowler and Ravid Yosef, allegedly provided Bitfinex with up to $1 billion in illegal currency transmissions through Crypto Capital Crop's shell company Global Trading Solutions LLC.

The follow-up report of the blockchain media Decrypt reveals that the platform that uses the company's "banking service" is not only Bitfinex, QuadrigzCX, which was forced to shut down due to the mysterious death of the CEO, and the old exchange Kraken, who was also Crypto Capital. customer of. As for the related personnel, except for the two defendants, others appear in the form of a name or a pseudonym… In line with the curiosity of the company’s operating mode and behind-the-scenes personnel, the Hash faction continued to investigate along the existing clues and found that Crypto Capital is just the tip of the iceberg, and the money processing map involved is far more than that .

Track the discovery of the Yosef family

There are a lot of people who want to figure out who is actually running Crypto Capital, but the business of this company has more or less violated the law, and the true identity of its behind-the-scenes operators is deeply hidden. Among the members of the company that can be viewed on the open database of OpenCorporates, in addition to the secretary Ana Andrea Urriola Pan, others are at least ten directors or agents of Panama companies, and it seems more like a member who only provides names. If you continue to look down according to the information of these people, you will end up in a bunch of unrelated companies. 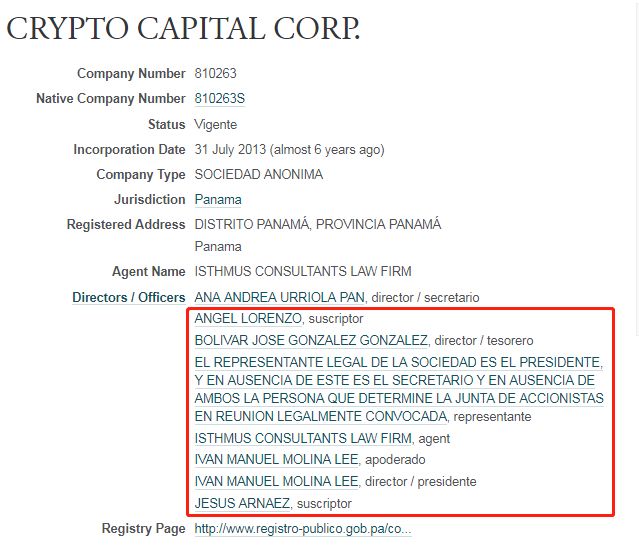 After looking for no results, we set our sights on the prosecution file given by the New York Inspector General; it contains a chat record that gives the new key person, Oz. The Crypto Capital representative, who contacted Bitfinex executive "Merlin" in 2018, was told by Unknown, who was unwilling to be named, to Ozzie Joseph, director of the Panamanian company Gratifon, also known as Oz Yosef. Crypto Capital director Ivan Manuel Molina Lee also appeared on the list of members of the OZ49 Corportation, which is associated with the shell company.

But the more interesting finding is that Oz Yosef and the defendant Ravid Yosef are brothers and sisters. According to Twitter's EastMother and Reggie Fowler'ed, Ravid has posted a wedding photo of Oz Yosef on Ins (currently Ravid's Ins account has been set to privacy). Adding the above coincidence information together, we can basically confirm that Oz Yosef is Oz. I mastered this relationship and continued to investigate along the lines of Ravid and Oz. A legal currency processing network centered on Crypto Capital is on paper. As shown in the chart below, not only Crypto Capital, but also the control company Global Trade Solutions AG behind it is also inextricably linked.

Crypto Capital official website shows that it is controlled and operated by Global Trade Solutions AG (screenshot from: cryptocapital.co) 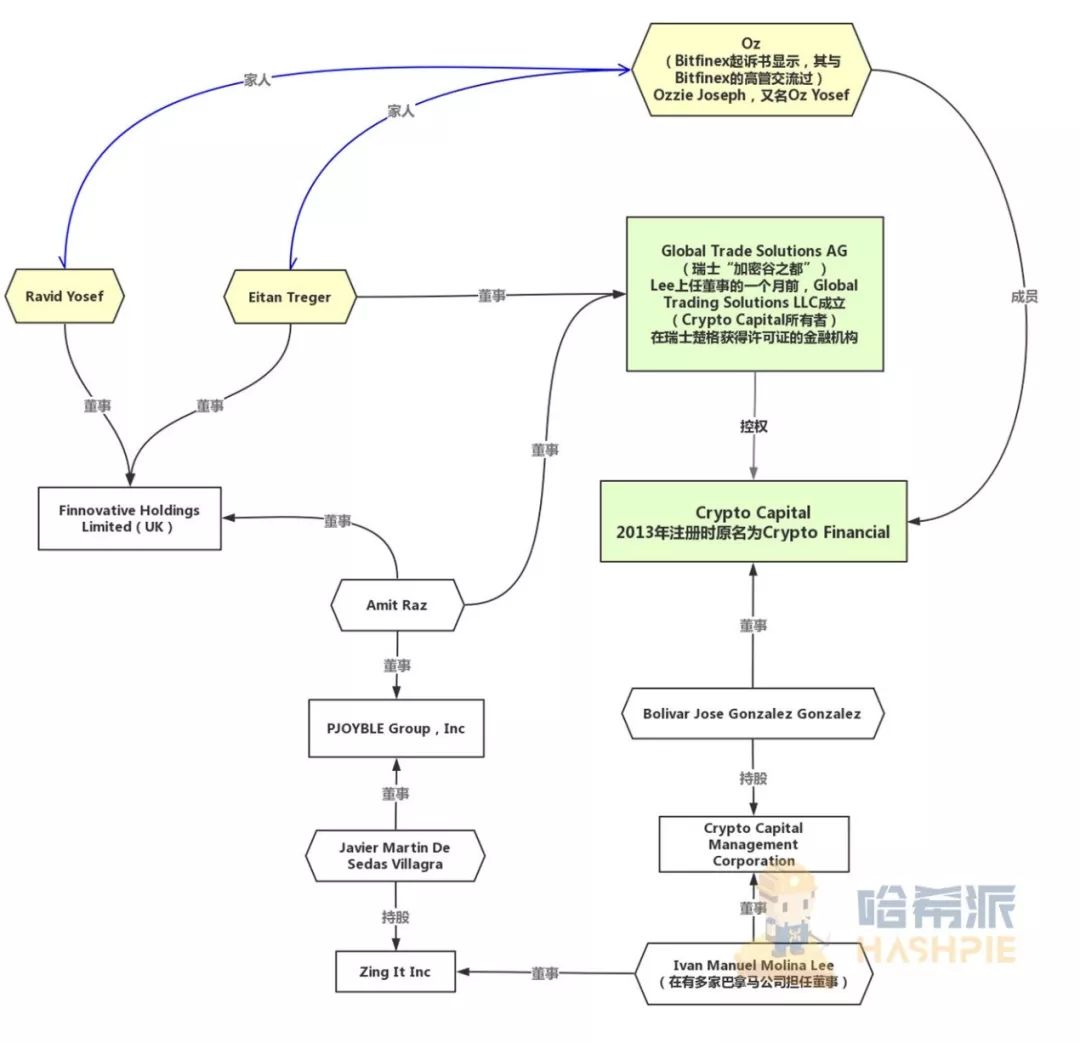 Note: The green box is Crypto Capital and Global Trade Solutions AG; the yellow frame is a member of the Yosef family.

Not only that, but from the network of their families, we can also find that companies that provide money services to Crypto Capital are, in a sense, their “home industry” . The directors and shareholders of these companies are more or less connected to Cryto Capital; and the names of the companies are very similar, such as Global Trasaction Services, Global Trade Solutions GA, and GlobalTrade Solutions LLC mentioned above. 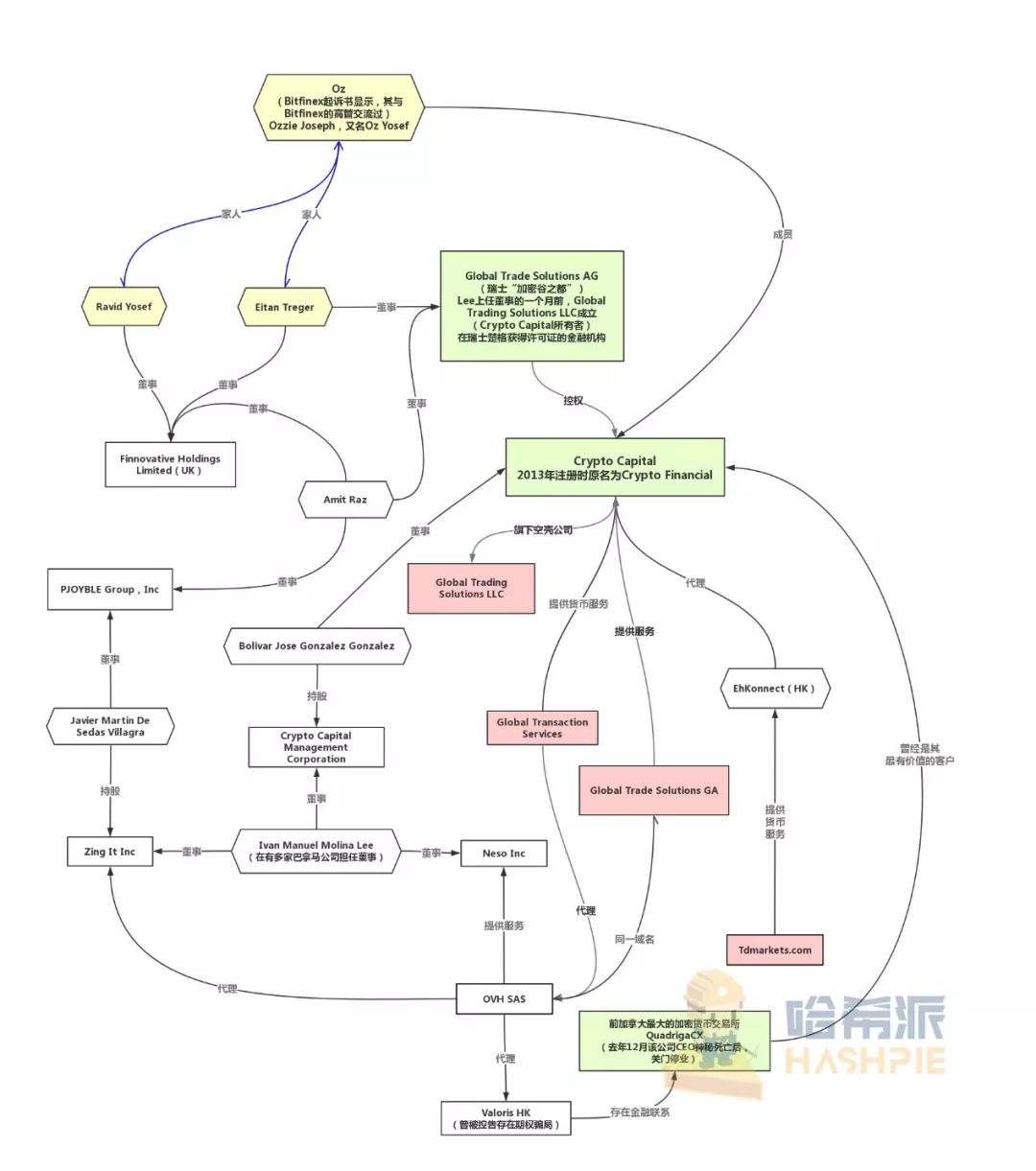 It is not difficult to see at this moment that the companies involved in these can almost form a closed loop . Combined with the evidence on the US judicial litigation documents and the media's previous announcement of Bitfinex, we can probably sort out the basic operating mode of CryptoCapital: 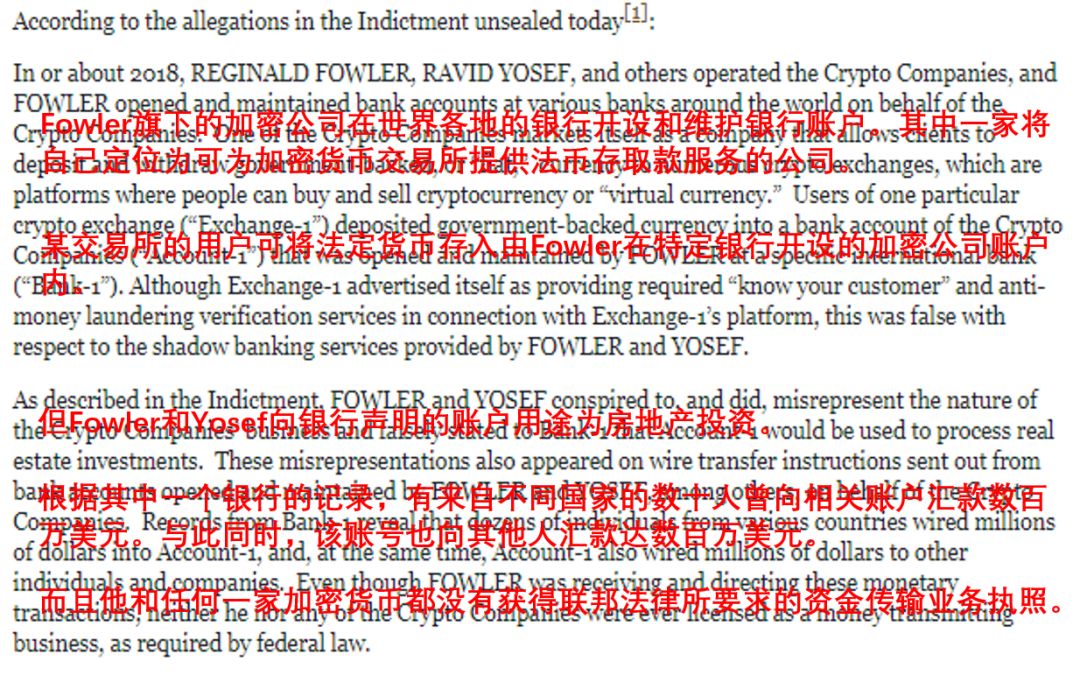 Screenshot from: Proceedings filed by the US Department of Justice

Through a number of shell companies, banks open bank accounts in the name of legitimate use in various banks, thus avoiding supervision and providing so-called "banking" for encryption companies. In short, it is a guerrilla warfare-like legal currency transmission mode, which continues to open channels for capital exchanges with banks through unconventional means .

Of course, the drawbacks of this model are also obvious – unstable; exchanges that have used Crypto Capital services before have been squandered by users. It should be known that the reason for opening an account with the relevant account is inconsistent with the scope of use. It is caused by the bank freezing and sudden closure. However, most of its shell companies, one of which has problems with the account, can also give a new one in a short time. The transfer channel to keep the business "normal". 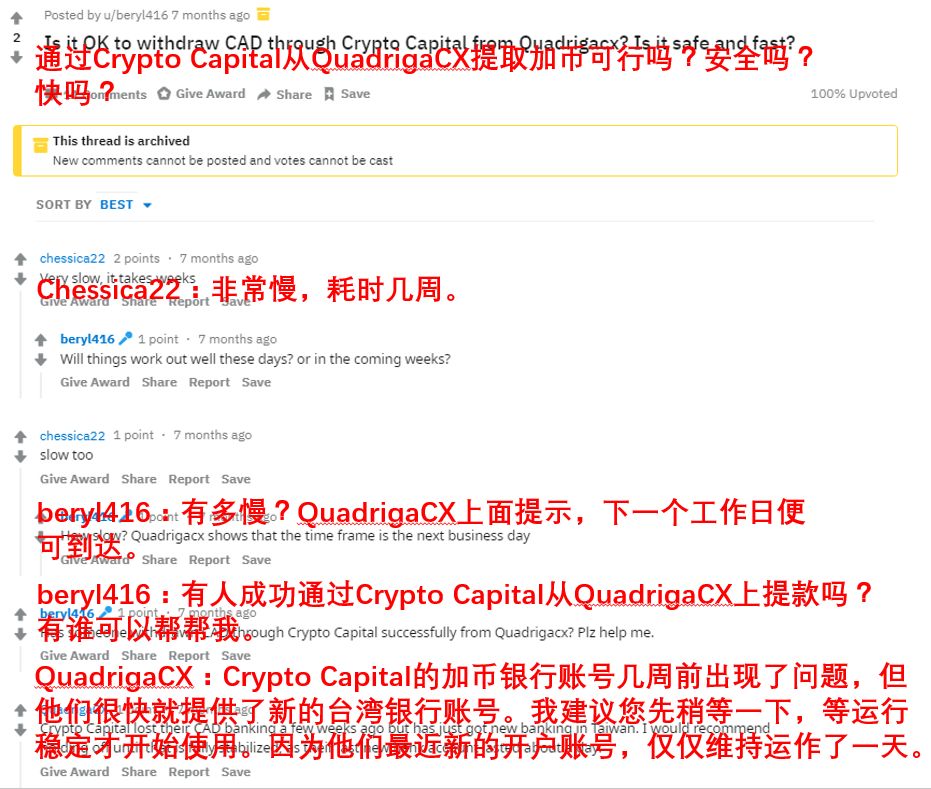 According to a letter sent to partners by Crypto Capital last December, the company has bank accounts in at least London, the United States, Portugal, Taiwan, and Poland. As long as the amount of the problem is small or not spread on a large scale, Crypto Capital and the associated exchanges can be smothered by remedies such as appeasement and emergency account switching; therefore, many exchanges that use the company’s services appear to be Operate as usual. 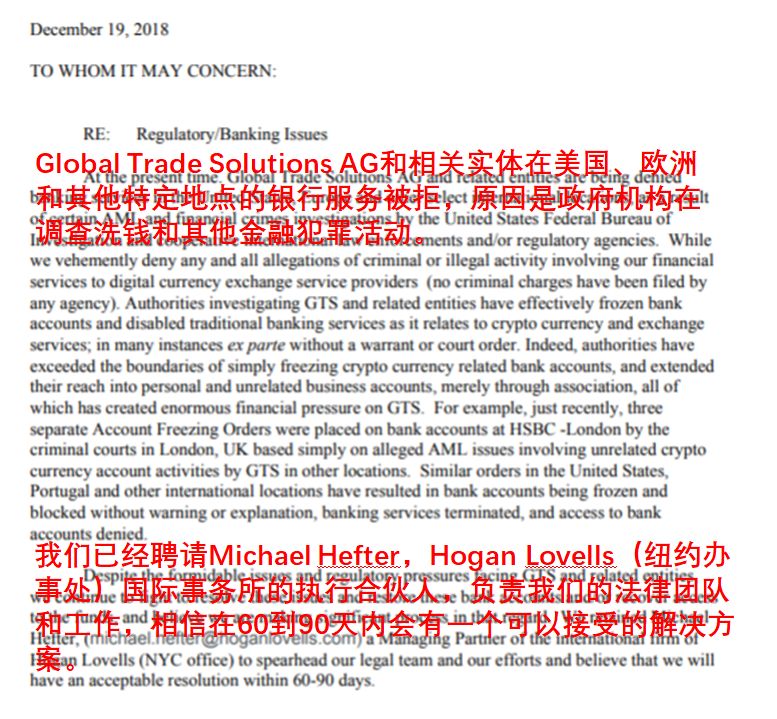 For this reason, in the traditional banks still evade contact with cryptocurrency companies, this shadow bank, which is outside the regulatory system, has become the bottom choice for many encryption companies' legal currency channels, and even preferred .

Indeed, since the emergence of the exchange, how to establish and maintain cooperation with the mainstream banking system has been plaguing the field of cryptocurrency. At this stage, only a small number of exchanges can be supported by mainstream banks, such as Coinbase, which has entered into a partnership with Barclays Bank in March last year, and Bithumb, Upbit, etc., which have slightly relaxed local regulatory policies. Some platforms can only choose the problematic banks like Crypto Capital and Noble Bank; or Buda, which has been repeatedly rejected by Chilean banks, and Kraken, who was suddenly shut down by JPMorgan Chase in early March, has long struggled with banks.

The existence of Crypto Capital meets the needs of the current encryption world. "In the process of the development of the encryption industry, a large number of virtual currency exchanges and companies have been challenged when they identify and maintain relationships with traditional banking. Its emergence has indeed met everyone's needs and has established itself," said Bitfinex Principal Consultant Stuart Hoegner in response to the investigation.

How wide is the hidden tentacles of shadow banking?

Although Crypto Capital's bright partners are only QuadrigaCX (now closed), Coinapult (Panama Bitcoin wallet) and two platforms with daily trading volume of only 10 million US dollars CEX.io, Exmo; but everyone knows Bitfinex and Tether used to be its customers in the mainstream exchanges of its services, Kraken and Coin.

As the New York prosecutor said, running a shadow bank represents a financial transaction service beyond the supervision of a large number of cryptocurrency exchanges, involving hundreds of millions of dollars. So we have reason to believe that there are many more trading companies hiding in the depths of using Crypto Capital or similar currency services than we have seen . From the current exposure, companies using Crypto Capital money services can be broadly divided into two categories: the above mentioned large cryptocurrency companies and trading platforms including Bitfinex; and a series of companies suspected of financial fraud and money laundering. Even personal.

It is inevitable that these criminals have difficulty establishing links with traditional banking services, and the pseudo-banking services provided by Crypto Capital are their best choice for docking legal tender.

In addition to the Defry media mentioned Safello, the bitcoin exchange that uses the company's money laundering business, Hashpie also found that Crypto Capital is also associated with Valoris HK, who has been accused of option scams, and the controversial character Erik Voorhees. In addition, the two companies that were confiscated by the Polish authorities for $371 million in the second quarter of last year have similar subtleties with Crypto Capital; according to Financemagnates, the two Panamanian companies are suspected of money laundering and helping crimes for Colombian drug trafficking groups. The numerator hides the identity through cryptocurrency. 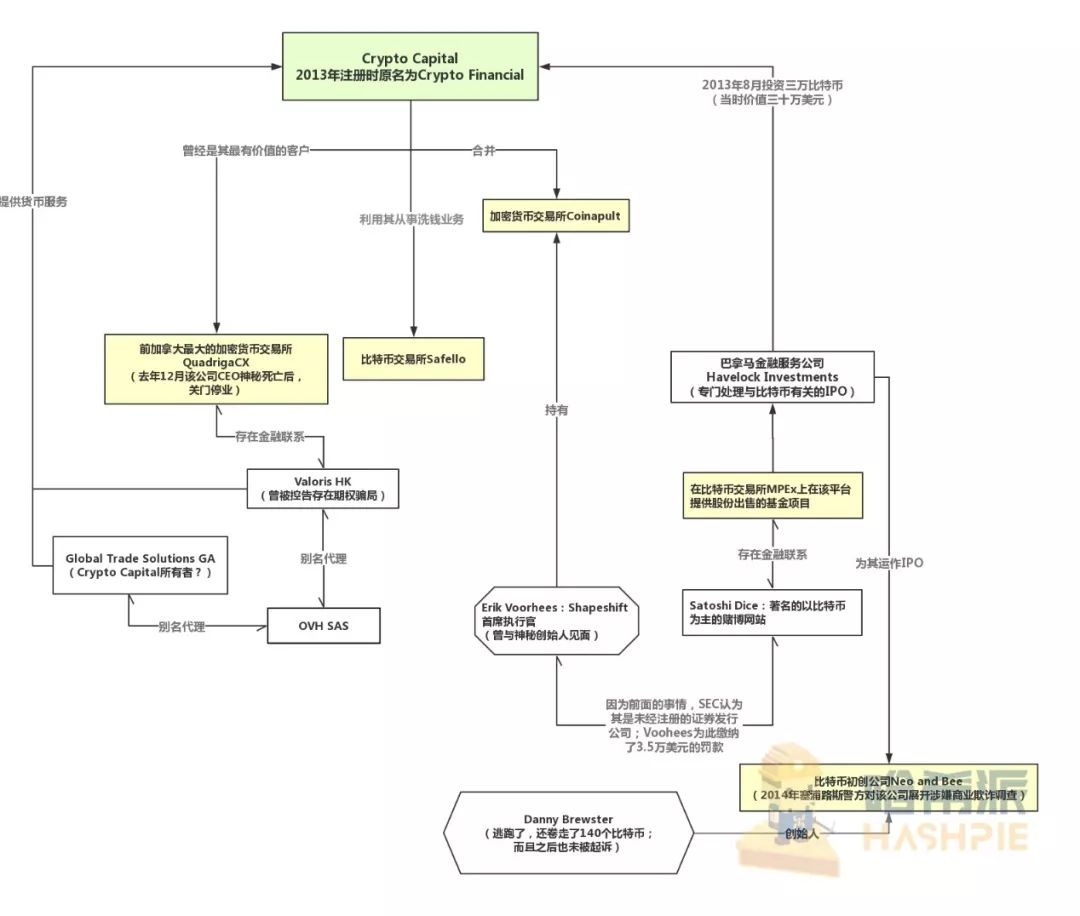 Note: The green box is Crypto Capital and Global Trade Solutions AG; the yellow box is for companies suspected of fraud

Therefore, Crypto Capital and related shadow banks can be described as black and white in the world of encryption. To some extent, they almost control the cryptocurrency and legal currency channels. At the same time, the tentacles are also infiltrated into various types of dark transactions in the field ; considerable. Imagine that last year the Polish prosecutors and the New York authorities had only seized two Panamanian shell laundering companies and Bitfinex to seize more than one billion dollars; it is conceivable that the size of the funds hidden in the corner we don’t know How big is it.

Note: The current platform providing statutory transaction pairs accounts for approximately 12.5% ​​of the market; and as an alternative to the legal currency approach, USDT still occupies more than 65% of the stable currency market, supporting cryptocurrency exchanges for related transaction pairs. As many as 64, the daily trading volume is second only to Bitcoin, at a level of about 20 billion USD/day. (The picture on the left shows the daily trading volume of the exchanges providing legal currency services in the market, data source: feixiaohao.com; the right picture shows the market share of each currency in the stable currency market, data source: Coinmarketcap)

If the encrypted world does not have a silver bank

Six years ago, Reddit’s netizen named Bitfan2013 claimed that he (and his family) had board seats in four small and medium-sized banks, and proposed the idea of ​​establishing a bank dedicated to cryptocurrency. 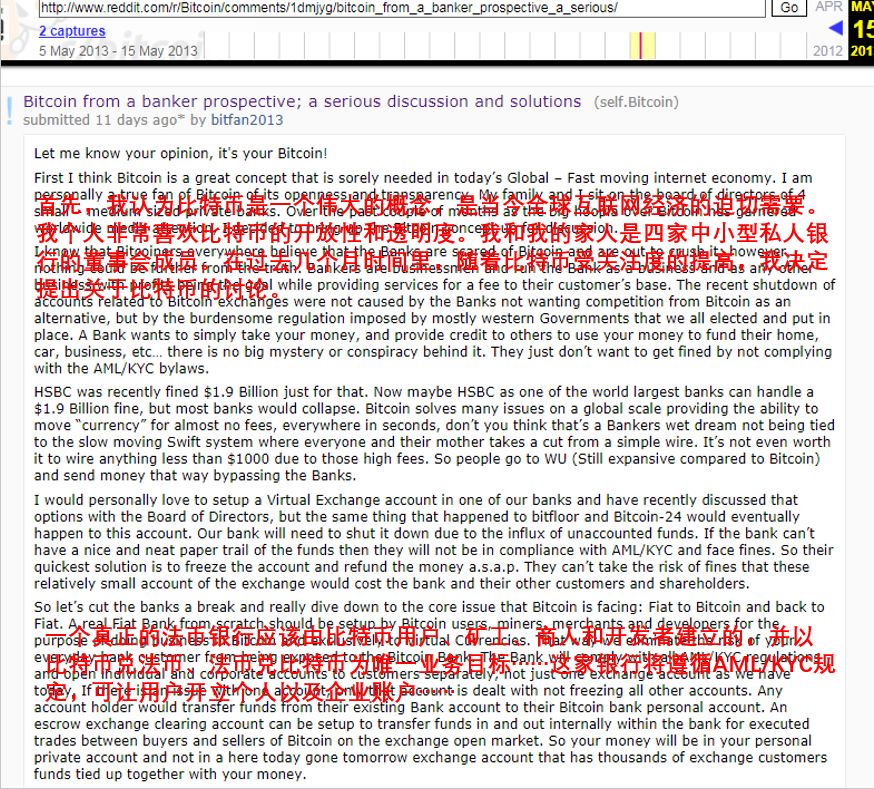 Six years later, Crypto Capital has slowly emerged. Although it does not follow the AML/KYC standard as envisioned by Bitfan2013, it does indeed become the momentum of the “central bank” of the cryptocurrency industry, and at this stage it has developed to the point where it is difficult to replace.

Even if it was revealed this time, it was only a part of Crypto Capital's branch in the United States that was censored by the New York prosecutor. The fund map behind it is much more than that. It is not so easy to be a guerrilla-like operation mode.

Assuming that one day Crypto Capital is really uprooted, these claims may all be verified; but from the current degree of dependence on the encryption world, there is no such thing.

[1] Tim Copeland, "The story of Crypto Capital's dark past and its deep ties with the crypto industry", Decrypt