BTC once again stepped back on the key support level, XRP released 200 million trust funds, 10,000 US dollars long and short game, these two days will usher in key points.

At noon BTC, long and short sentimental battles, on the one hand, everyone is waiting for a second dip, on the one hand there is a clear emptiness to buy a position to buy.

The following BTC chart, which corresponds to the two triangle convergence trends, each time the BTC volume breaks through the triangle resistance, it will rise straight, and then back to the box support.

In other words, the BTC will be weakly bottomed out in these two days, but the trend after the bottoming is completely different. 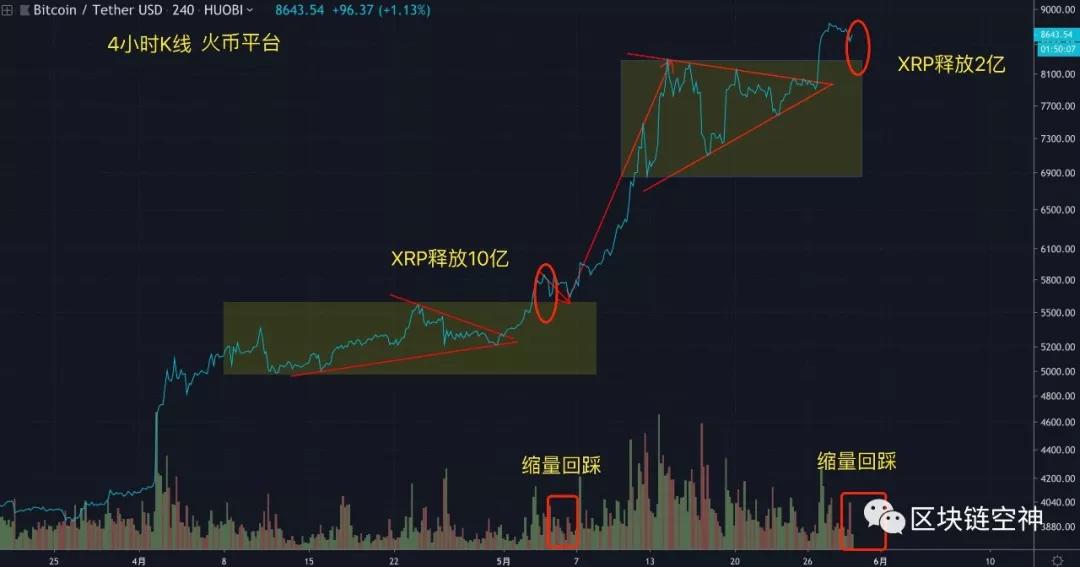 It is worth noting that in the vicinity of the key points, BTC will have a large amount of money transfer, and XRP will release the escrow funds. XRP will regularly deposit the escrow account currency every month, and the USDT price will increase in short-term fluctuations.

Many friends said that the BTC has risen so high that the price will definitely fall and make a double dip.

But waiting for the trend market, there will always be missed opportunities. The following picture is the pair of BTC and gold. For example, one is the daily line, one is the weekly line, and the currency market is one year.

The position of the gold circle has just passed the ETF. If the BTC completely replicates the trend of gold, it can be thought that the currency circle will become a mess.

The best way to operate now is to operate the mainstream currency in the short-term, and the spot will start to arrange the small currency market.

For the short-term operation of the mainstream currency, if you want to go back to the box, you must wait for the volume to break through.

There are no identical leaves in the world, and history will not be completely repeated, but one thing is the same, and the market will always exceed everyone's expectations.

After the big rise, there will always be a big drop, but you can't give up any profitable operation because of the expected fall.

USDT transferred 1.61 million to the trading platform, which is expected to be good for the price of the currency. The number of large transfers of BTC will increase, and the short-term fluctuation will further increase.

The price of the coin needs to be stepped back on the bottom and test the support below. The operation is mainly based on wait and see, waiting for the price of the currency to stand firm and support the key points, and then operate.

Decentralized trading platform Switcheo is on the EOS main online line, which plays a role in the price of the currency. In the past two days, BM frequently shouted in the telegraph group, and Akong felt that the strong EOS market would continue to be honored to 6.1 days.

The price of the currency is V-shaped, but the apex continues to decrease. Only when the volume breaks through $8.15, can Anlin be raised again.

EOS is still in a volatile trend, and the operation is mainly on the sidelines, waiting for the price of the currency to further bottom.

Compared with other mainstream currencies, ETH is slightly weaker, and the small vertices are constantly decreasing. Only when the volume exceeds 280 US dollars, ETH can break the weak pattern and make up and strengthen.

Akong believes that ETH continues to sort out the trend, and the operation is mainly based on wait and see, waiting for the mainstream currency to further bottom.

Short-term fluctuations have increased. Today, under the expectation of releasing the currency, the short-term rapid bottoming out is weak. You will find that XRP and ETH are not out of the strong trend. The next two days will be the nodes of the XRP independent market cycle. In the period when the mainstream currency is bottoming out, do the XRP's upswing.

On the whole, the currency price is still in a volatile trend, and the operation can be high and low, waiting for the mainstream currency to bottom.

Fluctuations in the price of the currency increased, and the V-word rebounded, but the amount of energy did not increase, continuing the shock.

Akong thinks that LTC is doing shocks, and the operation is mainly on the sidelines, waiting for the opportunity to bottom out.

IOTA and BSV led the market. In these two days, BSV surged and fell, replacing BCH as a hot spot leader. The fork hotspot began to pick up. Akong talked in the last two days. Once the fork currency rises, the market short-term fluctuation will increase. Large, market hotspots come to an end, you need to pay attention to the risk of down.

At the same time, ready to layout the independent market of small coins, the small currency market is the real money-making market.