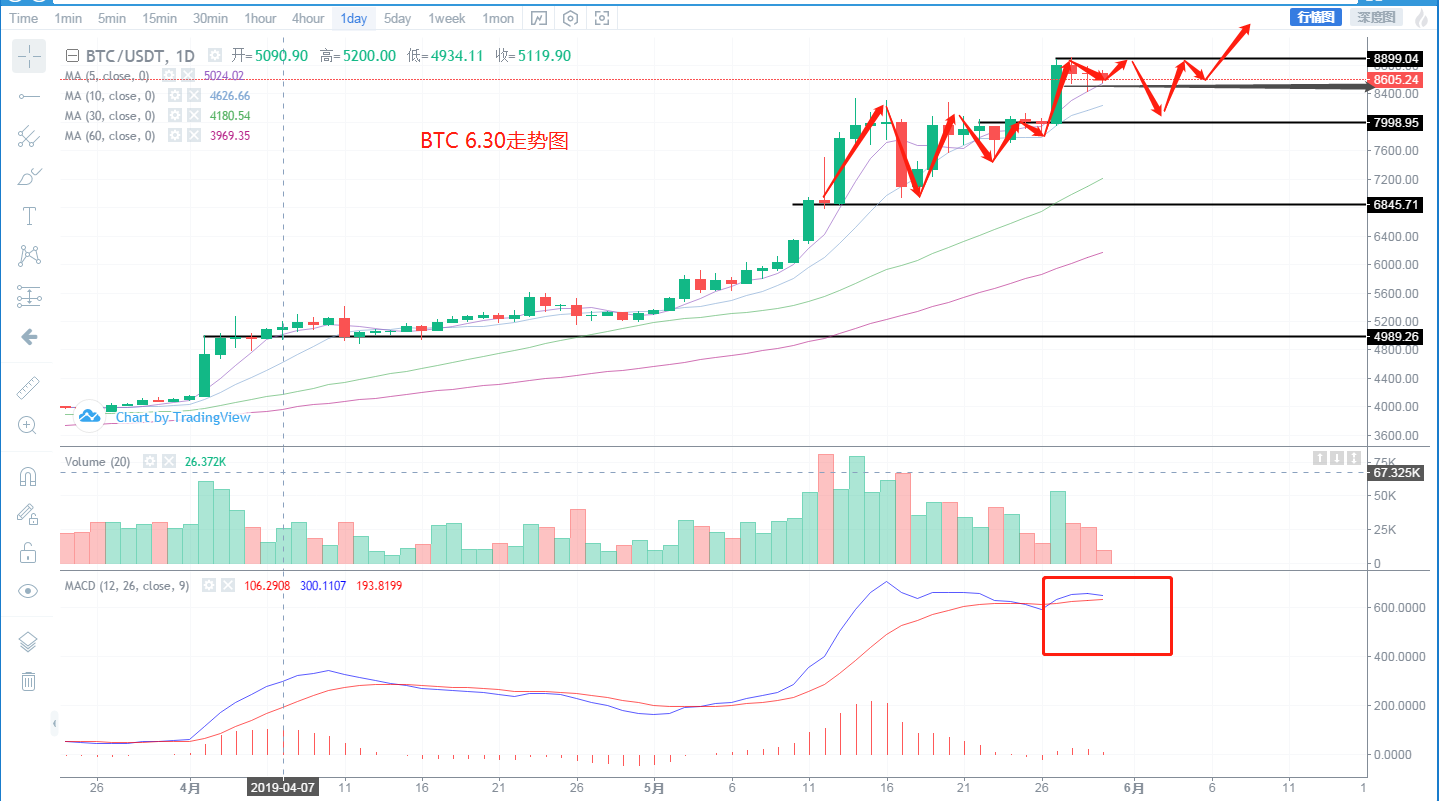 Bitcoin continued its high-volatility trend and gradually fell around the high level. From 8900 to 8600, the overall trend has been somewhat weak. From the daily chart, it can be seen very clearly. The three-wheel pull up the consolidation time ladder. At the same time of the reduction, it also gradually changed the shock into a deep callback. The current MACD aspect of the current round has gradually had a tendency to die, and the volume of shorts has increased from day to day. The moving average system is a change node today, and the price once stood for 5 days. Line, you can expect a deep callback, you can see 8300. Can support. The current 8550 is still a short-term small support, focusing on whether it can stand still.
In summary, this round of callbacks is already on the road, we need to pay attention to whether the 8550 and 8300 nodes can effectively support. At present, the general direction is still much, so this round of callback is a good opportunity for our spot to add positions, do not have to worry about the change of the wind. In terms of contracts, the day is mainly empty, and the reference point is 8700. According to the intraday change, once the correction is over, the trend can be.
ETH 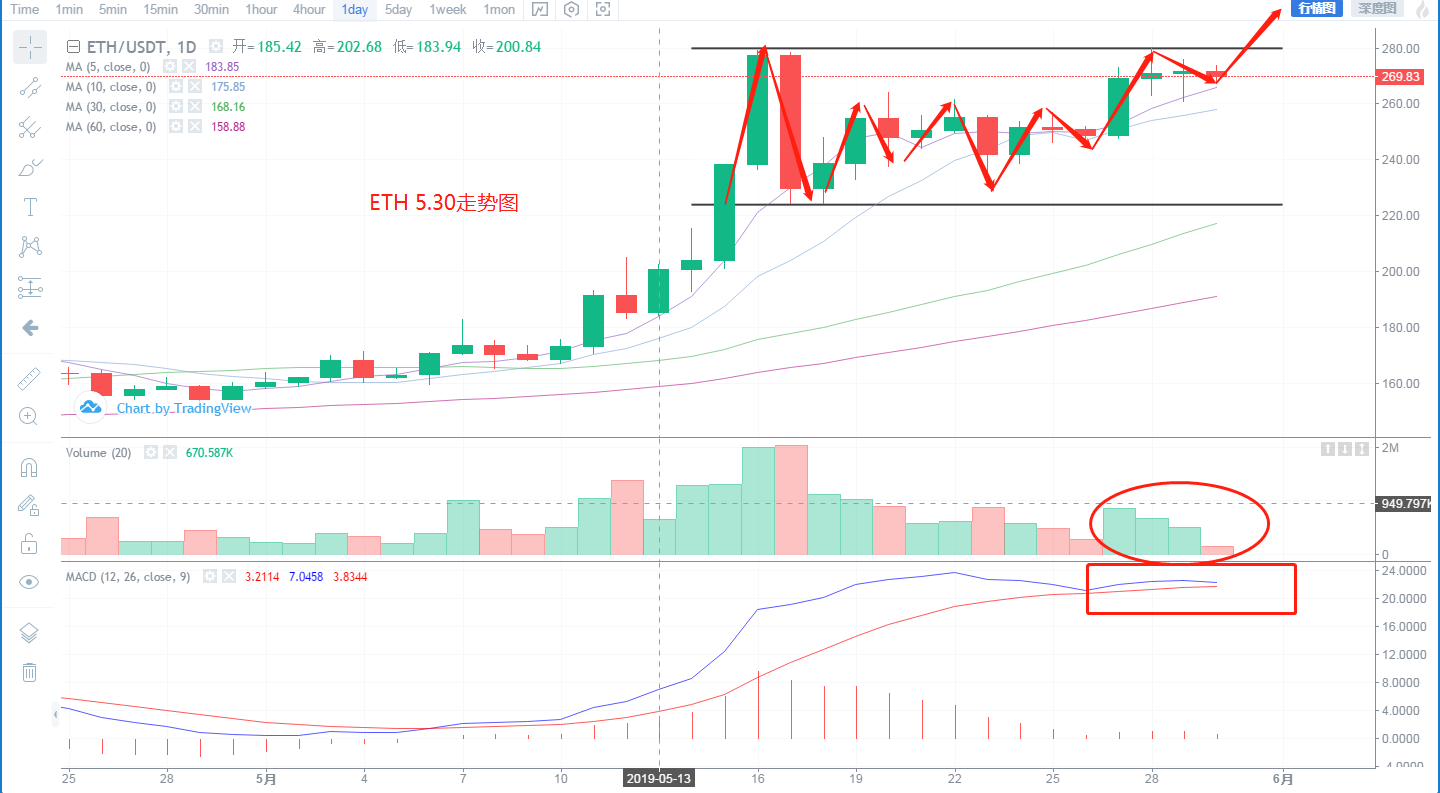 This round of bitcoin took the lead in the moment, in addition to the bar currency, the other has different levels of consolidation and stepping back, continuous Yinxian, Ethereum is still strong and continuous Yang, also indicates that this ether does not want to move in this round The market is mixed, resulting in a decrease in attention. Returning to the disk itself, it is not difficult to find out the daily volume and the inflow and out of the funds. The ether has been eating in the small warehouse, the bottom price, the K-line form is also firmly on the top of the moving average system, and the 280 breakthrough is not far away. Then, in the case that the market is not overwhelmed by the collapse, for the ether, we take the reverse thinking, the spot can be initially entered into the position, and the bottom position is not moved. The contract is mainly low, and always pays attention to intraday changes.
XRP 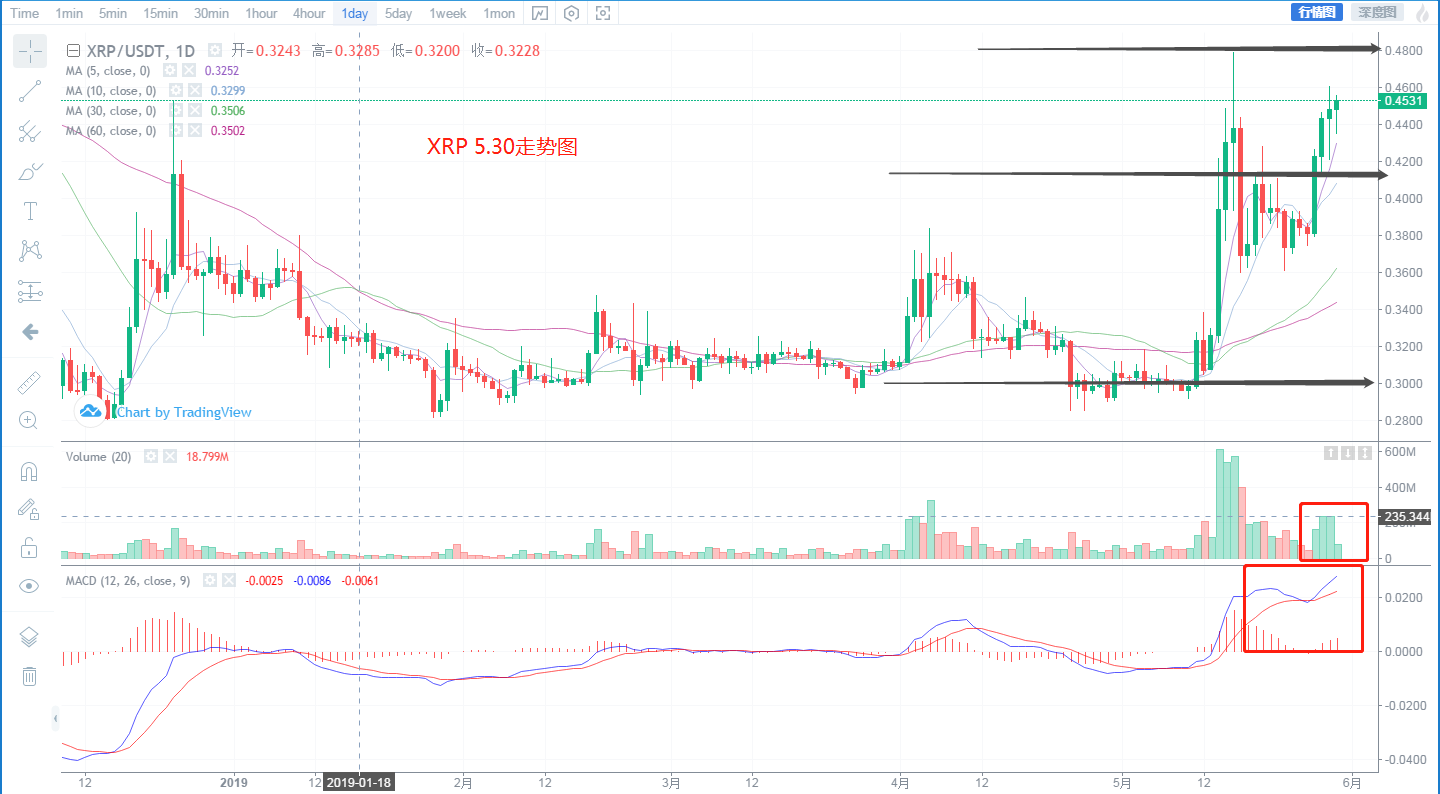 Ruibo left the big box, this round of market has not yet exerted force, just follow the wind, the last round of high points have not broken, so it can be buried. In terms of spot, you can enter the low position. The contract direction is also pre-embedded, and the reference point of 0.42 can enter.
LTC 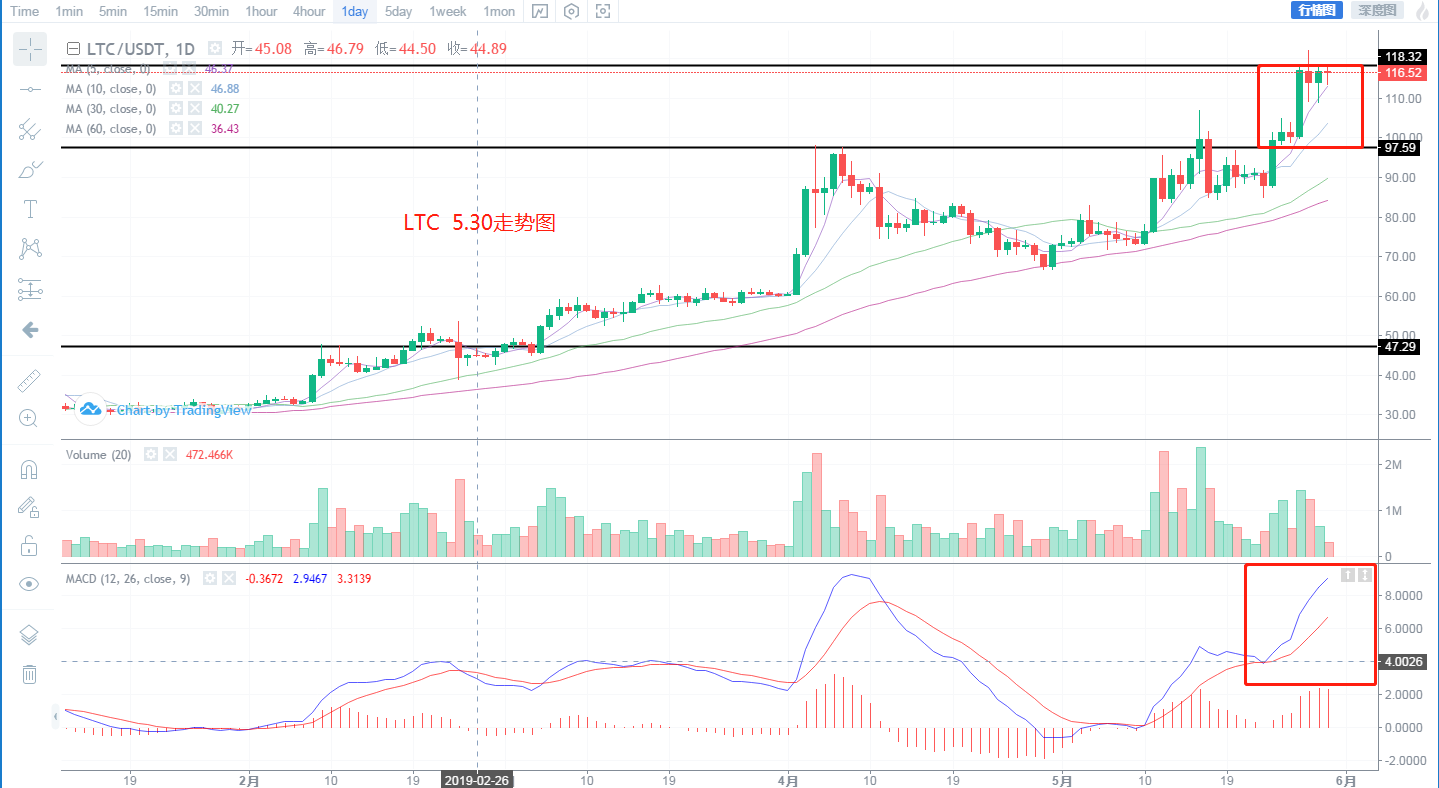 The spicy bar and the bitcoin are synchronized. The high-level shocks test up and down. They plunged to 108 yesterday and quickly rebounded to the 115 mark. From the daily chart, you can also intuitively see that the three rounds of the break, the latest key point is 120 positions, these days of attack failures have returned to 115 shock consolidation. At present, there has been a clear head-to-head phenomenon in the MACD. Although the moving average system has always been in a long position, the price has been stepping on the 5-day line to test support. The amount can be rotated more and more. It shows that the last round of hot money has been liquidated and closed, and the market volatility has corrected the trend. Therefore, the spot position is held, and the callback is entered into the market. The contract is replaced by a long and short range of 112-120. Once you break the interval, you can do it!
BCH 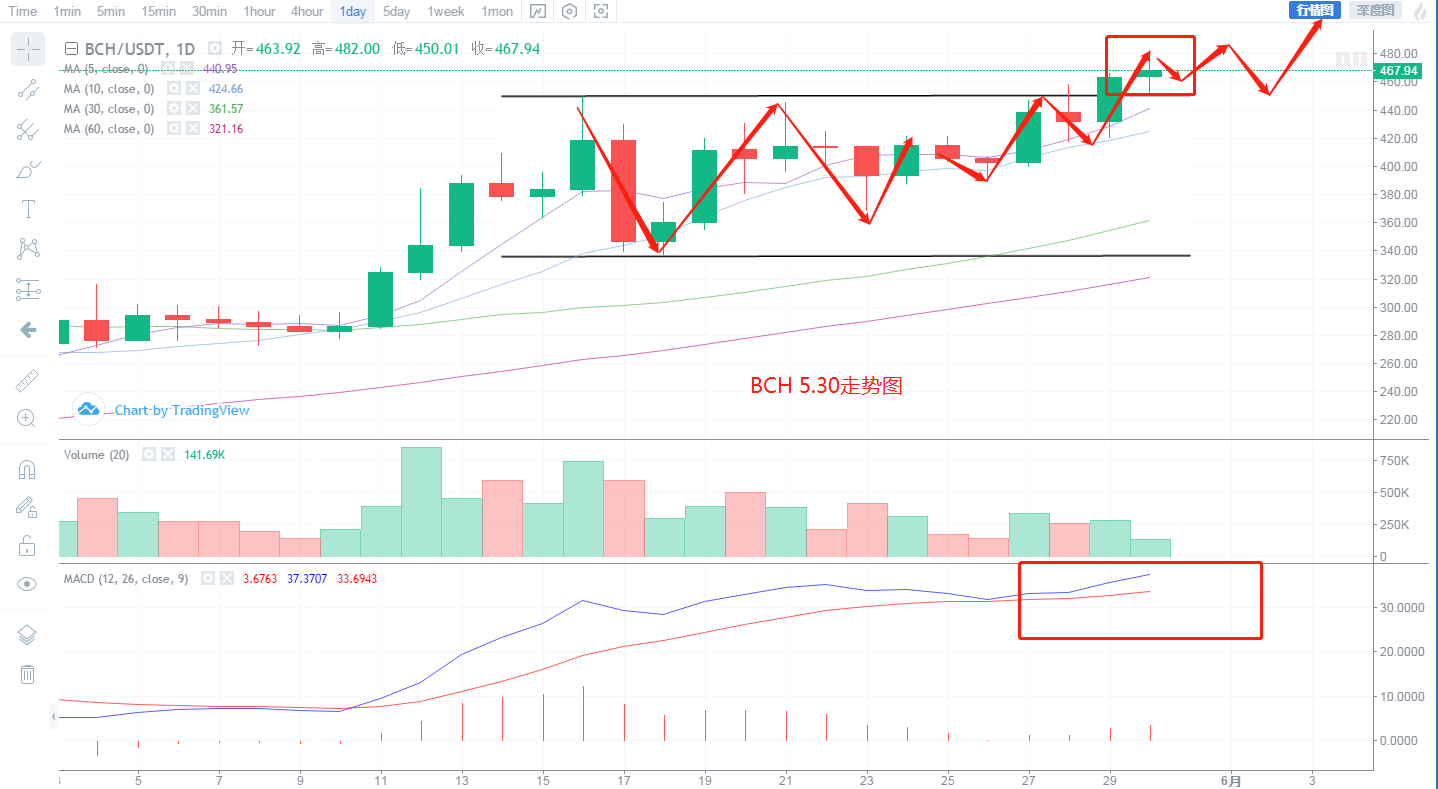 The prince’s naming dispute has been raging, and it continues to this morning. It is also the rapid pullback of 482, which is only 261. In just half an hour, the amplitude has exceeded 20 points. The market volatility is very large compared to other currencies. This is also the impact of receiving the BSV. Once the Prince is not confronted with the BSV, the eyes of the new market investors will be attracted. This is a terrible injury to the Prince. The Prince also has to catch the ducks. So at present, technically, in such a situation, the index indicator can only provide short-term and selling point help, the mid-line cannot be fully reflected in the technical side, and the off-site news and BSV action should be linked.
For the Prince, the last round of highs 480 stood firm and watched 500. Yu Sheng pursuit is a must, look at the 440 support below. Spot buying is not panic, dispute market, will certainly force, related to the fundamental, the banker will not confess to the scalp. The contract needs to change in real time, the BSV confessed to the flames, and the Prince will step back. So real-time changes will prevail!
EOS

The grapefruit leader was hit by a wave of pressure in the market, and today it is back to the top of the 8 knife. The grapefruit in the long line is very obvious in the rising trend. For the grapefruit, the individual has always been a currency other than Bitcoin, the current grapefruit. There is a small back step, in the daily line level, the day's back step is already reduced compared to yesterday. The MACD head is not obvious, and the moving average is still long, so we don't have to worry about it. For the grapefruit, it is still bullish. One word, oh. The contract for the two days concerned about 0.824 does not break the appropriate empty singles hedge, the main warehouse is still selected low. Market summary: Bitcoin has been maintained at 8550 node volatility. If it is not broken down, we can choose some currencies that are not rotating and lead, such as Ethereum, Ruibo and other strong coins, for pre-buried positions, waiting for rotation. It’s time to make up. The current mainstream currency has already had divergence, and the Prince is daring, a show. The ether continued to accumulate on the plate, and the hot bar ended its efforts to properly step back. The whole market split 3 trends, but the overall trend was bullish. In the short-term, we still need to distinguish the currencies with different trends, and take the opportunity to make a decision.

The above only represents the author's personal opinion and does not represent Babbitt's investment advice.

Case study: How to create a synthetic trading pair?

Interview with Lu Yifan: How does the valuation of the $7.5 billion unicorn be a blockchain?