Market Analysis: Has Bitcoin formed the top of the round?

The market will always start 'cutting the leeks' after the eruption of the leek's chasing mood. The last big cake was first rushed to $9,000, and then it fell back. This trend is exactly the same as the first one that the heroes said yesterday. It is also an expected trend that we have been expressing recently. So, is the current pie already casting a short-term top, and will it enter the second bottom in the future? I personally think that the probability of a double bottom will appear, but it will become slower in time. From the cycle point of view, the pie does not fall below the intensive trading area of ​​5,000 US dollars, then the cycle is still in the bear-to-bovine stage, there is a wave of deep correction, which is more favorable to the end of the bull market, but this trend of deep adjustment may It lasts for a month or more, and it is a similar trend of rebounding one wave and one wave. At the same time, the second bottoming is also the time for us to build a second position. If the market gives us the opportunity, then we will be in the high position. By then, the probability of the amount of our currency can increase by more than 40%. So the general direction concludes:

1. The overall market is in the early stages of bear-to-bovine.

2. The market will get better and better in the next year or two.

3. In the next month or two, it is expected to go out of a wave and make a double dip.

So what about the short-term trend? Is there any chance to operate? The picture below shows a more fancy chart for everyone. I personally tend to go back to the market today and continue to explore the trend of the central section on May 14-25 in the next two days, and test the low point of the central section. 7200-7600 US dollars, after the stabilization, there is a chance to take a wave of rebound, and in this rebound, the cottage echelon may have a relatively good performance, the currency that nobody cares about before, there will be some action at a high probability, so by then Waiting for stabilization, we can do a short-term operation. 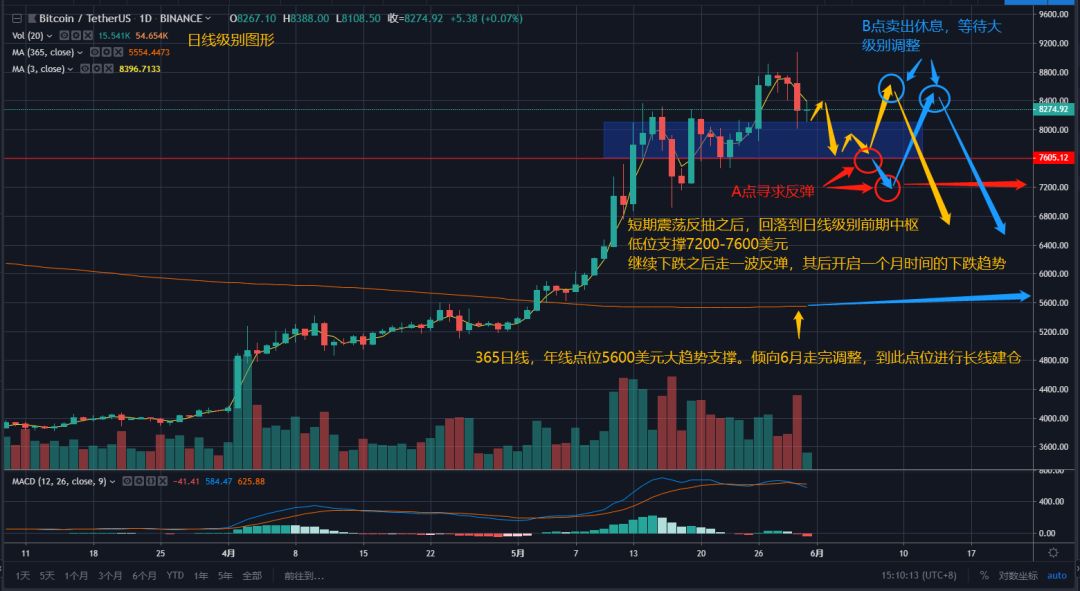 In the current interval, we do not recommend everyone's ADHD episodes, because many analysts will let everyone call back to make up the position today. In fact, many people who are vacant in the past will also make up the position in this position, thinking that it is an opportunity, this is from today. It can be seen from the disk that U's premium and price stability, this is a behavior of copying the chassis, but from the past experience, most of the first batch of chassis will be quilted, until the next time to continue to explore, the current price The probability of a bargain-hunting person will cut the flesh and draw a short-term low, and this low point will be a good time to grab the rebound. So we have a rest on the weekend, or wait for the signal to stabilize.

Do you know over-the-counter trading?

Let's talk about the topic of over-the-counter trading. There are data showing that over 20% of the digital market in the entire year of 2018 was conducted through over-the-counter trading. In the global investment market, the bitcoin market is quite special. In-market trading refers to buying on the exchange, but the vast majority of the purchases are just 'data', which means that the coins you buy, as long as they are not cashed, Then it is just a data of the exchange. The over-the-counter transaction is a solid physical transaction, which means that it does not pass the exchange. In my wallet, Bitcoin can conduct peer-to-peer transactions in private. These over-the-counter transactions will not be traded. The K-line chart shows that it can be compared with the stock's block trades, but there are essential differences. OTC transactions are generally carried out in large quantities. For example, thousands to 100,000 orders are more common. Bitcoin's over-the-counter trading has been 2-3 times the amount of on-market trading. What I want to say here is that many organizations or Dazhuang, in fact, too many will use OTC to ship goods. These behaviors are not seen in the K line of the exchange. Many amaranths will not pay attention to these market changes, then As long as it is not displayed on the exchange, it will not only cause a sell-off phenomenon, but also cause a seemingly good thing to appear, because once there is a large amount of over-the-counter trading, someone sells it naturally, then there is often a message. : A certain whale buys tens of thousands of BTCs. However, as far as the high-end market is concerned, over-the-counter transactions are often the behavior of large-scale cash-out, and those who take over are often those who are afraid of stepping on the air and are interested in the digital market. Therefore, in this market, there are many ways to cash out. Many times when the leek is still talking about the bull market, many profit-seekers have gone without knowing it. 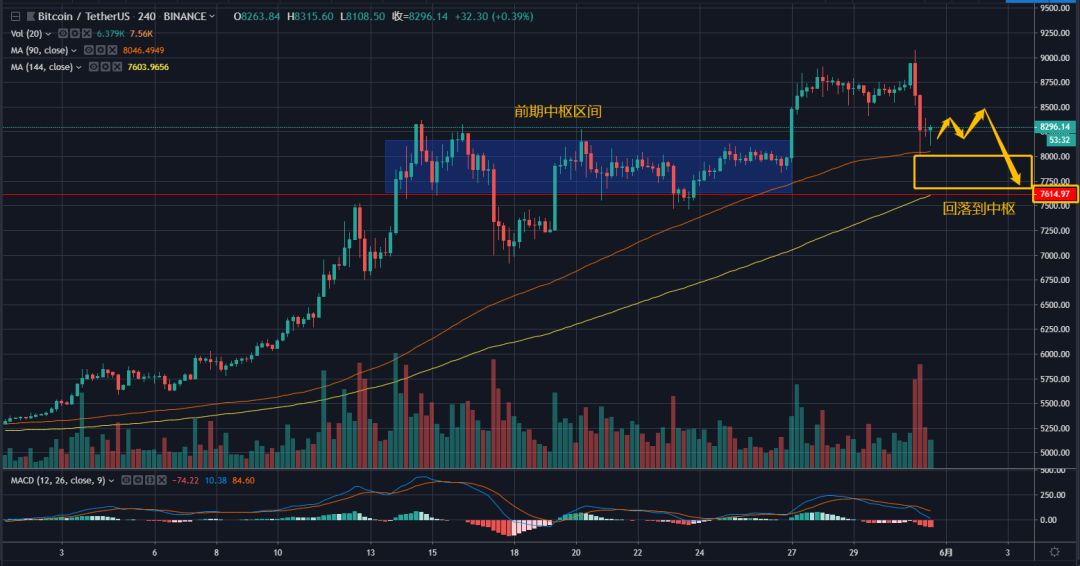 Today's analysis: The pie selected the first trend in the article yesterday, and the high-level fallback officially entered the big-level callback. Today I think the pie will remain in the range of 8000-8400 USD, and the short-term counter-sucks to the high point of the shock zone and continues the callback. The probability of the trend is relatively large. We can use the 4-hour MA90 and MA144 as support. At present, the pie is oscillating above the MA90, and there is a probability to test the 4-hour MA144 moving average in the next few days (the orange line above). Short-term support: $8,000, pressure: $8,400.

EOS: The drop rate is very large, and the situation of the main high position is heavier. Yesterday also reminded everyone to pay attention to the risk of falling back. The oversold small-level anti-pumping pressure is around 7.6 US dollars. In the short-term, a small anti-pumping is observed. The 4-hour MA60 is considered to be short-term support. The end of the anti-extraction will continue the long-term weak trend. Short-term support: $6.8, pressure: $7.6

ETH: Backward will remain wide fluctuations in the range of 240-260 USD. It is the first stage of the trend of the callback. It will continue to wait and see, not blindly bottoming out. Support level: 240 USD, pressure: 260 USD

BCH: Yesterday prompted a batch of profit-taking, hoping to help everyone avoid the loss of this callback, short-term shock range of 400-440 US dollars range. After the shock, the probability of weakening is large. The upper quilt is reversed and the position is reduced. The long-term probability will be adjusted for a long time. The support level is 400 USD and the pressure is 44 USD.

LTC: Wright also made a downward stroke as scheduled, breaking the support of $108 that was said yesterday. Currently, the MA60 is supported in the four-hour period. In the short-term, there is a chance to draw back to the 5-day line for $110. The probability is large, and it is mainly wait and see in the near future.

XRP: 0.48 high before the impact, will enter the weak adjustment phase, the shock range 0.4-0.43 US dollars range, the probability of continuing to pull back after the shock is greater, short-term support: 0.39 US dollars, pressure: 0.43 US dollars.