First, where are we from?

Bitcoin was launched in January 2009 and was originally limited to a few people. In the next three years, Bitcoin has received more and more media attention – but it is still very small compared to today's data. 99% of people who have heard of Bitcoin dismiss it – and don't hesitate.

After all, in the early days of Bitcoin, it was still a crazy, distant idea, and its meaning was difficult to understand. Even most people who realize the potential impact of Bitcoin are skeptical – after all, many people have tried to create digital, non-sovereign currencies.

Given the limited track record and limited economic value, it is easy to ignore Bitcoin (and not unreasonable).

A rapid price appreciation quickly changed the story from a "non-functioning thing" to a "tulip" comparison. Suddenly, experts generally "remind" what happened in the Netherlands 300 years ago.

At this point, there is a serious lack of understanding and appreciation of Bitcoin's decentralization and resilience – most authorities only say that Bitcoin will obviously "close". wrong.

In addition to the rise of Bitcoin, the rise of the infamous dark-net market “Silk Road” has made the new story “Bitcoin only used by criminals”. wrong again.

Bitcoin skeptics feel that the price drop proves this: "Look, tulip, I told you." "Now the Silk Road has disappeared, no one will use Bitcoin." wrong again.

Importantly, this has led to a major shift in the industry story – “blockchain rather than bitcoin”. Our idea is to harness the power of technology, not the digital assets built on these networks.

Again, this is not an unreasonable idea – it is true that at this point in time, for almost everyone, even insiders, (may think so). Powerful new technologies can be difficult to understand.

This has led to a “blockchain” competition for all industries, from healthcare to energy.

After two to three years of “blockchain rather than bitcoin”, hundreds of pilots, and “PoC” (concept proof), the implementation of “blockchain instead of bitcoin” failed to achieve results.

There are many reasons why these efforts have failed to produce significant value, but most importantly, there are three main reasons:

1. Open networks are more powerful than closed networks – look at intranets and the Internet

2. The chain's native digital assets are key components that make these chains functional and practical.

3. "Private Chain" is actually a database architecture that existed before Bitcoin – there is nothing new here.

At the same time, Bitcoin reappears – really, it will never disappear – but it will bring public awareness with more users, more deals, better security and more support infrastructure.

The broader market and industry are beginning to acknowledge and accept (a trend): open networks will defeat closed networks over time – public chains like Bitcoin allow anyone to participate, and anyone can develop on it — This is the root and core of the blockchain opportunity. People are beginning to realize and accept that bitcoin and cryptocurrencies will not disappear.

This has led the mainstream to rush to find and launch "better bitcoins." Of course, if Bitcoin is the first iteration, we can do better, right? Again, this is not an unreasonable idea.

Around this time and in the following years, people were eager to create new public chains to make trade-offs on one (or more) specific functions. In the meantime, we've seen the introduction of chains optimized for various features such as speed/throughput, privacy and expressiveness.

Many of these experiments were funded through ICO, which exacerbated interest in introducing different trade-offs and optimized experimental chains. While there are many good efforts and some really interesting technical optimizations, most of them are unwise experiments – and because the complexity of the industry requires specialization, most outsiders are very good at distinguishing between good and bad.

These experiments are designed to determine if their optimization is sufficient to get attention and ultimately surpass Bitcoin in terms of adoption and utility. However, each of them sacrifices one characteristic to optimize the other – there is no free lunch here.

These new chains with different trade-offs and optimizations (characteristics) mark a "standard" battle – the fundamental chain of the future of programmable money. Industry insiders and outsiders tend to focus on technology trade-offs as potential indicators of the programmable currency base.

Of course, this turns out to be a too narrow scope of assessment – history has repeatedly proven that standards are rarely determined by "best technology."

It turns out that the market was subsequently verified and Bitcoin was the “from 0 to 1” moment. Some of the newer chains offer minor improvements (from "1" to "1.1"), but most are only lower trade-offs (from "1" to "0.5") relative to Bitcoin.

In general, two thresholds must be met when evaluating the probability of any chain or currency that exceeds Bitcoin:

1. "Is your choice actually better than Bitcoin?" Most of them did not pass this test.

As a result, most of the new chains – many of them with shiny new "breakthrough" consensus algorithms – are equivalent to ghost towns: seemingly beautiful designs and buildings, but lacking organic demand.

Second, where are we going?

From horizontal competition to vertical construction

Although the previous period marked the horizontal battle to become the basis for supporting the future of programmable money, the market will continue to merge the first round of the victory agreement.

In general, even industry insiders greatly overestimate the possibility of the new chain surpassing Bitcoin.

In fact, this is not a game at all: Bitcoin is very likely to occupy most of the market share in the next 10 years. No one cares who is the second best email protocol after SMTP.

For most markets, there can only be one winner, and Bitcoin is far ahead – calculated by any indicator.

In order to make the competition chain more challenging, securities regulators in the US and elsewhere have made it clear that raising money and launching new chains/currencies is a legally suspicious claim – given that Bitcoin is already a Kind (unnecessary) supervision of the moat.

The dominant position of Bitcoin is reflected in the figure below. In a winner's first-mover advantage and network effect in most markets, imagine that any competition chain that exceeds Bitcoin at this point is objectively difficult and far-fetched. In short, Bitcoin has come a long way: just six years ago, even few people have heard of Bitcoin – and those who have seen this fledgling digital asset as a "tulip phenomenon."

By contrast, as of the spring of 2019, 89% of the US population had heard of Bitcoin at least, and the younger generation had tried it: between the ages of 18-34, 60% were familiar with Bitcoin, and 59% thought Bitcoin was " "Positive innovation in financial technology", 48% think "very" or "somewhat" may "most people will use bitcoin in the next 10 years", 42% think they are "very" or "somewhat" may be in the next 5 years Buy bitcoin. (Source: https://medium.com/blockchain-capital-blog/bitcoin-is-a-demographic-mega-trend)

3. Where should we go from here?

From here on, the building really started.

This is not to smash the efforts behind all the new chains that have been launched, but to emphasize that the next phase of construction will result in layers, protocols, applications and services that will actually be used in the next decade – and most of the chains will not be visible. Any meaningful economic traction (that is, "ghost town").

Development and construction activities will shift from a new chain that is not fully differentiated to a “stack” that improves and builds a winning agreement.

This phase has gone smoothly in many ways: Lightning Network is a second layer/protocol built on the Bitcoin network that facilitates fast, cheap, peer-to-peer bitcoin transactions. Similarly, dozens (and possibly hundreds) of companies and developers have built infrastructure, applications and services for Bitcoin. 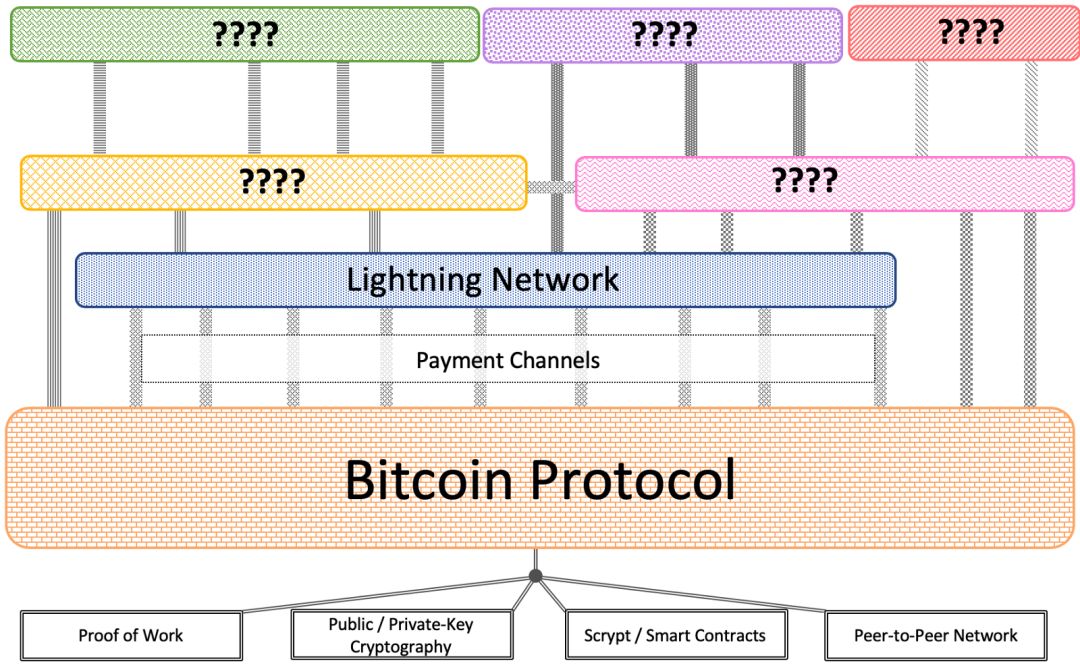 With the advent of this vertical structure, we will continue to see more supportive infrastructure emerges and a rich ecosystem of applications and services that will increase Bitcoin's range of capabilities as a programmable currency.

The industry began with financial assets (bitcoin) and financial infrastructure (the Bitcoin blockchain) and will continue to find the most utility in the (non-sovereign) programmable currency sector in the coming years.

Importantly, this shift will take years to realize: we are still in the entry stage of Bitcoin – which is why the exchange is by far the most profitable encryption company, just as telecom operators are the most profitable companies in the early days of the Internet.

Of course, these phases are not strictly sequential: although we are only in the first or second phase, the Bitcoin stack and its supported applications and services will simultaneously appear and accelerate into the construction phase.

Bitcoin has and will continue to experience many “stage shifts” in the coming years. In other words, Bitcoin will continue to shift from a “fluctuating and speculative commodity” to a widely accepted “weighted basis for programmable currency”.

With the advent of the Bitcoin stack, there is an important dynamic: the changes in the base layer are slow, well-designed, and cautious – when the value exceeds $10 billion, there is no "fun tinkering." Therefore, changes in the Bitcoin protocol itself require (almost) all major economic stakeholders to reach a consensus across the network.

In contrast, building bitcoin stacks has different dynamics: developers can quickly innovate and iterate because these are selective protocols, layers, applications, and services that don't expose the underlying network to risk and do not require network-wide consensus. For example, a lightning network may suffer a catastrophic failure, and the Bitcoin network will continue to operate as expected.

According to the design, Bitcoin itself is difficult to change, but anyone can freely build and innovate on the Internet. Therefore, while changes to the Bitcoin protocol itself are deliberately challenging and tedious, the speed and scope of stack innovation will be faster and broader.

Here's a rough analogy. Changing the jet engine in the middle of the flight requires extreme caution – but the risk of designing a new in-flight entertainment system is small. In fact, once the basic level of flight safety is ensured, the flight experience is improved, and entertainment and fresh food are better enjoyed, the attraction of the flight is increased.

Similarly, as people become more familiar with Bitcoin itself, the added functionality of the stack will drive wider adoption.

Ultimately, Bitcoin will provide fertile soil for vertical growth. As an industry venture capitalist, we look forward to investing in infrastructure, applications and services over the next decade to enable people to unlock the power of native digitally programmable currencies.

Special thanks to Derek Hsue and Aleks Larsen for their review and advice – and the analogy of "Ghost Town" by Brad Stephens).

"Slow" is related to the pace of innovation that many people are used to in software. In fact, the development of bitcoin is far from slow.