At 7:00 am on June 2, Beijing time, the B1JUNE conference was held as scheduled, and the Scallion APP was invited to participate. In just half an hour, Block.one announced four products:

Announced a partnership with Coinbase to launch educational products.

As the conference progressed, EOS presented a roller coaster market for a short time.

The most "efficient" conference in history: four products were announced in half an hour. As early as March of this year, BM and others have repeatedly revealed that there will be new news affecting EOS in June, and it is "the biggest news since EOSIO was launched" . As the date of the EOS First Anniversary Conference approached, speculation about this "big news" in the market continued to ferment, and investors' psychological expectations were greatly increased.

However, the release of this morning was only half an hour, and after the announcement of four products, it ended abruptly and the agenda was slightly compact.

The Shallot APP sent a message at the conference. The following is a review: 1. Release the social product Voice.

Block.one will release the Voice platform on the EOS public chain. Since Voice will operate on the EOSIO protocol, the interaction on Voice is open and transparent. All involved individuals, including users, content creators, and the platform itself are equal, with no hidden algorithms or opaque benefits.

Brendan Blumer, CEO of Block.one, said: "The design of today's social platforms is to benefit from using their own users. The content we create, personal information and interest are the most valuable information on social platforms. Now, the platform is Use this information to monetize rather than give back to the users themselves. The design of existing social products determines that these platforms need to be profitable in this way, and users will receive push messages filled with advertisements. The emergence of Voice is to change the status quo. ""

At present, Voice is online, users can participate in the test, the official website address: voice.com.

BM later added in Twitter that users do not have to pay for RAM, CPU, etc. In addition, the registration of Voice can get a free EOS account. 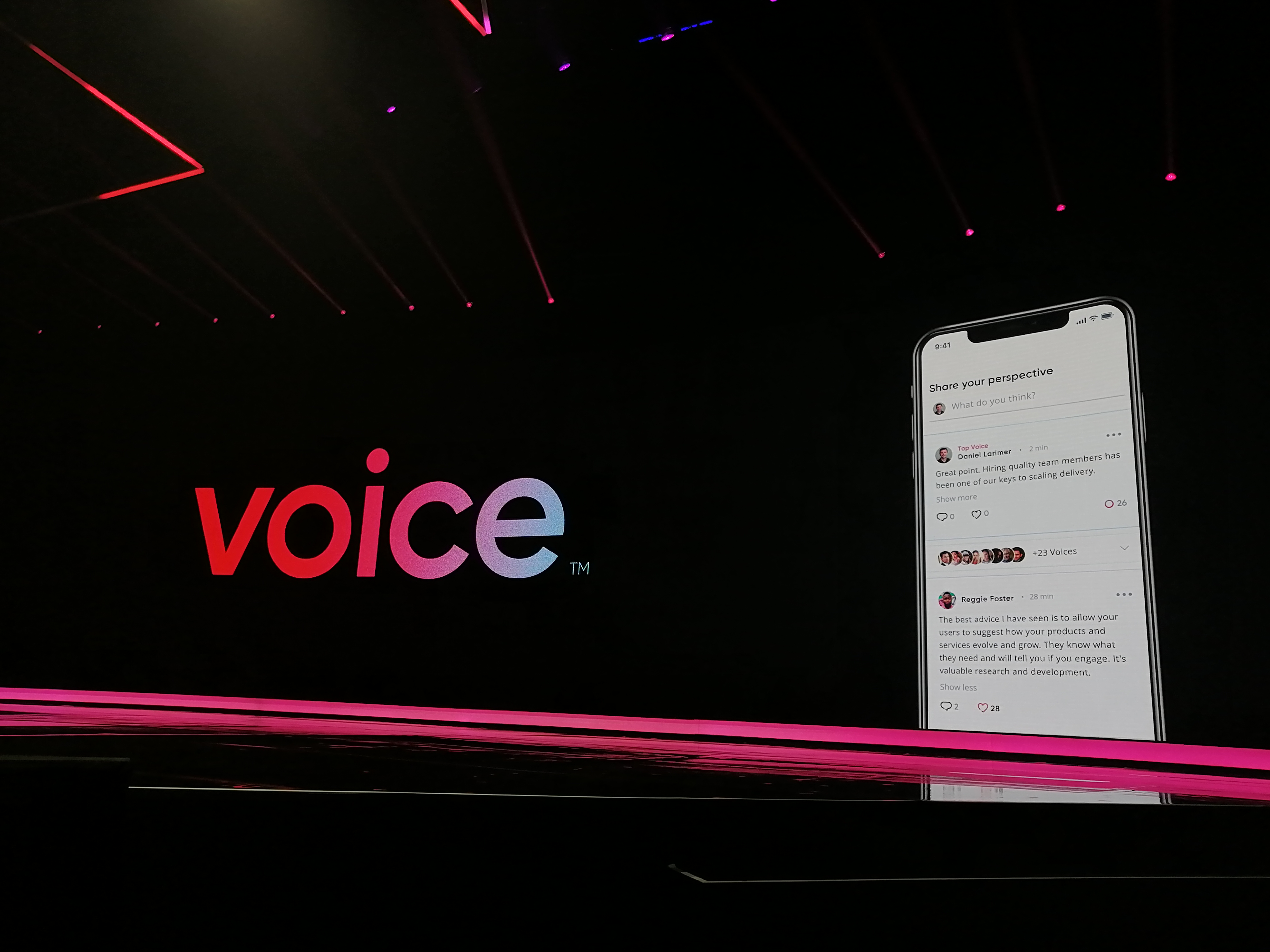 Compared to EOSIO 1.0, the EOS VM will increase the speed of smart contracts by a factor of 12. The EOS VM is a WebAssembly engine designed for blockchain smart contracts.

The release of EOSIO 2 made EOSIO the first blockchain protocol to adopt WebAuthn, which can improve the security and ease of use of EOSIO applications.

BM will later post that the EOS VM code will be released soon.

Block.one supports hardware security keys and accesses Yubico's Yubikey in EOSIO 2 for a higher level of security and privacy.

Block.one announced that it will work with Coinbase to popularize its EOSIO strengths, performance and other knowledge for its users through the Coinbase Earn cryptocurrency award program.

Scallion APP noticed that Coinbase was launched on EOS on May 31. This time, it will cooperate with Coinbase to launch educational products or help EOS to further explore the US market.

EOS fell 8% in a short time, the conference is really good?

Perhaps it was the nearly three months of development that allowed the market to digest this wave early; or perhaps because of Bloomberg’s "spoiler" in the early hours of the morning, which weakened the mystery of today’s big news. The B1JUNE conference "hurried" ended and the market quickly made In response, EOS dipped sharply within 20 minutes and once fell to 7.43USDT. 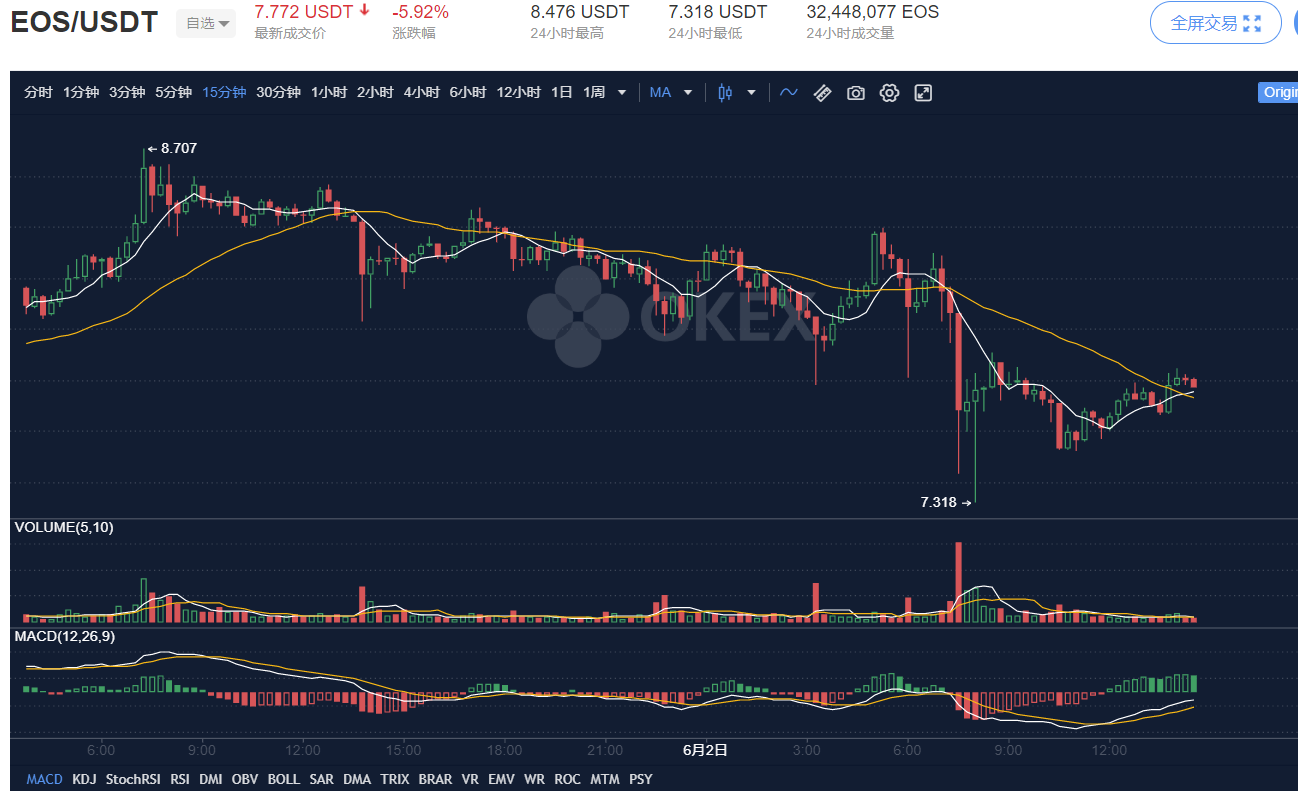 However, compared to the domestic spit sounds, Scallions found that foreign netizens had more positive comments on this conference, and many people have already downloaded Voice for the experience.

Some Twitter users said that Voice can introduce new users into the EOS ecosystem, and this product may change the rules of the game.

In addition, through on-site communication, Scallions found that developers generally believe that this conference is underestimated, and have high expectations for EOS 2.0 and 12×EOS VM, saying that it is expected to achieve a million TPS.

Rob Finch, CEO of Cypherglass, one of the EOS nodes, told the Onion APP at the press conference:

Social networking is a good entry point, and Voice has the opportunity to become a phenomenal application, which allows blockchain technology to enter the lives of ordinary people. We have always said that the blockchain world lacks killer applications, and Voice may be.

This is a gathering of EOS ecology, and we are delighted to see the ecology of EOS so prosperous. We are looking forward to EOS 2.0, and if we can disclose more roadmaps we will be ready.

The person in charge of a security company at the scene revealed to the Onion APP:

They are commissioned by Block.one to begin auditing EOS 2.0 code.

Winlin, a member of the BET team and a partner at BlockGo Technology, said frankly:

I am very happy to see the EOS VM related news, which is a meaningful step for EOSIO to truly support parallelization; but I hope that B1 can open the Roadmap, which is more convenient for community cooperation. For example, the BOSCore side chain, which is known for its technology in the EOSIO ecosystem, has already begun research on EOSIO parallel computing. If you can know the corresponding information and plans, it will be more helpful to community collaboration.

Source: Shallot APP. Copyright is owned by the author.

Yin Hao of Tsinghua University: Blockchain technology is the innovation of the underlying logic of the Internet