At 7:00 am on June 2, Beijing time, EOS held its first anniversary conference to announce the progress of new projects.

In addition to launching educational projects with Coinbase and launching EOSVM virtual machines, the EOS social product "voice" was unveiled at the press conference.

Voice is based on the EOS blockchain network developed by DAPP, officially produced by EOS. It is reported that voice can ensure that quality content receives more rewards, rather than using user-generated content to profit as traditional social networks.

The successive release of several new products did not benefit the EOS market for a short period of time. The short-term price of the currency plummeted from 8.2 US dollars to a minimum of 7.3 US dollars, a drop of more than 10%.

The one-year-old EOS is still young. After leading the super-node trend and pushing the DAPP big bang, EOS is weakening the label of “spinach public chain” and adding new footnotes to the application of blockchain with decentralized social products.

Since the official launch of the EOS main network in June last year, this young public chain has celebrated its one-year birthday. At the first anniversary of the warm-up, EOS released three products and one update at a time, and declared to the outside world that “the team is doing things”.

First, EOS and the digital asset exchange Coinbase released the education project Earn EOS to provide the public with opportunities to popularize and learn EOS.

In 2018, Coinbase launched the Earn learning platform, where users can receive cryptocurrency rewards after answering quizzes, completing tasks, and trying new decentralized protocols. Based on this birth, Earn EOS is similar to this, users can learn the course on this platform, up to 10 EOS rewards.

Next, EOS also announced a series of major updates to EOSIO software, launching EOSIO 2 and EOSVM virtual machines. EOSVM is a WebAssemly engine designed specifically for blockchain contracts, which is 12 times faster than EOSIO 1.0. EOS founder BM said that with the EOSVM running contract, the execution efficiency will be greatly improved.

Then, EOS launched the WebAuthn authentication service and a hardware product called EOS Yubico key. The former is similar to the EOS browser plug-in scatter, mainly used for authentication. EOS users can use the Yubico key to sign chain transactions via WebAuthn.

After the release of the above new products and software updates, EOS's much-watched "killer" application voice finally made its debut.

Voice is based on the EOS public chain network and has its own token voice token. Users create, share, discover, and distribute content on the voice, and they will receive token rewards. At present, the voice is online, users can log in to their website voice.com to participate in the test. 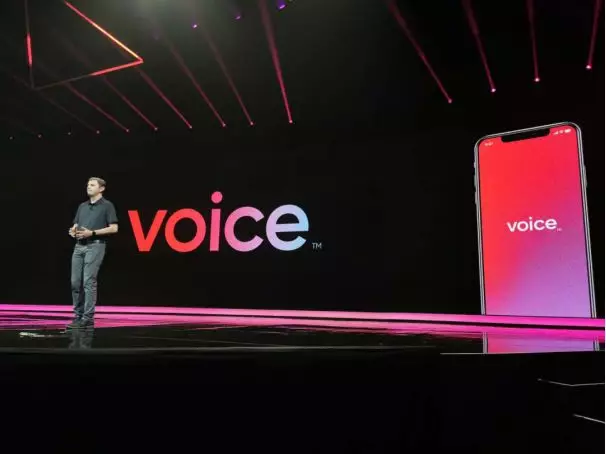 Block.one CEO Brendan Blumer (BB) believes that traditional social networking platforms have been using user-created content to profit, rather than giving back to users, while users have to receive push messages that are full of ads.

The birth of voice is to change this. According to BB, voice can ensure that quality content receives more rewards, and the proceeds are not taken away by the commercial companies behind it, but are used to promote community development. In addition, voice also said that it will encourage real users to be active on the Internet and actively attack robot accounts.

EOS rebounded after a 10% short-term decline

The entire conference was only carried out for more than an hour, and the content was also clean and clear at a glance. The spectators seem to have not had enough fun, and the press conference is over.

Many people commented on social networks, saying that EOS did not bring heavy upgrades, and the content was almost unexpected. “It’s a social currency.”

Weibo users "the beacon of your soul" evaluated the EOS conference "good pit", "waited for half a year, disappointing, less than expected."

Disappointment was reflected in the market price of EOS. During the press conference, EOS prices fell rapidly, falling from 8.2 US dollars to the lowest 7.3 US dollars, a drop of more than 10%.

However, in the opinion of industry analyst Andy, the decline in EOS is not unexpected. "EOS released a lot of positives in the early stage, which increased the expectations of investors and attracted a lot of speculative capital injection. From the perspective of the disk, the previous EOS increase was very fierce, which was a super-rising market, and the release was not particularly direct. Good. This will lead to the withdrawal of speculative funds, causing a short-term decline."

He believes that this does not mean that EOS's new products and upgrades are bad. From the content of the conference, EOS has increased the market education promotion expenditure, which encourages users to learn EOS through Earn EOS by rewarding tokens; it also greatly enhances the EOS contract operation efficiency, which is a necessary upgrade; It may also grow into a flagship social product in the blockchain industry, helping to change the way the EOS “betting public chain” views.

From the price point of view, EOS also stabilized after the short-term plunge. As of 4 pm on June 2, the EOS price hovered around $7.9, a strong rebound of 8.2% from the intraday low of $7.3.

During the “big move” of EOS brewing in June, the price of the currency was very bright. Since May 27th, EOS has been strongly boosted by the positive release of new products, rising from 6.3 US dollars to the highest 8.7 US dollars, an increase of 38%.

On May 28th, Block.one unlocked 9.8 million EOSs and allocated 3.3 million EOS to purchase RAM (transfer, smart contract running, etc.) in the EOS network, causing RAM to surge by over 200%, further stimulating The EOS currency price is lifted off.

REX allows users to lease their EOS tokens to DIP and other accounts that need to use EOS resources to obtain rental income. According to official data, the current user leases EOS, which is estimated to have an annualized rate of return of 1.37%.

BM confidently said that EOSIO has the RAM market, bandwidth lending, Bancor algorithm, domain auction and a variety of linked token designs. "The future of DeFi is at EOSIO."

EOS has made a lot of innovations in the main online line for a year.

From the very beginning, based on DPOS (share license certification mechanism) to carry out super-node campaign to solve the problem of low throughput and delay under the POW mechanism, EOS has gradually become the leader in the public chain field with its fast transaction processing speed. A lot of emulation.

With this advantage, the EOS DAPP ecosystem is welcoming. According to data from dapp.review, as of June 2, the number of DAPPs on EOS reached 530. In all 24h turnover rankings of public chain DAPP, EOS DAPP occupied four seats in the top five. According to BM, the current EOS network transaction volume accounts for 60.6% of the daily blockchain transaction volume.

After the voice is released, the DAPP matrix of EOS is expanded by category. It is worth mentioning that the voice user does not need to pay for RAM, CPU, etc., which will make this DAPP a natural advantage and lower the user threshold.

In the Internet world, Tencent has proved that "the socializers have the world", and EOS has made a wave of voices, and is undoubtedly looking forward to transforming the social ecology with decentralization.

After the first anniversary of EOS, the prototype of the “killer app” has been created, trying to prove to the public chain that DAPP not only has “spinach”.