Since last year, Tencent, Netease and other game manufacturers have begun to lay out blockchain games, including many popular mobile games. At the same time, the DAPP (decentralized application) market, which entered a low tide in the second half of last year, "rejuvenated" this year.

DappReview data shows that in the first quarter, the three main chains totaled DFP transactions of $3.6 billion, while the annual transaction volume in 2018 was only $5 billion. This has also driven the game DAPP to be favored by the capital market, and multiple platforms and game production companies have announced financing.

In a good market environment, where will the blockchain game go? Many practitioners said that the most market share is still a quiz game. Risk games with MLM and Ponzi investment nature still exist. With the efforts of game developers, the running logic of the important nodes of the game will gradually be realized by the blockchain technology, and there will be opportunities for full-chain games in the future. However, the landing of the full-chain game still has many difficulties.

The exploration of blockchain games by domestic big manufacturers is not the earliest. At the end of 2017, the blockchain game "Encryption Cat" developed by AxiomZen became the first phenomenal DAPP (decentralized application).

"The meaning of "Encryption Cat" is that the industry has seen that blockchain technology is not only a digital currency, but also a product simulation. The game also has considerable imagination." Yu Jianing, dean of the Fire Coin Research Institute, said.

This naturally attracts a large amount of capital and talents into the game class DAPP. During the period from February to March 2018, an average of 5 game DAPPs were launched every day. The types of games were mostly cute pet games. The games of encrypted dogs, encrypted pigs, horses and rabbits, which are highly similar to "Encrypted Cats", appeared one after another.

At the same time, the market has become a mixed bag, and competition games, pyramid schemes, and Ponzi schemes have appeared.

A quiz game represented by Etheroll can set different odds for bets. DAPP, a high-risk "drum-and-drum" class, also appeared. Most of these games have a fund and a pyramid scheme. Games often require the next family to purchase virtual assets from the previous home at a higher price. The proceeds of the difference are taken away by the home, and the developer collects the handling fee. "As long as it is not the last one, the people in front can make money, so this kind of game is all the rage," Yu Jianing said.

The most representative case is the Encrypted Country. According to DappReview, a DAPP data analysis website, this game created a 7-day 4.6 million ETH transaction flow record during the Spring Festival last year. It took more than 7 days to exceed the total transaction amount of the encrypted cat for 4 months. However, after the price was raised to 1000+ETH, no one took the order. It is conceivable that the last bought player "pays" for the game.

After the player gradually became tired of the "Drums and Flowers" game, PoWH 3D climbed to the top of the DappReview leaderboard. The core mechanism of the game is that the more players coming in, the more dividends the previous players receive. In order to gain high profits, speculators entered the game in a crazy way. In April last year, the contract balance was up to 20,000 ETH, and the number of daily active users reached 3,000. Subsequently, PoWH, PoWC, PoSB, PoJ, PoWTF and other "high imitation versions" appeared.

An investor who asked not to be named said that in addition to the blockchain games such as "Encrypted Cat" that emerged at the beginning, the late-stage quiz, pyramid scheme, and Ponzi scheme games actually have nothing to do with the game. It is operated by high-risk funds under the banner of the blockchain.

Currently, the proportion of games for quiz, pyramid scheme and Ponzi investment is still higher. According to DappReview data, as of June 1 this year, the number of quiz DAPPs was the highest, reaching 299. The number of risk-based DAPPs with MLM and Ponzi investment properties was 32, and the total number was 331. The real game class DAPP is 85, accounting for only 20% of the total. From the daily trading volume, the top ten DAPPs of the day were almost covered by quiz games.

“In the second half of last year, the blockchain game industry entered a trough,” Yu Jianing said.

The market "rejuvenation", the full chain game has technical conditions

The big environment is getting better, and the game class DAPP is also showing a good trend. The blockchain pan-entertainment platform Unitopia, blockchain game company Kronoverse, etc. have heard the news of financing.

"The next stage is the important logic of the game. For example, the key logics such as stepping on mines, opening treasure chests, synthesizing and building props and equipment, etc. are all implemented in the blockchain. From the technical support point of view, this stage can be fully realized. Kevin.Yin said.

The etheric legend that was launched last year can be seen as a representative of this stage. The core logic of the game is all implemented by smart contracts. According to the data records of DappReview, the game has been updated five times in total, and there are 14 contracts in total. The total contract code is over 8000 lines. This is very rare in all current Ethereum games.

Kevin.Yin said that the final stage of blockchain game development is the full-chain game, that is, all the logic of the game, except for material, audio and video, is expressed by the smart contract on the blockchain.

At present, the industry consensus that the reporter learned through interviews is that the whole chain game has not yet been developed. However, technically, the full-chain game has birth conditions.

For the final stage of the development of blockchain games – the full-chain game, Jia Ke introduced its mode of operation: like the birth of Bitcoin, you need to rely on the "free join, free exit" community, through the players in the community Cooperate to complete the game. It is the "community" operation of the whole-chain game. Many experts said that in the future, big manufacturers cannot and will not participate in the development of full-chain games.

Liu Mengxi said that the whole chain game is designed by the player and does not belong to any company. This means that if the big factory wants to participate in it, the first thing to do is to make a huge update to the game's entire charging model. However, in the current situation, large factories can already earn a lot of money, and there is no need to have the motivation to carry out such disruptive innovation.

“It’s impossible for a big factory to transfer the ownership of the game to the players.” Jia Ke thinks that it’s not easy for the whole chain game to achieve a monthly income of hundreds of millions. However, this figure is just for the general mobile game of Dachang. Go to the pass line. Therefore, "they don't see this benefit."

DappReview CEO Niu Fengxuan believes that developers and gamers may exist in the community. When some nodes are delivered to the KOL in the game, some of the benefits of the game maker will be highly consistent with the interests of the game community. The loyal players will spontaneously maintain the balance of the game, help the developer to acquire the user, and extend the life cycle of the game. Build the entire community.

“The specific step is that if the player is optimistic about a game, then the player can actively help the game to update the code. If other users in the community also approve it, it will be updated accordingly. The player will be rewarded for the code being used.” Yu Jia Ning said.

Yu Jianing believes that this will change the organizational form of the game industry. At present, the biggest problem in the game industry is that the channel is too strong, and the true creative person, that is, the studio is in a weak position. The launch of the blockchain game allows every player to promote the game, and the channel will move from the current concentration to the decentralization, that is, the community is the channel. "This change is happening."

Alphaslot Chen Ruiwen once said that from the perspective of the entire ecosystem, the blockchain will encounter an obstacle that many people have not figured out – regulation. “Because the blockchain is now an asset concept, whether you apply the blockchain to the game or the assets that are applied to the game become real value, the regulator will always be ahead.”

Ripple's Product Director: Researching an XRPL-assisted project to donate MP4 directly to the creator in XRP 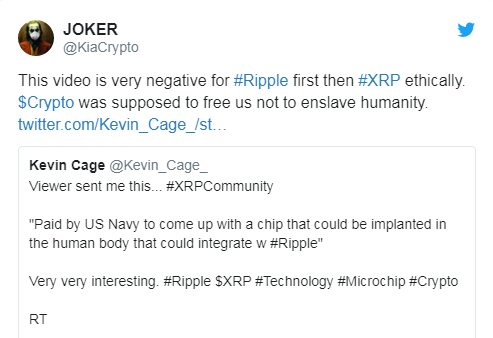 Solari President: The US Navy sponsors the development of implantable microchips compatible with Ripple