Who has the most loyal users in Defi products?

Among all current Defi products, MakerDAO has the largest user base. Second, the second echelon may be Compound, Uniswap, Argur, and so on.

Previously, the Orange Book discussed the different types of Defi products that different users would choose to use in "Pantera Capital: The Investment Logic of DeFi Products in My Eyes", but in the end left a question: Where do these users come from?

There are some speculations that Defi products may work through some cooperation, similar to Coinbase's cooperation with Compound, which is equivalent to turning these people into potential users of the lending platform when new users enter the market (buy cryptocurrencies with Coinbase).

Today's article analyzes the coincidence between Defi products from a data perspective, explores the mutual diversion between different Defi product user groups, and indirectly analyzes the general path of most users using Defi products, which is very interesting.

The following is the translation of the original:

We conducted some research on the user base of 4 Defi products. With the network diagram, we can see the overlapping users of 4 platforms (MakerDAO, Compound, Uniswap, Argur). 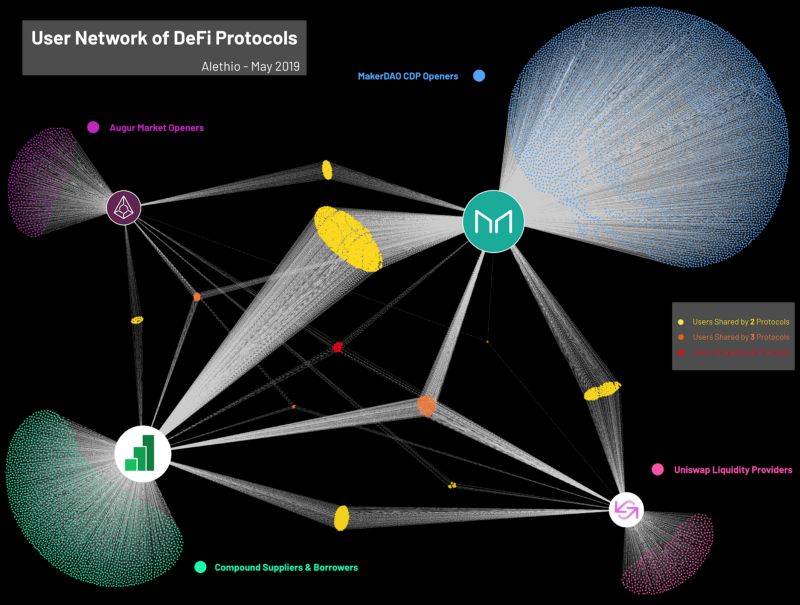 With different color markers, we can see that the 4 largest clusters are separate user groups for each product. This part of the user group, their address only interacts with the only DeFi protocol. As can be seen from the figure, MakerDAO is dominated by blue clusters, followed by Compound represented by green clusters.

In addition, if the user appears on multiple platforms, the nodes in the figure are marked in yellow, orange, and red. For users who appear on both platforms at the same time, we mark them as yellow in the figure – Compound and MakerDAO have the largest number of co-users, more than 1000 (that is, they have both opened Maker CDP and are loans on Compound). /Borrower). This shows that the relationship between the two protocols is very close, both in terms of the potential usage scenarios or the direction of the token flow. For example, a token borrowed from Compound may be traded or replenished with liquidity in the MakerDAO and DEX markets.

In addition, we have reason to believe that Compound and Maker are the two companies that are most closely connected, because their functions are similar to the lending platform, and the overlap between Augur and other companies as a predictive market is not so obvious.

For orange nodes (users that appear in both protocols), we noticed that the central cluster has approximately 240 nodes. This means that there is a certain amount of tokens that achieve liquidity through Uniswap. Now, we will delve deeper into the details of the data to study the behavior of these users.

In order to make the above network map more visual, we first look at the users of each platform through two indicators:

Take Compound as an example. As of May 10, the platform had a total of 15,637 credit transactions with 3,604 addresses. The specific breakdown is as follows:

Please note that the number of addresses involved is not equal to the sum of each different address. We can see that there are 548 addresses (3601+551-3604), which is composed of users who perform both activities.

To sum up, the data set used this time was a total of 39,100 transactions completed by 11,194 different users. There are 10 common users on 4 platforms.

Let's first take a look at the user overlap of different platforms.

A total of 11,466 users – 10,164 different users => 1,302 common users, equivalent to 36% of the total users of the Compound. This means that more than one-third of users, while using Compound (whether borrowing or lending), open Maker's CDPs accordingly.

There are 8,946 users-8,525 different users => 421 common users. Among the 1,084 different users who interacted with Uniswap by providing liquidity, their co-users with Maker accounted for 38% of the total number of users.

There are 4,243 users – 4,177 different users => 66 common users. In other words, less than 2% of Compound users are using Argur's forecasting market, and about 10% of Augur users have interacted with Compound.

Let’s take a look at the overlap of the three layers of users.

To better understand the meaning of common users, you can analyze the time users spend on these platforms and try to answer the following questions – how are users introduced to these DeFi platforms? What are their motivations for using defi products, and why are they staying? Is there a common use of "paths" for users who use the above four protocols?

Of course, since Maker has the longest creation time and it seems that the user base is the strongest, we predict that Maker will be the first choice for most users.

It is not easy to analyze the common users between the three platforms, but fortunately, there are only 10 users in the four platforms, so it is convenient to analyze. We looked at the interaction of the 10 addresses on the platform and found that 8 of them had the first interaction with DeFi between February and November 2018, while the other two were in January 2019. occurring.

Surprisingly, five of them started with Augur, four started with Maker, and one started with Compound. None of the addresses shared by the four protocols is the first to use Uniswap – which to some extent indicates that at least in the use path of DeFi "core" users, Uniswap will be late in the process. one stop.

Now that we've discussed all the possible overlapping users between these platforms, it makes sense to look at how many users these platforms can have.

There are currently 6,347 users using only the Maker platform. This number is quite high considering the number of users that overlap with other platforms. These Maker's loyal users account for 80% of the total number of users.

Compound has 2,143 exclusive users, which accounts for about 60% of their total user base.

The 515 liquidity providers on Uniswap (47.5% of the total) did not interact with other agreements.

The 507 forecast market creators have only used the Argur platform, accounting for 80% of the total number of users on the platform.

We can see that among the four platforms, Maker and Augur have the most “loyal” users. This is not difficult to explain: they are the largest and smallest user base in the four protocols. At the same time, it is also attributed to Augur's forecasting market usage scenarios and the interaction requirements of other protocols are not many, the common point is not obvious. Therefore, to some extent we can conclude that Augur users may not be interested in using other platforms.

Writing here, there seems to be some inadequacy, although the mutual diversion between different platforms can increase the user base for each other, but compared with the Internet financial lending platform/product acquisition users, Defi is still difficult to achieve in the short term. The scale of user growth.

"Where can more users come from?"

This issue is worth exploring.