Sun Yuchen, a Chinese entrepreneur in the 90s, announced that he had won this year’s Buffett Charity Lunch at a price of $4.57 million, or about $31.58 million. Since Sun Yuchen is an entrepreneur in the digital currency field , Buffett has always been a celebrity who criticizes Bitcoin, adding more attention to the lunch. However, Buffett accepted it and expressed his expectation of the arrival of this lunch.

Regarding Sun Yuchen, I think it is also a big controversy at present. Wang Xiaochuan, CEO of Sogou Company, has publicly said that Sun Yuchen is a liar. I think this is a bias, Wang Xiaochuan and Sun Yuchen’s differences. I personally think that there is a difference between mathematics and historical philosophy. It is the disagreement between Tsinghua University and Peking University (just kidding). Wang Xiaochuan was recruited into the Computer Department of Tsinghua University in 1996 for winning the gold medal in the International Olympic Informatics Competition. Sun Yuchen was the first prize winner of the 9th New Concept Composition Competition and was admitted to the History Department of Peking University. 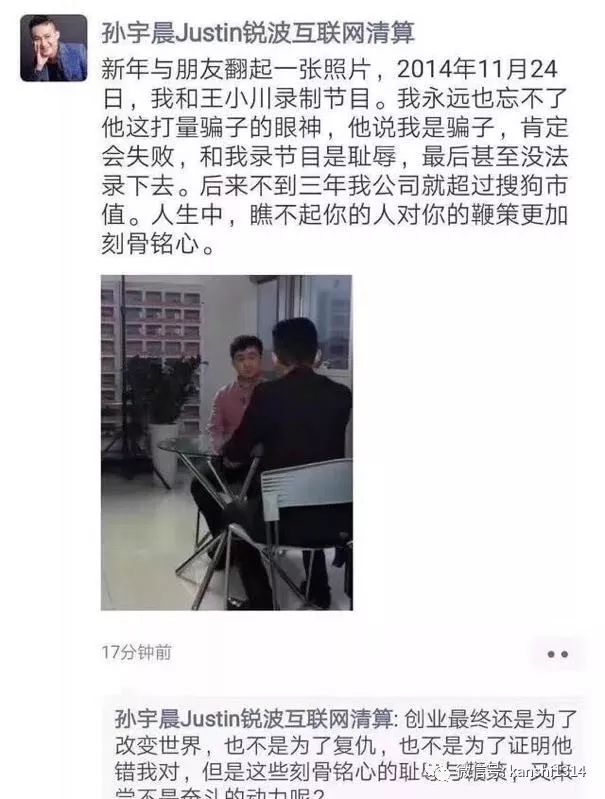 At present, Wang Xiaochuan is the CEO of a listed company, and the digital currency released by Sun Yuchen has been publicly traded. Therefore, both are public figures, all of which are related to the public interest. We can openly question and discuss it openly.

But I am not going to analyze who is more bullish, who is a liar, who is not, I am just here to give you some thoughts. The way of thinking of these two people is actually very representative in the commercial field. Wang Xiaochuan is almost a mathematical determinist, and Sun Yuchen is completely obsessed with the maneuverability of human beings, that is, the "Spiritual History", respected The king is defeated.

Personally, human change, from social, commercial, and even national levels, stems from the extreme play of these two types of people, as well as the alternating influence.

Judging from the commercial market value of the two jurisdictions, Wang Xiaochuan’s Sogou is 11.5 billion yuan, and Sun Yuchen’s cryptocurrency market value is 15.6 billion yuan. It can be said that it is difficult to distinguish the winners and losers from this aspect. But I am not here to discuss who is more meaningful in entrepreneurship and who is more valuable in business. Because in the process of subversive changes in the business logic of human beings, there are always many stories to be interpreted, but these stories, like the waves in the sea, are fleeting. If you stay on such waves, it is really Waste your life.

Today, what I need to discuss with you is that the field of cryptocurrency has gradually become the focus of attention from the cracks, why can it carry such a big bubble, so that a 90-year-old can take out millions of dollars. Come and have lunch with Warren Buffett.

In fact, Sun Yuchen does not have much relevance to bitcoin, cryptocurrency, and blockchain technology. In order to let everyone give up the attention to hype, I will only give an example here.

Chen Ou, the founder of Jumeiyou, has already studied at Nanyang Technological University (global ranking higher than Tsinghua University) with a full scholarship at the age of 16. He then earned an MBA at Stanford University and returned to China in 2009, quickly becoming a post-80s youth in China. The entrepreneurial role model, twice in the Forbes Chinese version of the "China's 30 under 30 years old entrepreneurs list", and won the "2014 China Internet Top Ten People" title, 2012 Chen Ou for the company "I For the endorsement of the series, the series of advertisements caused a strong resonance between the 80s and the 90s. In Sina Weibo, the "Chen Ou" was imitated. Sun Yuchen and Chen Ou's popularity at that time may be a few orders of magnitude worse. Chen Ou’s current number of Weibo fans is 44 million, which is 40 times that of Sun Yuchen.

In 2014, Jumei Premium was officially listed on the New York Stock Exchange, and its market value once exceeded $5 billion. Chen Ou became the youngest listed company CEO in the history of the NYSE for more than 220 years . But do you know that since 2014, the stock price of Jumeiyou has dropped from the highest of 39 US dollars to the current 2.4 US dollars, a drop of more than 93% . How many leeks are cut off, may only be known by the people who have been cut. 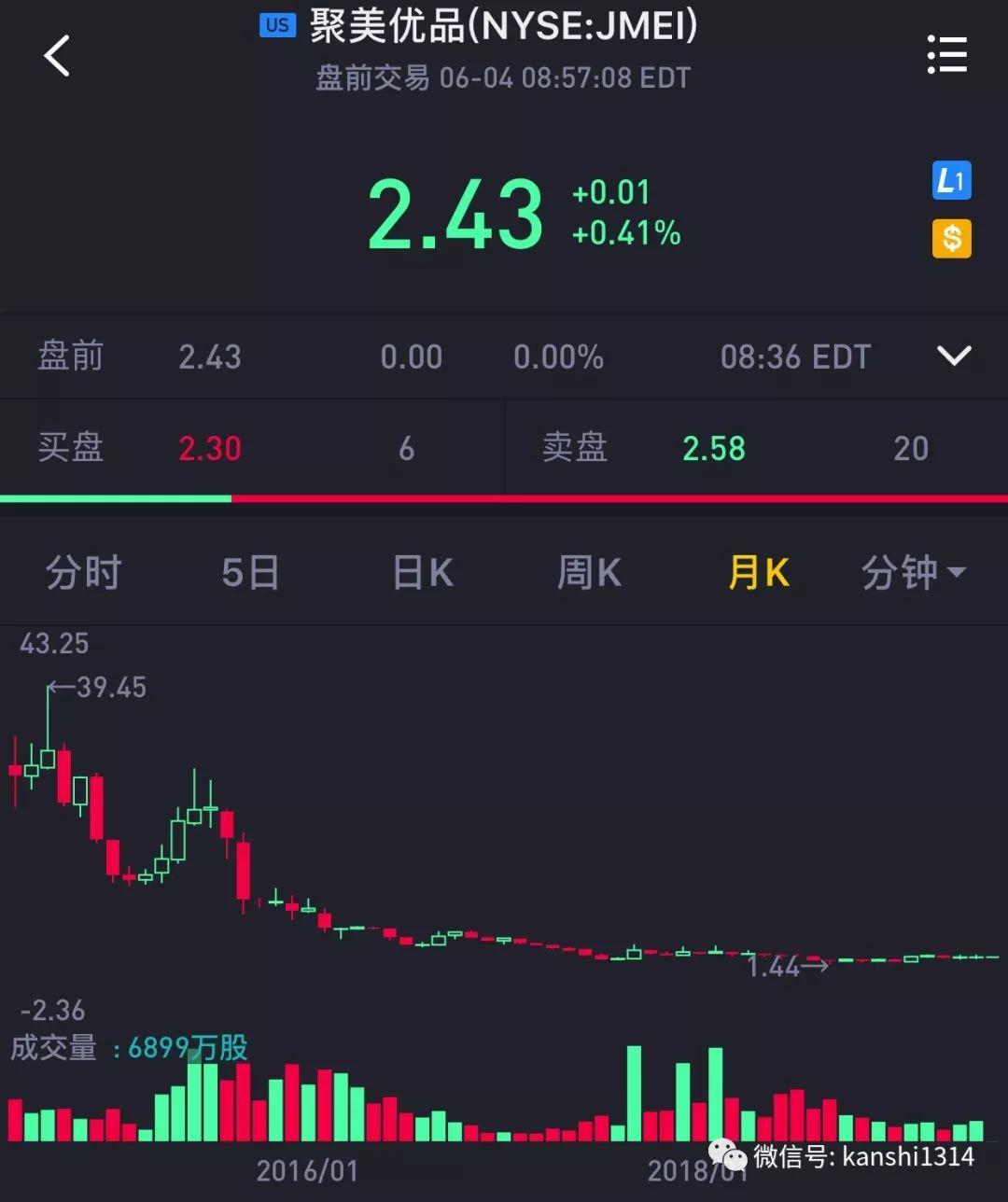 Jumei Youpin is an online shopping platform, but it does not represent the online shopping industry. In recent years, the market value of Jumeiyou’s share price has soared, Amazon’s market value has soared, and Alibaba and Jingdong have continued to grow, so Chen Ou And Jumeiyou can't represent anything. Just as Sun Yuchen can't represent Bitcoin and blockchain, those who mistakenly believe that Sun Yuchen represents cryptocurrency and blockchain, and participate in Buffett lunch is a contribution and proof to the blockchain or cryptocurrency industry. It is an excellent embodiment of the project, and then do Some people who make certain investment decisions are actually investors who do not have independent thinking ability. I don’t know if I will be cut off, but I don’t know how to invest.

The development of the cryptocurrency industry has little to do with the many blockchain business models we have seen so far. It is not necessary to use a knife to kill chickens. Blockchain is a type of printing that you can use to print promotional messages, print beautiful pictures, and print a variety of paper contracts, but the most valuable printing must be used to print money. of.

Compared with other sciences, or between the planned economy and the market economy, there may have been conclusions, but on the currency issue, human beings have just begun to practice.

The Austrian school's contribution to the entire economics is enormous, but in the view of its representative Mises et al., only the restoration of the gold standard, and the pure gold standard, let gold limit the impulse of the government to issue money, can fundamentally solve The purchasing power of money. The currency school Friedman and others believe that there is no need to revert to the gold standard, but the currency issuance increment must be fixed in the form of law, such as the imposition of currency issuance into the constitution, so that no one can interfere with the issue of currency circulation. The Keynesian school believes that money is actually a variable that can be adjusted and created. Income and interest rates can affect the demand of money, and then create money according to demand.

The discussion of the currency issue has not been concluded yet, and it has become increasingly fierce. This is a huge blank area still existing in economics. And I personally think that the reason is that the development of technology can't keep up with the thinking of economists. In recent decades, in many fields, as long as everyone dares to think, some people dare to do it, but the money market has been thinking for more than a century, but no one can do it.

The law does not allow one aspect, but more is that it does not have the ability to break through. There is a problem that should not be reversed. The earliest banknotes were issued by private banks. Since private individuals could not create a more credible currency than gold, they later had a monopoly of government. With the disruptive development of technology, many premise will be broken. The money market, I personally think is the world's largest untapped business model in the future, because the currency itself is a commodity.

The cryptocurrency uses blockchain technology to solve Mises and Friedman, as well as all the problems mentioned by Keynes. Mises supports the gold standard because only gold is unforgeable, rare, and empowered. The impact is small and the fairest for traders, which is the key to stimulating trading and improving production efficiency. And this, encrypted digital currency, such as bitcoin, has already done. 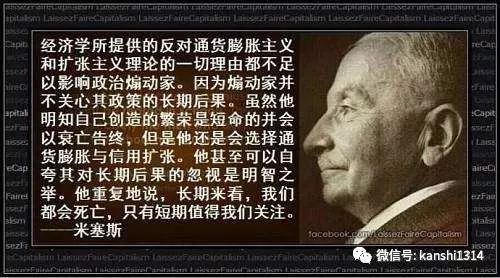 As for Keynes's theory, it is actually talking about the price of money. This problem can be solved by service (interest) and competition (exchange rate). It also includes the theory of currency competition proposed by Hayek, which can become a reality in the cryptocurrency market. Because there are no thresholds and barriers to issuing decentralized, marked, anti-counterfeit, divisible, standardized, global, aggregate, and incremental currencies that can be fixed by technology, this gives money The free competition provides all the technical conditions.

The development of mankind for hundreds of years is inseparable from the support of theory. Most of the programs of politicians come from the theories of sociologists and economists, so the future changes in the money market will be history. Sexual, but also toward the expectations of the various economists.

When Nakamoto discovered the bitcoin, it was the time when the US economy and the US dollar were seriously questioned in 2008. When he replied to the question "You can't find a solution on the political issues of cryptography," "Yes, but we can win a major battle in the arms race and gain new areas of freedom in a few years. The powers are good at cutting off the head of a central control network like Napster, but like Gnutella and Tor. The pure P2P network seems to hold its own network."

From the current situation, the competition in this field is not a competition for new business models, but a competition for money. How long is the life of the US dollar? We have no way of knowing it for the time being, but the US dollar must have a long life. Just less than 50 years after leaving the gold standard, the United States has developed to the point where it will never be able to repay 22 trillion US dollars of public debt. The guarantee of the dollar is the income of the US government, so from a technical perspective, the dollar has gone bankrupt. In the future, the dollar's credit guarantee may only be left in the aircraft carrier formation. When the world loses security to the American military, the dollar will have to accept the fate of being replaced.

Keynes said that we should pay attention to the present, because in the long run, we are all dead. When the cryptocurrency can play a global role, many people may feel too far away, so pay attention to the present, the dollar is still the world currency. But don't forget that in 1944, Keynes was trying to save the position of the pound and proposed a plan for super-sovereign currency. However, it was not approved by the US authoritarian regime. In the end, 44 countries agreed to adopt the US representative program, and the dollar replaced the pound. Two years later, Cairns, who was only 63 years old, died in the worry of the country and the people. As a world-renowned master at the time, Keynes did not stop the decline of Britain and the British pound, because the strategic failure was tactically irreparable. Whether people should pay attention to the present or think about the future, the answer is obvious. 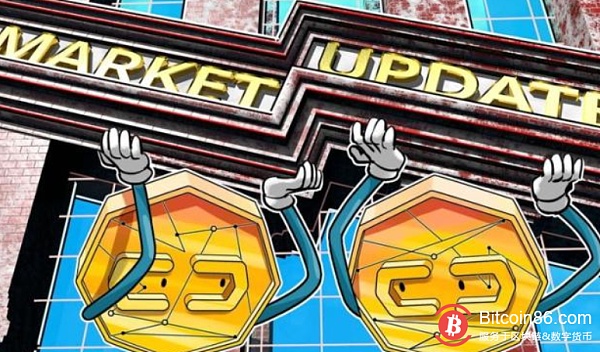 8BTCCI and 8BTCVI continue to fall, the main force continues to be under pressure, the market callback strength is attenuated

Discussion on the token model: Is the token price related to the adoption phase?