Tom Lee of Fundstrat Global Advisors believes that the fair value of Bitcoin is about $14,000. The fund's research director and managing partner also said that the past bitcoin whales have returned and began a large-scale repurchase due to a shift in market sentiment.

Once the bitcoin whale has returned

On Thursday, Lee interviewed CNBC and commented on the recent surge in the price of Bitcoin, the world's top cryptocurrency. He said:

Bitcoin has experienced tough times in most of 2018 and 2019, and it has been steadily climbing. From the information we can collect, this is because there are many positive things happening. Many of the former Bitcoin whale wallets are buying bitcoin.

Earlier this year, Lee published Fundstrat's outlook for 2019, including a reversal of the overall market trend. He believes that developments like Bakkt and Fidelity's hosting solutions will push BTC prices further in 2019.

In addition, he pointed out that Bitcoin is becoming more and more effective in economically volatile regions around the world. In countries such as Venezuela and Iran, people are turning to Bitcoin and other cryptocurrencies.

According to previous reports, the US government is considering prohibiting Visa and MasterCard from facilitating payments in Venezuela. These moves will only encourage more people to accept bitcoin.

When talking about the price of Bitcoin, Lee reiterated his previous view that Bitcoin is still trading at a price lower than the actual value. The Fundstrat managing partner said that the fair value of Bitcoin is about $14,000.

According to Lee, BTC's current price is less than 40% of its fair market value. For him, the accurate valuation of Bitcoin includes the active address and activity of each user, which means that the value of Bitcoin should be about $14,000.

The valuation of the Fundstrat research director is also based on the fact that during the bull market, the price of a commodity should be 2.5 times its breakeven point. However, this is assuming a BTC mining cost of between $5,000 and $6,000.

How high will Bitcoin go?

Since the currency market soared on April 2, 2019, much of the discussion has focused on how high the BTC will be at the end of the rally. Despite the fall in prices on Thursday, the price of BTC is still around $5,000, which is a support.

BKCM's Brian Kelly predicts that the price of BTC may rise to the range of $6,000 to $6,500. For many commentators, the question is, since Bitcoin has fallen below $4,200, what is the price of the new psychological resistance. 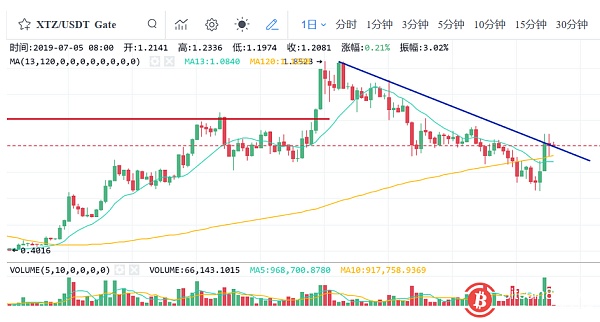 Agricultural Development will use the blockchain and other technologies to provide online integrated financial services and online lending to the hog industry.

Data show: BTC fell below $10,000, and the volume of transactions related to mainstream exchanges soared