Facebook may release its cryptocurrency white paper on June 18, which indicates that the giants may enter the market faster than we think. Now the hottest thing in the capital market is the global interest rate cut. Recently, the central bank of India has lowered the benchmark interest rate again. The core of the interest rate cut is that the United States will not fall. In fact, the current situation in the United States does not support the interest rate cut, because of the well-known reasons, the US price. In the future, it will rise. Under this circumstance, the US rushed to cut interest rates is no different from the fire. Unless the trade war has eased, everyone will drop their breath. If the trade war has eased, I think it will be a bearish negative for the cryptocurrency market, and it will face a bearish and mad pressure in the short term.

I don't know if you found out. The most recent market is concentrated in the night. After the low level finishing in the day yesterday, there was another wave of plunge in the night. In fact, it also shows the short-term market, and there are long and short differences in this place. Despite the mid-term mid-term gap in the mid-term, the short-term market clearly showed a long and short contest in this place. Therefore, there will be a sharp-selling rebound or a sell-off in the market. This kind of market is mostly a game phenomenon between the main forces. As our retail investors, it is better to wait for the market to give us a clear signal.

BTC once again jumped underwater in the early morning, but LTC's pull-up prevented the further decline of the target. The current trend is limited to a small double bottom. The volume of the breakthrough of $7,850 can confirm that the small double bottom is effective and will continue to rebound and test the $8,000. The pressure at the place, the pressure of 8,000 US dollars is relatively large, it is difficult to break through without the volume, pay attention to risk.

ETH ETH has already stood on 5 antennas, but the 5 antennas are not turning upwards and still exert pressure on the price of the currency. The macd indicator continues to run downwards. Now, after standing back to $245, the ideal state is like the re-testing of the target. With a pressure of $260, the individual tends to be unable to stand back and eventually has to test the support of $225. 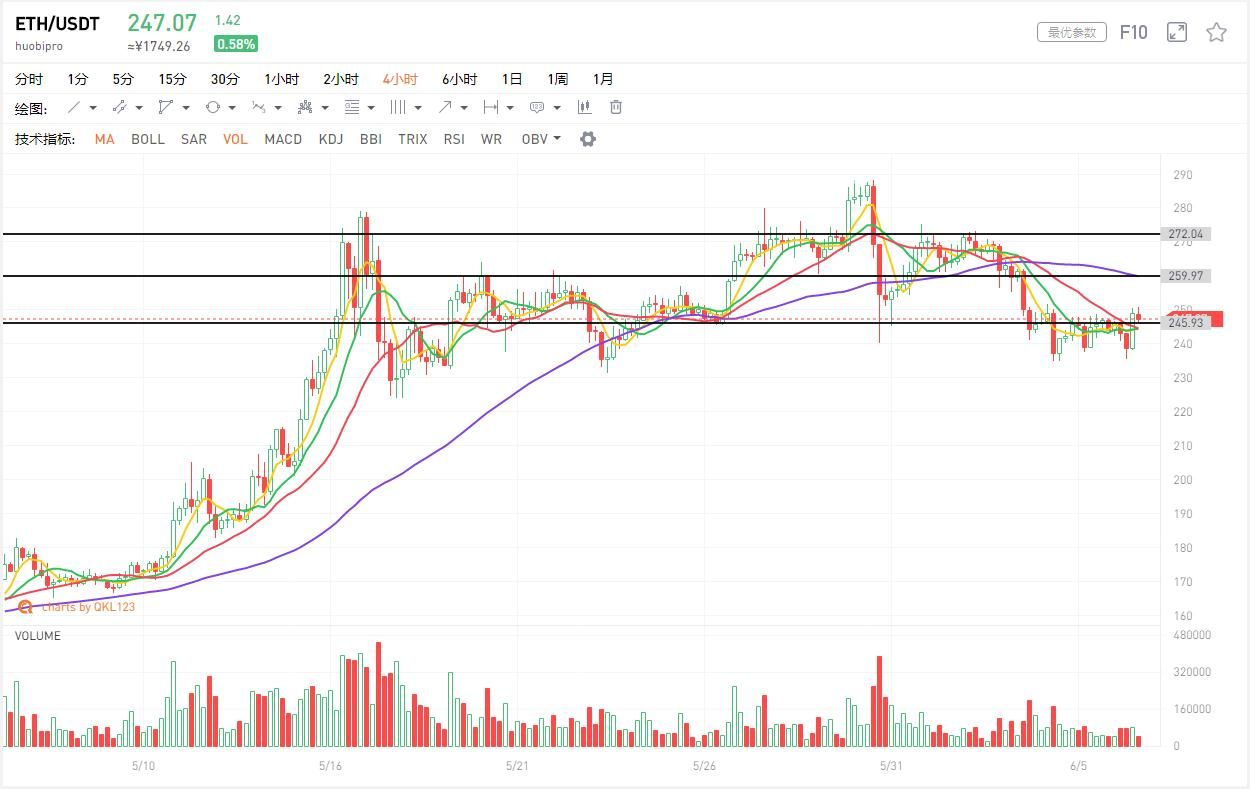 XRP received a Zhongyang line, which reversed the Yinxian line on June 4, and the rebound trend was strong, but now the 5 antennas are still running downwards. The trend of the target is more like a triangular finishing trend, with other targets. They are not the same. The transaction volume of the anti-Baoyang line is relatively small. The crisis at the M-head has not been lifted. Only a strong breakthrough of 0.48 US dollars can resolve the M-head crisis. The overall market is weak, and the possibility of a strong breakthrough of 0.48 US dollars is very small. risk.

BCH followed the market out of the deep V, but the target did not successfully return to the 5 antennas, 5 antennas also kept the downward trend, the mid-term downtrend remained unchanged, here has been a continuous sideways for a few days, the volume is getting smaller and smaller, it is likely Is a falling relay form, pay attention to risk. 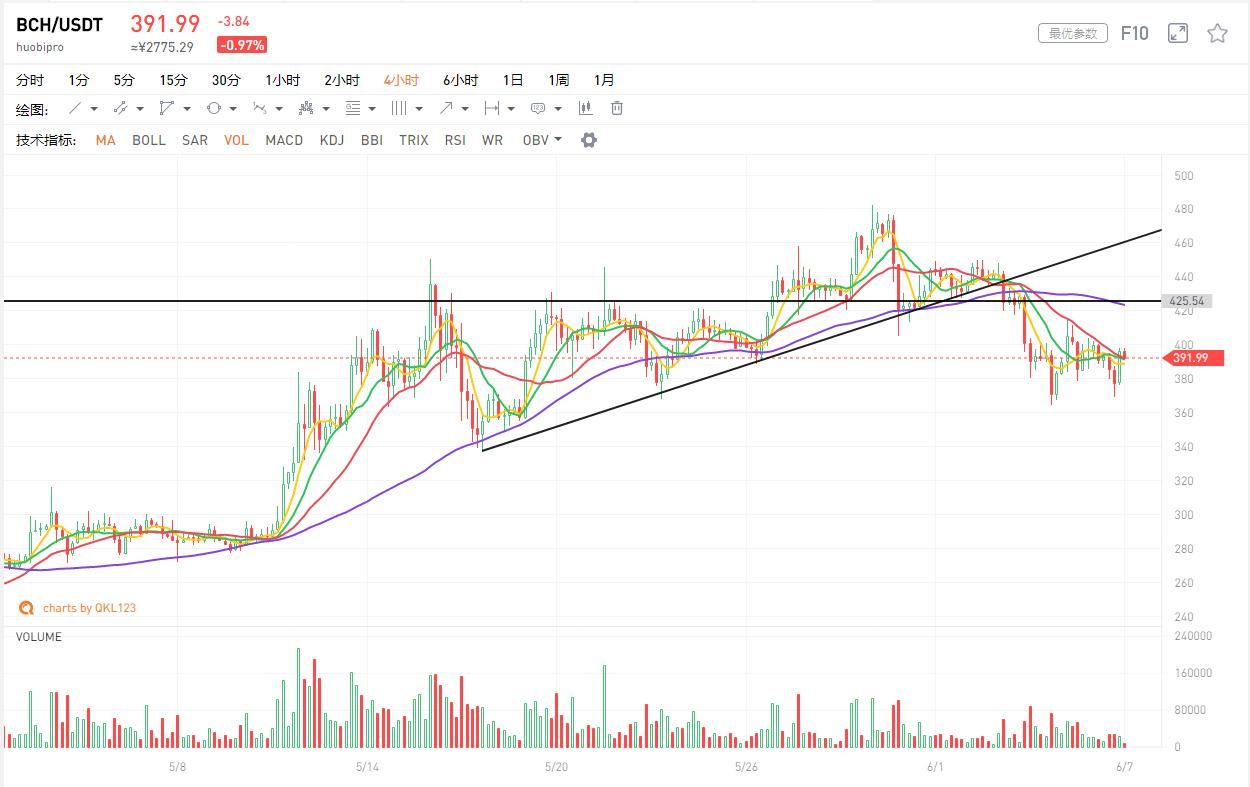 The top 10 cryptocurrencies rebounded today by LTC and XRP. According to TokenClub data, LTC is currently ranked first in the currency list, with 44,049 visits within 24 hours and BTC ranking second, with 24 hours of visits. 18920. LTC has regained the pressure of 110 US dollars, but we can see that the market reaction is not positive. I think the rebound of the target may be limited. There may be pressure on the vicinity of 113 US dollars. Personally, it should be cautious. EOS can be seen from the daily chart. The target is a standard apex trend. The bears are under a lot of pressure. For the time being, they will not be in a position. Personally, the target will continue to test the support near 5.8 USD. Repeatedly oscillate the right shoulder portion of the head and shoulders in the range of $5.8-6.5. 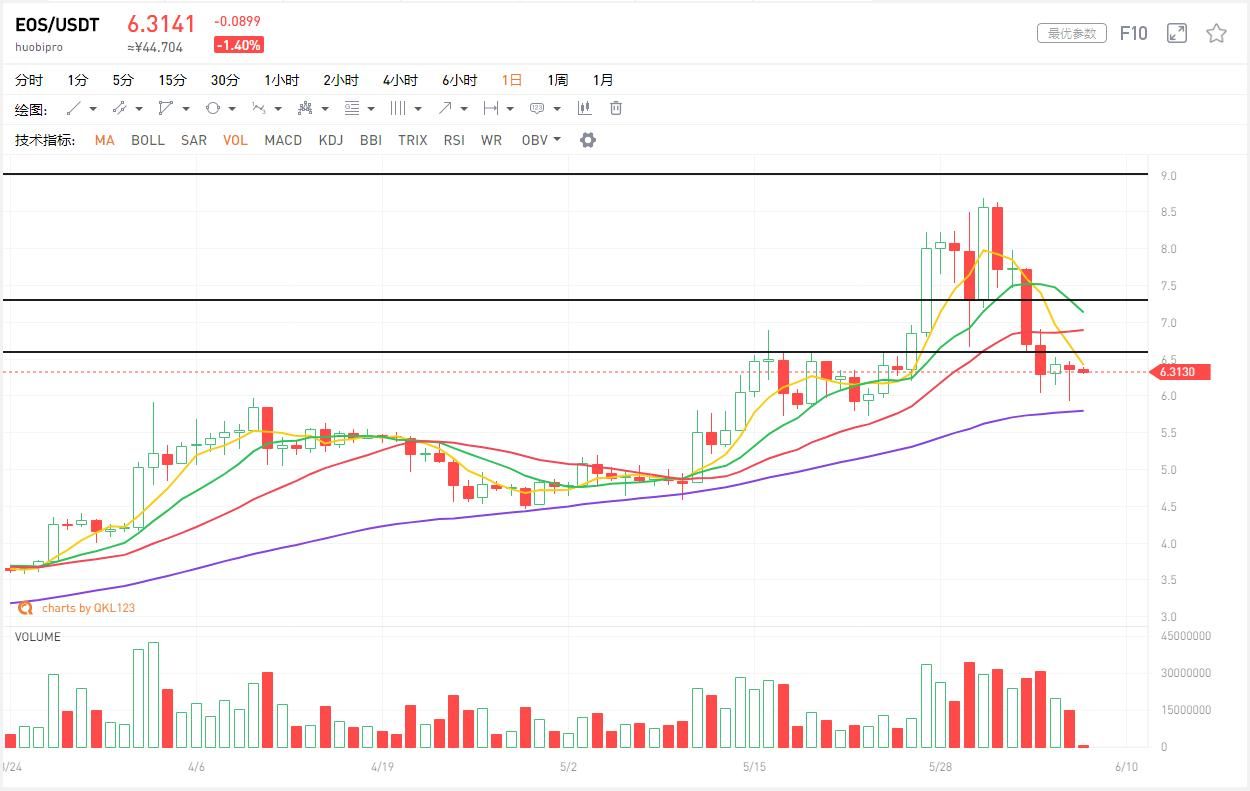 BNB maintains the trend of BNB's medium-term adjustment unchanged. The target will continue to run along the downtrend channel. It does not rule out the possibility of touching USD 32.5 again, but we believe that this point will not be broken. To reach this point, it should reduce the position. Coping, if it falls below $30, it will test the support of $25.5.

FCoin releases FT public chain, 80% of the accounting fee will be allocated to Token and contract issuer

The founder of Sesame Credit Dai celebrates: Blockchain can solve the problem of credit reporting more than the Internet

Why does China have to seize the opportunity to issue central bank digital currency?