Qin Chuan said the coin [No. 56]
Foreword: Today, the entire currency circle repeatedly bottomed out, bottoming, still around the 30-day moving average back and forth game, is currently falling to the bottom. Regarding why it is bottoming rather than pulling up shipments, this is the first time that the funds have not left the market, and the large amount of Bitcoin entered the market and exchanged for USDT to re-enter the market, including the two-hour net entry for the extra-currency funds. increase. It is a sign that the current signs will not appear to increase shipments! Today's news: 1. According to techcrunch, sources said that Facebook is currently planning to release its white paper on cryptocurrency on June 18, explaining the basics of its cryptocurrency. 2. According to the Chongqing Morning Post, recently, the Chongqing Municipal Market Supervision Bureau took the lead, the Chongqing Municipal Public Security Bureau, the Chongqing Municipal Taxation Bureau, the Municipal Government E-Government Office and related commercial banks, Chongqing City built with blockchain and face recognition technology. The company started an online service platform and officially went online. Tang Yingyu, director of the Chongqing Municipal Market Supervision Bureau, said that once the business license is approved, the data will be pushed to the blockchain in real time, and the public security, taxation, and banking will delink the data in real time, and initiate the processing of their respective matters. In other words, the information submitted by the entrepreneur at one time can be used by other departments and no longer needs to be submitted repeatedly. Up to now, 8484 copies of business licenses have been applied through the platform. 3. In the past two hours, the net inflow of BTC has increased again, ranking first!
BTC 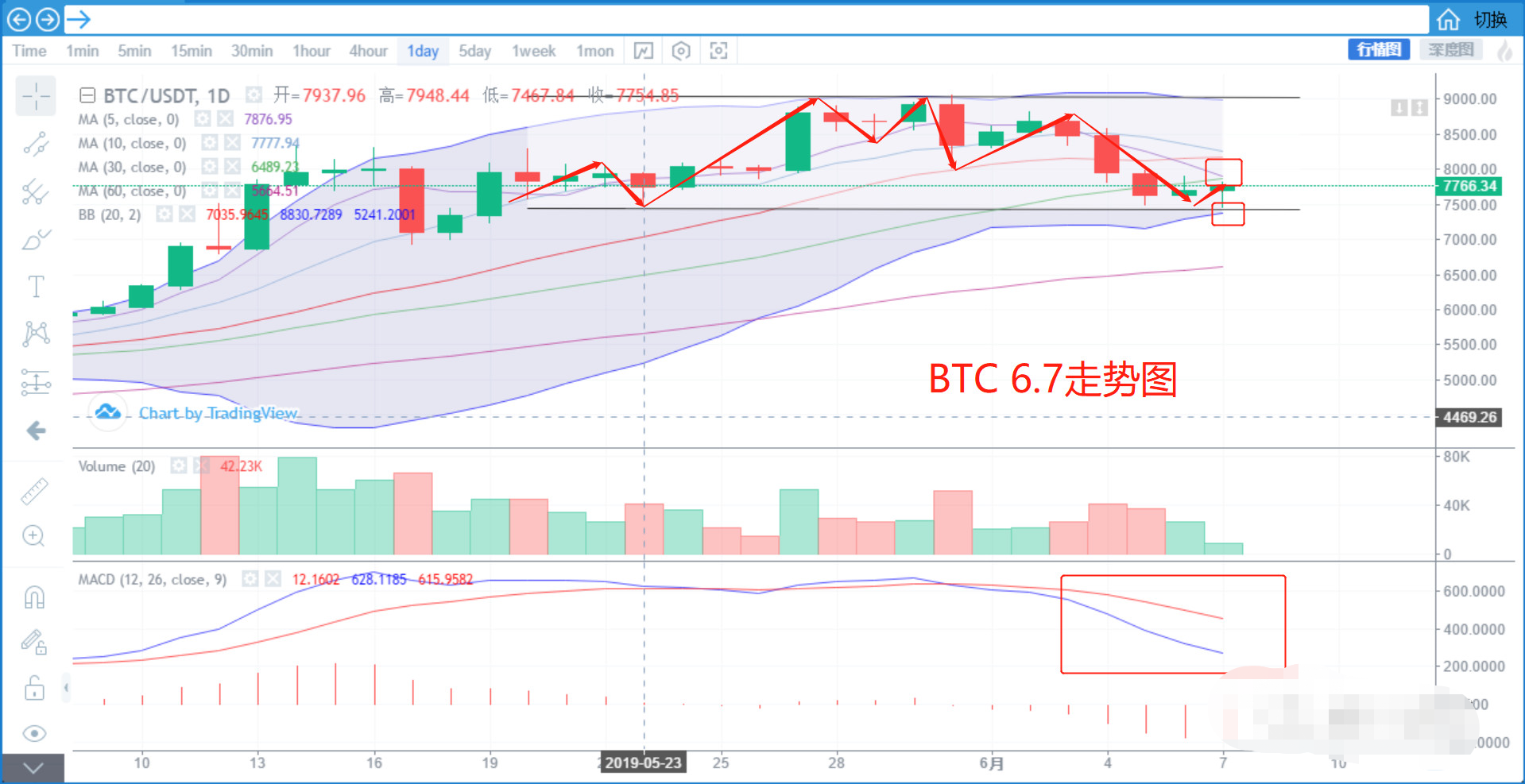 Bitcoin once again fell below 7868, the 30-day moving average strong support, once fell back to the lowest point of 7450 and then quickly rebounded back to 7760. Once again, I took a form of bottoming out. The message is too big to be worth, and there is no news that can affect the venue. In the technical side, it is clear in the daily chart that the price fluctuates in the 30-day moving average and the Bollinger Band, and each round stops falling on the lower rail, while the lower rail and the previous round meet the low point. The bulls are continuing to increase and the MACD is showing signs of flattening. On the whole, this round is a resident rather than a high-level shipment, so we continue to keep a low rhythm in the day, and the spot buy does not need to change positions to change hands! Support 7375, pressure 8190.
ETH

Ethereum continued to test the upper 7-day moving average, and then fell back after the pin. Unfortunately, it has not been able to stand firm above, and has come out of the market. This is also expected. The follow-up currency is affected by the bottom of the pie, and the market wait-and-see mood has increased, affecting the willingness to attack. Many times in the news, I mentioned the influence of the classic hard fork of the ether. As a long-term battle object, the stress rise is likely to occur. Today, the district is 233-256, breaking the position! 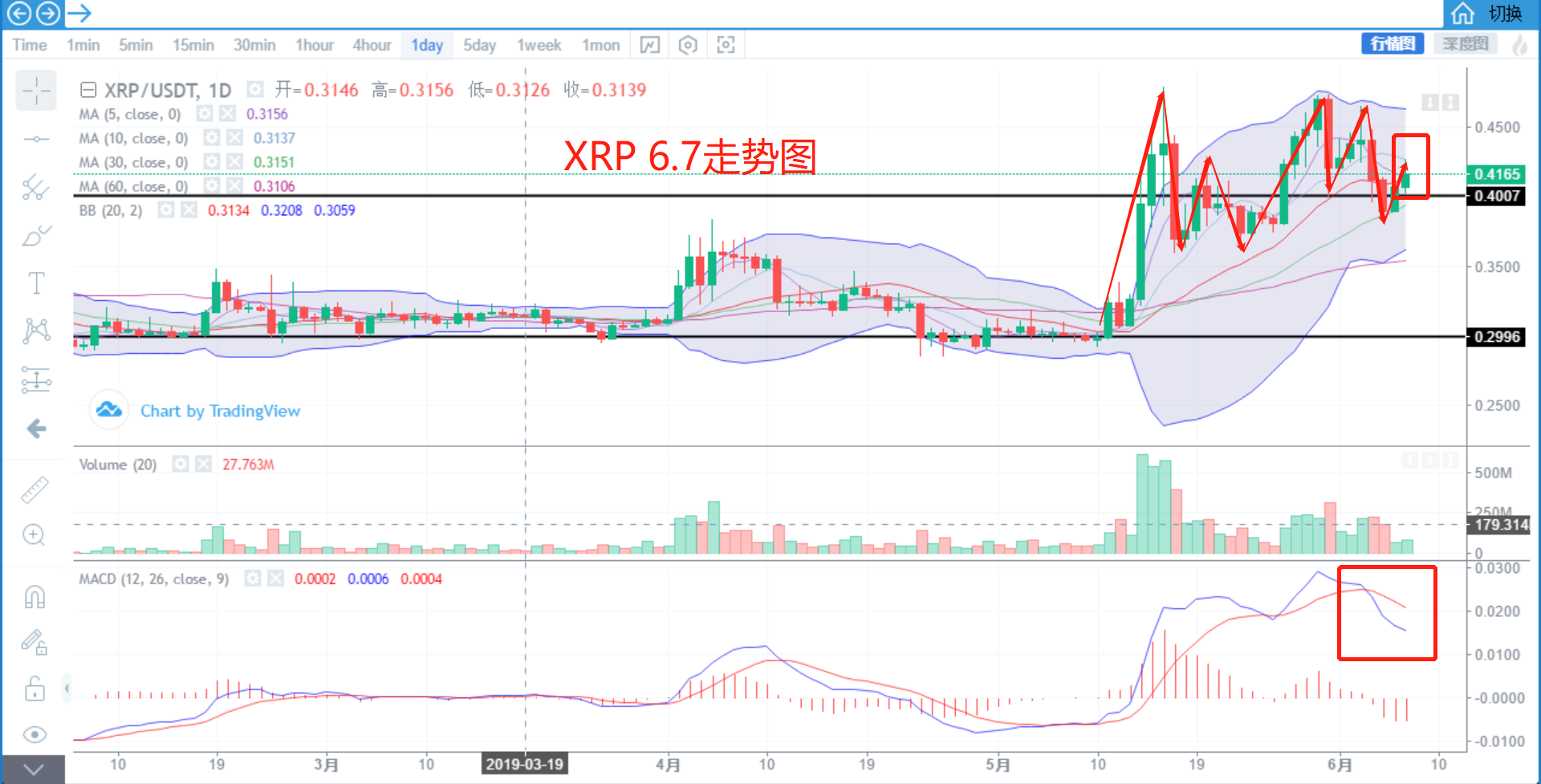 Ruibo as a whole showed a relatively strong trend of the disk. This round of suppression suppressed the top of the large box, but it should be noted that if the market continues to bottom out, it is unlikely that Ruibo will have a large upside. The current disk oscillated around the 5-day and 30-day moving averages, and the moving averages gradually moved closer together, and the range narrowed, showing signs of breaking. The intraday attention interval is 0.39-0.43. The interval is mainly low, and the position is broken!
LTC

In the past few days, the article has included many mentions in the live broadcast that the lightening of the warehouse has been sizzled again. The media promotion of the project side started, and the two rounds led the rise. The market inertia is still there, and it has not dissipated. At this time, the market stabilized and counterattacked. The news is warming up, and it can be said that it is a good time. In addition, the spicy strip is very obvious in the upward trend of the technical daily chart. Did not fall out. This will also add a little stimulus to the market, we can choose to ambush and eat a wave of meat, and as expected yesterday, today's hot bar led by 7 points, and then the mainstream currency. Then yesterday, the spot entered the market and continued to hold, waiting for the high before the attack. Contract light warehouse more than a single can enter the market!
BCH 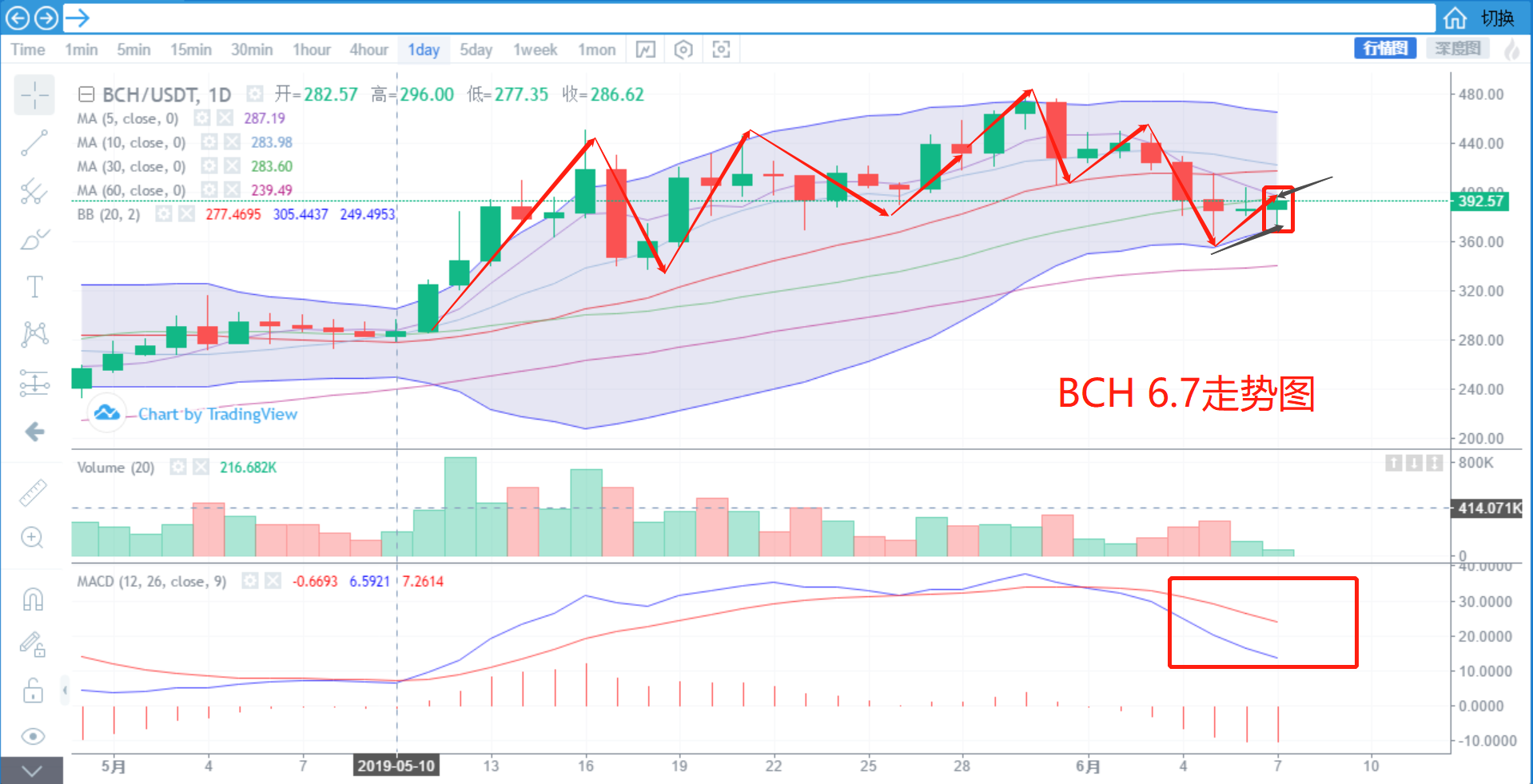 The Prince rose to the original point yesterday and completely re-enacted the trend of Bitcoin. It oscillated in the 30-day moving average and the Bollinger Band, and each round fell to the lower track. At the moment, there is an urgent need for a big cake or a BSV to take the lead. Prince will be able to counterattack in an emergency. Similarly, if the BSV does not fall sharply, the Prince will not have a large downtrend, so there is a position in the spot to continue, and the amount can be pursued in a timely manner. Mainly. The intraday pressure is 428 and the large support is 340.
EOS

Miserable or the most miserable grapefruit, the most vulnerable of all current mainstream currencies, the ups and downs of the 30-day line failed, and then the 30-day and 60-day moving averages back and forth in the game, MACD did not show any signs of turning, the K line form on 5 consecutive Yin. In general, the current grapefruit still needs to continuously weaken the digestive assembly, so that these discs can be changed to other currencies, and it is easier to exert force in the attack. Therefore, friends who hold the spot do not need to change positions. Wait patiently! Summary of the market: In today's market, the market is counterattacking. Now the whole disk is in the early morning, and it is a process of supporting the bottoming. This process tends to last for a few days, which will cause a big blow to the market's unsteady disk, and clean up most of the chips. At this time, you throw away the chips, which is a pity. So I hope everyone can keep their chips in hand and wait for the rise!

Economic Reference: Financial institutions add code to the blockchain and other technologies, and the regulatory tips adhere to the safety principle.