Market Analysis: Can LTC pick up the banner of the rebound?

On the US East Friday, the weak US non-farm payrolls data in May caused the market to cut interest rates to heat up. European and American stock markets closed up across the board, and the three major US stock indexes rose more than 1%. This week, the Dow recorded a five-day increase, with a cumulative increase of more than 1,100 points. Both the S&P 500 and the Nasdaq recorded four consecutive gains. US stocks and technology stocks collectively rose, Microsoft rose nearly 3%, a record high, and the market value exceeded 1 trillion US dollars. In addition, US President Trump said on the 7th that the United States has reached an agreement with Mexico that the plan to impose tariffs on Mexican exports to the United States has been suspended indefinitely.

Under the leadership of LTC today, the bulls have a strong counterattack. At present, LTC is close to the previous high, and we see that other mainstream currencies are still some distance away from the new high. Can the bulls take the opportunity to restart the uptrend again? On the macro level, although I have watched the climax of the trade war, the actual situation has already been undercurrent. I believe that the peak will be turned right soon. Once the trade war has eased, it is a disadvantage for cryptocurrency.

BTC followed the rise and is currently oscillating around $8,000. Personally, the target is doing a right shoulder part of the head and shoulders. The construction of this right shoulder is in the range of $7,500-8,300. After the time, you will choose a direction. If the volume exceeds $8,300, it will restart a wave of upswing. If it falls below $7,500, it will continue to test the platform support of $6,800-7,000. Individuals tend to the latter. 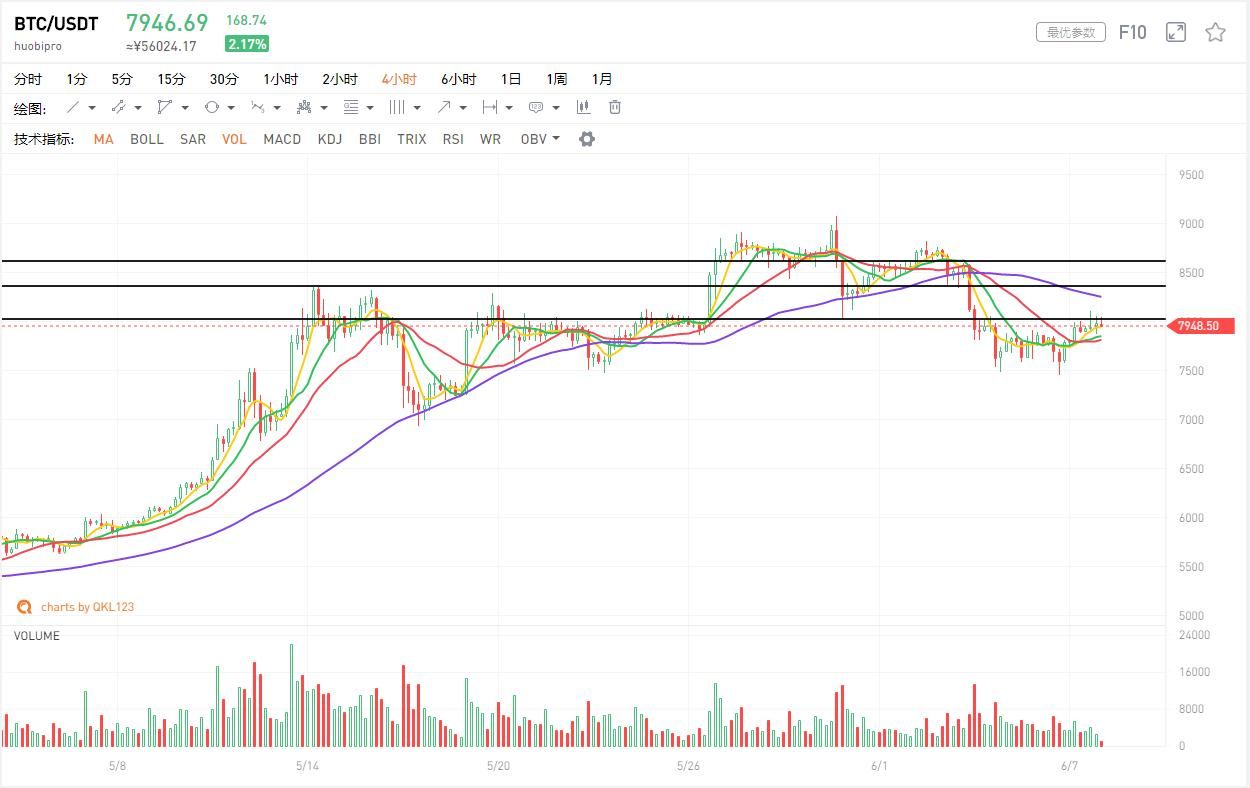 ETH ETH continues the trend of sideways volatility. It is currently oscillating around 245 US dollars. It has not yet chosen the direction. It needs patience. The 5 antennas have been leveled, and the macd indicator continues to run downwards. The ideal state is like the target's upward test of 260 dollars. The pressure level, the individual tends to be unable to stand back at this point, and finally has to test the support of 225 dollars. 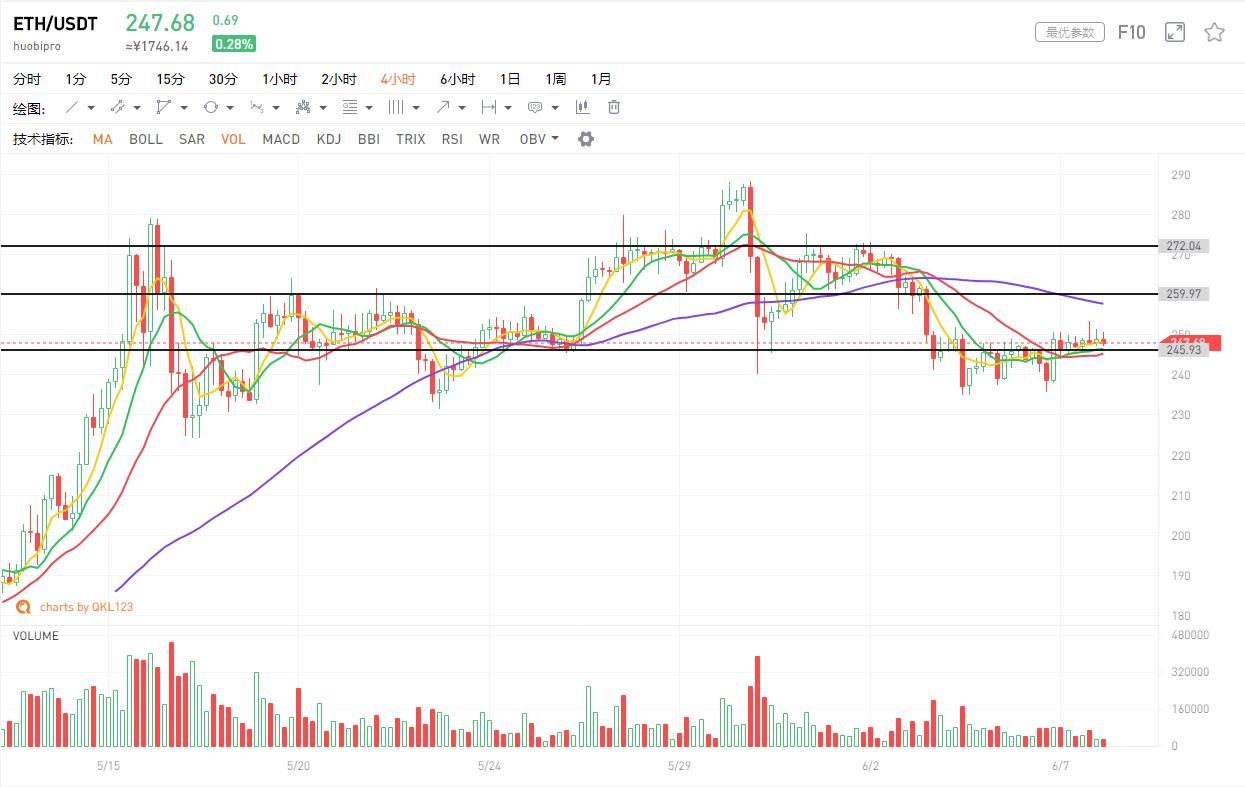 The rebound of XRP XRP was suppressed by 10 antennas, and the judgment of triangle finishing was maintained. The volume of transactions continued to shrink. The crisis of M head was not lifted. Only the strong breakthrough of 0.48 US dollars could resolve the crisis of M head. The overall market weakened and the strength exceeded 0.48 US dollars. The possibility is small, pay attention to risk. 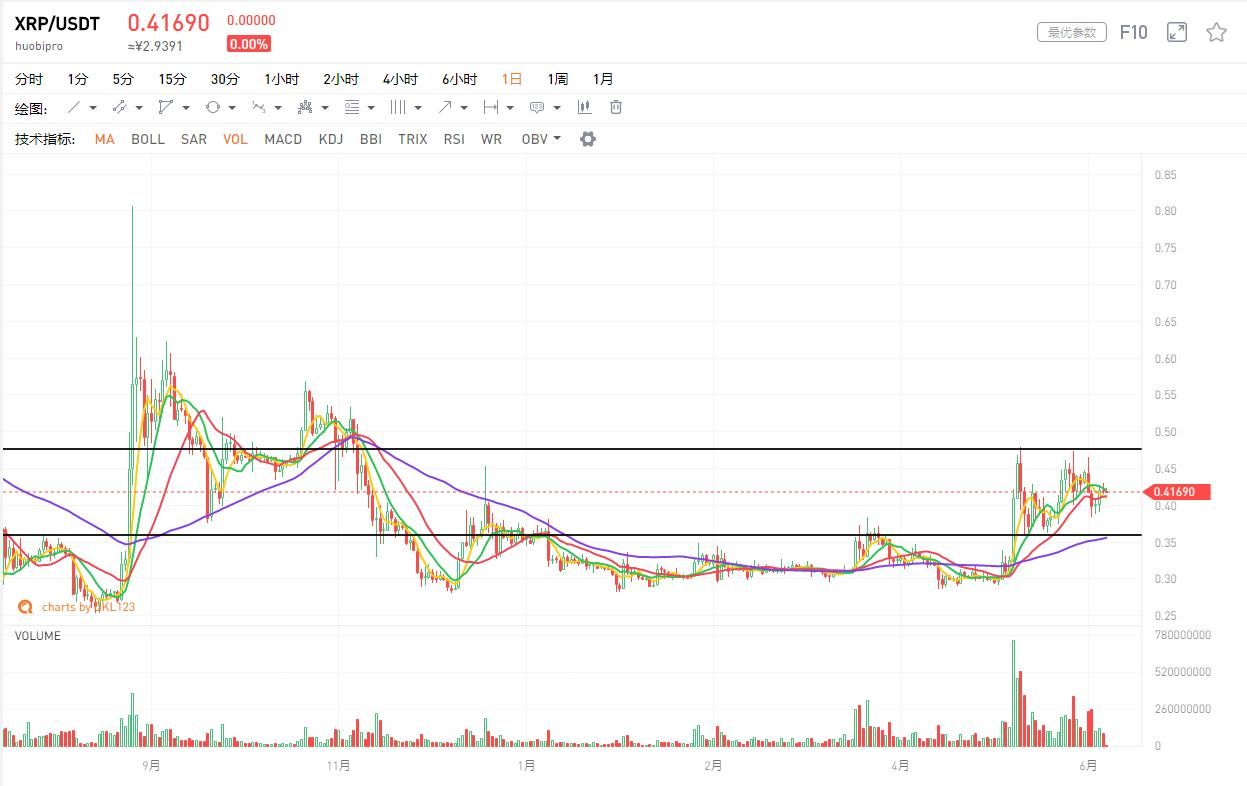 LTC Let's take a look at the trend of LTC. At present, LTC is faced with a platform that has been tested after three short pressures. There are many sets of tight disks here. The pressure in the range of 110-120 USD is strong and it is not suitable for chasing. Whether the antenna can turn heads up, the macd indicator has not yet formed a golden cross with the rise in the price of the currency, indicating that the market may be repeated. 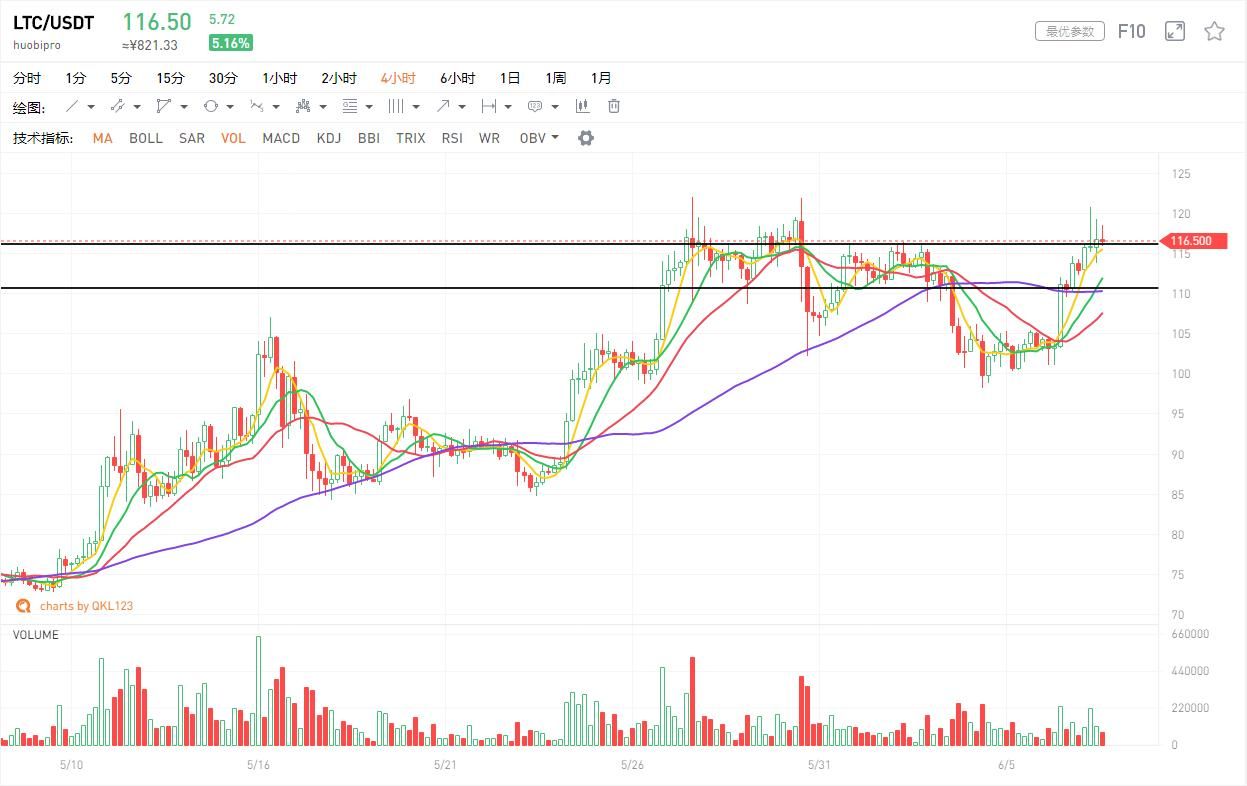 BCH BCH continued to maintain sideways volatility, and the volume of transactions shrank. At present, there is no directional choice. The 10 antennas are rapidly declining, forming a certain pressure on the price of the currency. The mid-term downtrend remains unchanged. It is getting smaller and smaller, and it is likely to be a falling relay form, paying attention to risks. 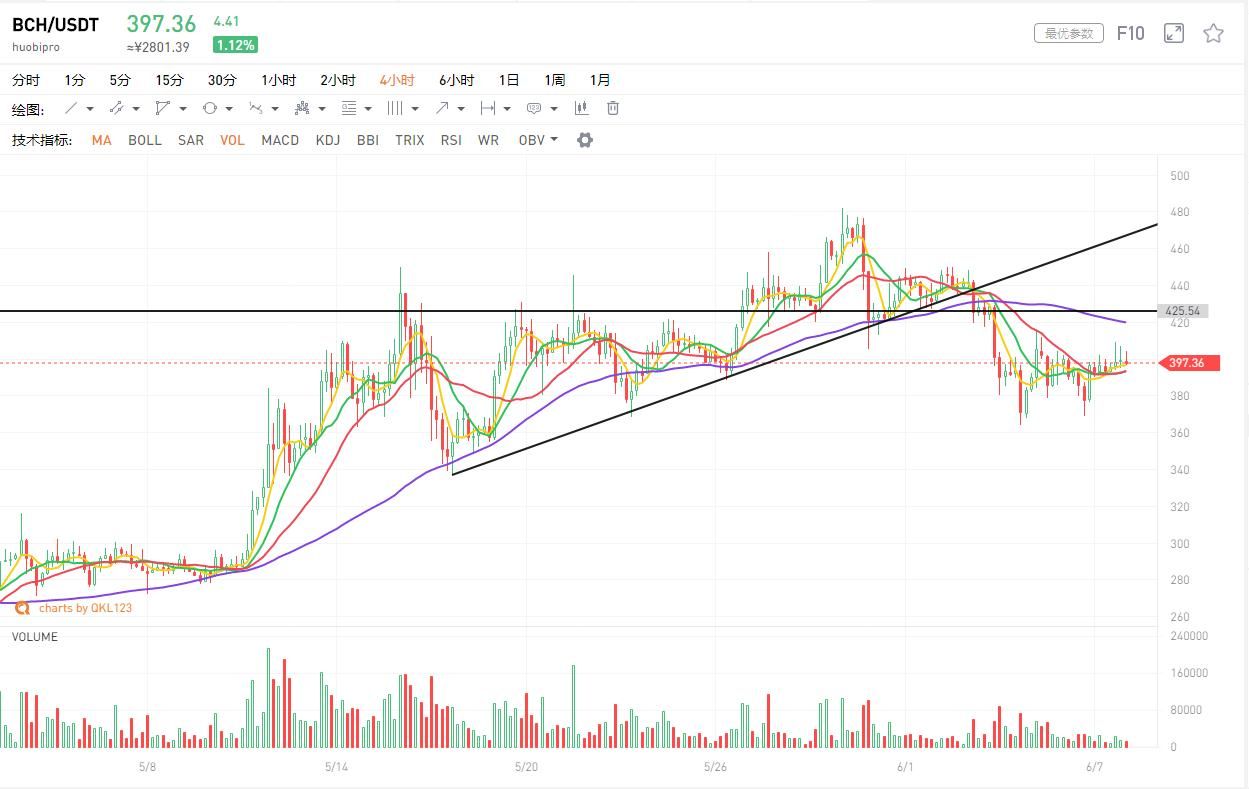 EOS maintains the view of EOS head and shoulders. The short-selling pressure is strong. For the time being, it will not be unsuccessful. Personally, the target will continue to test the support near 5.8 USD. In the short term, it will repeatedly oscillate within the range of 5.8-6.5 USD. The right shoulder portion of the head and shoulders. 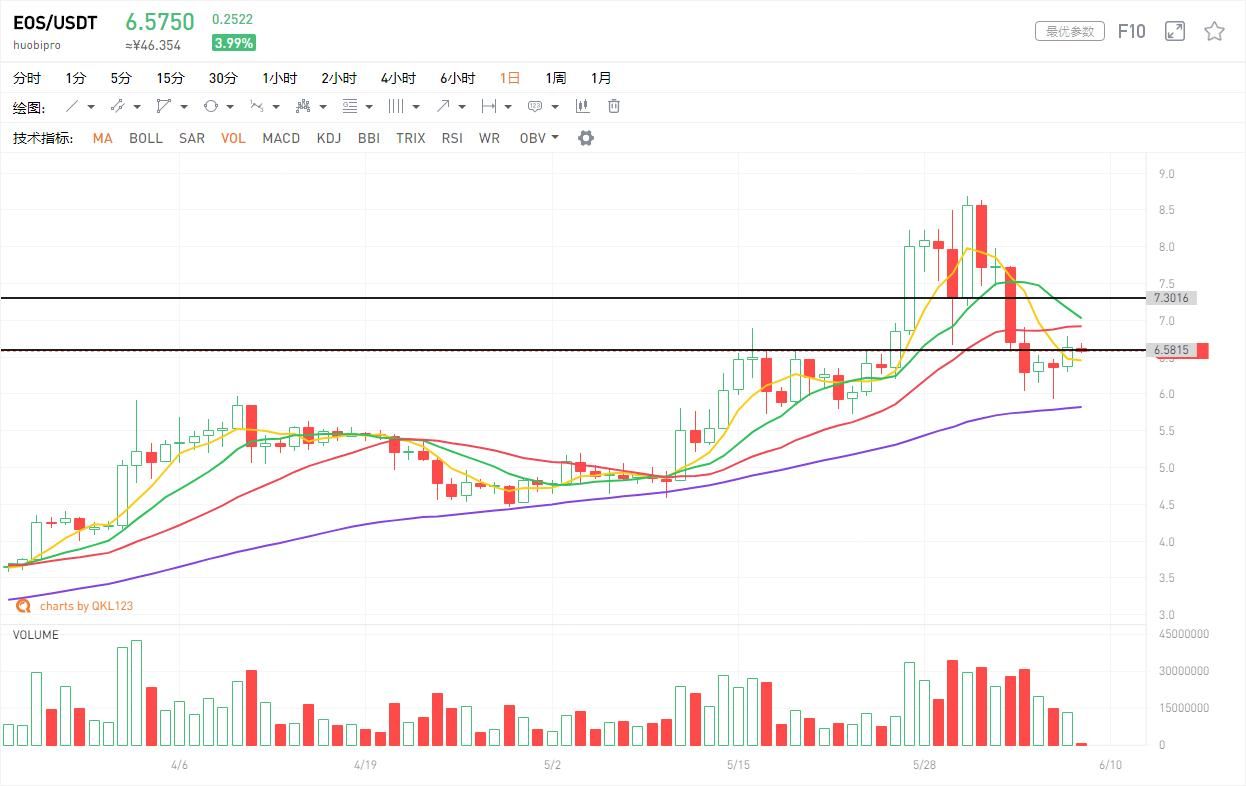 BNB maintains the trend of BNB's medium-term adjustment unchanged. The target will continue to run along the downtrend channel. It does not rule out the possibility of touching USD 32.5 again, but we believe that this point will not be broken. To reach this point, it should reduce the position. Coping, if it falls below $30, it will test the support of $25.5. 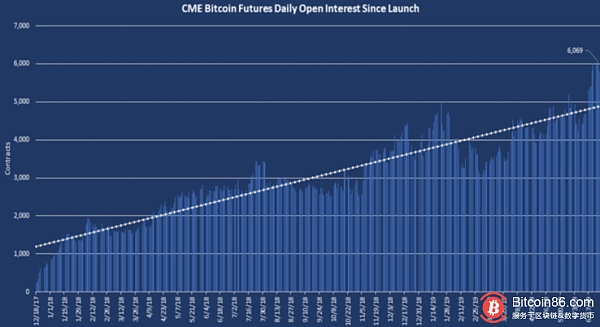