In the recent month, the price of the currency has soared, and Bitcoin once rushed to the vicinity of 9,000 US dollars. It seems that many people have seen the hope of the upcoming bull market. In the bear conversion room, who is screaming and whether it is revealing new market trends.

PAData analyzed the cryptocurrency discovery of CoinMarketCap on the top 30 circulation market value as of June 4. Since the end of March, the market value of TOP 30's encrypted goods has continued to rise moderately, rising from $130.4 billion at the end of March to 2432 at the beginning of June. Billions of dollars, an increase of about 86.5%. In the past 30 days, the TOP 30 currency has increased by an average of nearly 33%. The BSV once again "made a demon", the price of the currency and the market value soared by 300% in the past month.

The cryptocurrency market is still a market highlighted by the “Matthew effect”. Regular observation of changes in the cryptocurrency of the market value of TOP 30 helps to observe market trends. Prior to this, PAData analyzed the TOP 30 cryptocurrency on August 28, 2018 and March 25, 2019, respectively. It was found that BNB was strong in the exchange "new" campaign, and MKR was not in the Defi concept. It has been a sudden emergence in the bear market.

Compared with the previous two statistics, the overall pattern of cryptocurrency with a market value of TOP 30 still has little change. 90% of the cryptocurrency fluctuates within the TOP 30 range, BTC, ETH and XRP are among the top three market capitalizations, and the market capitalization rankings of BNB, BAT, GOGE, XMR, NEM and USDT are also the same as last time.

In the Maker under the Defi Aura, the market value ranking dropped by 6 places, which is the highest drop in the market value of TOP 30. At present, TRON, who was in the whirlpool of public opinion because the founder Sun Yuchen took the Buffett charity luncheon at a historically high price, its market value ranking dropped by one place from the previous statistical day, and remained basically stable. The market capitalization rankings of well-known domestic public chain projects NEO, ONT and VET also declined. The replacement rate of this statistic is 10%, that is, there are 3 project tokens with new market capitalization TOP 30, which are BTG (bit gold), LINK (Chainlink) and ATOM (Cosmos), and WAVE replaced by TOP 30. , OMG, QTUM. Among them, ATOM has a market value of 15, BTG has a market value of 25, and LINK has a market value of 30. It is worth noting that Cosmos's token ATOM, which is mainly a cross-chain technology, only landed on major exchanges in early April. After one month of listing, the market value entered the TOP 30 visible market.

In addition, looking at the project tokens in the past TOP 30, we can see that the public chain project is absolutely dominant. The infrastructure project is mainly in line with the current stage of development of the industry, and the new TOP 30 Chainlink and Cosmos are middleware projects, which also indicates the deepening development of infrastructure and the further expansion of technology space.

The market value increased by about 33% in 30 days. Overall, under the general trend of the market, the TOP 30 cryptocurrency averaged nearly 33% (including 95% CI) in the past 30 days. 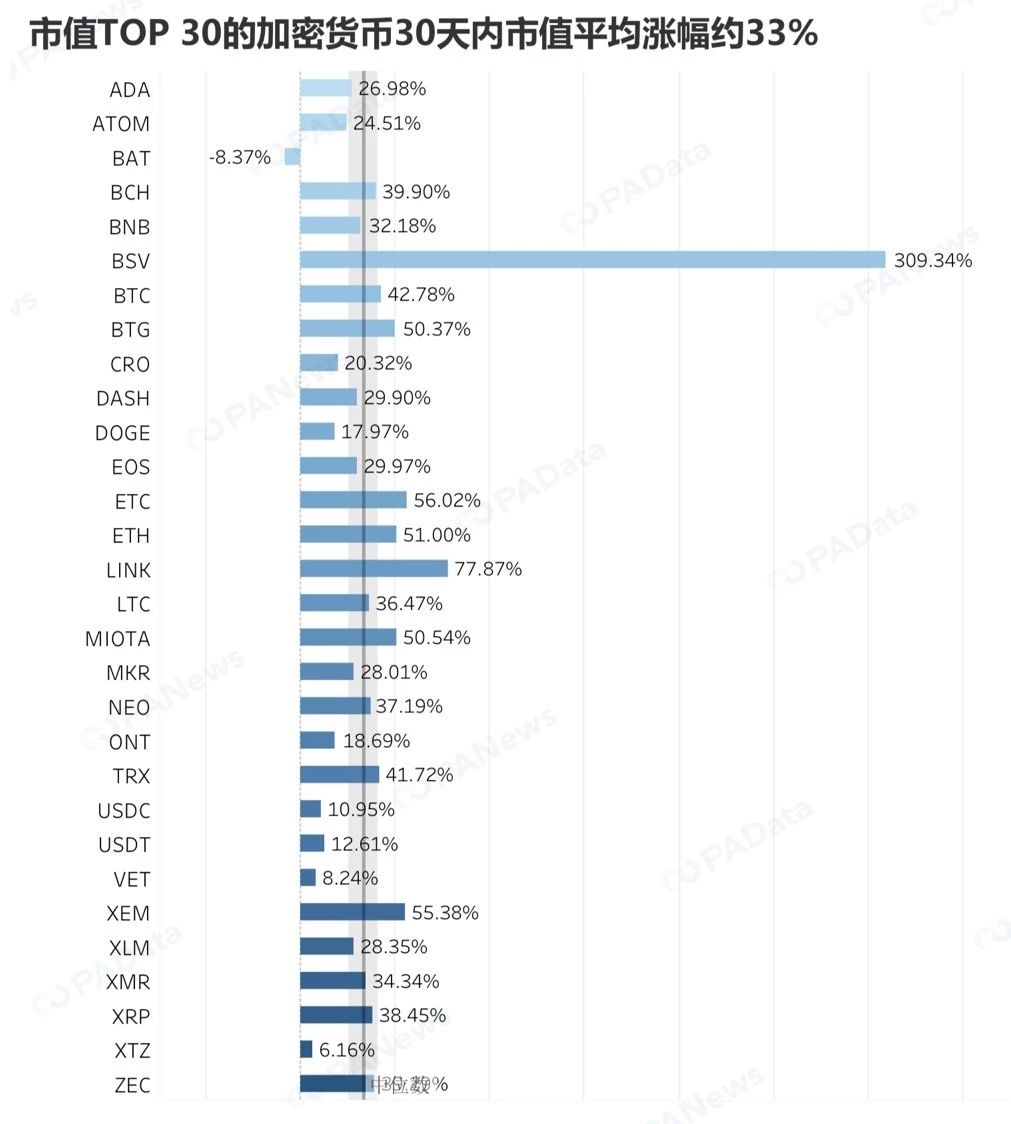 BSV surges by more than 300%, BTC has the least volatility

From the perspective of currency performance, BSV is the most up-and-coming currency in this round of Mavericks. In the past 30 days, the price of the currency has soared by 308%, from the closing price of $5.16 on May 3 to the closing price of $221 on June 3. This is equivalent to "eat" to the daily limit in the A-shares for one month in a row.

If it is not a stable currency, only the price of BAT and CRO in the cryptocurrency of the market value of TOP 30 has fallen in the past 30 days, of which BAT has dropped by 8.94%. 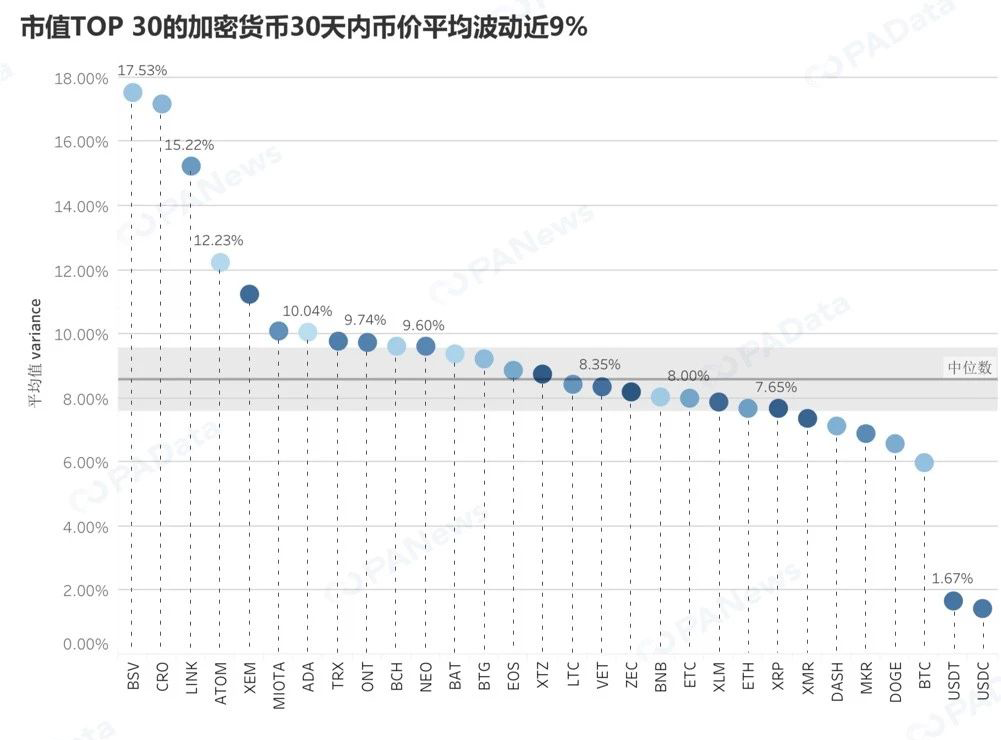 The highest volatility in the past 30 days is still BSV, with an average daily fluctuation of 17.53%. The driving force behind the BSV rise was mainly due to the impact of CW's claim to obtain the original Bitcoin white paper and most of the original Bitcoin code (version 0.1) US copyright registration news on May 21, but this sudden news can provide continuous increase. The kinetic energy is debatable. In addition, CRO, LINK, ATOM, XEM, MIOTA, and ADA have more than 10% fluctuations in the past 30 days, which is a highly volatile cryptocurrency.

However, a senior cryptocurrency investor told PANews: "This wave is mainly the result of the large-scale domestic and foreign Lianzhuang pull." So in terms of time series, the number of active addresses and the number of transactions are not the same as the price of the currency. Time has gradually increased. This is different from the increase in the number of active addresses in the bull market from the end of 2017 to the beginning of 2018. This Mavericks market does not represent the expansion of the actual market size/user group. 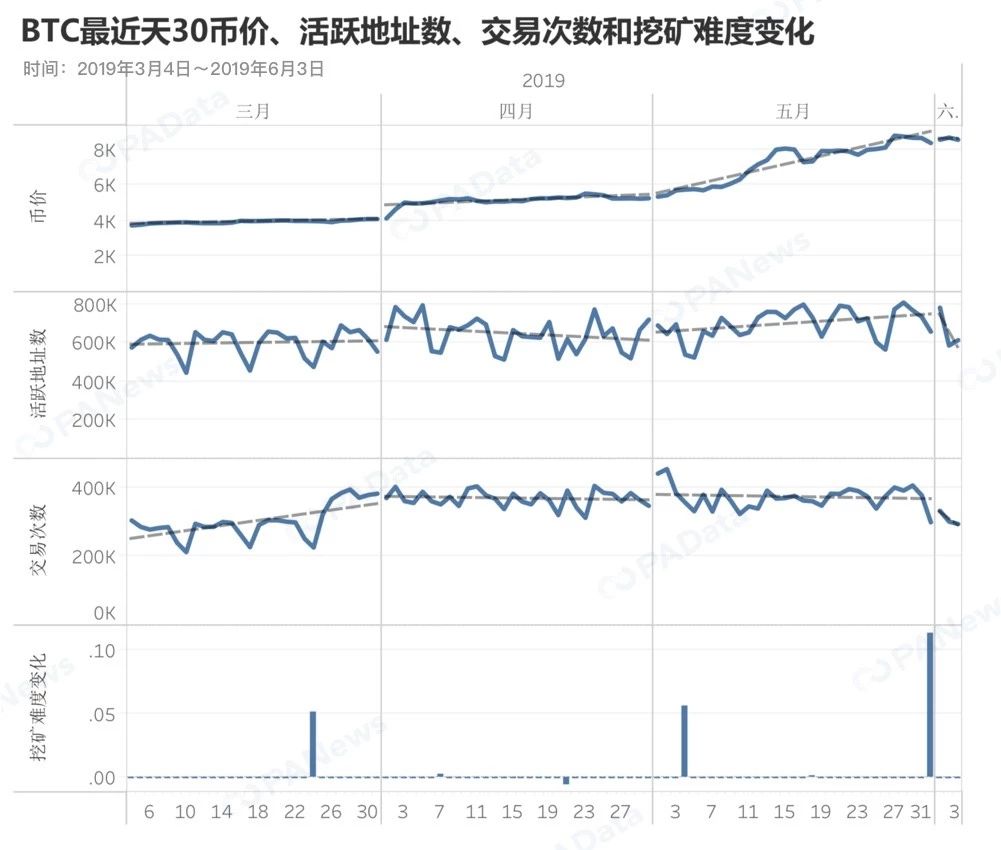 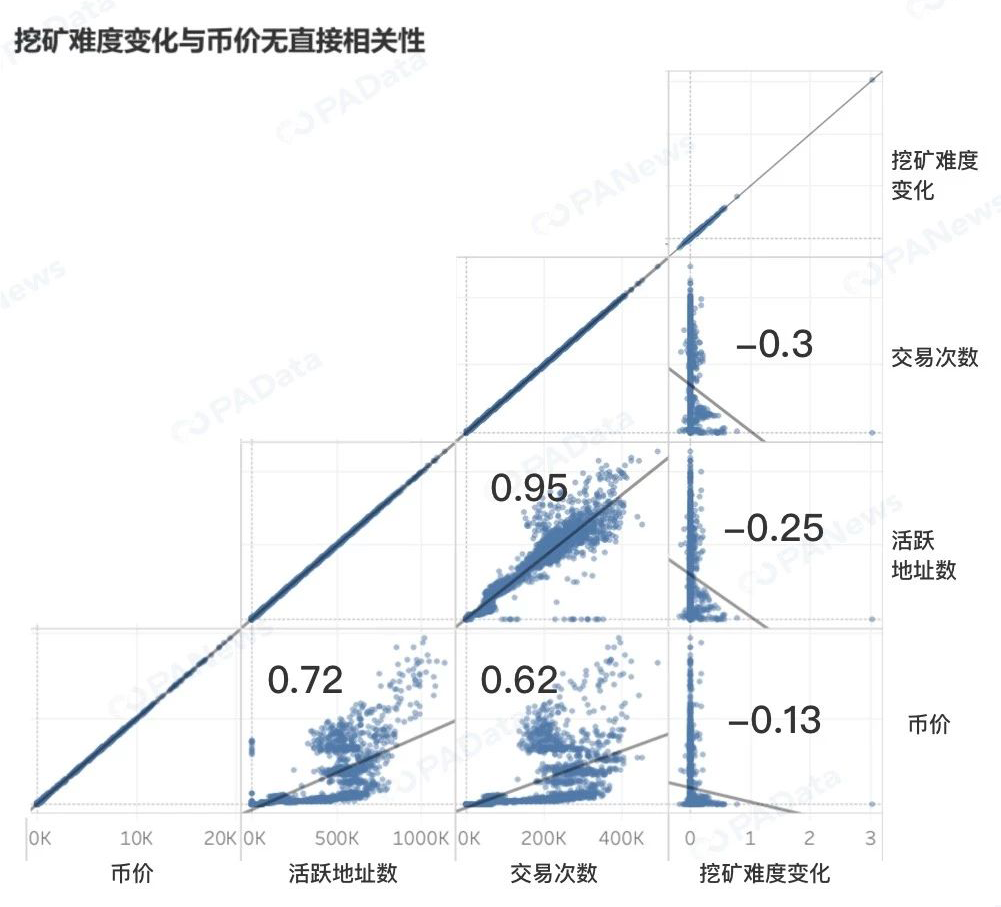 However, the increase in the difficulty of mining does not mean that the price of the currency is rising or is about to rise. According to the correlation analysis, there is no direct correlation between the extent of the difficulty of mining and the price of the currency, the number of active addresses and the number of transactions.

Blockstack CEO talks about TON being sued: this is why we chose to follow compliance