In recent days, after the bitcoin price retracement, the market has continued to be depressed and boring. However, the domestic currency has become a standout, rising against the trend and becoming a “green in the Wanhong Cong”.

Today (around 15:00), the digital currency market fell more and more, and 65 of the TOP 100 currencies fell 35. Domestic coins have become the main force of the rise, with Gongxinbao (GXC, up 37%) and Nebula Chain (NAS, up 46%) rising most fiercely. The two also led to the rise of a series of old domestic coins. As of 15:00 today, the 24-hour increase is as follows.

It is worth noting that all domestic coins have been positive in the past month, with Gongxinbao (145%), Yuanjie (127%) and Xingyun Chain (97%) ranking in the top three, with the lowest monthly increase of 11%. . The data site Tradingview uses Bitcoin as a benchmark 15 minute chart. The public letter and the nebula chain have even increased by more than 60%. In addition, a series of domestic coins have been “floating”.

Tradingview's daily chart with Bitcoin as the comparison standard shows that the domestic currency has risen even more violently. The public letter has risen by more than 100%, the nebula chain has increased by 64%, and the growth of the Yuanjie, GAS, the original chain and the quantum chain have exceeded 30. %.

The old tree sprouts the push hand: buy back?

Huang Minqiang, the founder of Gongxinbao, said on Weibo on June 4th: We must continue to do things, and let the first one be released tomorrow. Thus, on June 5, Gongxinbao opened its first repurchase and repurchased more than 170,000 GXCs.

On June 10 (today), Gongxinbao announced the completion of the second repurchase of the “$5 million repurchase program”. The repurchase amount was US$500,000, which was twice the amount of the first repurchase. That is, $5 million has been repurchased for $750,000. Gongxinbao said that the remaining 85% of the repurchase will be completed within 2 months, and the GXC lock-up time for the repurchase is at least 6 months.

Today, Huang Minqiang and Weibo said that the exchange LongBit released the Space X plan and started to play new this week. The first issue is the exchange platform LBP, and GXC will participate in the new project. The first round of participation in the transaction is GXC/. LBP.

In addition, Xu Yiji, founder of the nebula chain, said yesterday that in order to further expand the influence of the nebula ecosystem, and also lay a good community foundation for the upcoming Smart Asset-asset release new paradigm, the nebula founding team will contribute no less than 10 million. The US dollar launched the NAS increase plan. The NAS repurchased by the increase plan will lock the warehouse and join the NAS open pledge pool. The repo-locked address will be publicized in the community recently and the public repurchase progress will continue.

In addition, during the year, the Nebula Chain Program promoted the election of the council, node distribution and other plans to promote the initial realization of the autonomous dollar network.

Affected by the domestic currency repurchase program, many domestically produced old coins seem to be rising. However, the market has seen many doubts about the phenomenon of repurchase. The currency and finance said that "the repurchase is a scorpion, and the pull is true."

The coin circle big V "blockchain William" also issued a microblogging said: the currency circle will still play, but also yell when pulling the disk, the last news let everyone know. By the way, they are calling "secondary market repurchase."

Various media reported around 15:00 today. According to official sources, the NULS Foundation is planning to repurchase 1 million NULS from the secondary market to stimulate the ecological construction after the 2.0 main online line. 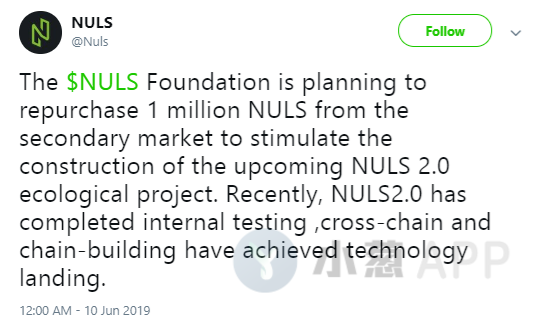 After the repurchase news came out, the fire currency market showed that the NULS market soared, and the increase in the past hour was as high as 20%. 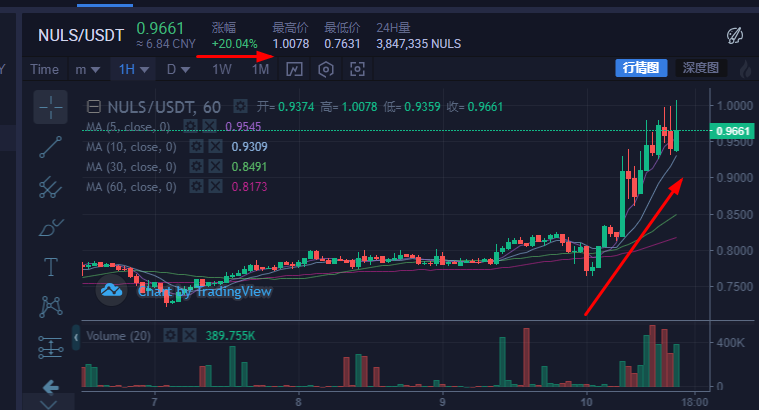 However, not only is there a frequent repurchase of domestic currency, ZB.com, OKEx, etc. have also started the repurchase program in just a few days in late May.

At the end of last month, OKEx repurchased about 450,000 OKBs. On June 6, ZB.com officially announced that it had completed the second quarter of 2019 ZB points repurchase, this time repurchased 36.8 million ZB points, now all locked in the user protection fund address.