The United States and Mexico reached an agreement on tariffs, alleviating some of the trade concerns that have been putting pressure on the market since the beginning of May. On Monday (June 10), the Dow Jones Industrial Average rose for the sixth consecutive trading day, closing at 26,062.68 points, up 78.74 points, or 0.3%. The S&P 500 index rose 0.5% to 2,886.73, a 2% higher than the intraday high of May 1. The Nasdaq Composite Index rose 1.1% to close at 7,823.17. The Dow Jones index ended last week for six consecutive weeks of declines, up 4.7%, the biggest weekly gain since November last year. The S&P 500 and Nasdaq index rose 4.4% and 3.9% respectively last week.

In addition, according to Coinatmradar data, the installed volume of Bitcoin ATM reached its highest point in a year in May, with a net increase of 228 units. Operators installed a total of 306 Bitcoin ATMs this month, increasing the number of Bitcoin ATMs from 4,690 to 4,889.

Affected by the favorable pull of LTC production, the BTC pulled up from around $7,500 yesterday to around $8,000. We also mentioned that there are still a few days before the target can build a symmetrical head and shoulders. If the market is strong, The target will break through the range of 8,000 US dollars to 8300 US dollars. If it is not strong enough, it will turn back around 8000. The current shock range is still within the range of 7500-8300 USD. If it falls below 7500 USD, the head and shoulders form will be established. Pay attention to the risk. . 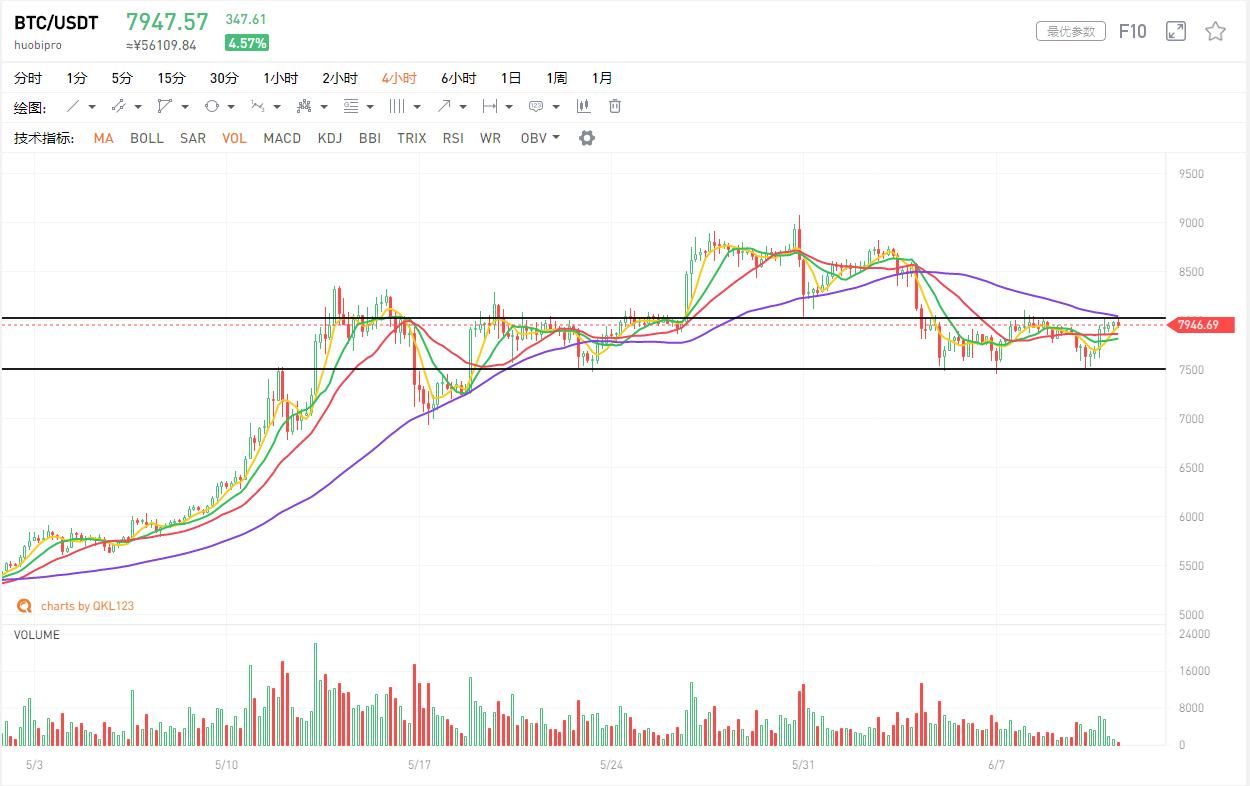 ETH follows the market rebound and is now oscillating around 245 USD. We can see from the time-sharing trend that the rebound volume of the target is getting smaller and smaller. Currently, it is facing the pressure of 10 antennas, and the macd indicator continues to run downward. The trend is unclear, $225 is the neckline of the entire head. A break below that point means that the head is established. A break of $260 will hit a new high, with little possibility and attention to risk. 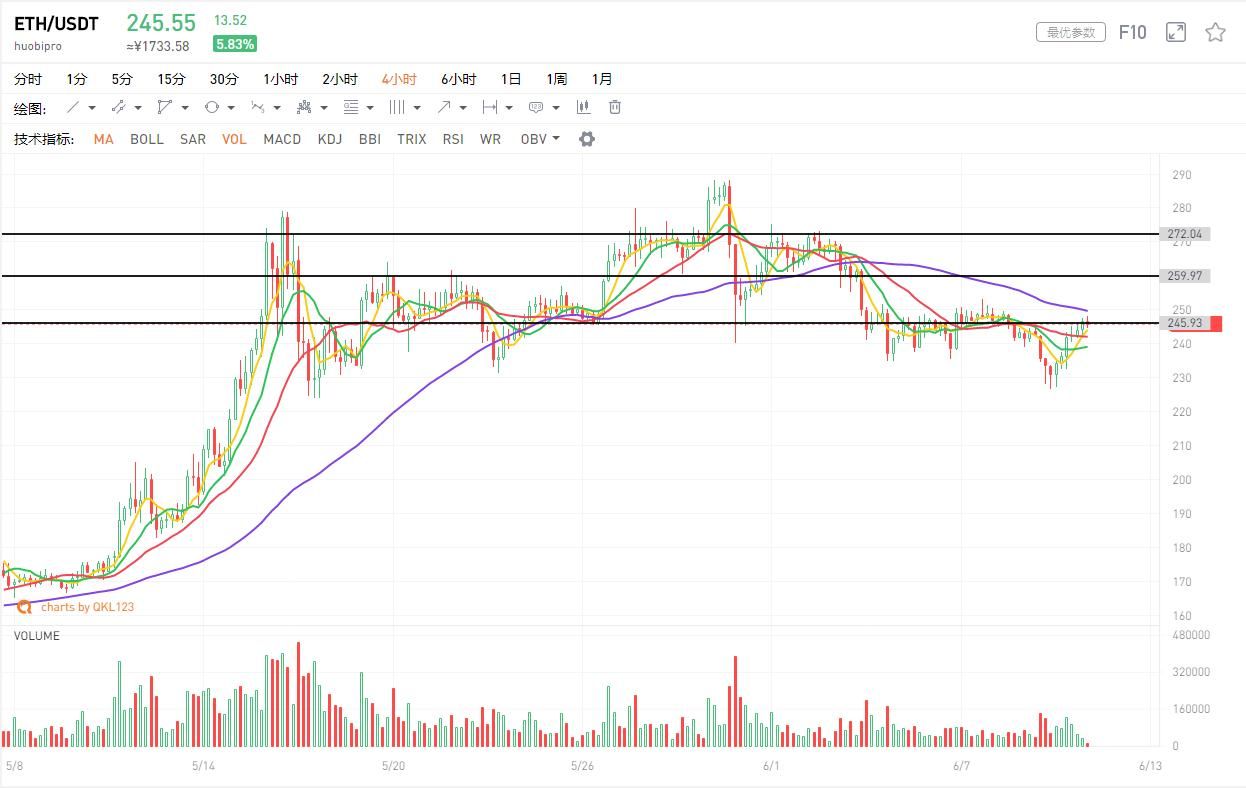 XRP still has announced that it is cool, this round of rebound and even 5 antennas failed to stand up, continue to be a rebound shrinkage, down the volume of the trend, 5 antennas still run down quickly, macd indicators are also continuing downward, soon Close to the zero axis, $0.37 is the neckline of the M head, and the possibility of breaking the neckline is increasing, paying attention to the risk. 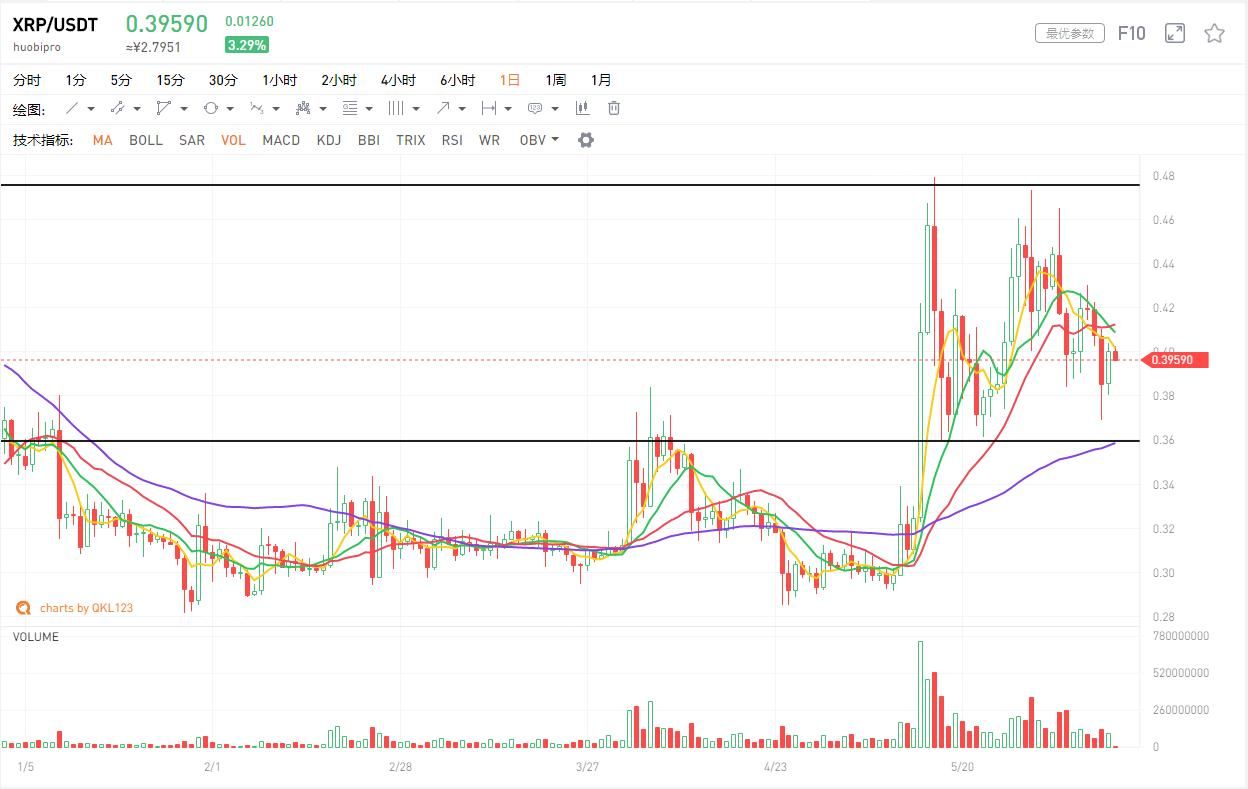 In the early hours of the morning, LTC rose to a maximum of $130, a new high since late May last year. It is currently slightly down, closing at $129. LTC's excellent performance may be related to the halving of the mining incentives to be carried out on August 8. LTC's computing power also hit a record high in the early hours of the morning, breaking through 400 trillion H/s. LTC rose more than 500% in the three months before the last reward halved. History can't be simple analogy. Currently LTC is from the bottom. It has risen by 586%, and its own increase has been too large. The next step is to look at the overall market reaction. If the mainstream currencies hit a new high, the target may continue to challenge the rebound. 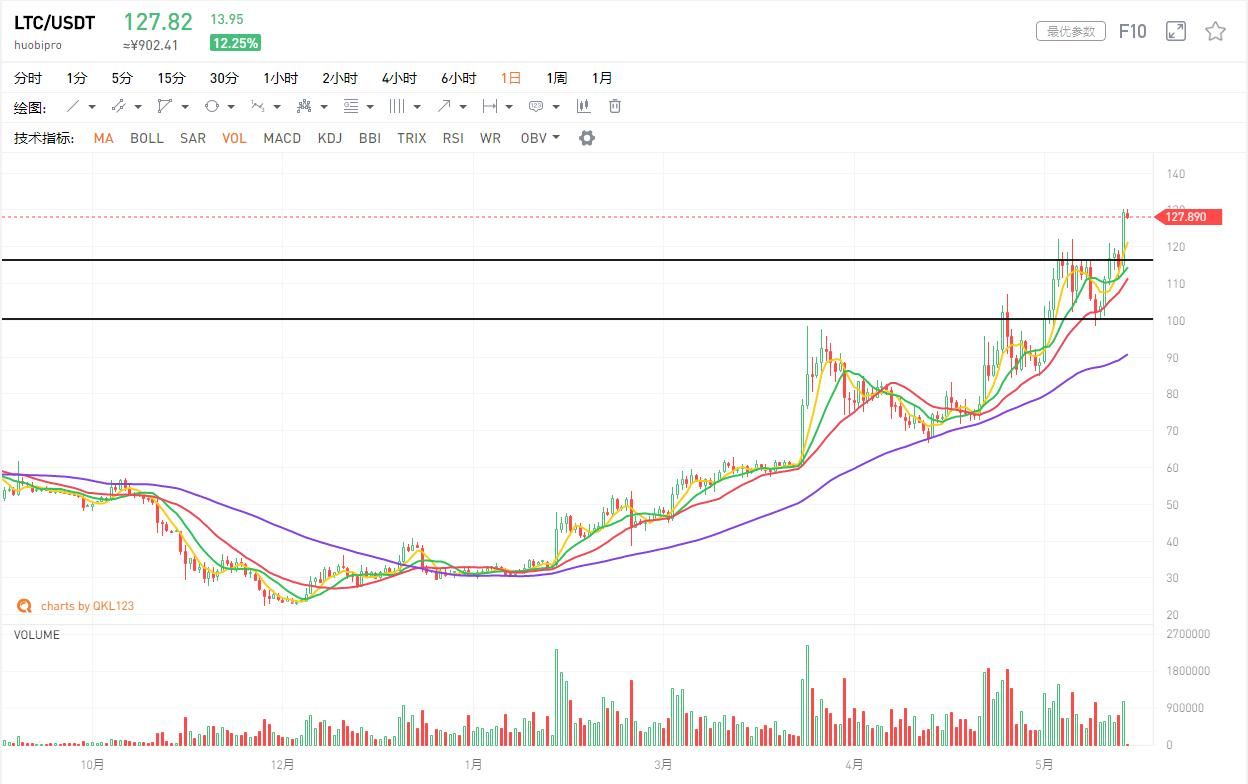 BCH's market capitalization ranking has fallen to the fifth place. This round of rebound, the target has not followed, but continued to move sideways, indicating that the fund wait-and-see mood is more serious, maintaining the judgment of the head and shoulders, the downward trend remains unchanged, short-term If you can effectively support the nearby 370 US dollars, if the point cannot be effectively supported, the target will be moved down to 337 US dollars. The medium-term adjustment is expected to remain unchanged, paying attention to risks.

The trend of EOS is nothing new. In the process of constructing the head and shoulders, the 5 antennas are flat, the 10 antennas are still running fast, and the macd indicator is close to the zero-axis area. Personally, the target will continue to test below 5.8 USD. The support will be repeated in the short-term range of 5.8-6.5 US dollars to build the right shoulder part of the head and shoulders. 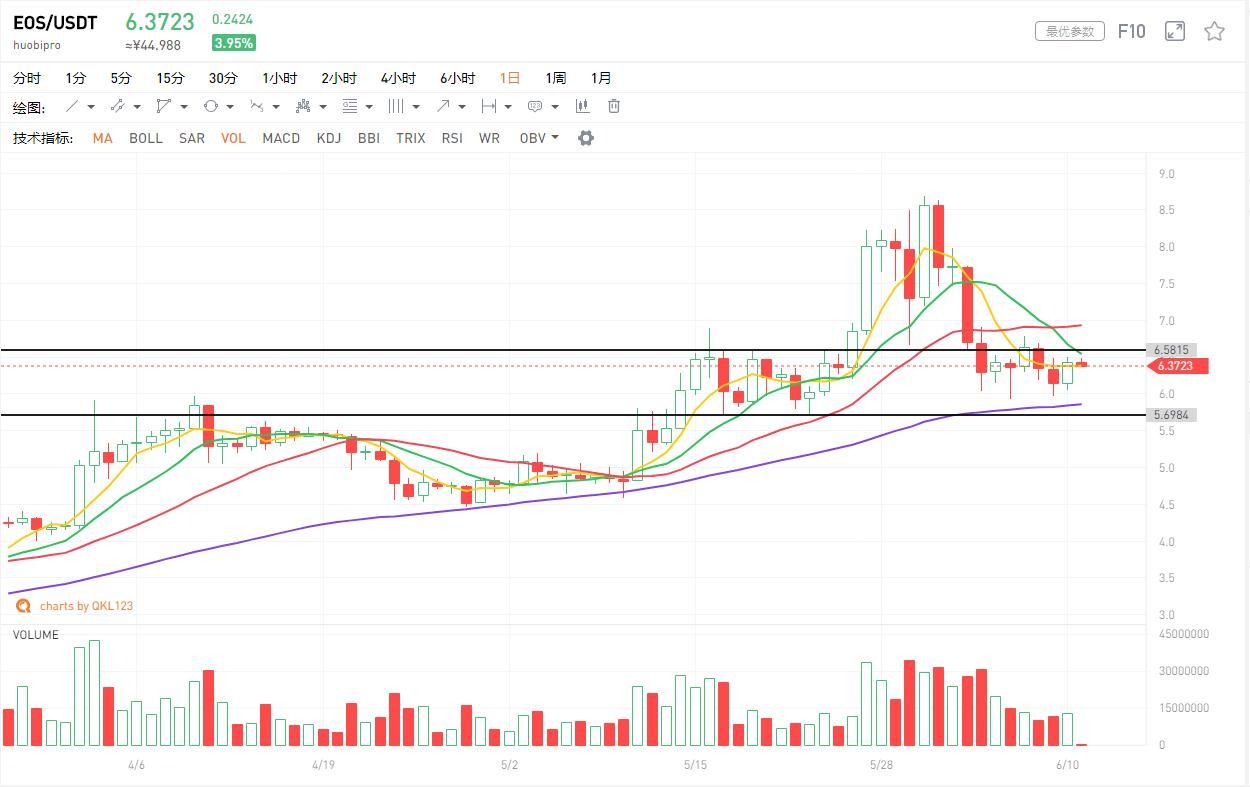 BNB rebounded strongly yesterday, directly countering the yin line of the day before yesterday, but we still saw that the target still failed to get rid of the shackles of the down channel, failed to stand up to the middle pressure of 32.5 US dollars, and re-station At the point, you may try to test the front height of 35.5. Before you hit the point, you will continue to judge along the down channel. After you touch the upper track, you will start to test. Now the target card is facing a 30-yuan integer. The support of the gateway, if it falls below this point, it will lower the support of the lower rail. At present, the BOLL channel of the daily line level has been leveled, and then it is very likely that the head will turn down and pay attention to the risk. 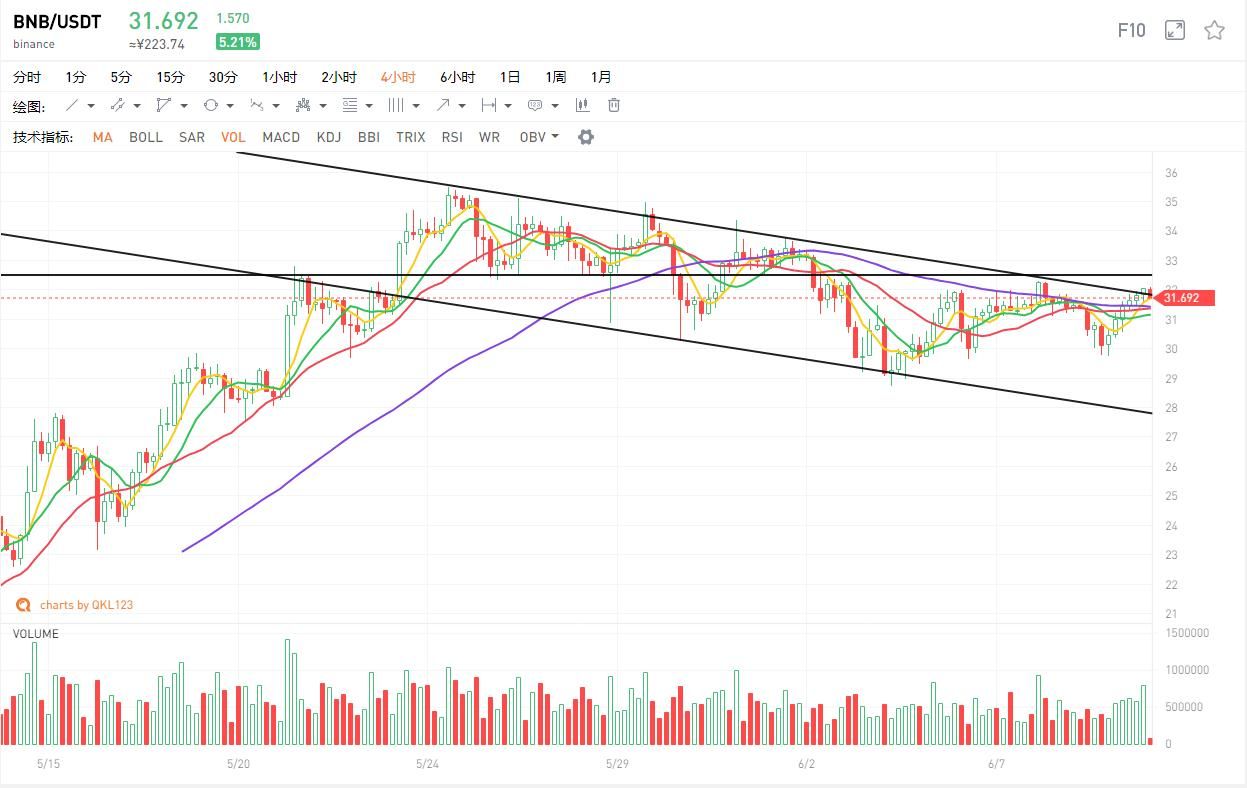 Zhongying Internet: The digital currency trading platform is not in the process of preparation

2020, Bitcoin mining is about to usher in the year of life and death

Harvard Business Review: Blockchain will have a groundbreaking application in project management