The price of the currency has picked up, the undercurrent of the mine has surging, and the second-hand video card transaction has also come back.

Graphics mining is not new. It was once a necessity for Bitcoin mining, and Li Xiaolai once used his own power to buy the high-end graphics cards on Taobao.

In the big bull market in 2017, video card mining has risen again, and even video card manufacturers and distributors have joined.

In the past two years, the mining of graphics cards has been floating with the price of coins. Some miners have made a lot of money, and some people have gone out.

"The price of the currency has risen, and there are more second-hand 'mine cards' in the circle of friends." Zhang, who runs the computer business on Taobao, found that his own hardships may have come again.

He remembers that in 2017, graphics cards were often out of stock and prices soared. He had to explain to the dissatisfied customers: "The graphics cards have been bought by miners to mine."

Ethereum relies heavily on graphics cards for mining, which makes the graphics card once again become the new favorite of miners after being eliminated by bitcoin mining in 2014.

And Ethereum also relies on graphics card mining, as well as Monroe, Dash, ZEC and other currencies. In the bull market of 2017, they also emerged, which increased the tension of the graphics card supply.

In the face of profit-seeking miners, the main consumer groups of high-end graphics cards in the past – game players, completely defeated. The graphics card circle is full of all kinds of strange legends.

"The most famous one is that a large miner drove a truck to the door of the graphics card factory and took the cash in the box to get the goods." Zhang said, "The price of the big miner is half that higher than the channel supplier. 'You have to be a model.'"

However, most of the high-end graphics card sources on the market are still in the hands of graphics card manufacturers and channel vendors. They "go personally" to mine, has long been an open secret in the industry.

At first, Hou Beichuan only wanted to be a regular business. But as the price of the currency rises, more and more customers are found, and the quotation is getting higher and higher. He "cannot help the temptation" and received many orders.

“At the end of 2017, when the price of the coin was the highest, many customers were looking for it. It was necessary to order dozens of mining machines.” Hou Beichuan recalled, “Most people are listening to Sichuan accents, they are all first-hand goods, refreshing. Very good."

The splicing effect followed. Some gamers quickly exposed that their new graphics cards purchased in physical stores and even Jingdong and other e-commerce platforms have shown signs of use.

Some people suspect that the graphics card manufacturers have joined the mining industry, and even sold the mine's graphics card in a new name.

Since then, Jingdong quickly closed the seven-day unreasonable return service of the graphics card products, in case someone bought the graphics card for mining for seven days before returning. But what gamers are most worried about – graphics card makers mining, but it seems to be a reality this year.

At the beginning of this year, the Hong Kong-listed company Baineng Group (HK.01263), which is mainly engaged in the design, development and manufacture of graphics cards, was exposed by the media to enter the mining industry.

The company is the owner of the well-known graphics card brand "Suotai" "Sapphire", while producing graphics cards based on the two giants of GPU – NVIDIA and AMD chips.

In January of this year, the company announced that its wholly-owned subsidiary, “Bai Neng Fortune” and its partners have established joint ventures in mainland China, engaged in server leasing, cloud computing and deep learning projects.

However, according to media reports such as the Planet Daily, the cloud computing business of the Baineng Group is actually a graphics card.

“The timing of the entry of the Baineng Group into the mining circle is already the lowest point in the mining industry.” Sun Yuan, a researcher at the blockchain, said, “This is more like a bargain-hunting.”

In his view, compared with Bitcoin's mining mechanism, the scale of graphics mining is smaller and the capital threshold is lower. But because of this, in the face of the industry cycle, the impact of the graphics card miners is more obvious.

"They have limited financial strength and are easy to chase up and down, and form a stampede effect." Sun Yuan said, "Many people are rushing to enter the market, and the price of the currency has dropped and hastily sold the miners, and most of them suffered heavy losses."

Like Bitcoin, the cyclical change in the price of coins is still an important factor affecting the mining of graphics cards.

“When the currency price is the highest, Ethereum can mine back in 3 months.” Hou Beichuan said, “At the lowest time, don’t think about returning to it in two years.”

However, in the view of many graphics card miners, despite the low funding threshold, there is no need for miners to develop special chips. However, the requirements for graphics mining and mining, such as technology and operation and maintenance, are even higher than bitcoin mining.

“Bitcoin mining has mature mining machines and fool management software.” Hou Beichuan said, “As long as there are people, funds, and low-cost electricity prices, anyone can do it.”

But the graphics mining is different.

"In the early years, the graphics card miners were 'rack' mining, the heat dissipation efficiency is low, the maintenance is difficult, and there are also hidden dangers." Hou Beichuan said, "Later, the professional graphics card mining machine continued to appear, and the video card mining was gradually on the right track. ” 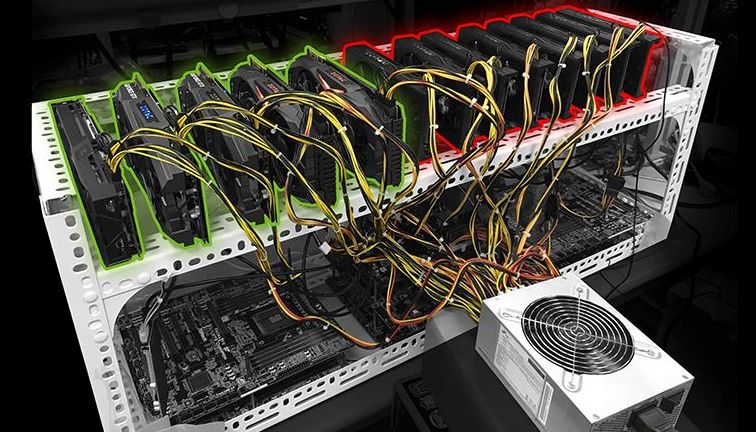 Hou Beichuan showed off a graphics card mining machine he designed. The shape of the miner is a rectangular parallelepiped with a high power supply of up to 1700W and supports 8 graphics cards for simultaneous mining.

A common graphics card mining machine on the market

“So we contacted the graphics card manufacturer and customized a number of graphics cards without fans.” Hou Beichuan said, “We will install a high-power fan on the side of the mine to achieve better heat dissipation.”

Compared to the bitcoin miners who live on the "by-electricity price", the graphics card miners prefer a stable power supply. But many mines are not willing to host video card mining machines.

“Some video card mines switch between multiple currencies and choose the currency with the highest revenue. This requires miners to have convenient batch management software.” Lao Zhao said, “So, the carding fee of the card mine is better than Bitcoin. The mining machine is much higher."

The lower risk tolerance and higher technical barriers have caused the graphics miners to worry. But what they are more worried about is the increasingly uncertain industry prospects of video mining.

To this day, Ethereum is still the most popular currency for video card miners. However, according to the development roadmap of Ethereum, Ethereum will abandon the mining mechanism of PoW and gradually turn to PoS.

In fact, similar scenes have been staged in video card mining.

In the middle of 2018, many 1063 graphics cards (3G memory version of the GTX 1060 graphics card) miners suddenly found that their mining machine power, for unknown reasons have returned to zero.

This means that all 3G memory versions of the graphics card have been unable to participate in Ethereum mining. A group of miners were thus eliminated.

However, in the Ethereum mining field, the performance of ASIC mining machine manufacturers is not satisfactory.

As early as last April, Bitumin launched the mining machine ant E3 for the Ethereum Ethash algorithm. However, it has a flat performance and has little advantage in mining cards. Today, the Ant Mines official website has removed this product.

Jia Nan Zhizhi announced the development of the Ethereum ASIC mining machine last year and plans to release it in April this year. However, with regard to this mining machine, no new news will be released thereafter.

A number of graphics card miners expressed a blockchain. To this day, the Ethereum mining ore mine is "only known" and has not seen its body.

Despite the uncertain future, in the eyes of many miners, graphics mining is still a market where opportunities and risks coexist.

"In history, there have been many opportunities for 'profiteering' in mining video cards." Lao Zhao said, "At the end of last year, the emergence of Grin was one of them."

In the early days of Grin's birth, many well-informed miners participated in the mining of Grin. In the early days, Grin's currency price was more than 100 yuan, and many miners were profitable.

Not only Grin, many small currencies have experienced similar situations in a short period of time.

However, in the face of the temptation of small currencies, most miners are still unmoved.

The miners are most worried about the air currency.

"For miners, stability is the first." Sun Liang said, "After all, we are just miners, we never speculate."

On the one hand, the ASIC mining machine is on the rise, and on the other hand, it is still unclear prospects. The shoulders of the graphics card miners are not heavy.

However, the mining of graphics cards is still regarded by many as one of the means to defend the decentralization of the blockchain world.

Four reasons tell you that…