The crisis of money: What is the meaning of understanding? What is the relationship with Bitcoin?

Friends who have not understood economics should not be very clear about this reason. I will explain it briefly. In fact, there are many factions in economics. The more mainstream ones are the Chicago School, the Austrian School, and Keynesianism. Apply a description to simply let you know the difference between these schools:

"1. Chicago School: Fully maintain market competition, and do a good job as a referee. It is like a teacher who watches children play games and smoke outside the classroom.

3. Keynesianism, the economy can't be done without government control, or it depends on the government to save! ”

Simply look at the "service tenet" of these factions. I believe that you can see at a glance which faction is more liked by governments around the world.

As the "Audio's best cryptocurrency experiment" – Bitcoin, it is hoped to replace the legal currency system that disappoints people.

There are still a lot of opposing voices such as: "When the French currency is good, why should it be replaced?"

Then the question is coming, is the currency really good? Of course not. There are several key issues in the currency, including the impact of inflation caused by endless currency overspending on the wealth of the people, and the fact that the national debt brought by unrestricted currency is a complete Ponzi Scams, etc., have caused people to question the "credit currency" that is not old or old-fashioned.

But in fact, what really deserves the attention of life is not only these "silent harvests", but also "real disillusionment" – the currency crisis.

The currency crisis is generally seen as part of the financial crisis. A more common definition is the nominal depreciation of at least 25% of the currency, or the violent fluctuations of a depreciation of more than 10% over a short period of time.

Why "financial crisis", "economic crisis" and even "subprime mortgage crisis" "European debt crisis" These terms are heard very frequently, but in my eyes, the more terrible "currency crisis" is rarely heard by everyone. Because these crises are all the countries that are attracting attention from the world, the United States and European countries, and the currency crisis is often a small economy, or a country or region that does not appear in the eyes of the world, so it is for domestic non-professionals. In fact, the currency crisis does not seem to happen very often.

However, the currency crisis actually occurs very frequently, and the financial crisis does not happen very often. In less than five years from 2014 to 2019, more than 60 countries met the definition of a currency crisis. If the timeline is stretched again, there have been more than one hundred countries in the past three decades.

In fact, it is very frequent.

Once the currency crisis occurs, the worst victims are often ordinary people who are not greedy, diligent, and have not done anything wrong.

Just like India’s previous banknote movement, there would be no property allocation, no real estate, stocks, gold, or even ordinary people who would not deposit money in the bank. Their life savings are only a few thousand denominations, one night. Between the two, many people, even on the way to the bank lined up, no longer wake up.

In the international market, the Indian currency has become a joke:

Many people think that the collapsed currency crisis in countries like Venezuela, Zimbabwe and Iran will not appear on us, so it is useless to prepare bitcoin, but it is not. Bitcoin, as a globally recognized “crisis currency”, will have a huge positive for Bitcoin regardless of the “decent” currency crisis in any major economy. In the long run, the crisis will continue to happen, which is why we firmly hold Bitcoin.

Next, I want to give a model of several famous currency crises in history (both large economies), as a case to explain why the currency crisis will continue to occur, and not in small economies (small economies) There are dozens of which have happened in recent years).

Late at night on December 19, 1994, the Mexican government suddenly announced that its currency depreciated by 15%. This decision detonated the market and people sold it wildly. With the devaluation of the peso, foreign investors withdrew a large amount of funds, and Mexico’s foreign exchange reserves fell sharply by nearly 4 billion dollars in two days. In the short three days after the Mexican government announced its depreciation, the exchange rate of the Mexican peso against the US dollar plummeted by 42%.

The exchange rate has depreciated by 42% in three days. Do you think foreigners are willing to do business with Mexicans? Are investors dare to invest? So the Mexican economy collapsed.

Generally speaking, the signs of economic collapse in capitalist countries are all stock market collapses (because China is not a capitalist country, so the economy is good or bad, and A-shares are not good). The impact of capital outflows on the Mexican stock market was huge. After a week of exchange rate collapse, the Mexican IPC index began to fall, falling 6.26% on the first day and 11% on January 10 after half a month.

This is also the standard case I said "a collapse of a country, often starting with a currency collapse."

Of course, Mexico has not slowed down since: 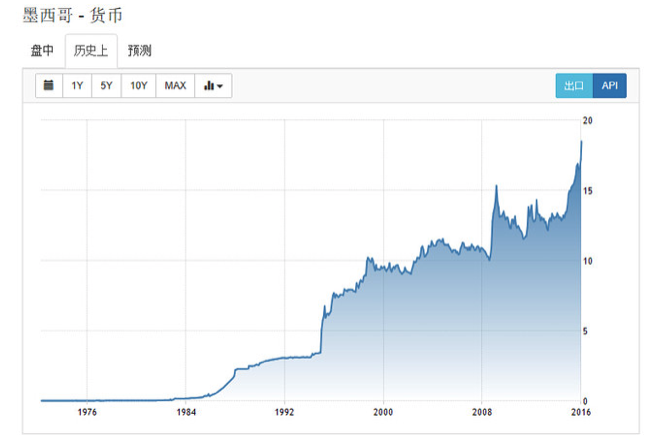 The economy that has been booming in the economy has become what it is now. Everyone knows what it is… I am sorry for it.

Simply talk about this storyline: Asia in the 1960s and 1970s after the Second World War began to develop from the shadows of the past and entered the industrial and financial era. After the completion of the foundation, in the 1980s and 1990s, several countries in Asia began to take off, including the "four little dragons" and "four little tigers." The rapid development of Asian countries naturally adds “leverage” to the economy, that is, high debt, and it is a dollar debt.

Many people think that Soros is the chief culprit of the Asian financial crisis. In fact, the abnormal economic development and uncontrolled currency overshoot are the real culprit of the currency crisis. Soros is just an ordinary person who dares to dismantle the "new clothes of the emperor". People are gone.

The ruble crisis in Russia has actually been many times. Even in the past 2018, the ruble has depreciated by 20%. 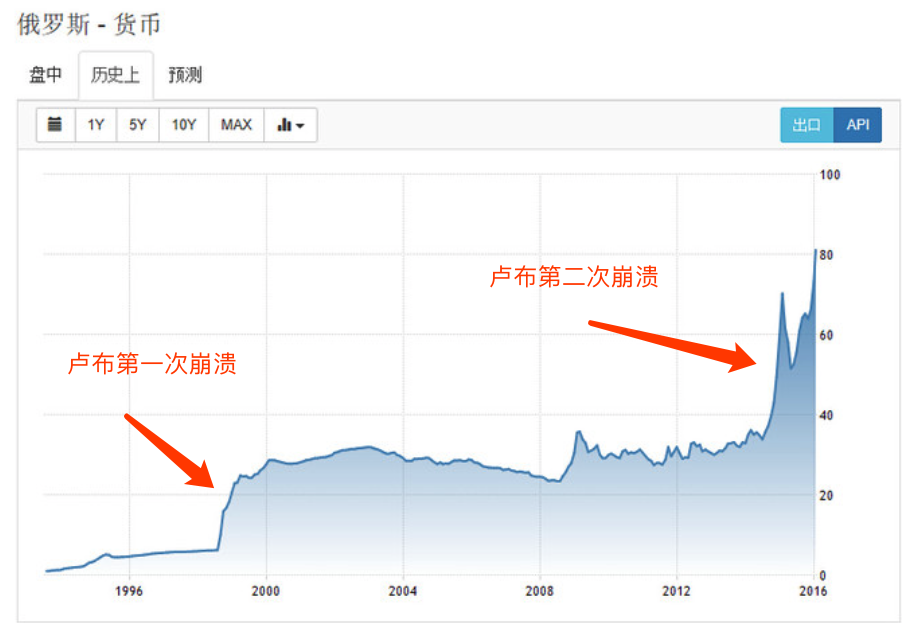 When the Soviet Union just disintegrated, the ruble had a sharp devaluation. (In the part of the figure before 1996), because of the painful period of socialism turning to capitalism, Russia implemented "shock therapy", which proved to be ineffective and brought a very miserable inflation to Russia. .

In 2014, it was caused by oil sanctions that directly led to the collapse of the ruble. I believe that everyone still has the impression that for a while in the past few years, everyone has set off a wave of buying things in Russia, such as the iPhone, because the devaluation of the ruble has caused the Russian iPhone to be twice as cheap as the domestic one. Of course, it didn't take long for Apple to raise prices.

This is the power of the currency crisis. As long as the exchange rate is in trouble, the things you need in your life will immediately have problems. (Especially, food dependence on imports will cause a fundamental problem of people's livelihood, because the ups and downs of rice and oil are the most serious damage to the people).

Perhaps the economy has been sluggish, and the gap between the rich and the poor is getting bigger and bigger. Is it why old Maozi doesn’t want to struggle and only loves to drink?

Fourth, Argentina, Turkey, Brazil and other dozens of countries, 2018.

In fact, in addition to the above-mentioned typical examples, there are countries such as Argentina, Turkey, Brazil, etc. in recent years (in dozens of countries with currency crises in the past five years), and economic problems caused by currency crisis. Frequent, debt crises and small financial crises are knocking on the door every day.

Argentina actually had a currency crisis in 2002, but it was caused by the debt crisis, let alone talk about it. In recent years, Argentina’s currency depreciation has been five times that of five years (0.12 to 0.023):

Turkey is not good enough. The currency has depreciated nearly three times in the past five years.

In the past few years, the “emerging” economies have been continually experiencing a currency crisis. In fact, the depreciation of the legal currency has released the upper-level economic pressure to the ordinary people, so that the economic structure can be maintained.

The worst is always the people.

In addition, I have seen some articles, and I also talk about the possible crisis of China's currency. This should not be able to talk more and send a picture. Everyone can experience it. If it can't, then nothing happens. After all, the RMB is still Very stable. 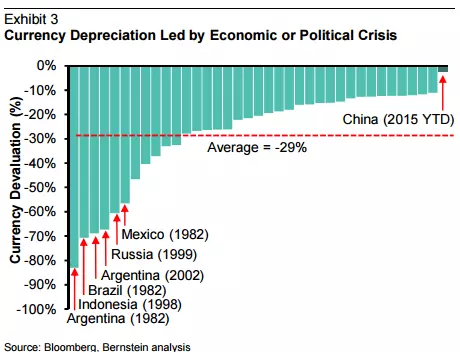 Above, I talked about the currency crisis. The main purpose is to let everyone know that although our current economic volume and national strength can guarantee that it is difficult for us to have a currency crisis, the fact is: in addition to the US dollar, the Japanese yen, the euro and the renminbi, the rest of the world is always There is a possibility of a currency crisis, after all, one quarter (or more) of them are experiencing a currency crisis.

Finally, why do we understand the currency crisis?

Because every currency crisis occurs, it is the best advertisement for Bitcoin.

How does Defi build its own encryption community in the face of the traditional financially rooted community?

Will the next DEX supporting 100x leverage really stand out?