Bitcoin failed to form an effective breakthrough in 8130, and the market outlook still needs to be observed.

Before yesterday (Tuesday), Bitcoin did not go up to 8130. From the trading range, Bitcoin has 8 days to trade in the 8130–7435 range. The market is in the interval where the long and short sides are tug-of-war. Last night, Bitcoin stood on the 8130. In the original sense of the long-term victory, the market should have achieved a breakthrough in technical follow-up, quickly pushing up the price and staying away from the resistance of the 8130. However, the actual situation of Bitcoin trading yesterday was that when the price broke through 8130, the upside was only a few minutes, and the highest hit 8273 fell back to 8180 sideways. Today (Wednesday) morning, Bitcoin is located at 8130. This shows that the market has broken through the horizontal resistance and has not been recognized by the mainstream funds, and has not followed the trend of funds to enter the market. Even if there is, it is very small. In fact, after breaking through the 8130 level, the time for Bitcoin to go up is still very short. There is reason to doubt that the main reason for yesterday's (Tuesday) night's pull-up to break through 8130 is to remove the short position of retail investors at 8130 (the resistance is too obvious at 8130), and the second is to induce retail investors to think that they are effective. Break through 8130, go chasing the high pick, the main opportunity to distribute. Therefore, yesterday, bitcoin will break through the 8130 probability and form a false breakthrough.

From the overall trend of Bitcoin, on the day of May 30th, the K-line broke through the line, basically forming a short-term top of Bitcoin. At that time, it was a big probability to end the upward trend in April and May. Until the beginning of June (June 3, 4), the K line has two big Yinxian lines, and after falling below the 20-day moving average, it can be determined that the rising trend has been destroyed. However, after the end of the uptrend/destruction, the normal thinking, the market should enter the downward trend of the downward trend. In the first four months of May, the increase in bitcoin has accumulated a large increase. After the trend is destroyed, a considerable portion of the long-term profit will be poured out. . However, in the first 9 days, Bitcoin carried out a side-by-side sorting. In fact, the market's long selling pressure (ie, short energy) was not fully released.

If the callback from the bitcoin blocked at 9111 is seen as a new downward trend, personally think that the down time of the callback is too short, mainly on the day of May 30 and the two days of June 3 and 4, at the same time, callback The space is not in place. Therefore, yesterday (Tuesday) night, even if bitcoin broke through 8130, the market did not buy to follow up, indicating that the price after breaking through 8130 did not have an advantage. The market still has a wait-and-see attitude.

Last night, Bitcoin broke through 8130 and the time has passed. The market has not yet been bullish and willing to follow up. If the time drags on for too long and it is more unfavorable for the bulls, then the above-mentioned false breakthroughs will be suspected of a high probability. Bitcoin will soon fall back below 8000. From the bitcoin 1-hour K-line chart, if the trend line (the oblique white line) that has rebounded this week is damaged and the price falls below 7900, then Bitcoin continues this trend on May 30. Was hindered by the downward trend of the 9111 callback. Because Bitcoin once again fell below 7900, while the lower horizontal support is still at 7435, there is still a lot of downside. Yesterday (Tuesday) Bitcoin Day K line is the Zhongyang line, but individuals do not recommend to follow the trend, the steady people will wait and see. The radicals bet on a strict stop loss of 8273 (yesterday's highest). Yesterday (Wednesday) ETH station on the 254.4-256.3 interval pressure, this morning was blocked at 266.6 (according to yesterday's expected 265-268 block blocked), ETH stopped from 225.8 at the beginning of the week and stabilized to rebound to the highest level of 266.6 this morning, just ETH fell back to 225.8 in 297, and there is no obvious trend for the time being. In the future, ETH will have repeated trends around 250. Taking into account the linkage between ETH and Bitcoin, the subsequent trend will follow the trend of Bitcoin more. 268 is the obvious resistance of ETH (this price is also the break point of the decline callback since the beginning of June). Lower support 250; 237; BCH's recent convergence triangle has not been effectively broken, with the upper horizontal resistance 411; the lower support 369. Since the convergence finishing interval is followed by the end of the rising trend, it is still a falling relay pattern. If it falls below 369, it will further open the downside. The short position of the short position on the rallies is above the maximum stop loss 411. 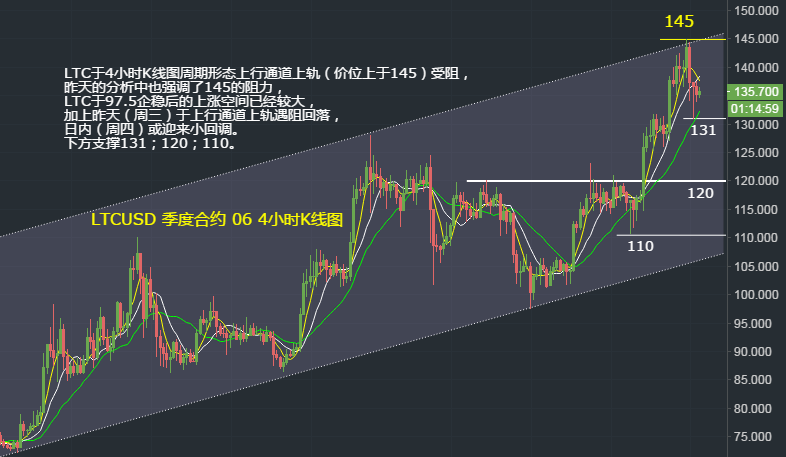 LTC was blocked on the 4-hour K-line chart cycle form on the upper channel (at the price of 145), and yesterday's analysis also emphasized the resistance of 145. LTC's upside potential after 97.5 stabilized has been large, and yesterday (Wednesday) on the uptrend channel on the upper rail blocked the decline, due to the LTC main trend is the upward trend, yesterday (Wednesday) after 145 blocked, the technical side may also be relative High-level finishing or a small correction, the probability of continuing to innovate high during the day is small. The above analysis only represents the analyst's personal opinion, not as the basis for the market entry!

Futures trading is a high-risk speculative behavior with leverage. Any fluctuation in the opposite direction between different communities may result in considerable losses or even bursts under the leveraged trading. How to save lives in trading losses is more reflected in risk control and position management. Successful investment transactions require the analysis of predictions, timing choices, and fund management.

Founder of Lightning Torch: According to the current growth rate of bitcoin computing, halving or advancing to April next year